Montis qualify for sectionals with an epic win over Beacon

MONTICELLO – Turning 21 marks a coming of age. And the Montis did just that, with an uncanny 60-55 division win over Beacon. That magic number, that traditionally marks the rite of passage into …

Montis qualify for sectionals with an epic win over Beacon 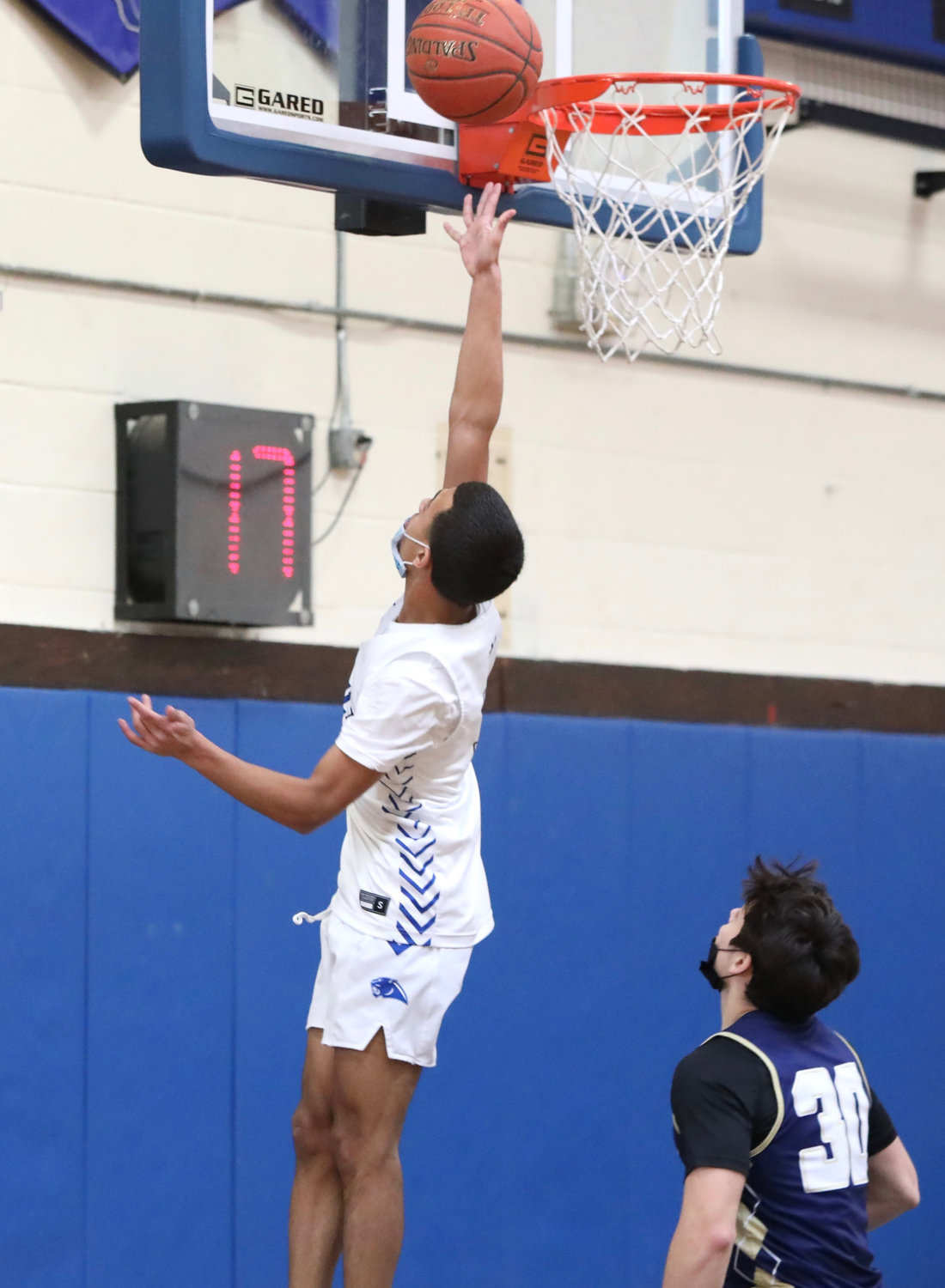 Monticello senior captain Pedro Rodriguez slashes to the rim with two of his game-high 25 points that included a pair of threes and hitting seven-of-eight from the stripe. He had 10 of Monticello’s first quarter points as they jumped on the Bulldogs 15-3 by the end of the quarter.
Richard A. Ross | Democrat 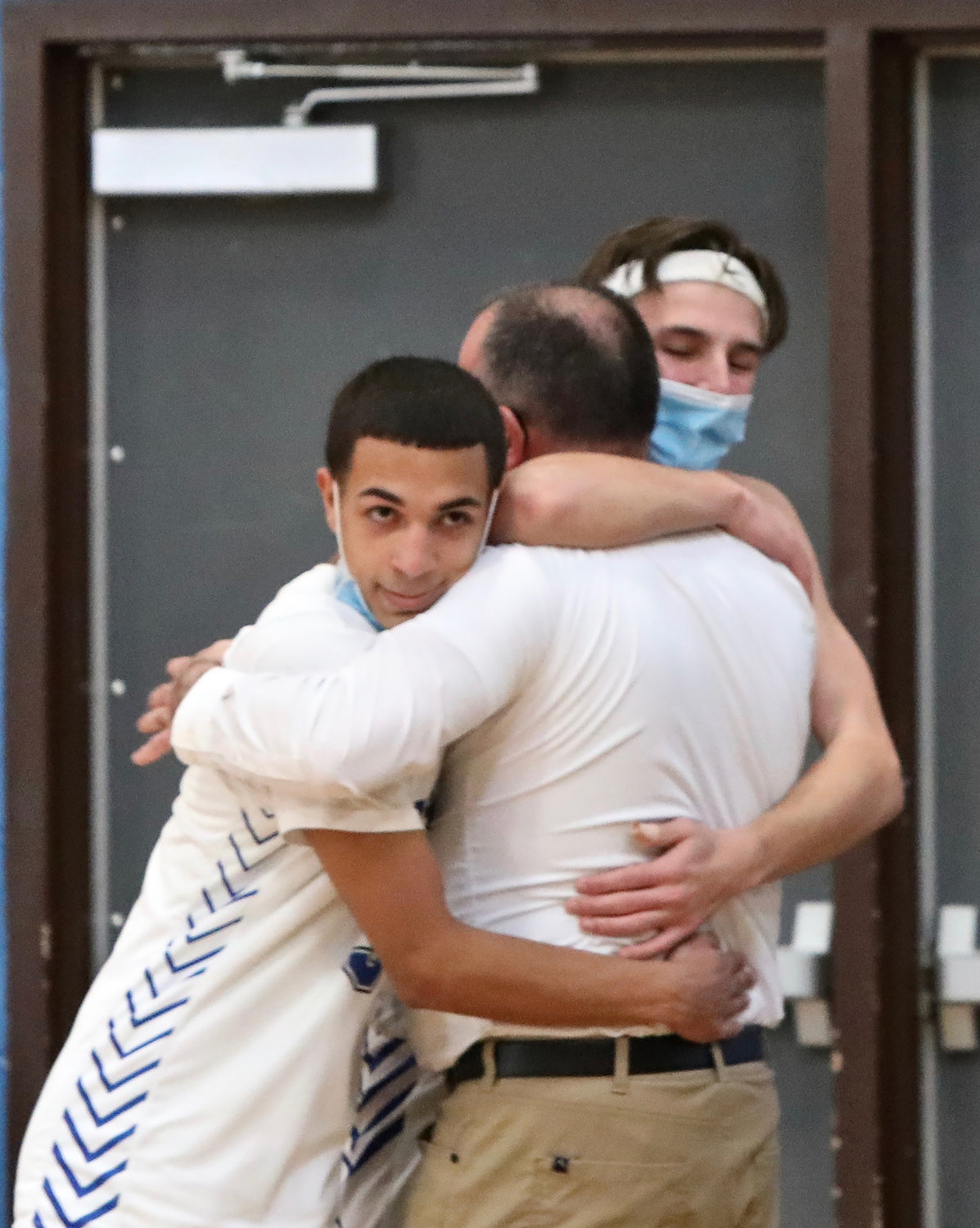 Coach Chris Russo gets an emotional hug from his son Joseph and star guard Pedro Rodriguez. Russo has such great rapport with his players who respect him immensely. Making it to sectionals was a season-long goal.
Richard A. Ross | Democrat
Previous Next
Posted Tuesday, February 8, 2022 6:20 am
Richard A. Ross

MONTICELLO – Turning 21 marks a coming of age. And the Montis did just that, with an uncanny 60-55 division win over Beacon. That magic number, that traditionally marks the rite of passage into adulthood, in this case came to signify the Panthers qualifying for a 21st game to the season, a sectional game, something Coach Chris Russo has pointed his team towards the entire season. “Twenty-one!” has been the rallying cry throughout the season, and it reached its maximum amplitude this past week following an uplifting home win over Cornwall. That repayment of the Dragons for an early season drubbing meant only one more division victory was needed to assure a .500 league record. With a trio of league games remaining, including a road clash with Goshen and home games against Beacon and Port Jervis, the Montis knew their home match against the Beacon Bulldogs, another team that hammered them on the road, would be their first chance to close the deal. And they did, getting out to a blistering 15-1 lead that resulted in a 15-3 first quarter bulge.

Senior Captain Pedro Rodriguez led the early charge with ten of those points. He’d score a game-high 25 before the emotional catharsis. But there was little chance that Beacon would just roll over. Coming in with a 7-1 league record and 10-5 overall, Beacon had its sights set on a possible two-seed in the upcoming sectionals. Having handled the Montis with ease the first time out, one might have presumed this game to be another notch in the gun. But getting in a deep hole early, the Bulldogs showed their mettle and significantly righted the ship in the second stanza to close the lead to five at the break, 24-19.

Prior to elucidating the second half narrative, a little background about Beacon brings the lens into sharper focus. The Bulldogs moved into Section Nine this year from their prior home in Section One. Unlike Monticello, which played only two games last winter due to Covid, Beacon played 11. Of which, they prevailed in just one. With perennial heavyweights like Poughkeepsie and Tappan Zee, the competition overall was much more daunting than Section Nine. Coach Scott Timpano returned all but three of his players and the sectional move has thrust them into a much better position than they were in their prior milieu.

Their plan was to deploy their aggressive man-to-man defense against Monticello but that plan was shelved after the first quarter in lieu of a two-three zone. Over the years, Monticello has been one of the hardest teams to defend one-on-one. With Rodriguez and Michael Mingo’s ability to slash to the rim, coupled with the outside threat of Joseph Russo and the immeasurable value of forward Dylan Hardy, that task becomes harder. Nursing that tenuous five-point lead heading into the third quarter, Monticello rebuilt their edge to 12 as they took a seemingly solid 43-31 margin into the final stanza.

Understandably, the Bulldogs weren’t ready to throw in the towel and they caused turnovers and made shots and whittled what at one point had been a 14-point lead to as little as four. Good teams weather the storm, and Monticello once again showed its mettle with timely threes from Russo (his second of the afternoon) and Danny Cano. Hitting nine of ten free throws in the frame helped preserve the eventual 60-55 momentous win.

As part of the Rodriguez resume, he hit seven of eight from the stripe. Overall the Panthers were a rock-steady 16-for-21 from the stripe (76%). Beacon, who normally lives at the line was just nine-for-17 (53%). Monticello was bolstered by 11 points from Russo and a relatively quiet seven from Mingo.

Coach Chris Russo loves his team’s resiliency and toughness. He refers to Dylan Hardy as the anchor of the defense. Russo notes, “Dylan has taken more charges in one year than I’ve had teams take an entire season.” Talking about the flow of the game, Russo added, “We came out fired up and ready to go.”

As to Beacon’s getting back in the game in the fourth quarter, he averred, “We helped them lower the lead. We preach meet the ball with hands, eyes and feet. It’s when we get loose with the ball that we get into trouble.”

Timpano credited the Panthers. “We allowed them to get to the basket too much. They played better than we did.” In the end, Beacon, like its namesake, lit the way for the Montis to pass through the gates into the postseason. Monticello improved to 9-8, (6-4).

This coming week Monticello will face Liberty at the BCANY Coaches vs. Cancer classic for a non-league tilt before entering the last week of the regular season to take on Goshen on the road and then host their Senior Night game vs. Port Jervis.