Late in the afternoon on February 13, 1907, the boiler exploded on an O&W passenger train just before it reached Luzon Station in Hurleyville. Two railroad men were killed instantly in the … 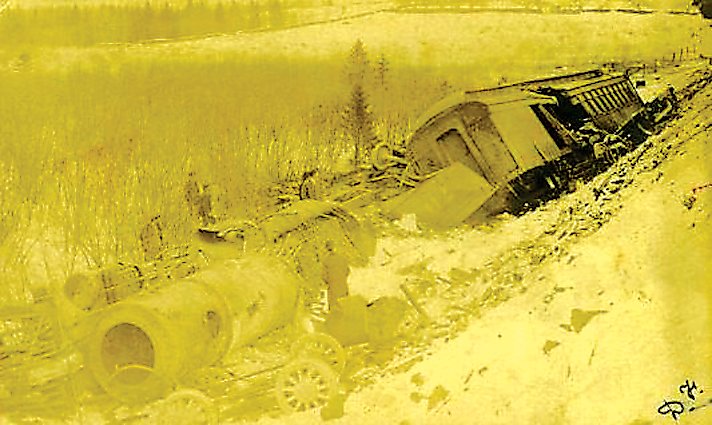 Part of the wreckage of the O&W passenger train that exploded near Hurleyville on February 13, 1907.
Contributed Photo
Posted Friday, October 28, 2022 12:00 am
John Conway

Late in the afternoon on February 13, 1907, the boiler exploded on an O&W passenger train just before it reached Luzon Station in Hurleyville. Two railroad men were killed instantly in the explosion, the train’s engineer was severely injured and would die a few days later, and two crewmen and twelve passengers were hurt when the train careened off the tracks.

The force of the blast sent pieces of the train and the bodies of the dead crew members hurtling through the air, landing hundreds of feet from the scene. The engine’s bell was not found until nearly a month after the explosion.

According to contemporary newspaper accounts, the engine was drawing the No. 3 train, “one of the finest on the road” and was doing about 40 miles per hour when “suddenly there was a terrible roar and the sound of ripping and tearing of iron. The train of cars rammed the wreck and four of them left the rails. When the steam cleared, there was nothing but scrap iron left of the locomotive.”

The train had originated in Weehawken, N.J. around noon that day, heading for the mountains with about 50 passengers. It had pulled out of Middletown at about 3 p.m., and had just emerged from the Smith Hill Cut when the explosion occurred. The train was within sight of the station at the time, and some accounts of the day noted that passengers waiting for the train had seen it approaching in the distance and then watched in horror as it was engulfed in smoke and steam.

Some had initially suspected that dynamite had caused the explosion, and stories circulated that either intentionally or by accident the dynamite had been mixed in with the coal that was being used to feed the boiler. The railroad eventually debunked that theory and suggested instead that the water lines feeding the boiler had frozen, causing the boiler to run low on water and to overheat. That overheating then thawed the lines, allowing cold water into the boiler and causing the explosion.

A more thorough investigation into the incident seemed to rule out that theory, and no official determination has ever been made as to the cause of the explosion and subsequent wreck.

The body of the train’s engineer, William Gadwood of Walton, NY, was discovered more than 100 feet from the wreck. Gadwood was alive, but severely injured when found, his skull fractured in several places, and he died shortly afterward. The mangled body of fireman Martin Mullen, who was believed to have been killed instantly in the explosion, was found 100 feet in the opposite direction. A third man, later identified as O&W employee J.D. Vulquette, was also killed in the explosion.

In the years following the train wreck, tales have persisted about supernatural activity in and around the rock cut, and as recent studies reveal that more and more people believe in ghosts these days, they have resulted in the interest of a number of paranormal groups.

Since haunted places are often said to be places that are associated by the ghost with some strong past emotion, such as fear or remorse, or the terror of a vio-lent death, the Smith Hill Cut would certainly qualify.

The story of the gruesome 1907 explosion and its aftermath will be part of the first annual HO&WL Haunted History Walk on Saturday, October 29 at 5:30 p.m. in Hurleyville. This columnist, your Sullivan County Historian, will narrate a guided walk along the Milk Train Trail, the Hurleyville section of the Sullivan O&W Rail Trail, detailing this event from the railroad’s more ominous past.

The hike will originate at the trail head just off the municipal parking lot on the east side of Hurleyville’s Main Street.

Forest- or train-themed costumes are encouraged. Participants should bring a flashlight. Well-behaved dogs are also welcome; but must remain on a leash. Visit the event Facebook page at bit.ly/HOWLSullivan or call (845) 807-0531 for more information.