Historian Drew Shuptar Rayvis’ had the rapt attention of his audience at Fort Delaware last Saturday, not the least for what he was wearing. While the group absorbed the information Rayvis told … 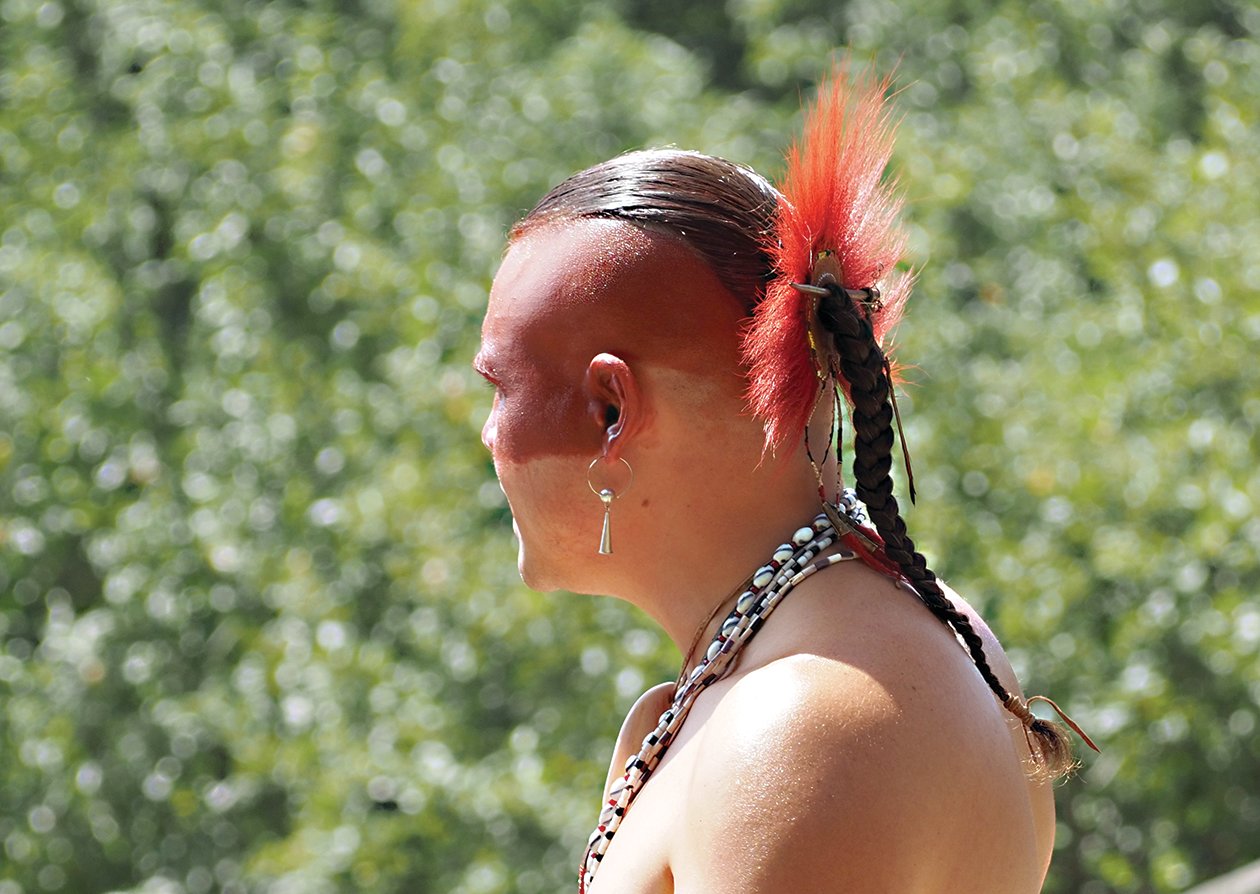 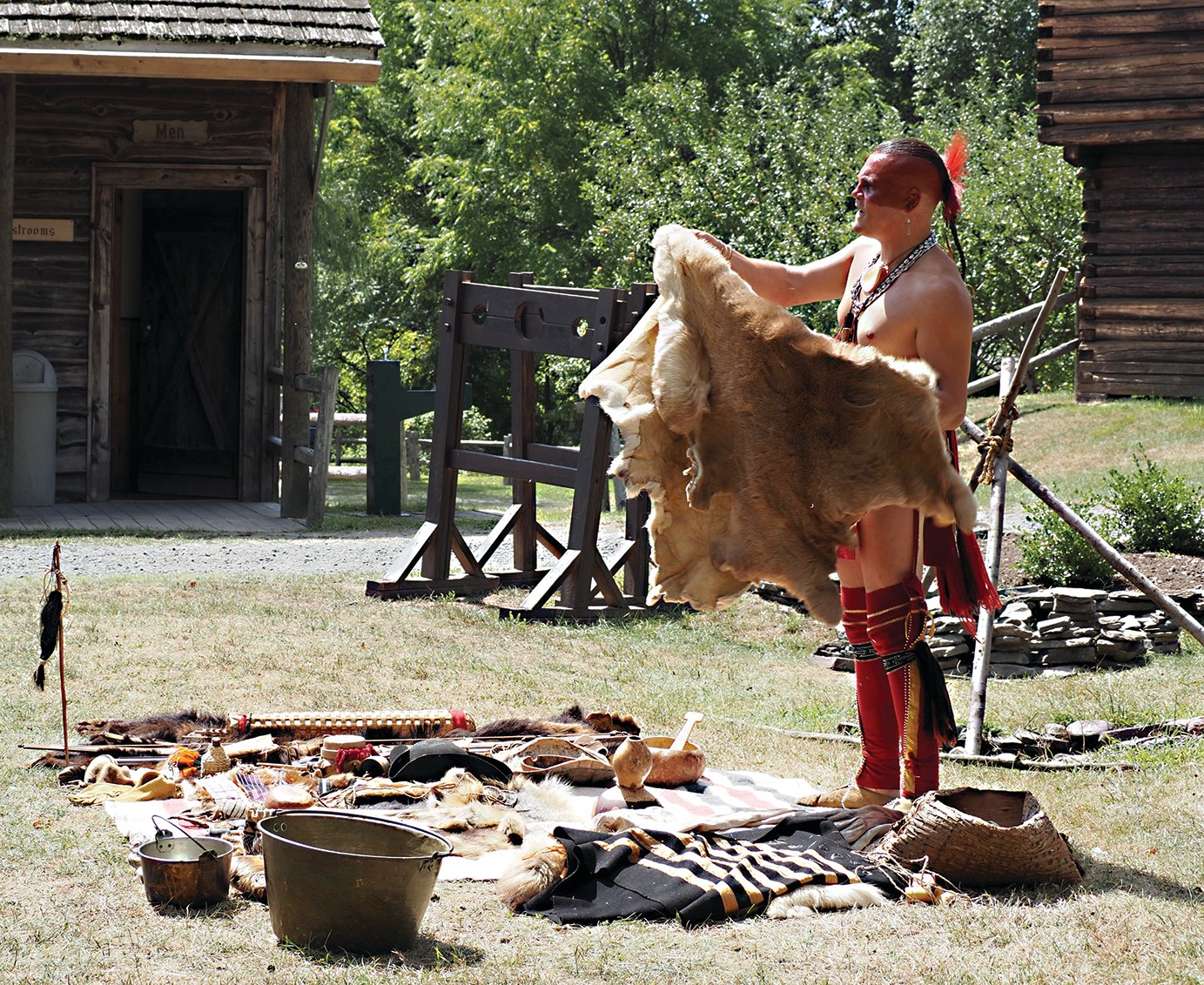 Historian Drew Shuptar Rayvis demonstrates how an animal skin can be draped for warmth in the winter.
Ruth Huggler | Democrat 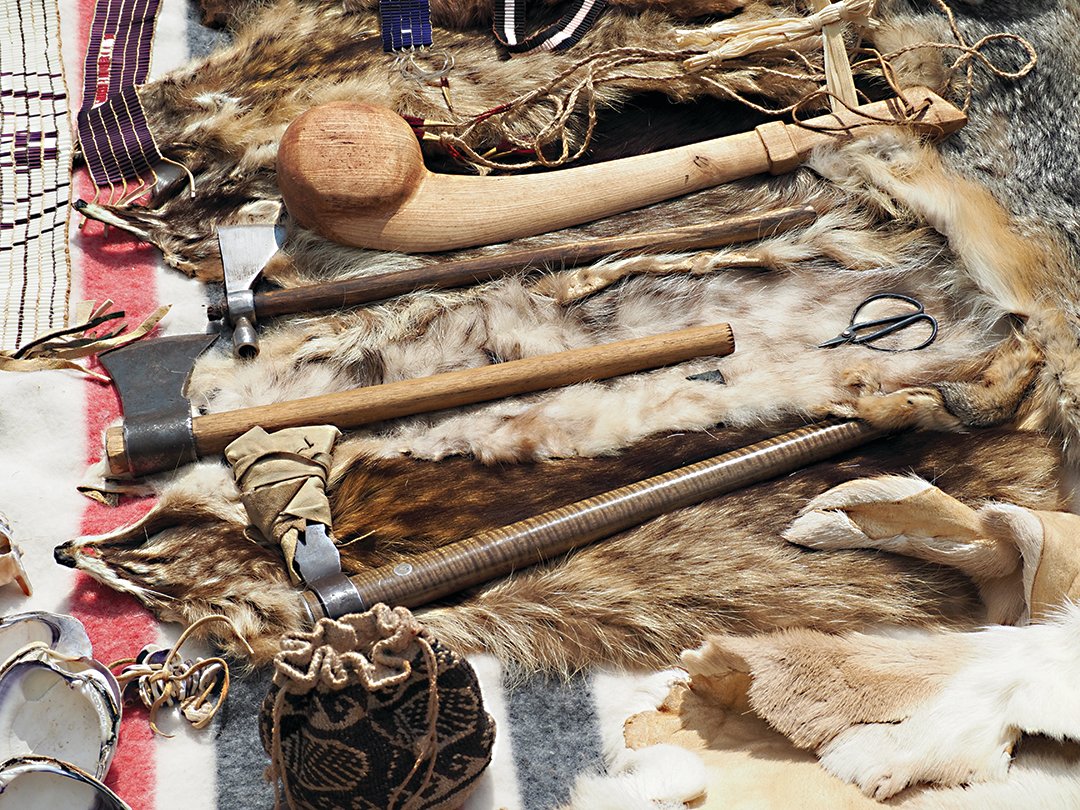 Among the items Rayvis showed the audience were wampum belts (upper left), a club made from the root of a tree, several “otomahuks” (from the Algonquian word “to knock down”), and shells to make beads from (lower left).
Ruth Huggler | Democrat
Previous Next
Posted Tuesday, August 23, 2022 6:10 am
By Ruth Huggler

Historian Drew Shuptar Rayvis’ had the rapt attention of his audience at Fort Delaware last Saturday, not the least for what he was wearing. While the group absorbed the information Rayvis told about the Algonquin people in the early 18th century, Rayvis soaked up the rays of the summer sun, dressed in a scarlet loincloth, leggings and moccasins, his hair decorated with scarlet plumes and the top half of his face painted a dark red. Rayvis explained that Native Americans wore few garments in the summer. No one envied the heavy animal fur he lifted to cover himself, showing how it was worn in the winter; it was not needed in Saturday afternoon’s sun.

More than 40 people gathered (under what little shade they could find), while Rayvis described the Native American and early European articles spread at his feet. He showed off his neck ornament, which he had crafted from a shell, saying it is like a gorget worn by officers in the French and Indian War. A belief of some Natives was that such objects and amulets were apotropaic – giving the wearer the ability to ward off evil spirits or harm. The Algonquin, he explained, were animists: they believed in all objects having “life,” or a soul, and that the spirit world animated physical objects.

Rayvis said that the European settlers’ influence on indigenous people dramatically changed the latter’s way of life. As a means of survival, many of the Algonquin people intermarried with the European settlers, adopting the Christian religion and European culture. As a consequence, deep knowledge of indigenous culture nearly disappeared. Some descendants of Native Americans have been surprised to discover their Native heritage, because it was not spoken about in earlier generations.

Rayvis is from western Connecticut, and he has Accomac and Pocomoke ancestors as well as European ones. He is actively learning Renape and Mahican languages, which he used to introduce himself to the audience. Chosen as cultural ambassador of the Pocomoke Indian Nation a year ago, his Native name is Black Corn. He is a living history lecturer and re-enactor, with a background in anthropology and sociology. After answering questions from the group for over two hours, Rayvis could have continued, if not for the sun driving away the shade.

The presentation was sponsored by the Bold Gold Media Speaker Series. Remaining events are The Cushetunk Spy with John Conway on Sept. 3, and Richard Mandelbaum’s program on 18th century herbalism on Sept. 10. For more information visit https://thedelawarecompany.org.