Alone at the top

ELDRED –– Continuing the trend of their last three games, the Blue Devils once again defeated a league rival, and have a perfect 4-0 record in the division.

The Blue Devils traveled to …

Alone at the top 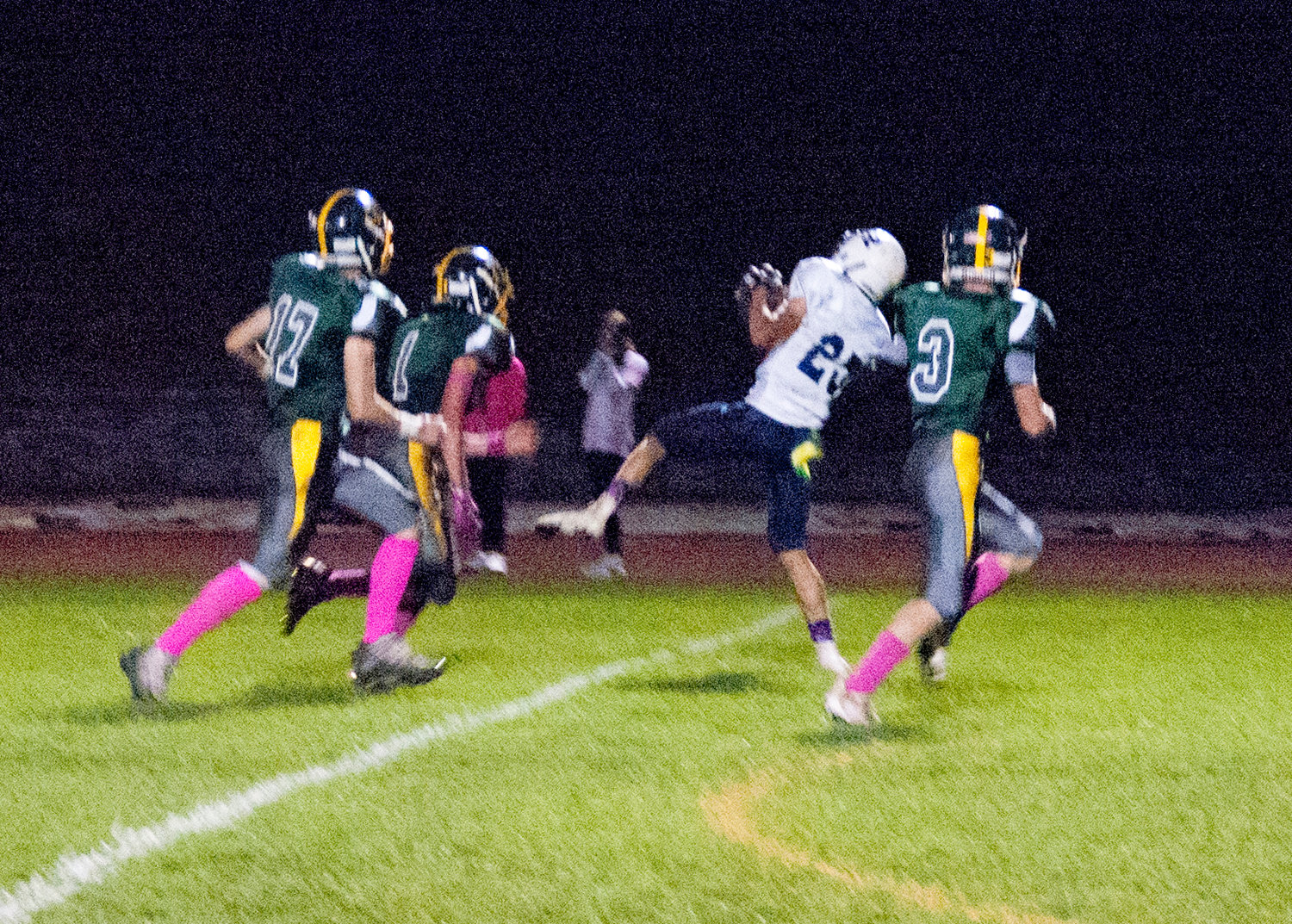 Go up and get it! Senior Ben Ackerly goes up for the ball between three defenders after a perfectly thrown ball by Anthony Teipelke. This reception was good for 21 yards and a first down.
Anthony Morgano | Democrat 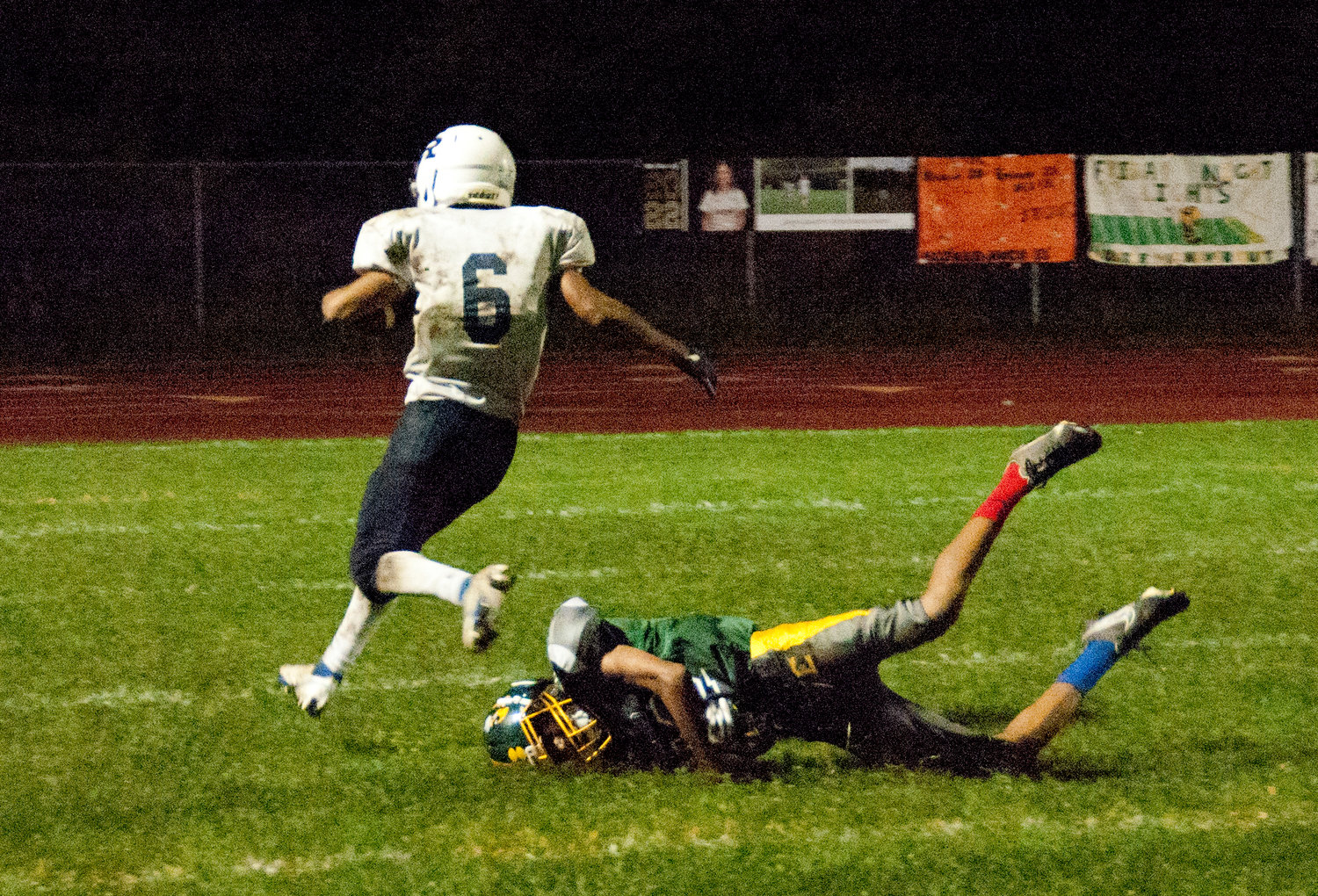 Alaniz Ruiz breaks away and sheds an Eldred defender for his second score of the day. Ruiz dominated on the ground, running for 178 yards and two touchdowns. The Blue Devils defeated Eldred 26-0 and are hoping to continue that momentum when the Bulldogs come to town next week.
Anthony Morgano | Democrat 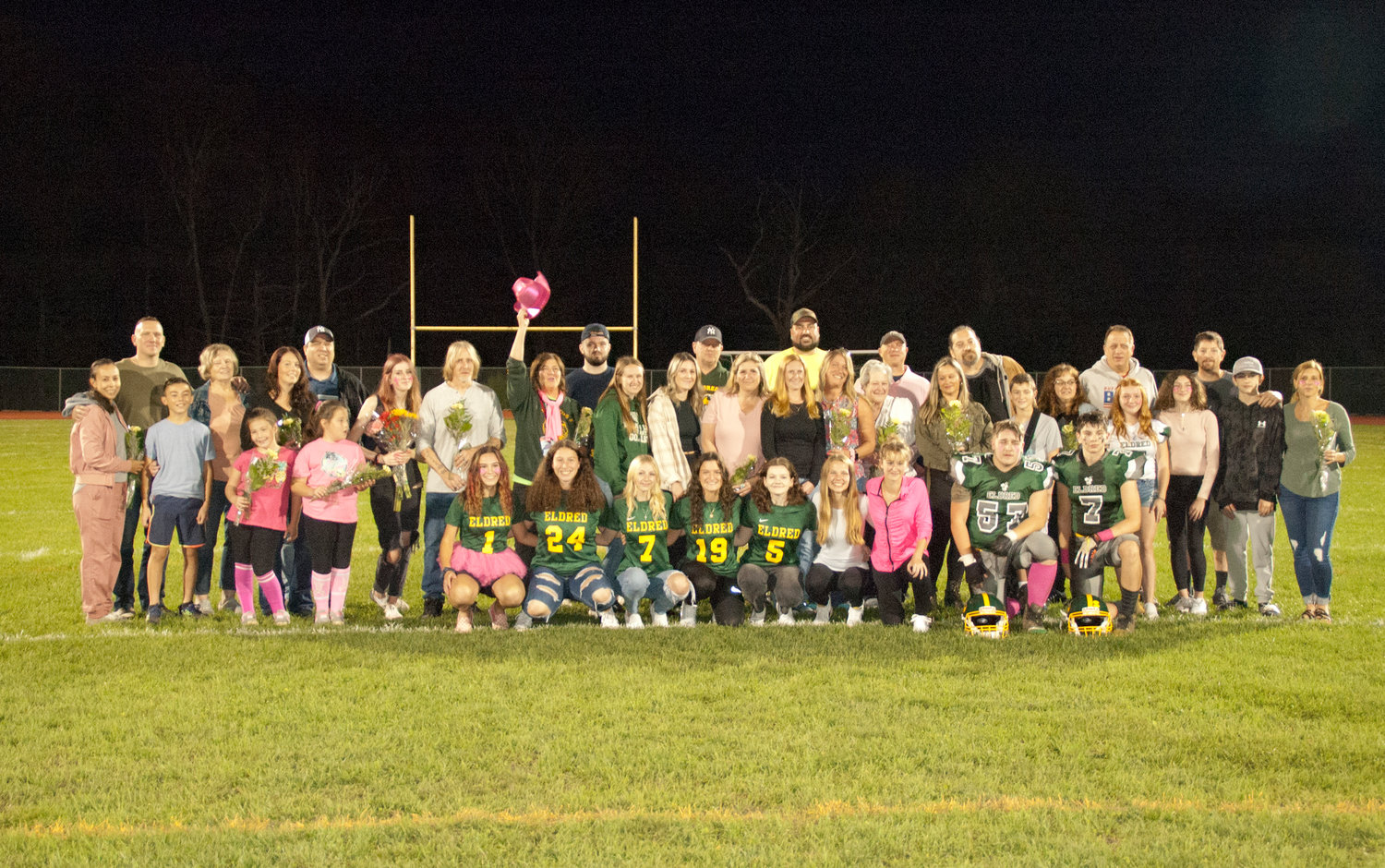 Seniors and their families from soccer, cross country, and football gathered on the field before Friday’s game to be recognized for their hard work all season long.
Anthony Morgano | Democrat
Previous Next
Posted Tuesday, October 19, 2021 6:20 am
Anthony Morgano

ELDRED –– Continuing the trend of their last three games, the Blue Devils once again defeated a league rival, and have a perfect 4-0 record in the division.

The Blue Devils traveled to Eldred, playing the Yellowjackets in front of the homecoming crowd on their senior recognition night. Although Eldred has not won a game this season, they battled from the first offensive series, giving everything they had to keep Roscoe from scoring. Their plan worked, for most of the first half Roscoe struggled to move the ball, the two teams exchanged defensive stands around mid field, forcing punts and turnovers and keeping the score knotted at 0.

Eldred found themselves in front of the goal line after a huge reception by Dominic Furlippa. However, faced with 4th and goal, Roscoe’s Anthony Zamenick swooped in and intercepted a pass, stopping Eldred from scoring and giving his team life. With 3:42 left in the first half, Anthony Teipelke found the endzone for Roscoe, and the first points of the day had been scored.

On the ensuing drive, Anthony Zamenick intercepted another pass, his fifth of the season, and secured the ball for Roscoe. Alaniz Ruiz took that momentum and ran with it, literally, for 57 yards and another touchdown before the half. The two point conversion failed again, so the Blue Devils only held a 12-0 lead over the Yellowjackets at the break.

Early in the 3rd quarter, after Roscoe received the second half kickoff, Ruiz bounced forward, absorbing contact and propelling himself into the endzone for a second time, this time from 32 yards. The 2-point conversion by Robert Staudt would be successful, and the Blue Devils were up 20-0.

Eldred’s starting quarterback left during halftime due to injury, so they were forced to run a direct snap offense, which had some success early on, but they were still unable to find the endzone. Roscoe had a huge defensive stand at the 3 yard line, forcing a turnover on downs for the Yellowjackets.

They were unable to move the ball forward, and with their backs to the goalpost, the Blue Devils had to punt to start the fourth quarter. The snap on the punt was bad and the punter was dragged down before he could get the ball away, giving Eldred great field position to start at the Roscoe 14 with another chance to score. Unfortunately, on their first play of the drive, a bad snap flew past their running back and Roscoe was able to fall on it to quickly get the ball back.

At this point in the 4th, substitutions started to come in for the visitors and, lineman-turned-prolific-running back, Eric Tomah broke loose for a 25-yard run before barreling into the endzone on a 4 yard touchdown run to make the score 26-0.

Although the scoring was a one-sided affair, both teams showed tremendous respect to each other, picking each other up after each tackle and patting the shoulder pads of the opposing players.

While the two teams are on opposite ends of the division, they both have big matchups coming up. Roscoe will host Sullivan West, who was undefeated until a loss to Ellenville Friday night, and Eldred will host Tri-Valley, coming off a big win over Fallsburg.

Coach Steve Barone of Eldred was impressed with his team saying, “We played a good first half, and we’re still optimistic. It’s good to see kids coming out and our program is growing.”

Roscoe’s coach Mike Hill said, “Eldred played great football, and they were tough all night. They deserve a lot of credit for the way they came out to play.”

On giving senior lineman Eric Tomah the opportunity to run the ball Hill said, “It has to be one of my favorite memories of coaching so far. Rewarding a senior who has been playing for a long time, and being able to do something special for him is nice.”