FALLSBURG – Down but not out, two county schools sitting at 1-4 overall met on Friday to battle it out and try to improve their position in the standings.

Fallsburg, who had a division win, … 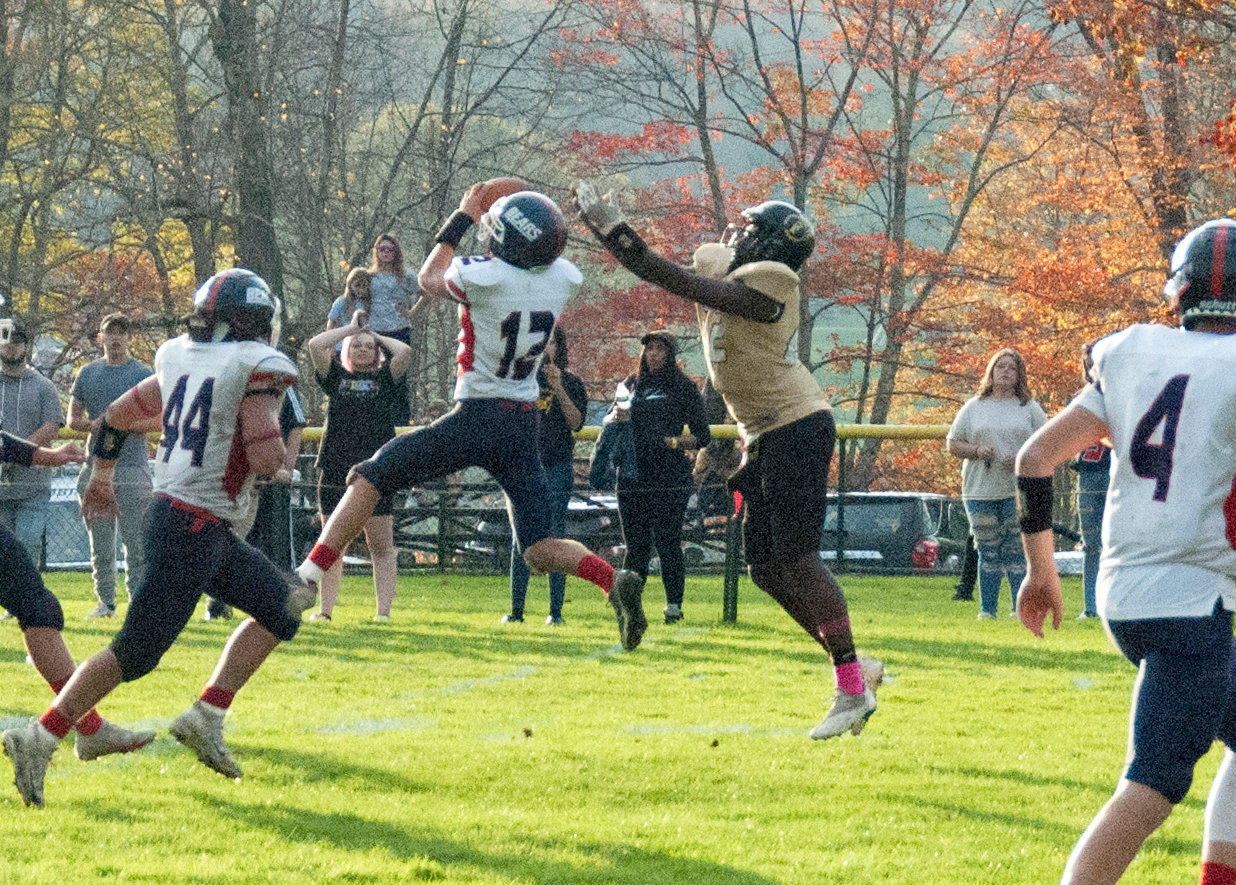 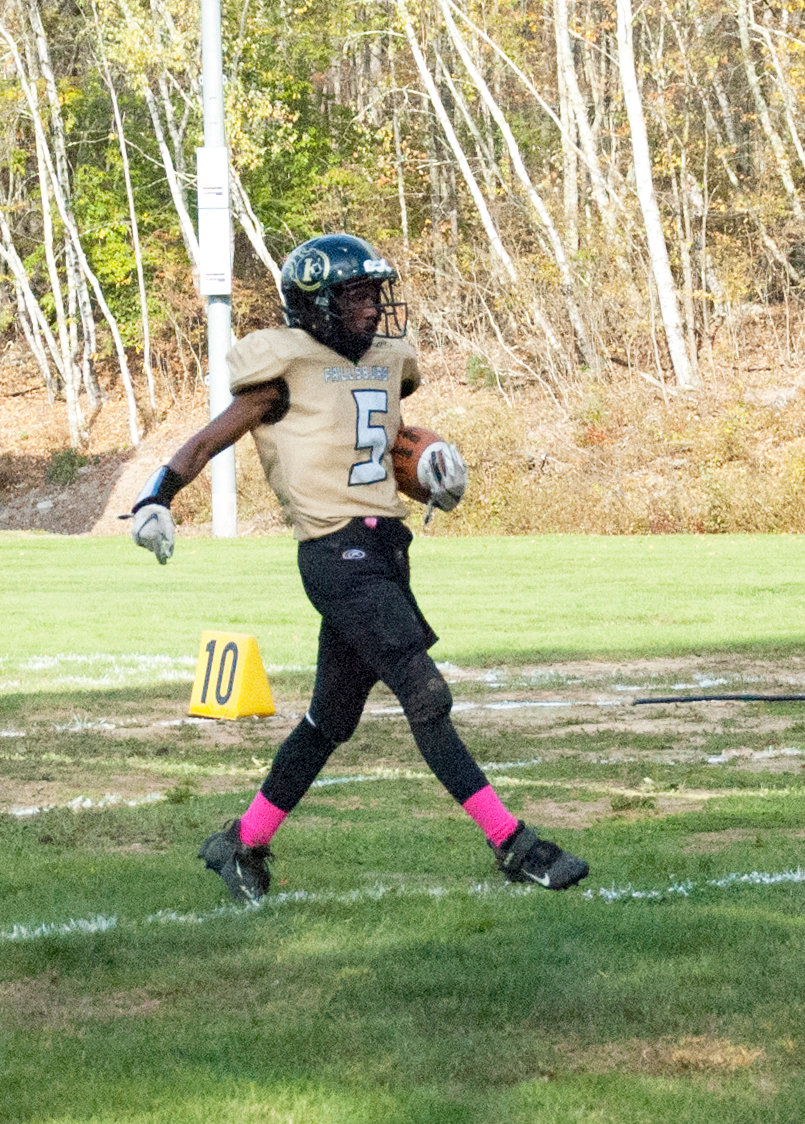 Jerimiah Findling dances into the end zone for a two-point conversion. Fallsburg scored all 14 of their points in the second quarter against Tri-Valley.
Anthony Morgano | Democrat 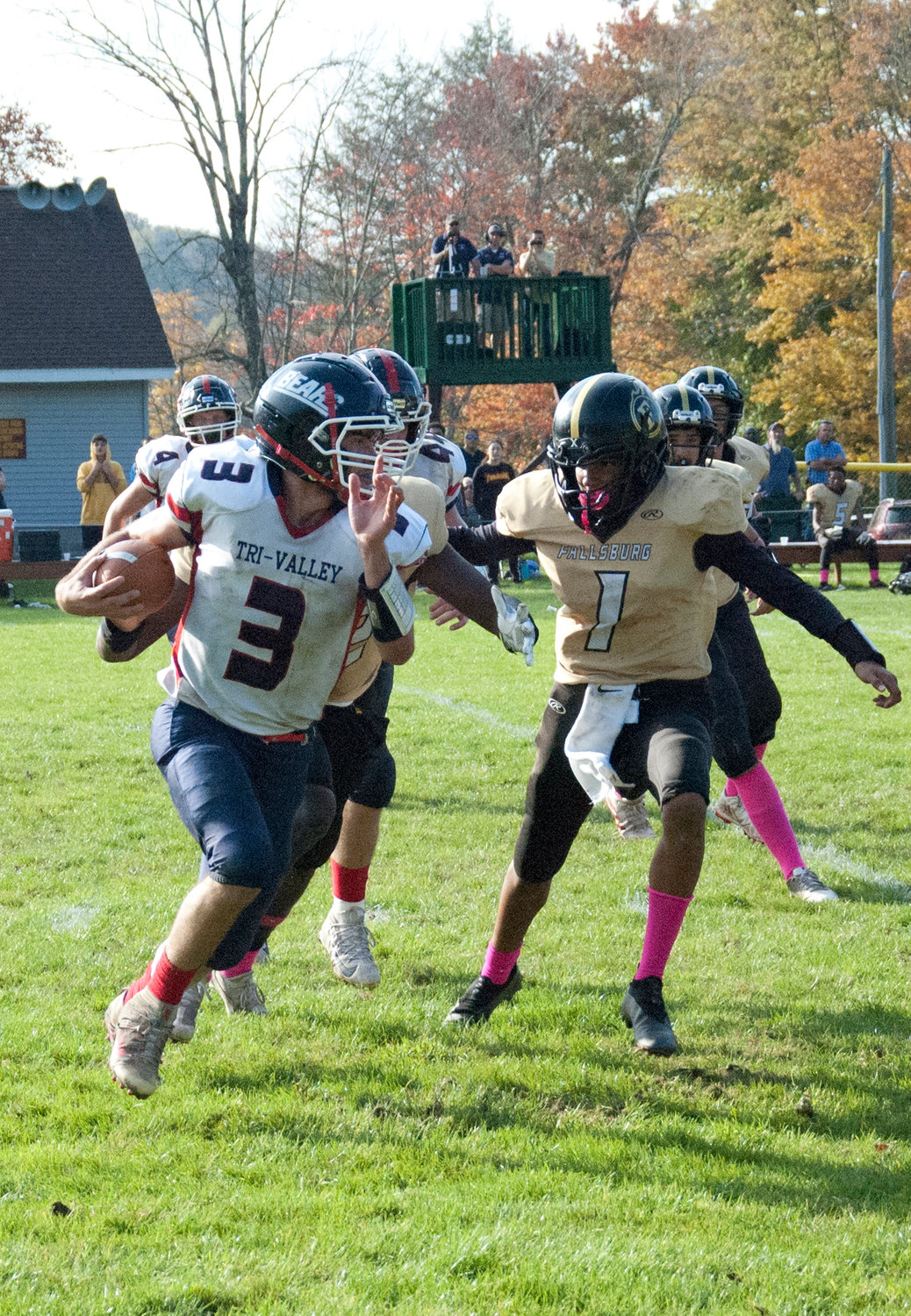 Brian Kelly was all over the place on Friday. He had a big run to set up the first T-V touchdown, he scored the second touchdown, and he also notched a two-point conversion in the game.
Anthony Morgano | Democrat
Previous Next
Posted Tuesday, October 19, 2021 6:20 am
Anthony Morgano

FALLSBURG – Down but not out, two county schools sitting at 1-4 overall met on Friday to battle it out and try to improve their position in the standings.

Fallsburg, who had a division win, hosted Tri-Valley, who’s only win of the season came in week one against Onteora. The two schools were both hungry for a win as they met at Morningside park after school.

As soon as the game started, you could tell the kind of energy that both teams were bringing that day. Tri-Valley elected to receive the kickoff after winning the coin toss, and instantly started moving backwards thanks to penalties. Just when the drive seemed lke it was going to stall, Bears’ Brian Kelly broke loose and brought the ball into the red zone. David Allison found his way into the endzone and Dylan Poley followed up with a 2-point conversion run to give the bears an early 8-0 lead.

Fallsburg wasted no time in scoring a touchdown of their own, with Isaiah Young finding the endzone and Jerimiah Findling running in the conversion, tying the score at 8 after only 9 seconds of the second quarter had passed.

After less than two minutes of the clock had run down in the second quarter, Tri-Valley found the endzone again, this time it was Brian Kelly on a 32-yard run.

After the teams traded a few defensive stands, and an injury timeout reset the pace, Fallsburg’s Andrew Rein broke loose for a 54 yard run. The Comets attempted to kick the point after but it was wide right, and the score was tied at 14 before the half.

It took Tri-Valley almost the entire third quarter, but they eventually found the endzone again. David Allison was good from four yards to make the score 20-14. After a stalled Fallsburg drive, Tri-Valley got the ball back and this time it was Dylan Poley who found the endzone, barrelling in for a 13-yard run. Brian Kelly converted the 2-point conversion and the score was now 28-14 Tri-Valley, which is where it would stay until the end of the game.

Coach Dom Scanna was proud of the way his Comets fought saying, “These guys have a lot of fight in them, and that’s why they’re going to be successful. We’re building good young men and, if they keep working hard and working together, there’s nothing they can’t do.”

Coach Kevin Crudele was similarly proud of his team, “It started off a bit rough with the early penalties, but once we settled in we started to move the ball well. One of the biggest things that we have been working on is ball security, and today we did a great job of protecting the ball.”