Tri-Valley fights through much adversity to vanquish Ellenville

ELLENVILLE – “The greater the obstacle, the more the glory in overcoming it,” wrote Moliére, the great French writer. In terms of obstacles encountered, or more aptly put, …

Tri-Valley fights through much adversity to vanquish Ellenville 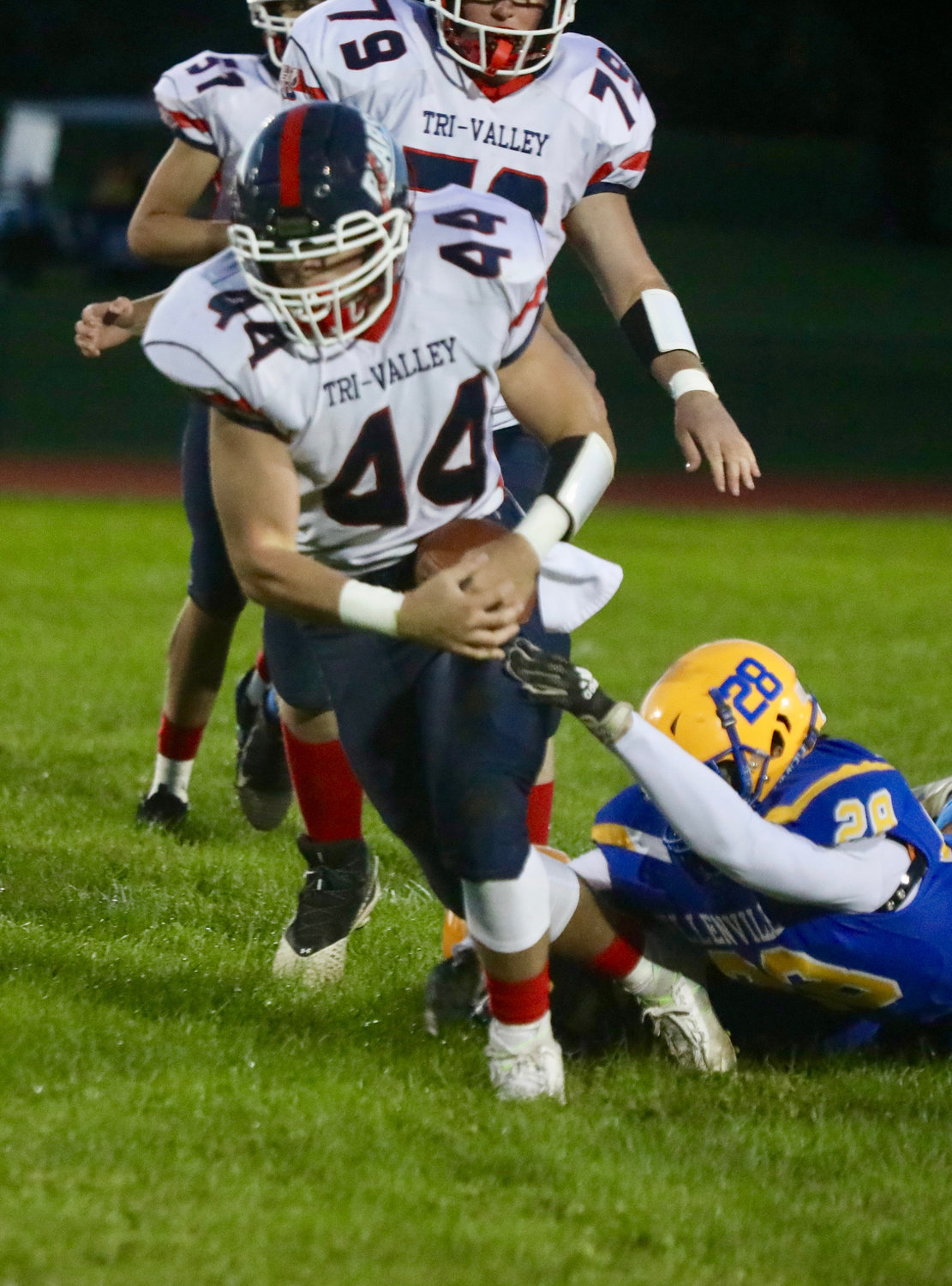 Tri-Valley senior running back Dylan Poley breaks a tackle and advances the ball up the field. Poley is not only a fierce runner, he is also a defensive standout.
Richard A. Ross | Democrat 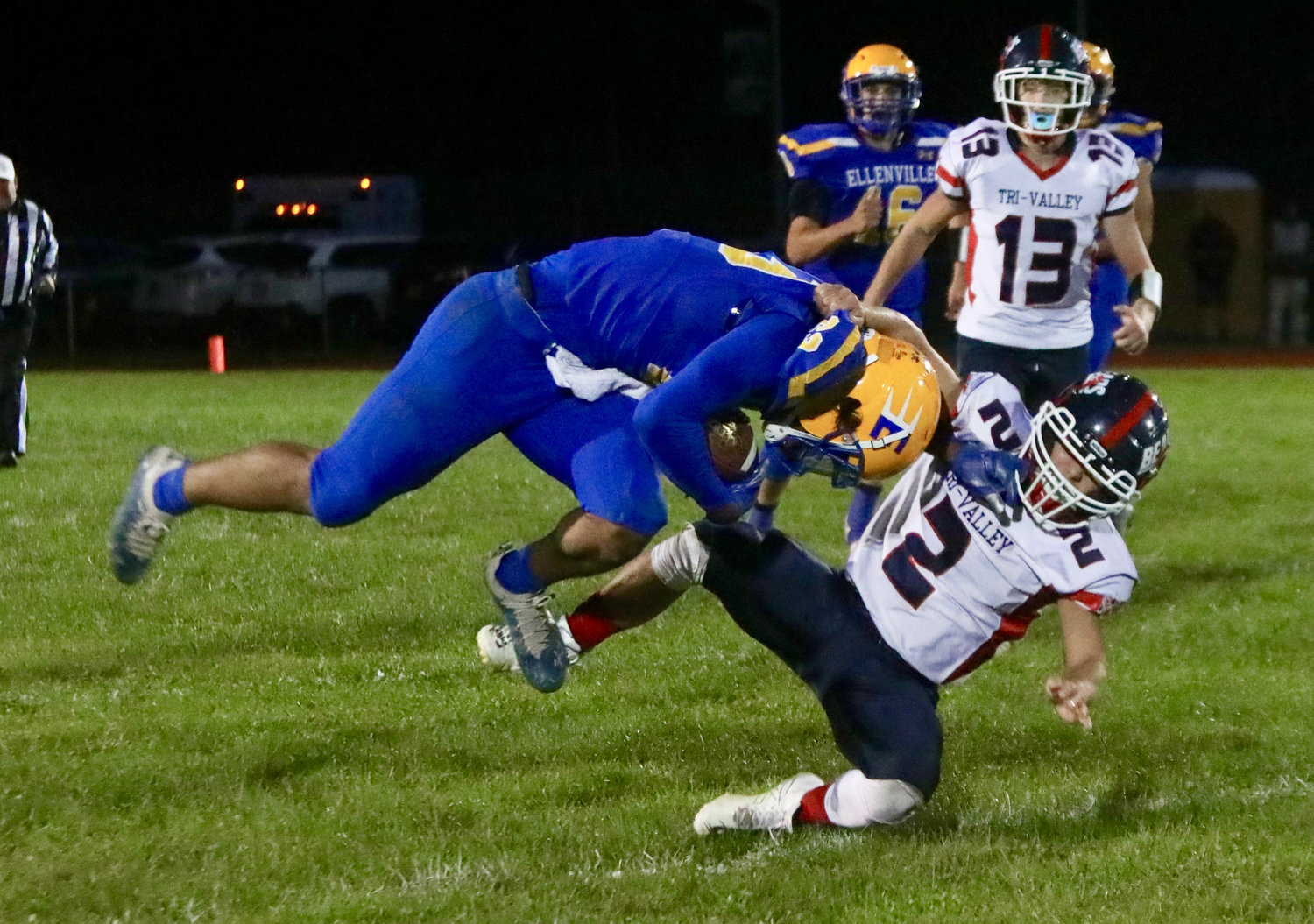 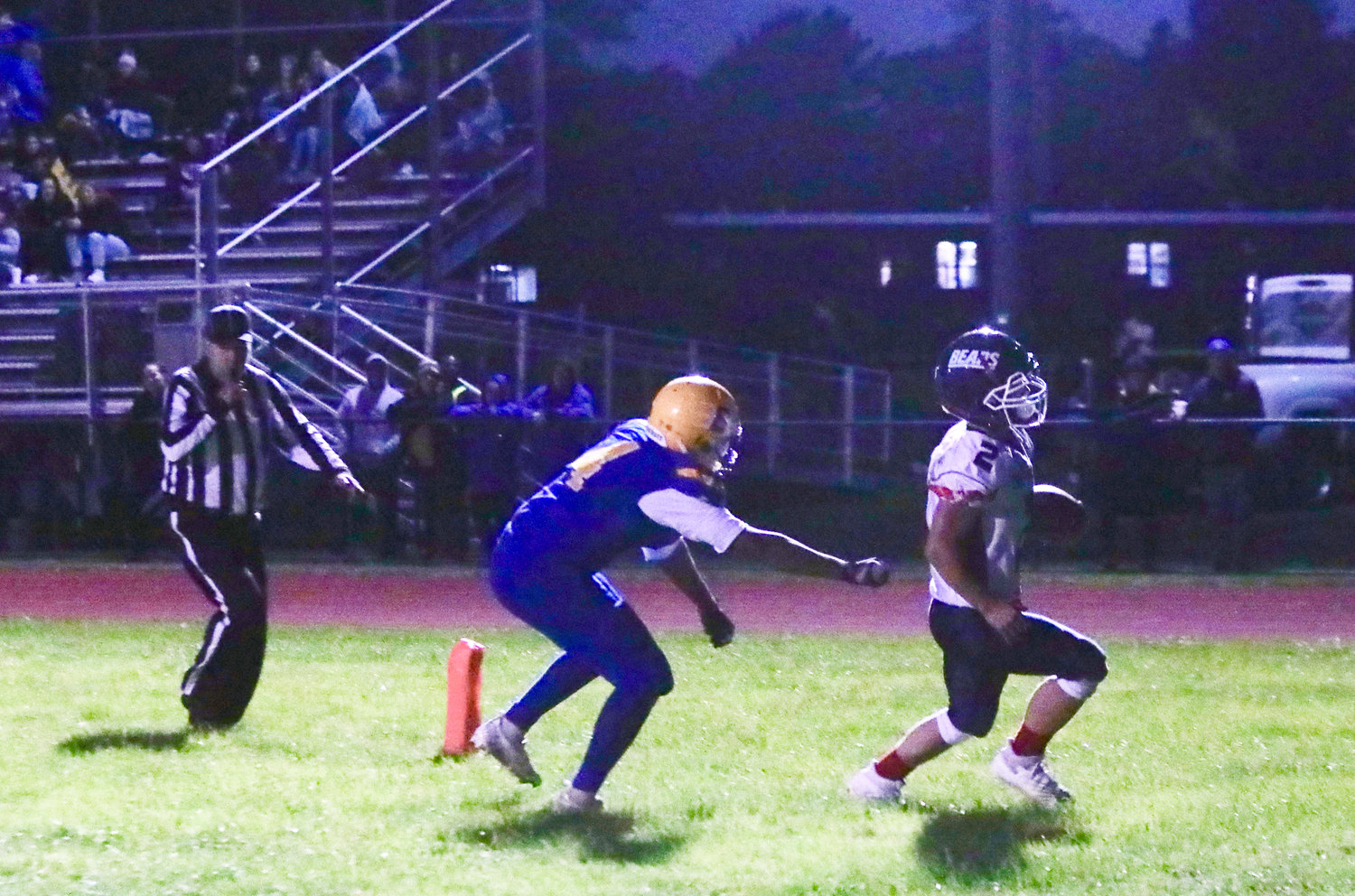 Austin Hartman eludes all tacklers to marshal a 54-yard TD to give the Bears the lead they would not relinquish. He scored two TDs in the game and converted both conversions. The second conversion proved to be the difference in the 16-14 victory.
Richard A. Ross | Democrat
Previous Next
Posted Tuesday, September 27, 2022 6:20 am
Richard A. Ross

ELLENVILLE – “The greater the obstacle, the more the glory in overcoming it,” wrote Moliére, the great French writer. In terms of obstacles encountered, or more aptly put, adversity, Tri-Valley had to grit its way through a tsunami of such enroute to their gutsy 16-14 league win over rival Ellenville.

For the Ellenville Blue Devils on a night where they were honoring local first responders and looking for their first win after losing two games by a total of five points, heavy reliance on thunderous senior running back Casimiro Pomales Jr, was a foregone conclusion.

As such, T-V’s defensive scheme assiduously practiced to deal with that eventuality. But as it would turn out, Pomales, who did score both Ellenville touchdowns, was not the only factor the Bears had to overcome. Add in penalties, fumbles and calls by officials that left the Bears’ fuming and befuddled, and you had the potential for a devastating loss that Tri-Valley turned into an epic win. The first quarter featured an 8-0 Ellenville lead via junior quarterback Jacob Wright’s 57-yard touchdown pass with 32 seconds remaining in the stanza. Wright ran in the conversion. Tri-Valley was quick to respond as senior quarterback Austin Hartman found the edge and ran four yards for paydirt and topped it off with his conversion to tie the game.

With under a minute to go until the half, Hartman took off on a 54-yard jaunt and once again barreled through for the conversion to give the Bears a 16-8 halftime lead.

Much can be said about the Bears’ line play that blocked well on offense to enable running backs Hartman, Dylan Poley and Ian Mullen to advance the pigskin. The Bears evinced a total ground game that featured no passing whatsoever.  Defensively, the team showed great pursuit as many of the game photos attest to. Hartman led the team with eight tackles.

The third quarter was a defensive standoff. Both teams had setbacks from penalties, and each lost a fumble. With 9:20 to go in the fourth quarter, Pomales Jr struck again, this time on an 18-yard gallop. Wright’s conversion attempt was nixed by the Bears who would go on to hold on for the 16-14 league win.

T-V (2-1, 1-0) knew they had come through a gauntlet against a talented and physical Ellenville squad.

Bears’ head coach Kevin Crudele summed things up: “I’m really proud of the mental toughness the guys showed tonight. They overcame turnovers and penalties and continued to battle. Ellenville is a very physical football team with backs that are quick and tough. We have a lot to clean up for next week, but we did go 1-0 this week. Back to 0-0 on Monday.”

Crudele was referring to the home game vs. Roscoe this coming Saturday with the attitude that the slate is clean despite the win. That is the right approach as so much of the season still looms large. Ellenville (0-3, 0-1) travels to Eldred on September 30. The feisty Yellowjackets nearly upset Sullivan West, losing a game they led in for three quarters 14-10.

Stat Line: Tri-Valley total offense 195 yards on 36 plays for 5.4 yards per play average (all rushing). The Bears tallied nine first downs and converted three of seven third downs and one of five fourth downs. Hartman rushed for 119 yards on 14 carries for an 8.5 yards per carry average. Poley was 13-for-52 averaging four yards per carry and Ian Mullin carried it five times for 20 yards. The Bears registered five sacks for 46 yards. Hartman was sacked only once.

Ellenville’s Jacob Wright completed five-of-ten passes for 92 yards and one TD. Pomales had 18 carries for 131 yards for a 7.3 yards per carry average. The Blue Devils garnered 11 first downs. 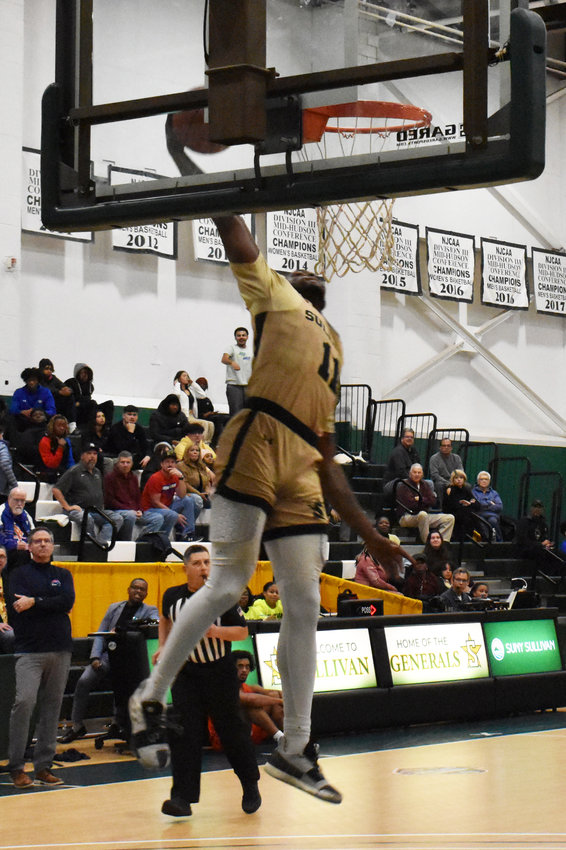 SUNY Sullivan celebrates with 'A Night of Giving'
LOCH SHELDRAKE – SUNY Sullivan hosted their first game after being named the Number 1 team in the Country for the NJCAA. Unfortunately for the Generals, a Covid-19 ravaged unit fell just short …
Vehicle-animal collisions!
Collisions between vehicles and animals, mostly deer, occur in the months of October, November and December. This is not a surprise to hunters who are aware of the whitetail deer runt and the hunting …
Sports Calendar
Friday, December 9 High School Boys Basketball Tri-Valley @ Ellenville, 7 pm Fallsburg vs Liberty @ Ellenville, 7 pm Girls Basketball Fallsburg vs Liberty @ Ellenville, 5 … 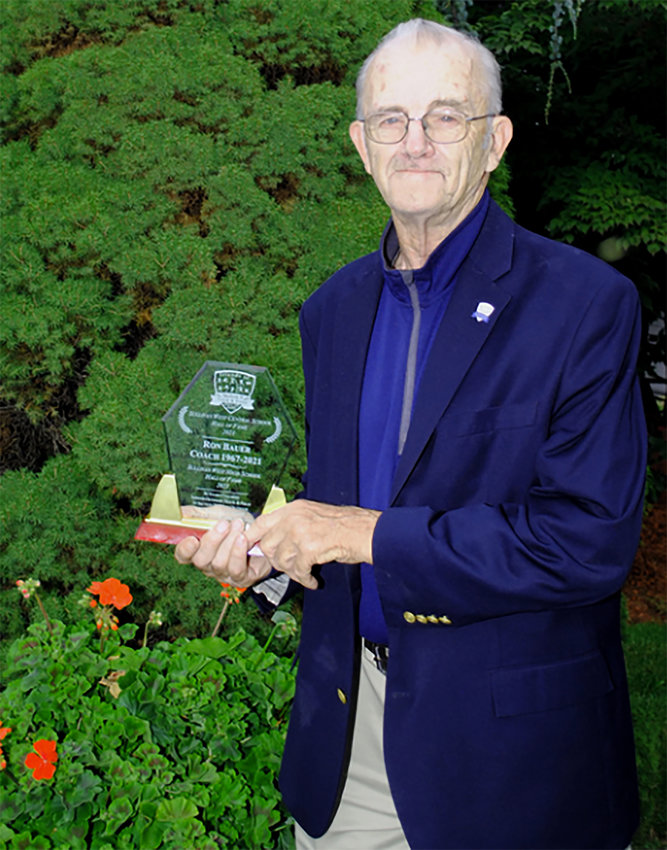 A Golden Apple legacy
LAKE HUNTINGTON – How do you quantify 56 years of dedicated teaching? Moreover, how can you put into words the time, sacrifice and devotion delivered to so many by one remarkable individual? … 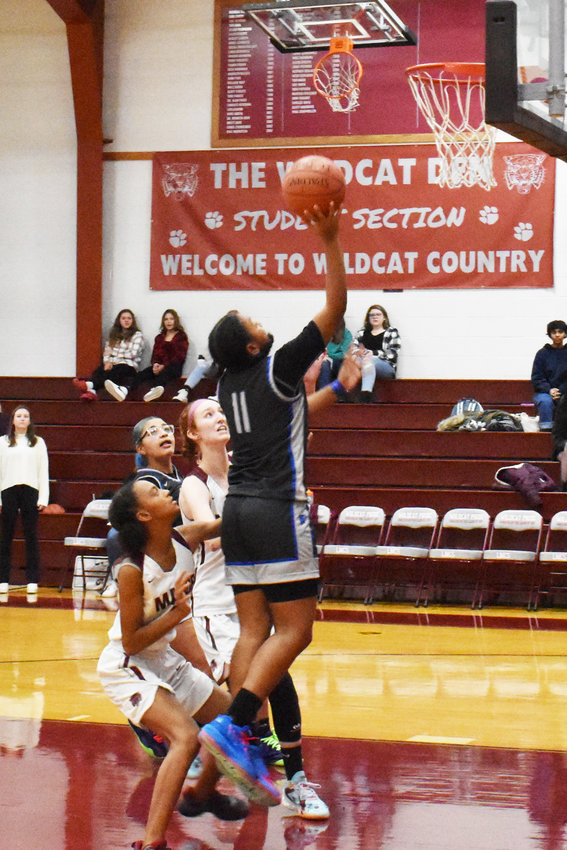 Monticello girls earn non-league victory over Manor
LIVINGSTON MANOR – The Lady Panthers got the job done in spectacular fashion last night against the Lady Wildcats. Monticello’s Aaliyah Mota gave the offense the spark they needed in the …