Roscoe stays undefeated in league with big win over Tri-Valley

ROSCOE –– The Blue Devils are on a roll, securing their third straight victory against league opponents after starting 0-2 against the teams from the other division. Defense has been key …

Roscoe stays undefeated in league with big win over Tri-Valley 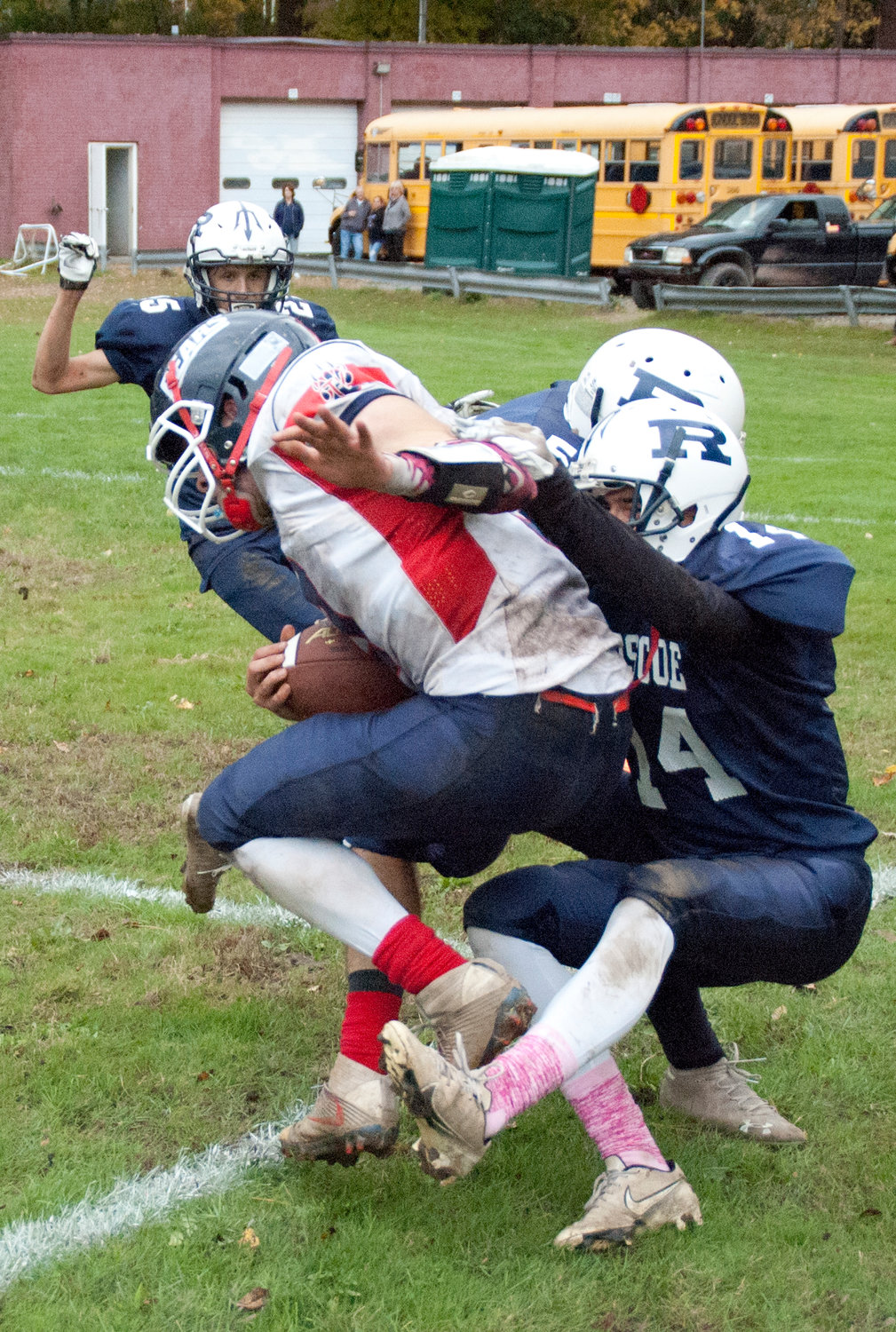 No good! Roscoe defenders drag Brian Kelly out of bounds just inches before crossing the goal line for a 2-point conversion. Roscoe’s defense had a strong showing in Saturday’s league matchup against the Bears.
Anthony Morgano | Democrat 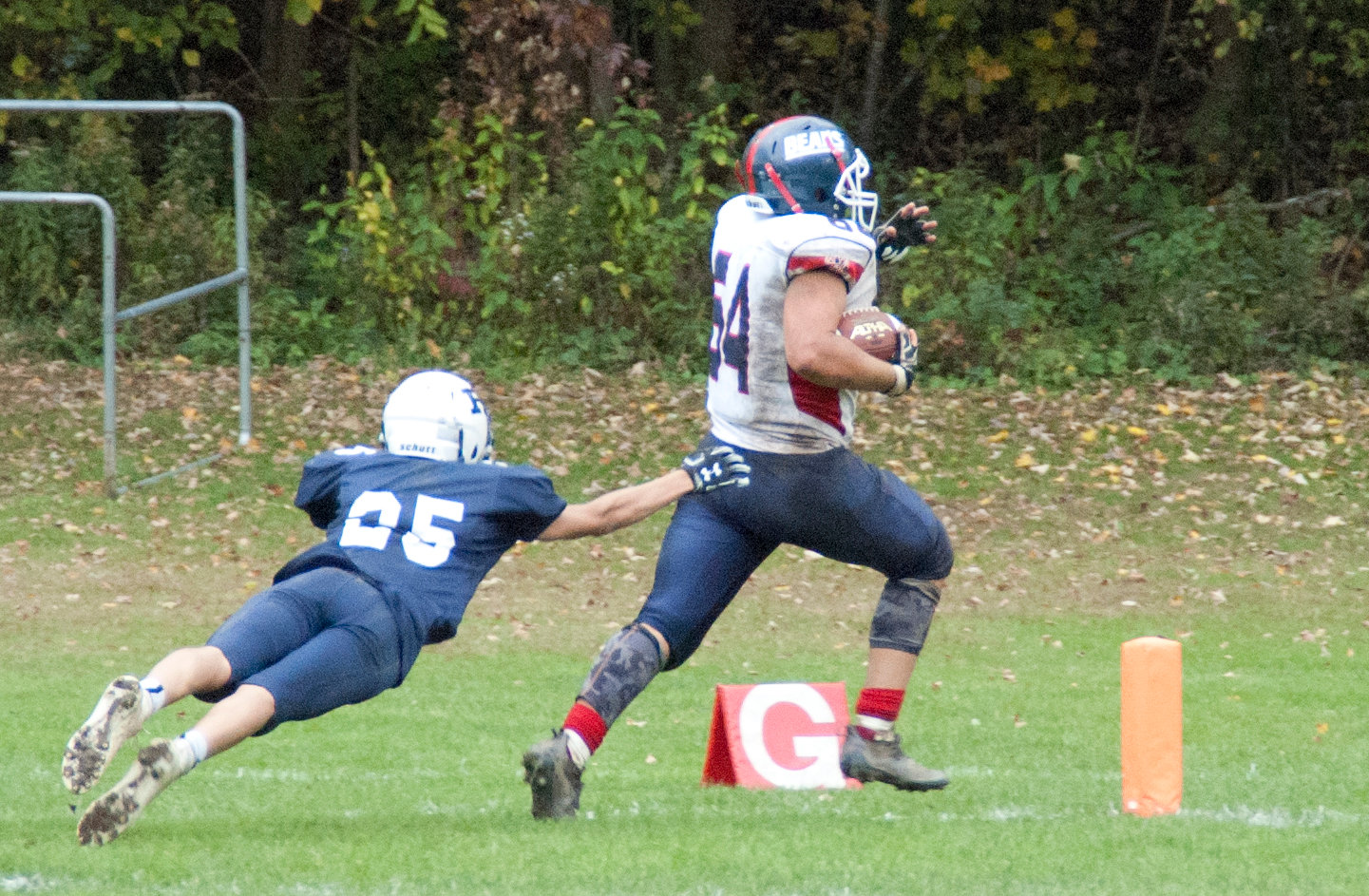 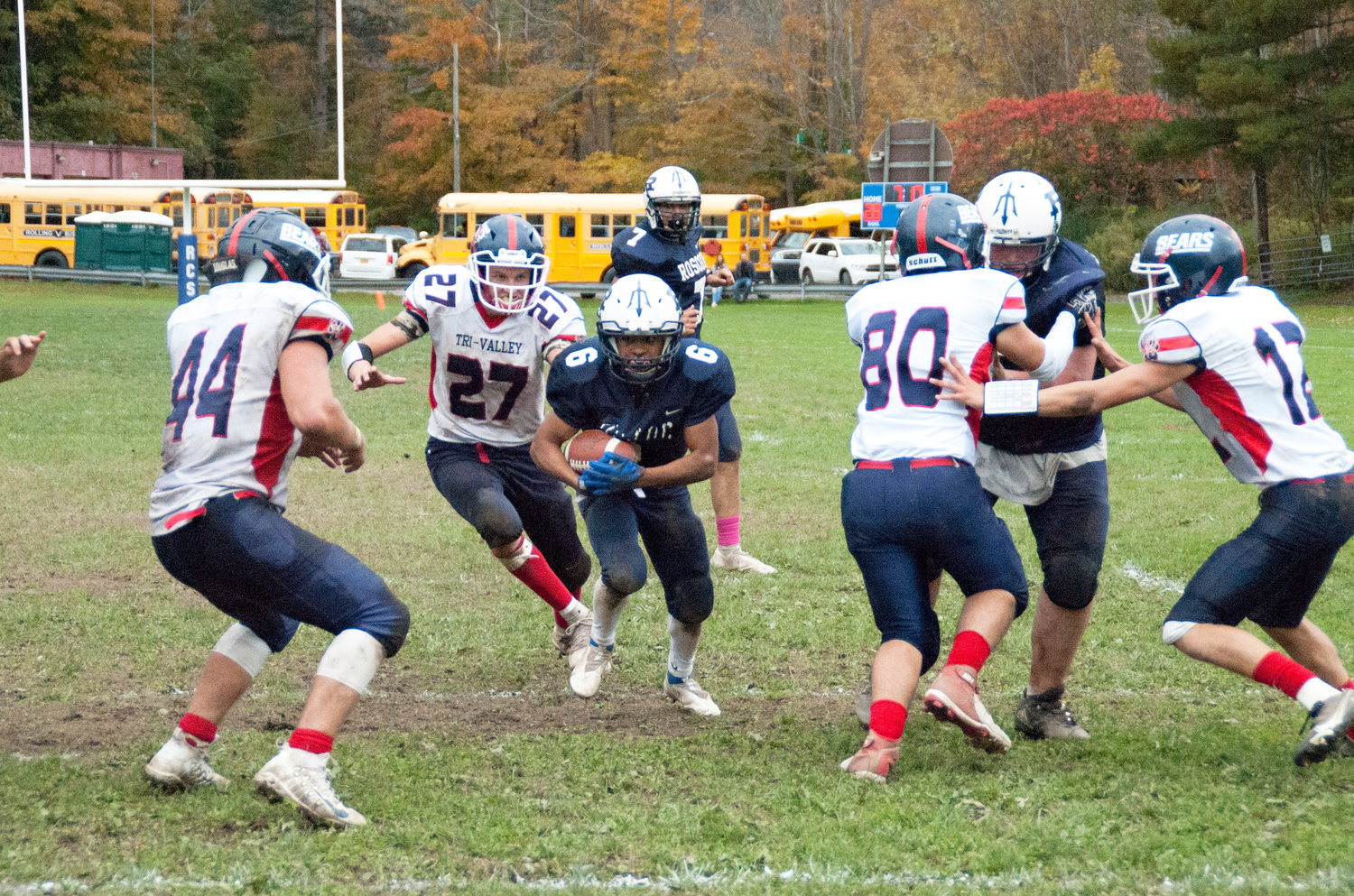 ROSCOE –– The Blue Devils are on a roll, securing their third straight victory against league opponents after starting 0-2 against the teams from the other division. Defense has been key for the Blue Devils, having only allowed 9 points in their last three games. This week it was the Bears, who now face seemingly unsurmountable odds to make it to the postseason.

From the opening kickoff, Roscoe’s defense played with a purpose. Forcing, and recovering, a fumble on Tri-Valley’s first drive gave Roscoe good field position to start their day on offense. Their initial drive ended with an exclamation point as Alaniz Ruiz scampered into the endzone for a 13-yard rushing touchdown. The early score was Roscoe’s first points in the opening quarter through five games.

The two teams exchanged defensive stands for the next three drives, neither team able to break up the 6-0 deadlock, until a blocked Tri-Valley punt set the Blue Devils up inside the Redzone. Roscoe picked up a first down at the 1-yard line before Ruiz barrelled in for his second score of the day, increasing the score to 12-0 after a second failed 2-point conversion.

On the ensuing kickoff, the Bears mis-handled the ball, and Roscoe recovered, setting them back up on offense, for a drive that took just a minute and 23 seconds before the Blue Devils found the endzone for the third time in the first half. This touchdown, a 17-yard rush, scored by Ruiz again, his third of the half. Kevin Bear converted the 2-point conversion and Roscoe was in contol 20-0. That score held at the half, with the Blue Devils set to receive the kickoff to start the 3rd quarter.

The third quarter picked up where the second left off, with Roscoe continuing to move the chains up the field. Just over two minutes into the third quarter, after a 47-yard run by Ruiz, Kevin Bear broke loose for an 8-yard touchdown run. Anthony Teipelke completed a pass to Anthony Zamenick for the 2-point conversion.

The 28-0 score held for the rest of the third quarter, and five minutes into the fourth, before Ruiz found the endzone for the fourth time of the day, this time a 5-yard run. The two point conversion was stopped and the Blue Devils lead increased to 34. With just 2:37 left in the game, Tri-Valley’s David Allison broke loose for a 33-yard touchdown run. The 2-point conversion run was no good, and the score would hold at 34-6.

After the game, Tri-Valley falls to 1-3 (0-3) and faces Fallsburg Friday afternoon for another chance to earn their first league win. Head coach Kevin Crudele said, “We’ve had a problem getting out of our own way, Roscoe came out ready to play and we helped them a bit too much.”

Roscoe, like Sullivan West, remains undefeated in the league this season at 3-0. They face Eldred, who is still looking for their first win of the season, on Friday night. Coach Mike Hill said of his team, “We woke up in the first quarter today, and it was a big step forward to play a full game. Today was a total team effort.”