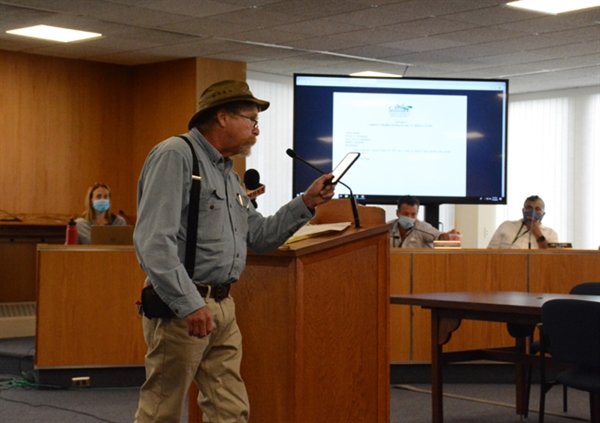 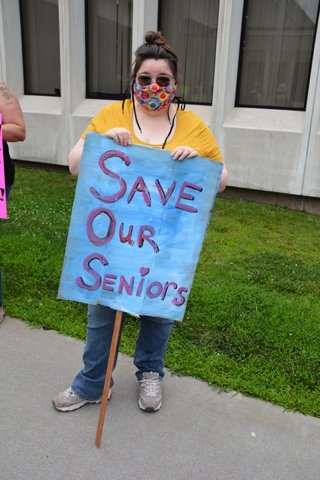 Cat Scott, prior to the start of Thursday's public hearing, holding her sign which read: “Save our seniors.”
JOSEPH ABRAHAM | DEMOCRAT
Previous Next
Posted Monday, July 20, 2020 12:00 am
Isabel Braverman - Staff Writer

MONTICELLO - The sale of the Care Center at Sunset Lake in Liberty became an impassioned issue as residents and employees of the nursing home spoke out about the county legislature's proposal to sell it.

A crowd turned out to the public hearing on Tuesday last week, and there were so many comments that the hearing was extended to Thursday afternoon.

A vote was scheduled to take place, but it was tabled. There is currently no timeline on when it will happen.

The proposed resolution is to transfer the Care Center to a Local Development Corporation (LDC), which is the first step in selling the facility.

Alvarez previously stated he would vote against it, and on Thursday legislators Nadia Rajsz and Joe Perrello expressed they would also vote no. Legislator Ira Steingart said he took issue with not being informed about the sale, and promised to “keep it [county-owned] for as long as possible.”

The resolution requires a super majority to pass, meaning it would need six yes votes.

Other legislators said they need more information and research before making a decision.

“These decisions aren't easy; you have to look at the whole picture as a county,” Doherty said, adding that the financial situation is “pretty dire.”

Cat Scott, who said her mother is a resident at the Care Center, opposes the sale and hopes the legislators will “rise to the challenge” and figure out a different solution.

“That's who we are, we do chicken barbeques and softball tournaments when we get cancer, we help each other, we hold hands, we don't sell each other out when times get tough,” she said.

She added that the nurses and other staff at the Care Center just went through the trying time of responding to the coronavirus pandemic.

“When COVID-19 hit it was like that building was on fire, and every single day, every single shift, those people ran into that burning building to hold hands and to comfort people who couldn't be with their family,” she said, adding, “heroes deserve to be rewarded.”

Lou Setren, Vice President of the Family Council of the Care Center at Sunset Lake, which advocates for residents, their families and for the staff of the facility, said he also opposes the sale.

He wrote an open letter to the legislature opposing it and says it has over 500 signatures.

He also said that there have been many studies that show privately owned nursing homes do not provide the same quality of care as not-for-profit facilities.

Others commented that Garnet Health Medical Center was not referring patients to the Care Center due to the uncertainty of its future.

However the Democrat reached out to Garnet Health Medical Center-Catskills CEO Jonathan Schiller, who said that isn't true.

“We know that excellent care is provided there, and we give our patients who require nursing home care all the available options,” he said.

After the close of the public hearing, some residents said they were happy with the outcome, but hope to see it voted down.

“All in all today was a good day,” Scott said. “I want to thank the chairman and the legislature for giving us this opportunity, for listening to us and for starting to do some more research.”

What's going on in Orange County?

A few people who spoke during the public hearing made mention to the Valley View Center for Nursing Care in Goshen, which is owned by Orange County.

They said that it was struggling financially and the county considered selling it, but it has been turning a profit in recent years. According to an article in the Times Herald Record from 2018, the center turned a profit for the third straight year.

However Legislature Chairman Robert Doherty said upon further investigation they are losing money each year.

“Sullivan County Legislators asked for Orange County's insights on this issue and we provided it to them. Every County has a different financial and management situation. We know the Legislators from Sullivan are carefully reviewing their options,” said Orange County Spokesperson Justin Rodriguez.

Alvarez said his impression from Neuhaus was that the Care Center at Sunset Lake could be turned around.

“It's not an easy task, but it is an achievable task, it will take a little bit of time,” Alvarez told the Democrat.

Doherty, however, had a different impression.

“Their advice to us was to sell it. They said if you can sell it, sell it,” he said.