FALLSBURG – “It takes each of us to make a difference for all of us.” 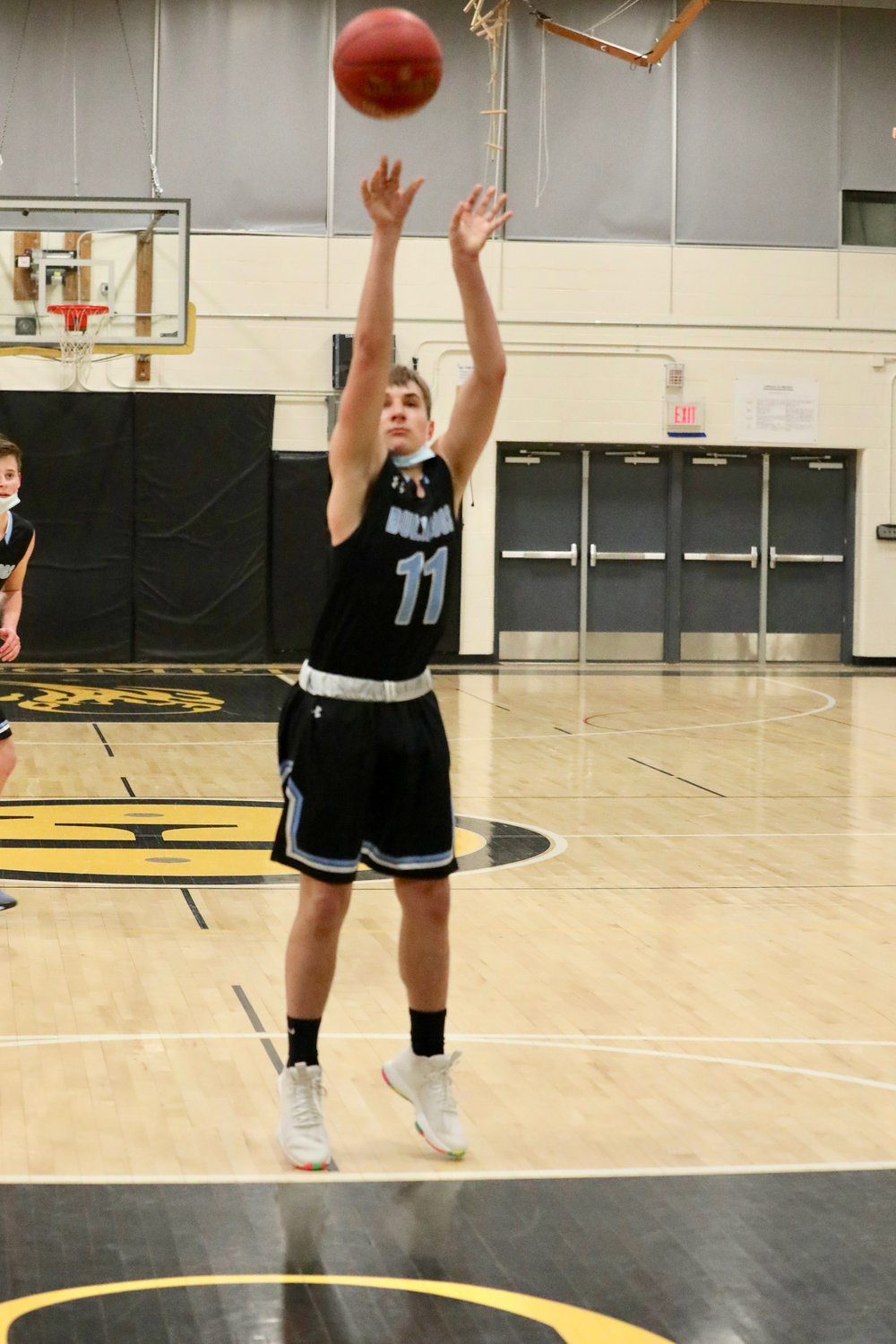 Sullivan West sophomore Jacob Hubert cans two free throws to ice the game after stealing the ball on Fallsburg’s late trip up to the floor after Campanelli hit the go-ahead free throw.
Richard A. Ross | Democrat 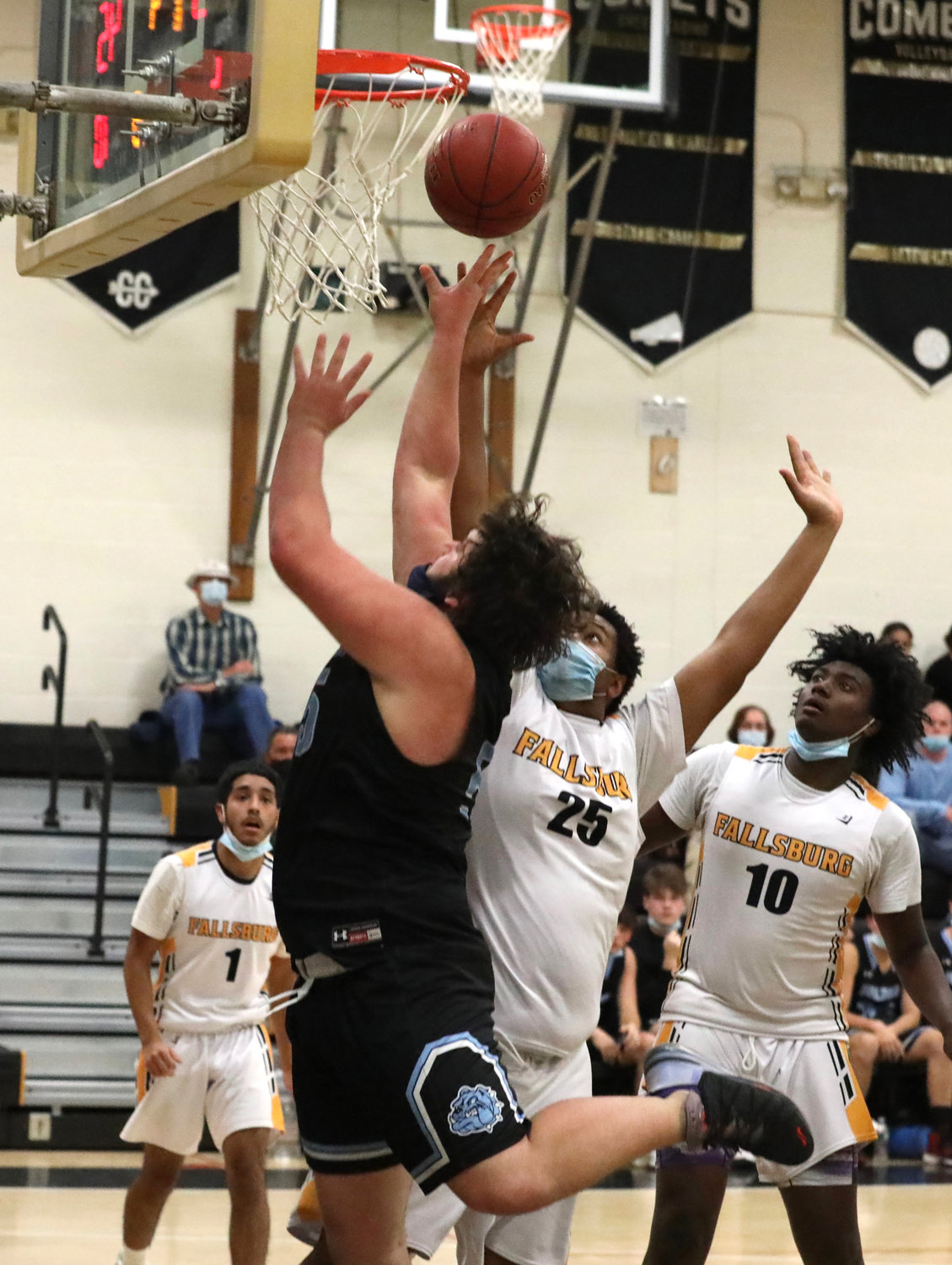 Sullivan West senior Chris Campanelli goes up strong and is fouled by Fallsburg’s Akinde Bryan with 21 seconds remaining. The score was tied at 45 and Campanelli made one to give the Dawgs a 46-45 lead.
Richard A. Ross | Democrat 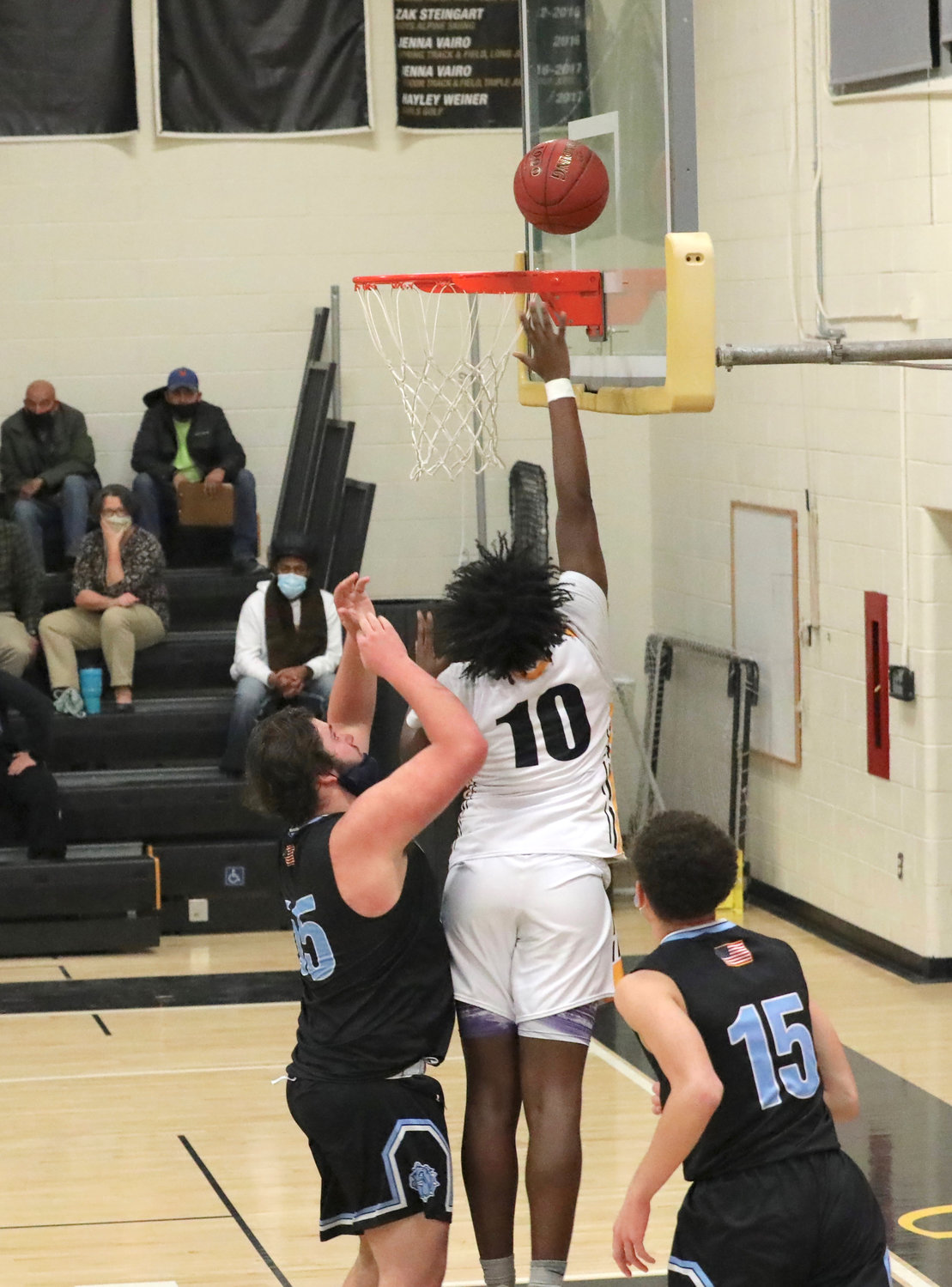 Fallsburg junior Eugene Johnson gets inside position on Sullivan West’s Chris Campanelli to score two of his game-high 19 points.
Richard A. Ross | Democrat 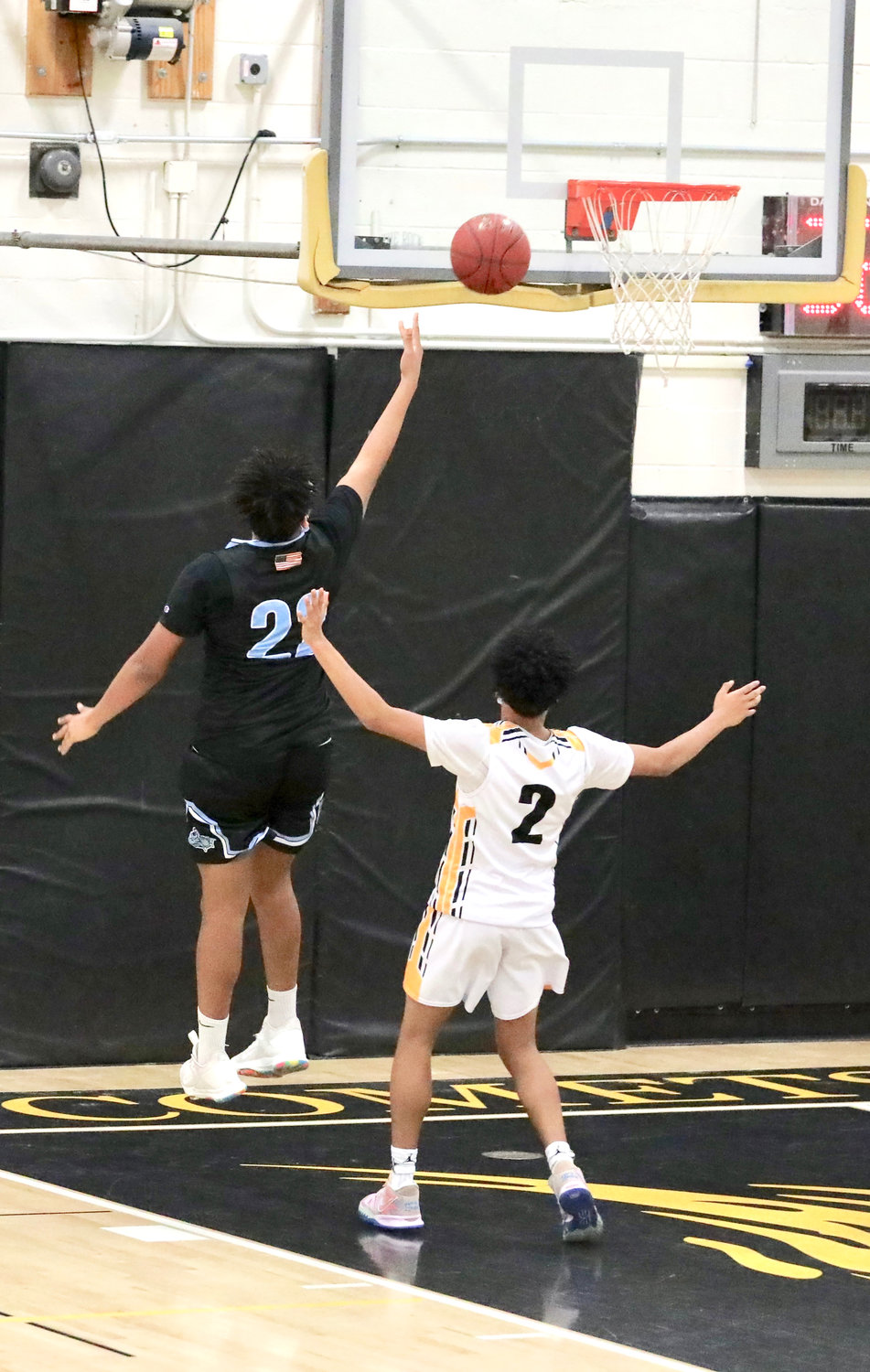 Sullivan West’s Danny Shami scores his lone basket which came at an opportune moment in the fourth quarter.
Richard A. Ross | Democrat 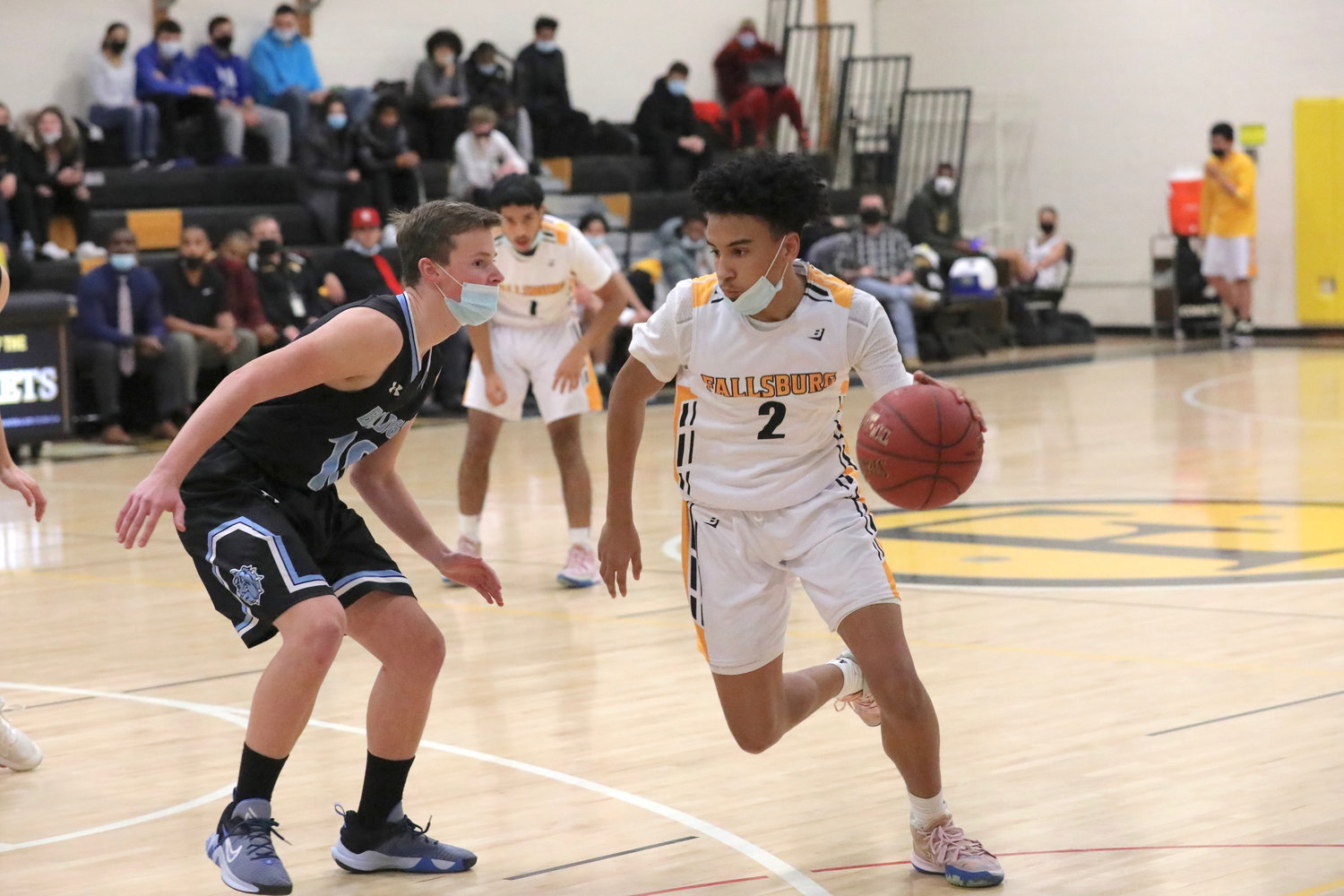 Fallsburg’s Isaiah Young looks to dribble by Sullivan West’s Matt Dubois. Fallsburg had trouble with the Westies’ 3-2 zone that often kept the ball on the perimeter. Dubois opened the game with one of his two threes. He finished with eight points.
Richard A. Ross | Democrat
Previous Next
Posted Friday, January 14, 2022 6:20 am
Richard A. Ross

FALLSBURG – “It takes each of us to make a difference for all of us.”

That maxim aptly describes the collective effort of the Sullivan West Bulldogs who executed near perfection in the final 1:39 of their game against the hosting Fallsburg Comets to pull out an impressive 48-45 non-league win.

This game was a sizzler in every respect with both teams aggressively vying for a needed victory. Fallsburg had suffered a tough 54-48 loss to Port Jervis the night before, while Sullivan West had not played since late December due to the break and Covid postponements.

Fallsburg had a distinct inside size advantage which they looked to explore. But savvy John Meyer, Sullivan West’s coach, deployed a very effective 3-2 zone which limited the effectiveness of bigs Eugene Johnson and Akinde Bryan. They did score 19 and ten respectively, but the ball was often relegated to the perimeter. When it did get inside, shots were challenged. Occasionally the two tall trees were left space and canned easy kisses off the glass but Fallsburg’s outside shooting was challenged by the Westies’ helping pursuit of the ball which prevented many good looks or time to sight in on three pointers.

By contrast, Sullivan West got key perimeter shooting which manifested in six treys with two each coming from Matt Dubois (who started the game off with his first one), Dylan Sager and Jacob Hubert. Fallsburg relied on a zone defense which consistently left openings in the corners. As is often the case, free throws became the determining factor as the Bulldogs made three of four in the game’s crucial waning seconds, while Fallsburg blanked on a pair that would have given them a lead. Two late trips up the floor for the Comets resulted in untimely turnovers. The most important of these came after Chris Campanelli was fouled by Akinde Bryan with the score tied at 45 all with 21 seconds remaining in the game. He made one of two for the 46-45 lead. Then Jacob Hubert stole the ball on Fallsburg’s aborted chance to take the lead. He was subsequently fouled and made both from the stripe to secure the 48-45 victory.

In any winning effort there are always heroics. For Sullivan West, those heroics manifested themselves at both ends of the floor with fine defense and clutch shooting. They were seven for 12 from the stripe (58%), while the Comets were eight-for-13 for a better 61%. The difference was in the fourth quarter wherein the Westies were 5-for-8 whereas Fallsburg was three-for-six. Fallsburg led 14-8 at the end of the first quarter. The game was knotted at 20-all at the half. Sullivan West’s biggest lead was six in the third quarter, but Fallsburg cut that to a two as the Dawgs led 36-34 heading into the final stanza. The Bulldogs outscored the Comets 12-11 in the fourth quarter to eke out the three-point victory. Sullivan West improved to 2-2 while Fallsburg fell to 3-3.

Sullivan West coach John Meyer was clearly pleased with the win, especially since his team had not played in a while and that it was on the road against a Class B team with a size advantage. “Chris went up and took that inside shot late and got fouled. He made one of two. Then Jacob Hubert came up big with that steal and made both free throws. That was huge.”

Sullivan West takes on Monticello at Roscoe on January 15 as part of the Fred Ahart Games. Fallsburg hosts Tri-Valley tonight.