For the first time in many a year there will be no commemoration this month of the Battle of Minisink, but that doesn't mean that the sacrifices of the Colonial militia in July of 1779 will be … 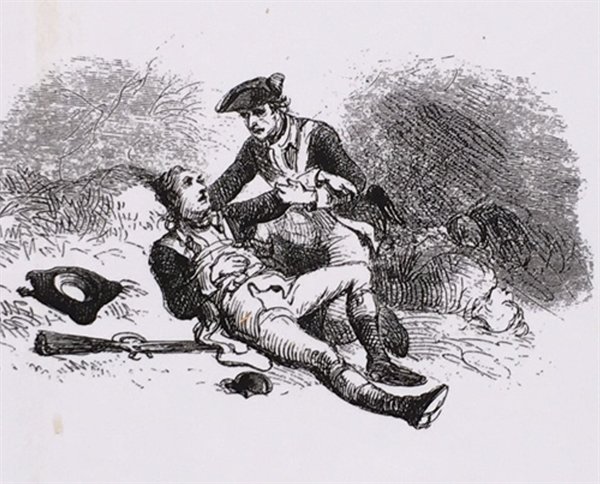 Dr. Benjamin Tusten, a Lt. Colonel in the Colonial militia, was treating wounded men at Hospital Rock during the battle when they were all killed. It is believed that 46 militia lost their lives at the Battle of Minisink.
Posted Friday, July 10, 2020 12:00 am
John Conway - Sullivan County Historian

For the first time in many a year there will be no commemoration this month of the Battle of Minisink, but that doesn't mean that the sacrifices of the Colonial militia in July of 1779 will be forgotten.

On July 20, 1779, Joseph Brant, a Mohawk chief fighting for the British, led a raiding party of Native Americans and Tories against the settlement at Pienpack, near present-day Port Jervis.

Brant had learned that a Continental Army detachment under Count Pulaski, assigned to defend the settlements in the region, had been re-deployed, leaving the area largely unprotected. Brant's objective was to gather livestock, and whatever other provisions he could find to help the British and their Native allies camped out in the Susquehanna Valley survive the following winter. If he could disrupt the Continental Army's food chain while demoralizing the settlers, that was even better.

After plundering and burning homes, killing the men and dispersing the women and children, Brant and his men took their bounty and returned northward, along the Delaware, on their way back to the Susquehanna.

Word of the raiding party soon reached Goshen, where the call went out for the militia to gather under the leadership of a local physician, Col. Benjamin Tusten.

After hotly deliberating the merits of engaging the marauders in combat, Tusten and his men - merchants, farmers and clerks, and what James Eldridge Quinlan later described as “some of the principal gentlemen of the county” - set out the next day in pursuit of their quarry.

“Colonel Tusten was opposed to risking an encounter with the subtile Mohawk chief with so feeble a command,” Quinlan wrote, “especially as the enemy was known to be greatly superior to them in numbers. The Americans were not well provided with arms and ammunition, and it was wise to wait for reinforcements.” Others, however, were for immediate pursuit. They held the Indians in contempt, insisted that they would not fight, and declared that a recapture of the plunder was an easy achievement.

“The excited militia men followed the old Kathegton (Cochecton) trail 17 miles, when they encamped at Skinner's mill, about three miles from the mouth of Halfway Brook.” The following morning, July 22, 1779, Tusten and his men, bolstered by a contingent from Warwick under the command of Col. John Hathorn, finally confronted Brant on the banks of the Delaware just above present-day Barryville.

Almost immediately, Brant deftly cut the militia's force in two and an epic battle ensued on a hilltop overlooking the river.

Ammunition was soon depleted, and the combat was reduced to hand-to-hand, with Brant's men getting much the better of it. The militia was routed, and nearly all of those who stayed and fought were killed, including Tusten.

Following the battle, Brant's forces forded the river and continued their journey. The remains of those slain on that desolate hilltop in what has become known as the Battle of Minisink were not afforded a proper burial. Quinlan wrote that “for 43 years the bones of those who had been slain on the banks of the Delaware were permitted to molder on the battle ground. But one attempt had been made to gather them, and that was by the widows of the slaughtered men, of whom there were 33 in the Presbyterian congregation of Goshen. They set out for the place of battle on horseback, but finding the journey too hazardous, they hired a man to perform the pious duty, who proved unfaithful and never returned.”

Finally, in 1822, “a committee was appointed to collect the remains and to ascertain the names of the fallen. The place where the conflict occurred, and the region for several miles around were carefully examined and the relics of the honored dead gathered with pious care. The remains were taken to Goshen, where they were buried in the presence of 15,000 persons.”

The COVID-19 pandemic has seen to it that there will be no crowd to commemorate the Battle this year, but there is no reason it shouldn't be remembered, nonetheless.

John Conway is the Sullivan County Historian. His e-mail is jconway52@hotmail.com.