Community comes to the aid of the Callicoon Theater

CALLICOON — It's been almost four weeks since the Callicoon Theater temporarily closed its doors.

The decision was made by owner Krissy Smith on March 14, a few days before Gov. Andrew Cuomo …

Community comes to the aid of the Callicoon Theater 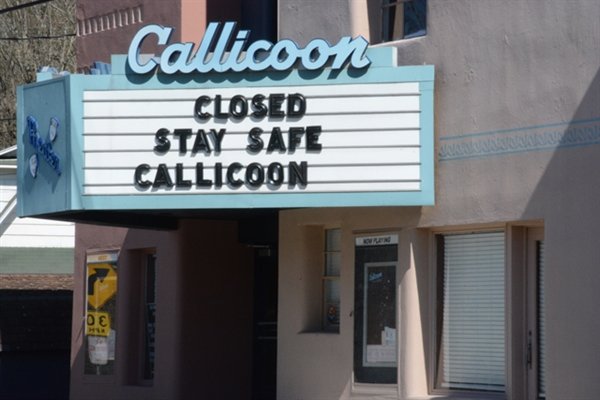 The Callicoon Theater has been closed since March 14, and members of the community have answered the call for help, donating to their GoFundMe. Funds will go directly toward operating costs like utilities, insurance, taxes and payroll assistance to staff
JOSEPH ABRAHAM | DEMOCRAT
Posted Monday, April 6, 2020 12:00 am
Isabel Braverman - Staff Writer

CALLICOON — It's been almost four weeks since the Callicoon Theater temporarily closed its doors.

The decision was made by owner Krissy Smith on March 14, a few days before Gov. Andrew Cuomo ordered all non-essential businesses in the state to close, including movie theaters, in an effort to slow the spread of COVID-19.

Smith felt like it was the right decision to ensure everybody's safety.

“We had upped our cleaning and added elements into making everything really safe for the public; but the theater is huge and it's a lot to clean. It didn't feel right, it wasn't sitting right with me that we were continuing to be open,” Smith said.

Smith, who bought the theater in August 2018, and her six employees knew that it would be difficult to survive this crushing blow to small businesses. So even though the stimulus package from the federal government might help, she got proactive from the start and set up a GoFundMe online fundraiser.

They have a goal of $15,000 and as of yesterday raised $9,647 from over 100 donors. Funds raised through this campaign will go directly toward operating costs like utilities, insurance, taxes and payroll assistance to staff.

Any funds remaining will be put toward restoring the theater and creating an outdoor movie screen for the summer months in Callicoon.

In addition to not knowing when the theater will be able to re-open, there's another problem lurking in the distance—film studios are halting production on movies, meaning even when it does open there might not be any movies to show.

“They've pulled all major film releases off the shelves throughout the entire summer, which means that even if I am able to re-open in let's say 60 days I'm likely not going to be able to enjoy any of my normal business structure,” Smith said. “Like a lot of other small businesses in Callicoon, I'm used to having a boom in the summer, which helps carry me through the winter months.”

This includes things like summer camps renting the theater, which is a huge part of their income, Smith says. And while a retail space might be able to re-open with customers practicing social distancing, or offering online sales, a movie theater can't operate in that capacity.

“I expect that there's going to be a very different relationship towards people coming together in the same physical space for a little while. I think people are going to be a little trepidatious about that,” Smith remarked.

In the meantime, Smith is getting creative. She's partnered with Magnolia Pictures to rent movies from the theater's website. Currently the options include “Slay the Dragon,” a new documentary about gerrymandering and the 2020 Census, and “Once Were Brothers: Robbie Robertson and the Band,” a documentary about The Band that takes place in Woodstock, NY.

A percentage of the rental profits go to The Callicoon Theater (prices vary depending on the film). Smith said she is also looking into showing old movies when the theater is able to open, offering outdoor screenings and selling merchandise like tote bags and hats.

Through all the bad news going on, Smith sees a shining light: people are supporting small businesses in ways they never have before.

“I want to make sure everybody knows how grateful I am that they've been supporting the campaign and a big thank you to the entire community for rallying around this,” she said. “I'm also just really grateful that everybody in the community is so educated about how this is affecting small business owners right now.”

To donate to the campaign, go to www.gofundme.com/f/cdsj8. For more information and to rent movies, go to www.thecallicoontheater.com.