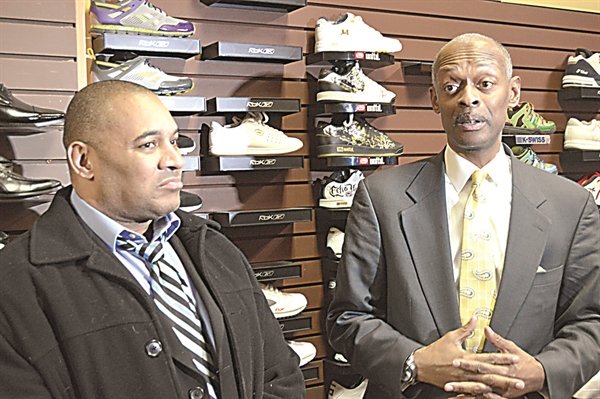 A rally was held in February for Mayor Jenkins, left, with National United Youth Council Director Salaam Ismial. A petition in support of the mayor was presented to the media that night. Ismial, in an email, called the mayor's incarceration “a public lynching.”
fiogf49gjkf0d
Democrat File Photo
Posted Thursday, April 2, 2015 12:00 am
Matt Shortall - Staff Writer

The court concluded that Jenkins exhibited “unscrupulous conduct and gross dereliction of duty that connotes a pattern of misconduct and abuse of authority.”

In 2013, a suit was filed by Monticello residents Michael Greco, his wife Adrianna Mayson-Greco, Julian Dawson and Elaine Williams. It was handled by attorney Kirk Orseck of Orseck Law Offices in Liberty and sought the removal of Jenkins based on his conduct through his two terms in office.

Orseck provided a press release, reprinted in full at the end of this story.

The suit received bolstering when, last November 6, Referee Eugene E. Peckham determined and recommended that the mayor's office be “immediately” vacated. Peckham had been chosen by the court to conduct hearings and hear witnesses last fall.

• that Jenkins used the threat of withholding funding from the police department in order “to influence the disposition of criminal charges against him”;

• that his tirade the night of his arrest for DWI, caught on police station surveillance video, indicated that he sought “to use his position as Mayor and Village Manager to obtain ‘special treatment' from the Village's police department with respect to his various criminal charges and has repeatedly threatened various local law enforcement officials with termination or disciplinary action for pursuing such charges against him.”;

• and finally, Jenkins was found to have hired a local firm through a no-bid contract to demolish the asbestos-laden old village court building. He allegedly made the decision without board approval and “directed or permitted the illegal disposition of the debris. These actions exposed the Village to substantial costs and liabilities, and respondent thus violated a public trust.”

The judgment noted, “Although the Referee's findings are not binding upon this Court, they serve to ‘inform our conscience.'”

Village of Monticello Trustees will meet at their regular meeting Tuesday, April 7 to appoint an interim mayor until it can be decided on how to proceed.

There currently is no designated deputy mayor in the village of Monticello. The last person to hold that position was Larissa Bennett, who was both appointed and then removed from that position by Jenkins.

“It's a big shock,” said Bennett yesterday. “Everyone had been talking about this for a long time, and now it's actually happened.”

Bennett had acted as deputy mayor earlier this year when Jenkins was serving a 45-day jail sentence for disorderly conduct and obstructing governmental administration.

“I knew Gordon as a person,” said Bennett. “Despite the things that may have happened, or the things he may have chosen to do, I think he was a good board member.”

Jenkins was a village trustee before being elected mayor in 2008. He was re-elected in 2012 and his term was to expire in March 2016.

Trustee Carmen Rue expressed her desire to hold a special election by the third week of June to elect a new mayor. “I think it's more important to let the people of Monticello choose their new mayor instead of the board simply appointing one itself,” said Rue. “I believe in the election process.”

Nevertheless, there are problems with holding a special election in June. “After talking to our village attorneys, I'm not sure there's enough time to organize a special election,” said Trustee and former Village Police Chief Doug Solomon. “And if there was then it would throw off the normal election cycle.”

“I think they made a good decision,” said Solomon of the court. “Hopefully now the village can return to some semblance of normalcy and stability.”

Trustee Jill Weyer could not be reached for comment.

When contacted yesterday, Jenkins said he had just been informed about the decision and wanted to take a look at the ruling before commenting on it.

His lawyer, Michael Sussman, was out of town and not available for comment.

On behalf of the Petitioners, the People of Monticello and all those who rendered their invaluable assistance in this matter, we would like to say that we are profoundly encouraged by the Appellate Division's decision to remove Gordon Jenkins from office.

This has been a long and arduous process. Removing an elected official under New York law is a very rare and difficult process. And that is exactly as it should be. The Legislature and the Courts have rightly determined that, once the electorate puts a person into office, only acts of great moral turpitude or gross violation of the public trust would justify the judiciary in removing that person from office. Unfortunately, and to the embarrassment of Monticello and our county, Gordon Jenkin's actions exceeded even these difficult criteria.

Referee Eugene Peckham, and the Appellate Division determined, in well researched and carefully worded opinions, that Gordon Jenkins should be removed from office. They found that he had attempted to wrongly influence the police department to get special dispensation as to his criminal charges. They found that he had also threatened those police officers who had arrested him for driving while intoxicated. They found that his suspicious conduct regarding the demolition and debris of the old Monticello Courthouse rose to the level of unscrupulous conduct and gross dereliction of duty. Finally, they found that Jenkin's administration was over shadowed by an overarching pattern of misconduct and abuse of authority.

As a final note, we would like to express our disappointment concerning Gordon Jenkin's incredible claim that his removal is predicated on reasons of race. Several impartial judges have gone through unusual lengths to make their determinations as precisely and fairly, as they could possibly be. It is irresponsible of Mr. Jenkins to dilute the credibility of legitimate discrimination cases by associating his unscrupulous behavior with those noble and difficult struggles.

Again, we're enthused that the courts have agreed to remove Gordon Jenkins from office. Looking forward, we're optimistic that the new Village of Monticello Board and Manager will bring a renewed sentiment of credibility and prosperity to the Village.