About a week ago I got a new cat, named Daisy delivered to my house. The reason she was delivered is because she is so wary of the carrier that she throws up when placed in one and the rescue place … 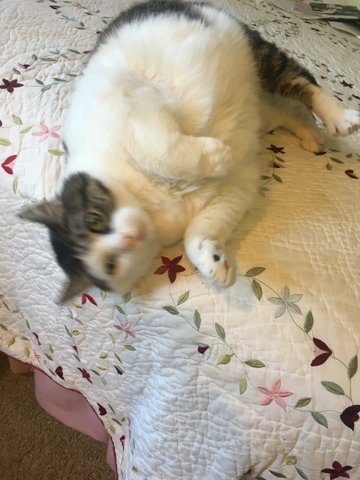 About a week ago I got a new cat, named Daisy delivered to my house.
CONTRIBUTED PHOTO
Posted Thursday, March 25, 2021 12:00 am
June Donohue - Columnist

About a week ago I got a new cat, named Daisy delivered to my house. The reason she was delivered is because she is so wary of the carrier that she throws up when placed in one and the rescue place called CLAWS didn't want me to have to deal with that.

I registered with a few rescue agencies and looked at pictures of cats available online. I had picked one out over a month ago, named Lilly and then hadn't gotten a call back regarding her for weeks.

I surmised that either they were troubled about my age (even though I had assured them that I had designated someone to take care of the cat when I was no longer able to), she had been adopted by someone else or the foster mother had decided to keep her. The last possibility was exactly what had happened.

Daisy is five years old and she looked adorable in her picture so I called CLAWS right away and got an immediate return call. One of my questions I asked was how did she wind up getting put in a shelter.

Poor Daisy had been in and out of many foster homes. She came to the shelter as a kitten, along with her brother, who got adopted right away. Daisy went to a home with a teenage girl who wanted a cat. When she went to camp for six weeks Daisy didn't take that well and the father wasn't getting along well with Daisy so back to the shelter she went. The mother MAY have made the right choice to get rid of the cat instead of her husband. I don't know the man so I can't say.

The next home Daisy went to was a good one but an adult son of theirs had to move back home and he had asthma and was extremely allergic to the cat, so back to the shelter she went again.

After that she went to a home that had seven cats and when that family moved they could only take three. Daisy wasn't too happy in that home anyway because she'd rather be TOP CAT in a home that only had her and that's where I came in.

At the shelter the workers thought they were doing her a favor by giving her extra food so she is extremely overweight as you can see by her picture. When she walks or runs up and down my hall, she actually waddles. She is on a diet and came with low calorie food and is already losing some weight.

Daisy has her own room but prefers to sleep with me. She takes up most of the bed and likes to lie on my stomach when I'm awake. She has finally found a home and will stay with me until death do us part.