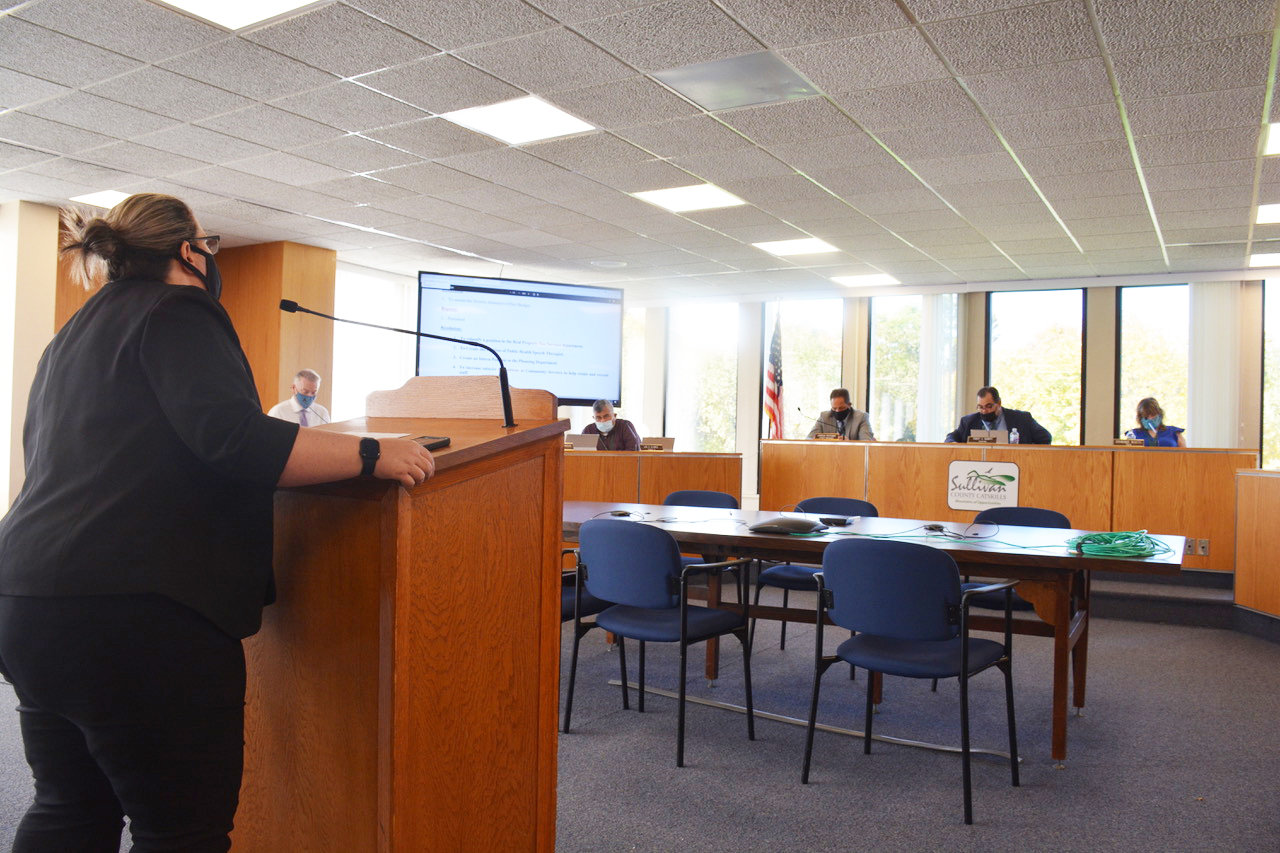 MONTICELLO – A resolution submitted by District Attorney Meagan Galligan for consideration at the county legislature’s Human Resources Committee meeting was not the same one that came out of the Steering Committee, which met just prior to the start of Thursday’s meetings.

The Steering Committee, consisting of the Majority Leader, Minority Leader, Chair and Vice Chair, is a mechanism for discussing policies and resolutions before they’re presented to the full legislature, and is different from a caucus where legislators of the same political party meet.

At the conclusion of an hour-long discussion, members of the Human Resources Committee voted to move the resolution originally submitted by Galligan to Executive Committee this coming Thursday. Legislator George Conklin said they were trying to do the right thing for Galligan, while also trying to protect the taxpayer.

“I don’t think anybody here has any malice toward you, your department or people who work for you,” said Conklin. “We all support you and want to do what’s right.”

Galligan told Conklin she appreciated that and his commitment with respect to supporting her office.

However, she did express concern over “the blind side with a stripped-down resolution.”

Prior to submitting the resolution, Galligan recently had a close to three-hour negotiating session with Legislative Chair Rob Doherty, before meeting with both caucuses.

In further comments on Friday, Galligan told the Democrat, “I was disappointed to have invested a lot of time in what I believed were good faith negotiations, only to discover an apparent unwillingness on the part of someone in our County’s government to follow through.

“I’m glad that, at the end of the day, the agreement we struck was passed on to the [Executive Committee] and I look forward to the continued support of those Legislators who’ve given me their word that the deal we struck is the deal that will pass next Thursday,” she continued. “My Assistant District Attorneys work hard to do the right thing every day. I hope our Legislators do the right thing for them and for public safety.”

A new two-tiered system
Currently, the DA has to return to the legislature and ask for raises for certain positions. In both drafts of the proposed resolution, a new two-tier system for the office’s eight assistant district attorneys (ADA) would be created. In Tier 1, the ADAs with the most experience would handle the more serious crimes. The less experienced ADAs would be in Tier 2.

‘Package deal’
The resolution that came out of the Steering Committee, as explained by Galligan at Thursday’s meeting, did not include the creation of two administrative assistant positions, effective January 1, 2022, the creation of two stipends to be given at the discretion of the DA to an ADA for certain work, and a commitment to have a conversation about an annual cost-of-living adjustment (COLA) beginning no earlier than the 2023 budget.

The COLA would be separate from the built-in raises of the two-tier system the resolution would create.

Galligan told legislators that she agreed to lower salary increases because of these other items as part of a “package deal.”

While there was some talk between Galligan and the legislature about the stipends and administrative assistant positions, the largest portion of the discussion centered around the COLAs.

Galligan’s position
Galligan told the Democrat that cost-of-living adjustments were specifically discussed in both caucuses she had with the legislators.

She said the elimination of the COLA language from the resolution that came out of the Steering Committee concerns her, as she is afraid that when an ADA moves from one step to another, the legislature would decline to apply a cost-of-living adjustment to that position, citing the “raise,” or step increase.

During Thursday’s meeting, Doherty brought up a paragraph in the Steering Committee’s version of the resolution where Tier 1 ADAs would be compensated as follows with, “periodic merit-based increases to be awarded consistent with the annual budget appropriations for other management positions.”

On Thursday, Galligan told the legislators that she isn’t asking the legislature to guarantee the implementation of cost-of-living increases. “All that I proposed in my resolution was a commitment from this board to have a discussion.”

On Friday, Galligan told the Democrat that she memorialized the entirety of the deal into one resolution to specifically foreclose the possibility that lower salaries than she requested would be implemented, while the stipends, additional staffing and other agreements that were negotiated, fell by the wayside.

The Chair on COLAs
Doherty said he supports the two percent annual raises for Tier 2 ADAs, and believes that Galligan’s resolution currently does not establish raises for those in Tier 1.

“I have no interest in giving people who are on a seven-year step system [Tier 2 ADAs], also receiving two percent raises annually, a COLA on top of it,” said Doherty in an interview on Friday. “But I’m all for creating a mechanism for the top people [Tier 1 ADAs] to do that. They would be treated as management confidential employees, for raise purposes only, and they’d receive whatever management confidential people receive, which changes from year-to-year, but generally speaking, is anywhere from 2-3 percent.”

Doherty added that no Republican in their caucus agreed to COLAs.

When asked if there was any talk about the possibility of a discussion on COLAs on an annual basis, Doherty said, “George [Conklin] spoke up to that and said, ‘You have the right to discuss whatever you want with the County Manager during the budgetary process from July 15 to October 15 annually. We don’t have to put it in writing.’”