MONTICELLO — The Sullivan County Legislature on April 16 voted to approve a resolution abolishing positions in the county as a result of the economic impact of the coronavirus pandemic. 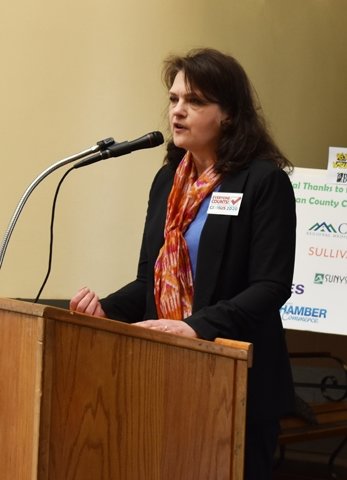 MONTICELLO — The Sullivan County Legislature on April 16 voted to approve a resolution abolishing positions in the county as a result of the economic impact of the coronavirus pandemic.

Some departments were hit especially hard, including the Clerk's Office, Community Services, Department of Public Works (DPW) and the Division of Planning, Community Development and Real Property.

Those offices are saying they cannot operate with a reduced staff.

In a letter from E. Danielle Jose-Decker, President of the Sullivan County Bar Association, County Clerk Russell Reeves said due to layoffs the Clerk's Office will be without staff to process land filings or civil filings as of May 2.

There will be one staff member handling all of those things, and this will likely bring real estate transactions to a halt, the letter states.

Other department heads have expressed that the layoffs will cause disruption in their department's tasks. Planning Commissioner Freda Eisenberg appeared before the legislature during a special meeting yesterday morning to ask for positions to be reinstated.

She said the Planning Department is currently managing $4 million worth of grants that takes close to the number of positions that they are left with. She added that they could help the county secure grant funding to help with the impact of the crisis.

“We have a team of young dedicated professionals who can pivot to what the county needs at this time,” Eisenberg said. “Recovery is going to be a challenging process. We've been working with [Deputy County Manager] John Liddle and the recovery group. And that recovery is going to take resources, resources that I believe the Planning Department can provide.”

During public comment at the same special meeting, a letter was read by Ray Stanishia, Recording Secretary/Business Agent for Teamsters Local 445. The letter includes statements from several county employees who have been laid off explaining why their positions are essential.

“I would like to take a moment to outline and illustrate the impact the pending layoff will have not only on the workforce and their families, but also on the community and those receiving the essential and necessary services provided by the dedicated employees,” Stanishia wrote.

The letter says that there will be more drug overdoses and deaths by suicide, due to layoffs within the Community Services department. Therapists have been working from home providing tele-health services and cannot serve the number of clients.

On the agenda were two resolutions, the first is to cut positions from DPW and the second was to amend the prior resolution to reflect those changes.

District 2 Legislator Nadia Rajsz questioned if those positions would be considered essential, and the department would come back and say they need to be added back.

She said, “We seem to be having a lot of issues with these furloughs and layoffs. Are these critical positions that are going to impact on this departments' functionality?”

County Manager Josh Potosek said he's had discussions with DPW Commissioner Ed McAndrew and the department had already been working on a “week on, week off” schedule, meaning only 50 percent of the workforce was working each week, so it won't have a big impact.

Legislator Luis Alvarez also asked if McAndrew was on board with the proposed cuts. Potosek said that he was and that the list was worked on with him.

Rajsz said that after the first layoffs county department heads said they “had no clue” of who was being cut.

“We can't be cutting people without discussing this with commissioners or department heads and then finding ourselves in a jam,” Rajsz said.

Legislator George Conklin jumped in to say they don't have a crystal ball to look into the future, and things can come up.

“These are uncharted waters, and there are going to be some modifications that are going to need to be made,” Conklin said.

Potosek reiterated that cuts are being made to save money in the county budget, which will save the county $250,000 a month.

He said they still don't know what the economic impact will be from the COVID-19 pandemic, but will likely have a better picture mid-May.

He also said that while the resolution says employees are furloughed until July 1, it is possible some employees can come back before then.

Legislature Chairman Rob Doherty said, “If we don't do this now there will be people who lose their job permanently. This is a three-month situation, some of them will come back before as the financial picture becomes clearer.”

The meeting was recessed to Wednesday, April 29 at 3 p.m.