WURTSBORO -- Sixteen years ago, three-time past fire chief and current chairman of the Wurtsboro Fire District's Board of Commissioners, Bill Lothrop, was put on a path by the late John Bryan. The … 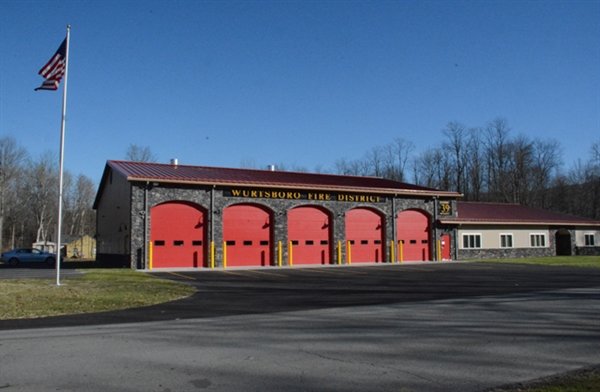 The new Wurtsboro Firehouse sits on the corner of Canal and Pine Streets in the Village of Wurtsboro.
JOSEPH ABRAHAM | DEMOCRAT 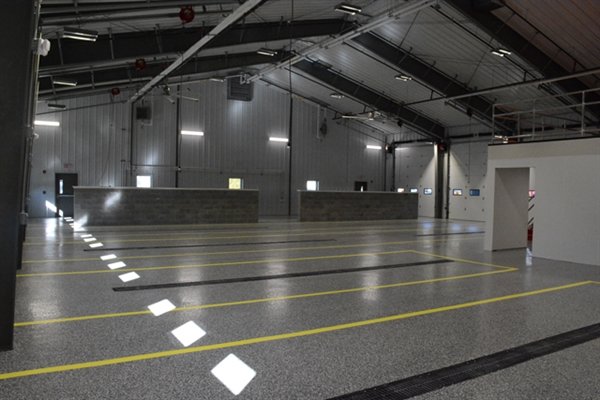 At easily five times greater a space than where they currently reside, the new Wurtsboro Firehouse will provide a much better fit for their trucks.
JOSEPH ABRAHAM | DEMOCRAT
Previous Next
Posted Monday, November 23, 2020 12:00 am
Joseph Abraham - Co-editor

WURTSBORO -- Sixteen years ago, three-time past fire chief and current chairman of the Wurtsboro Fire District's Board of Commissioners, Bill Lothrop, was put on a path by the late John Bryan. The hope was that path would lead to a new firehouse.

On December 1, when the approximately 70 members of the Wurtsboro Fire District, its company and fire department move into their new firehouse located at the former Town of Mamakating Highway Department Building at the corner of Canal and Pine Streets, that path will have been realized.

The Wurtsboro Fire District was established in 1990. According to Lothrop, when the Town of Mamakating built their new highway department building on Route 209 in the early 2000s, the property where the new firehouse is located became available. Bryan, the board of commissioner's chairman at the time, knew they would need to move as they had long outgrown their current space.

The district purchased the old highway barn with anticipation that, one day if they did build a new firehouse, they'd at least have that property.

In 2004, Bryan and Lothrop sat down and began the planning process of what a new firehouse would look like.

“By 2009 we were ready to go, but there was opposition in the community and within the fire department because there were people who didn't want to spend money on a new firehouse and didn't want to give up the old firehouse,” said Lothrop.

However, the need for more space was obvious.

Bryan passed away in 2011, and Lothrop, who became the new chairman, continued moving things forward.

They entered the design phase in 2014 and went to the voters in 2017, presenting them with a package that Lothrop said the Board of Fire Commissioners knew wouldn't pass, because it was too expensive.

The district went back to the drawing board and hired Wurtsboro-based Horton Malone Architecture, who came up with the design for a $3.9 million firehouse that was overwhelmingly passed by voters in February 2019 to the tune of 233 votes in favor and 55 against.

The firehouse is bonded for 25 years, costing homeowners with an assessed property value of $100,000 less than $5 a year. Also, the district has an agreement in place for several years to stay within the tax cap.

“We couldn't ask for a better group of people,” said Lothrop. “It became a very personal project. They really came together and we're extremely pleased we had all those people involved. Everybody from them to the guy who came and put up the flagpole. They were so proud because they knew where we were coming from and where we needed to be.”

According to Lothrop the new firehouse is easily five times the size of the Sullivan Street location they've called home since the 70s, and rented from the Village of Wurtsboro for the past three decades.

“We couldn't move in the old building,” said Lothrop of the space constraints, “and it was no longer OSHA compliant, but this building is.”

In addition to the expanded size, which provides a better fit for fire trucks, the new firehouse also includes a fire hall, which will be used for meetings, training, events (for both the department and district residents who can rent the space); office space for the fire chiefs, ladies auxiliary, and board of commissioners; a dual console radio system; men and women's bathrooms with full showers; and a conference room that will be utilized as a space for board of commissioners meetings.

The old firehouse had no space for offices, no parking spaces, and the meeting room had to be used for everything -- social functions, training, etc.

All doors at the new firehouse operate on fobs, one of which separates the department from the area where the general public would enter for public meetings or fire hall events.

The firehouse's mechanicals are located at the back of the building, which borders the D&H walking trail. The building is completely air conditioned and there is a generator which will be able to run the entire building in case of a storm.

The new firehouse also brings everything under one roof, as they'd previously been running two buildings, the old firehouse and the former highway department building, which stored overflow equipment.

Reflecting on the process, Lothrop praised the five fire commissioners which make up the district's board.

“We are all opinionated, but in the end it's always a collective yes or no,” said Lothrop. “We compromise and get it done.”

Lothrop hopes the community can look at the new firehouse and feel proud that their fire department has a nice building from which to operate.

“As a taxpayer myself, living in this community, I think they recognize the fire department is the hub of the community,” he said. “Whether it's Wurtsboro, Lake Huntington or Narrowsburg, I believe people as a whole look to their fire department for guidance and help in good times and in bad.”

Lothrop proudly calls Bryan a mentor, and said he is sorry that Bryan and many others who he grew up with in the department are not here to see this accomplishment.

Lothrop noted it's been a long 16 years but he's proud of the fire district, his fellow commissioners and firefighters.

“It makes me very pleased that in the next week we will move into this building,” said Lothrop, “and that we have a new home for more than the next 50 years.”