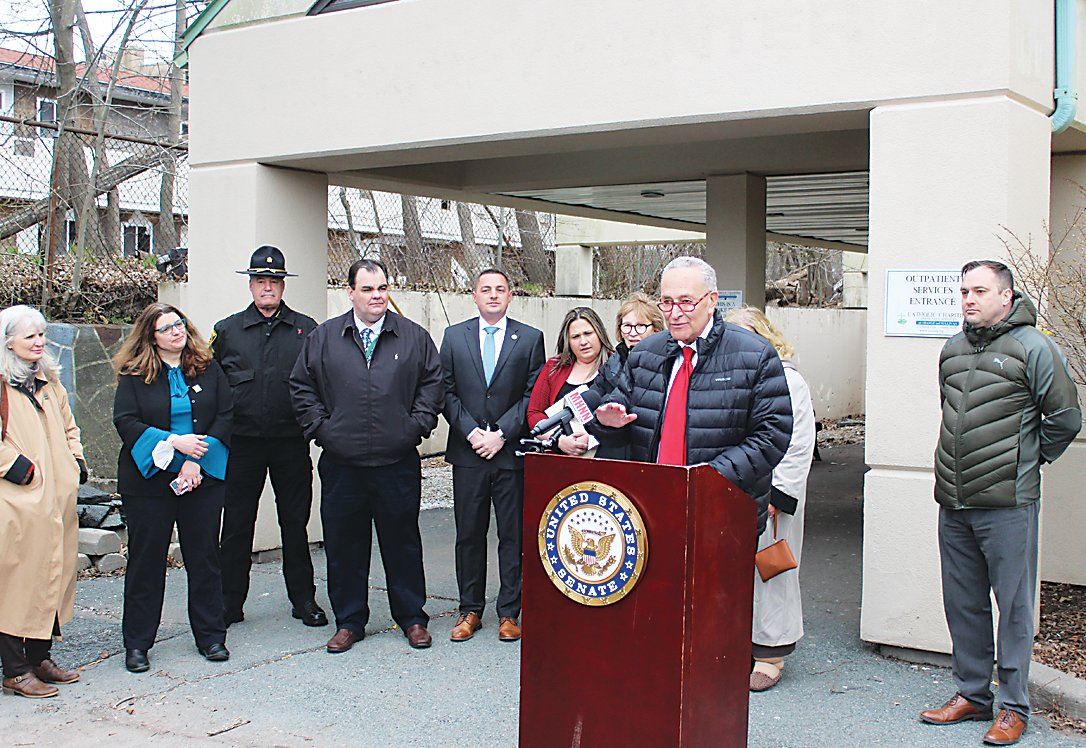 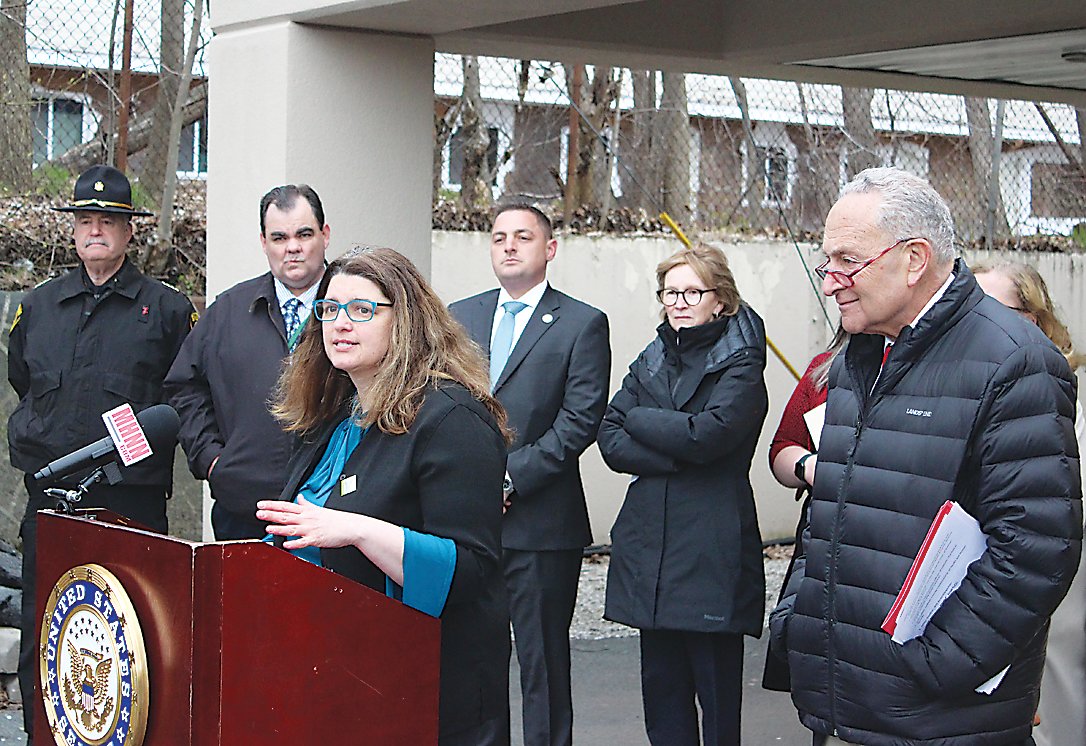 Shannon Kelly, Chief Executive Officer at Catholic Charities, said that working together with local, regional and federal partners to secure more permanent resources would be the most effective path forward in addressing the opioid epidemic.
Matt Shortall | Democrat
Previous Next
Posted Friday, April 22, 2022 6:10 am
By Matt Shortall

MONTICELLO — The scourge of the opioid epidemic continues to destroy lives in Sullivan County even  as local officials and organizations continue to address the problem on multiple fronts.

Twenty percent of all deaths in Sullivan County in the month of March were opioid related.

“That’s a frightening, tragic statistic,” said Senator Chuck Schumer. “Sullivan County has the highest opioid overdose death rate in all of New York State. We need federal help and resources to beat this back.”

Senator Schumer visited the Catholic Charities office on Broadway in Monticello on Monday afternoon to announce further efforts to confront the opioid crisis nationally and in Sullivan County.

Flanked by State and county representatives, as well as public health officials, Schumer called for Sullivan County to be approved as a High Intensity Drug Trafficking Area (HIDTA). Sullivan is the only county in the Mid-Hudson region without such a designation.

“With 20 percent of all deaths last month being opioid-related, the federal government must do its part in defeating the opioid epidemic that has claimed far too many of our loved ones in Sullivan County,” Senator Schumer said. “While our first responders, public health experts and advocates have worked tirelessly to combat this growing problem, they need more federal support.”

Schumer called on the director of the Office of National Drug Control Policy, Rahul Gupta, to approve Sullivan County’s HIDTA designation and said that it would unlock more federal funding as well  greater coordination amongst federal, state and local law enforcement agencies to target drug traffickers.

“Over the years, HIDTA has provided millions of dollars to upstate New York’s law enforcement agencies,” Schumer said. “The Hudson Valley was one of the first to receive HIDTA funding way back in 1994, but Sullivan County was left out and still is.”

Schumer added that he’s pushing for a $3.2 billion increase in funding for National Drug Control Program agencies in the upcoming federal budget which he said would help support evidence-based prevention treatment and addiction recovery services.

Only a few hours before Senator Schumer’s visit on Monday, Monticello Police Officers and Mobilemedic EMS responded to an apparent drug overdose in the parking lot of the county government center. Five doses of nasal Narcan were administerd to an upresponsive 46-year-old man, who was then transported Garnet Medical Center - Catskills in stable condition.

“We cannot do this alone. We need resources, including from our federal partners,” said Sullivan County District Attorney Meagan Galligan standing outside of Catholic Charities that afternoon.

“None of us is as strong as all of us,” added John Liddle, Sullivan County’s Division of Health and Human Services Commissioner. “It’s so wonderful to have support from key leaders around the state.”

Liddle recalled a visit by New York State Attorney General Letitia James back in January to help cut the ribbon on Bridge Back to Life - a new mobile health unit which now brings medical and substance use services to communities across the County.

“We are getting to all corners of the county with mobile treatment facilities,” Liddle said. “We are really building up our capability and that’s all about easing access to care.”

According to the New York’s most recent county level preliminary data, Sullivan County in 2020 had an overall opioid overdose death rate of 64.2 per 100,000 population. That is nearly three times the state average of 22.1, excluding New York City.

As reported in the Democrat on April 12, the Sullivan County Coroner’s office reported that 42 of its 296 cases in 2021 were overdose deaths.

“Fifteen percent of all the deaths in Sullivan County for the year 2021, you can attribute to the opioid crisis that we have,” County Coroner Albee Bockman told legislators.

“We need help from everyone who’s willing to give us help in terms of solving this,” said Senator Mike Martucci outside Catholic Charities on Monday. “Without all of us working together on this important issue we would not be successful.”