FORESTBURGH – Litigation is being brought against the Town of Forestburgh and two town officials by Lost Lakes Holdings LLC (LLH) and Mishconos Mazah LLC (MM).

The lawsuit comes after … 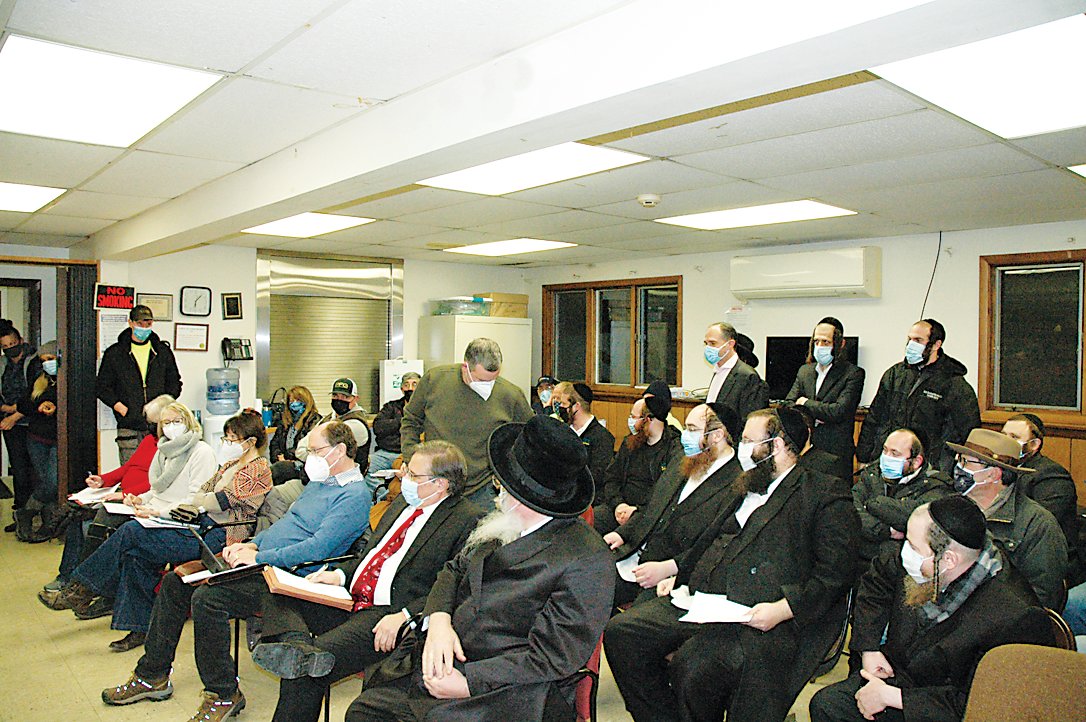 At the public hearing on February 3, many voices made clear their opinions before the Board eventually voted in favor of passing the three-month moratorium.
Derek Kirk | Democrat
Posted Tuesday, March 15, 2022 6:36 am
By Fred Stabbert III

FORESTBURGH – Litigation is being brought against the Town of Forestburgh and two town officials by Lost Lakes Holdings LLC (LLH) and Mishconos Mazah LLC (MM).

The lawsuit comes after altercations erupted at last month’s board meeting between attorneys for the development and the town regarding an adopted three-month moratorium on building permits and claims of misuse of escrow account funds.

According to papers filed in State Supreme Court on February 28 and served this past Friday afternoon to town officials, the developers of Lost Lake Development are suing the Town of Forestburgh over what they claim is the unlawful use and misappropriation of the Lost Lake escrow account.

Attorney Javid Afzali of Harris Beach, PLLC, is representing the town in the lawsuit and he said yesterday morning that he was planning to meet with town officials yesterday to form a response.

The response, which was not ready at presstime, will appear in Friday’s Demo­crat.

The plaintiffs in the case are Lost Lake Holdings LLC (LLH) and Mishconos, LLC, (MM), which are owned by Hasidic Jewish investors.

In July 2020, LLH and MM purchased the development, which included the Project Site and all right, title and interest to the Project and its approvals, including the Planned Development District rezoning and the Phase 1 approvals.

Pursuant to the purchase, LLH and MM also became the beneficiaries of the funds held in trust by the town in the Lost Lake Escrow.

According to the suit, the Lost Lake Escrow account was established according to Forestburgh Town Law and was designed to pay for professional consultant fees in connection with the review of the development.

Last month, the town Board adjourned their February Regular Town Board meeting stating they planned on proposing a resolution that would amend the escrow account law in place.

However, the suit further alleges that when the purchase of the project by members of the Hasidic Jewish community became known, Supervisor Hogue and Planning Board Chair Robbins colluded to cause the misappropriation and misuse of the Lost Lake Escrow for multiple unlawful purposes.

The suit claims town officials used that money to hire special counsel – Javid Afzali of the law firm Harris Beach – for legal services regarding the project, although no applications for building permits had yet been filed.

The suit further claims that Mr. Robbins, with Mr. Hogue’s consent, recommended that attorney Charles Voss be retained to provide planning and related consulting services to the Planning Board regarding the project. The town board approved all hirings, the suit claims.

How it all began

According to the suit, the Lost Lake Escrow was established in 2008 when the former owner of the Project Site applied for a Planned Development District (PDD) rezoning of the project site for the seven-phase Lost Lake Development.

The Town Board approved the PDD rezoning in 2011 and granted subdivision and site plan approval for Phase 1 of the Project in 2013.

Since the approvals, there have been no more applications to the Town Board or Planning Board for any project-related approvals.

The site, which LHH and MM believed was shovel-ready, required only building permits for home construction to commence.

• to obstruct, delay, and, if possible, prevent the members of the Hasidic Jewish Community from purchasing homes in Lost Lake by delaying, obstructing and preventing issuance of building permits for construction of homes that Rabbi Halberstam, principal of LLH and MM, intended to offer at a reasonable rate to members of the Hasidic Jewish Community; and

• to obstruct, interfere with, and deprive LLH and MM of their vested property rights in and to the PDD Zoning and Phase 1 approvals by depriving them the ability to build homes.

The suit seeks to have the town repay funds back to the escrow account that were allegedly unlawfully disbursed and to prevent further expenditures from the account unless those costs are for expenses described in town law.

The suit is also seeking cost and reasonable attorneys’ fees associated with the suit and the repeal of the three-month moratorium law passed at the last meeting.

Two letters – one on November 12 and the other on January 21 – from the developers to the town demanding an accounting of the Lost Lake Escrow account and return of funds expended went unanswered.

Supervisor Dan Hogue did not return a call for comment.