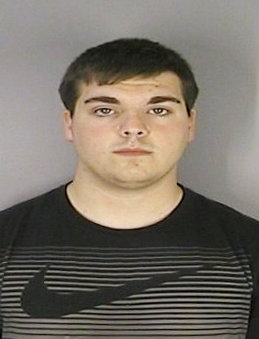 SULLIVAN COUNTY — Sullivan County District Attorney Meagan K. Galligan announced that Jordan Zimmer, 22, of Narrowsburg, New York, was sentenced to state prison today for his serious assault of a teenager in August 2020. Zimmer pled guilty to Assault in the Second Degree, a violent felony, in July, admitting that even though the victim refused to engage in a physical fight with him, he prepared himself with a mouthpiece and caused serious physical injury to the teen by beating him in the face. The victim required multiple surgeries and corrective procedures. Sullivan County Court Judge Jim Farrell sentenced Zimmer to four years in prison with three years of post-release supervision and additionally entered an Order of Protection directing Zimmer to permanently stay away from the victim and the victim’s family.

Galligan said, “Zimmer intentionally sought out this victim for the sole purpose of assaulting him. My thoughts remain with the victim and his family.”

Sheriff Mike Schiff said, “I want to thank the District Attorney’s Office for aggressively pursuing this case and holding this defendant accountable.”

Galligan thanked the Sullivan County Sheriff’s Office and the police members of her Office for their commitment to this case and justice for this victim.

Zimmer was immediately remanded to the custody of the Sheriff pending transfer to the Department of Corrections and Community Supervision.