Before the Revolutionary War the 13 colonies were important to England for many reasons, foremost was the crops that could be grown here. Corn, cotton, sugar and hemp. 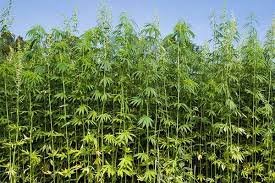 Before the Revolutionary War the 13 colonies were important to England for many reasons, foremost was the crops that could be grown here. Corn, cotton, sugar and hemp.

Hemp, from Old English hÊnep, is a commonly used term for the high-growing industrial varieties of the Cannabis plant and its products, which include fiber, oil, and seed. Hemp is refined into products such as hemp seed foods, hemp oil, wax, resin, rope, cloth, pulp, paper, and fuel.

Hemp is not to be confused with the close relative of the herb Cannabis which is widely used as a drug, commonly known as marijuana. Marijuana variants are typically low-growing and have higher content of tetrahydrocannabinol (THC).

Hemp, which is bred for low THC content, is used for many varieties of products including the manufacture of cordage of varying tensile strength, durable clothing and nutritional products. Hemp seeds can be eaten raw, ground into a meal, sprouted, hemp juice, prepared as tea, and used in baking. The fresh leaves can also be consumed in salads.

Hemp fiber has been used extensively throughout history, with production peaking soon after being introduced to the New World. Items ranging from rope, to fabrics, to industrial materials were made from hemp fiber. Hemp was often used to make sail canvas, and the word canvas derives from cannabis. Today, a modest hemp fabric industry exists, and hemp fibers can be used in clothing.

Pure hemp has a texture similar to linen. The first identified coarse paper, made from hemp, dates to the early Western Han Dynasty nearly 2,000 years ago in China. In 1916, U.S. Department of Agriculture chief scientists, Lyster Hoxie Dewey and Jason L. Merrill, created paper made from hemp pulp and concluded that paper from hemp was “favorable in comparison with those used with pulp wood.”

Hemp rope was used in the age of sailing ships. Biodiesel can be made from the oils in hemp seeds and stalks and alcohol fuel, ethanol, from the fermentation of the whole plant. Filtered hemp oil can be used directly to power diesel engines, just pour it in.

In 1892, Rudolf Diesel invented the diesel engine, which he intended to run on a variety of fuels, especially vegetable and seed oils, which earlier were used for oil lamps.

So after hearing all about this somewhat wonderful plant with all its uses you might ask why it isn’t grown here anymore. Hemp was made illegal to grow without a permit in the United States since 1970 because of its relation to marijuana.

The true problem is that you cannot tell the difference between the hemp plant and marijuana by simply looking at it. It would have to be chemically tested and for this reason the government banned all cannabis.

In 2013, after the legalization of marijuana in the state of Colorado, several farmers planted and harvested several acres of hemp, bringing in the first hemp crop in the United States in over half a century. Maybe within the next 20 years hemp may be grown again in the Hudson Valley like it was nearly 200 years ago.

How to tend to your lawn