LAKE HUNTINGTON - Every basketball game has a life of its own, unique in its own right and impossible to predict with certainty. For the 6-1 James I. O’Neill Lady Raiders, a team that … 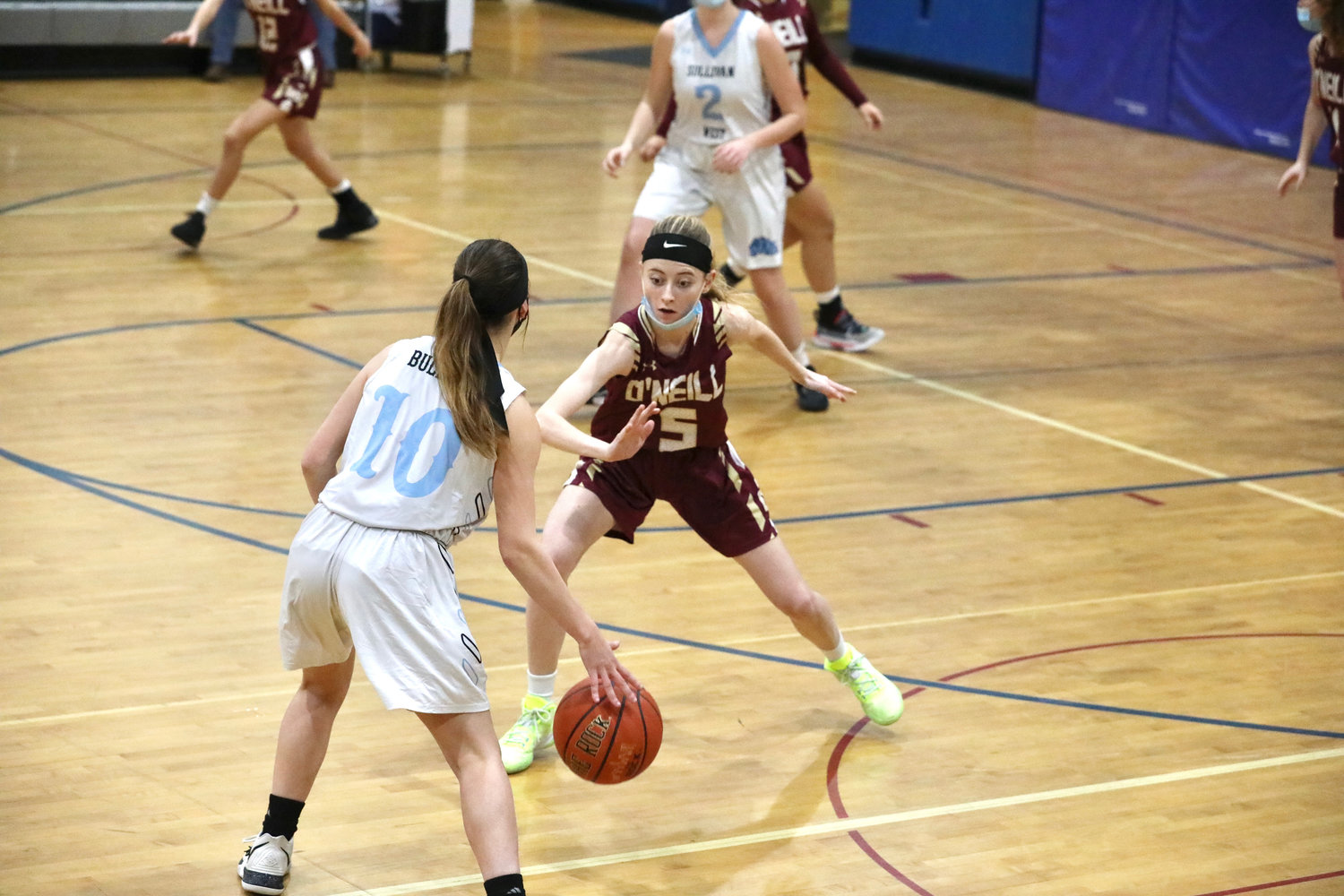 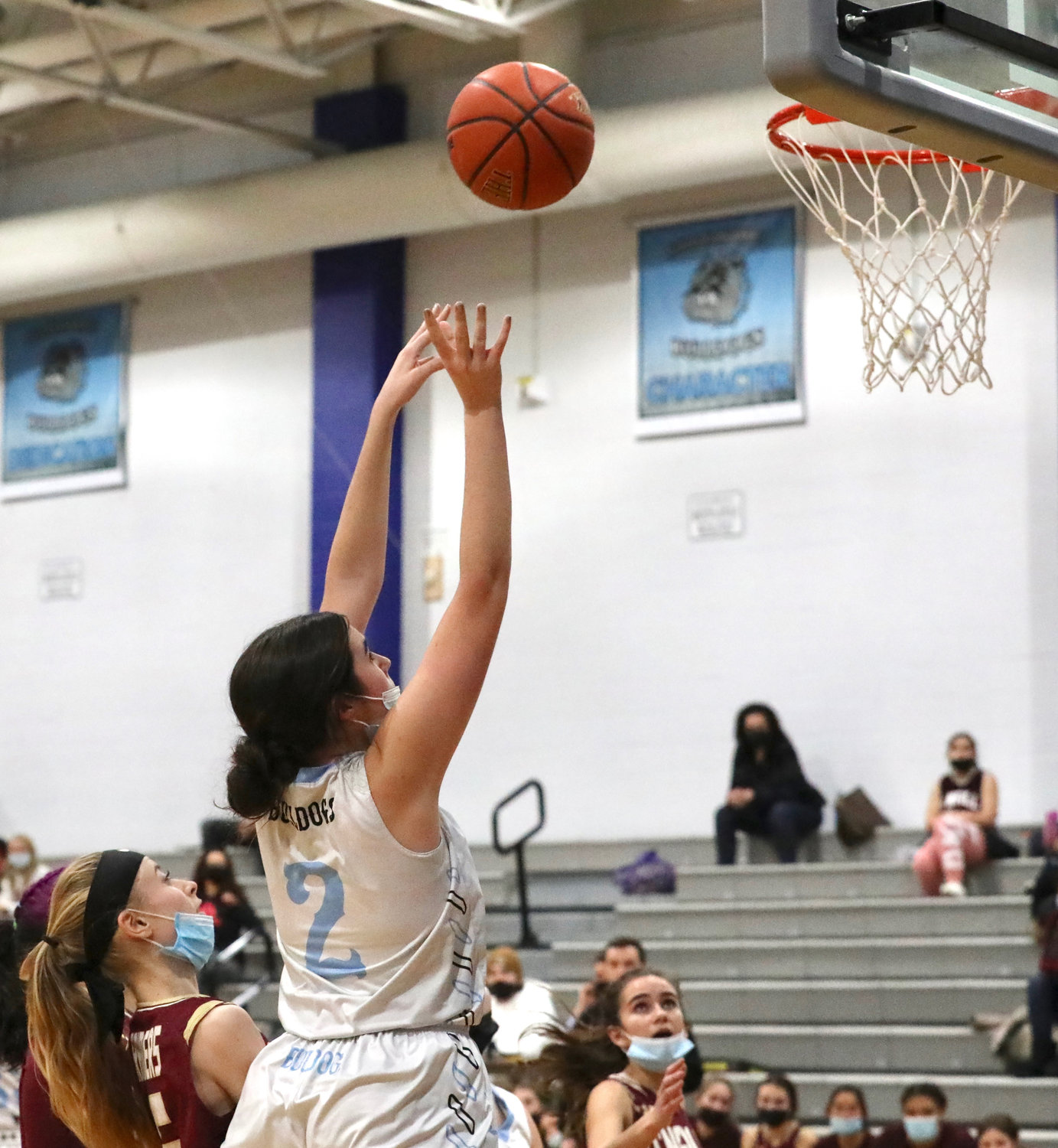 Sullivan West senior Taylor Wall goes up to score two of her 12 points. Wall is a great presence in the paint. Sullivan West out-rebounded O’Neill in a game they could have won with better management in the fourth quarter.
Richard A. Ross | Democrat
Previous Next
Posted Friday, January 7, 2022 6:20 am
Richard A. Ross

LAKE HUNTINGTON - Every basketball game has a life of its own, unique in its own right and impossible to predict with certainty. For the 6-1 James I. O’Neill Lady Raiders, a team that vanquished both Class AA Middletown and Class A Minisink Valley in a recent holiday tournament, one would have foreseen them having relatively little trouble with Class C, 4-1 Sullivan West. But that’s why the games are played.

O’Neill brings a special brand of pressure basketball to bear on its opponents. As Coach Robert McIvor noted after the 49-42 come-from-behind win, it’s his team’s most powerful asset. But assets don’t always guarantee victories.

What makes for effective coaching is preparation. To wit, Sullivan West’s Pat Donovan had his team practicing often and intensely over the break, preparing for the kind of pressure O’Neill would bring to the fold, and it worked. Not only did Sullivan West break through the Lady Raiders’ pressure early with scoring from the aggressive inside presence of Riley Ernst and Taylor Wall, they did what no other team this season has done against O’Neill: they held them scoreless for the entire first quarter. O’Neill’s sporadic practice over the break revealed a team that looked rusty and off its mark, especially in the early going.

Instead of yielding to pressure, Sullivan West turned the tables and amped up its own defensive hustle. The Lady Dawgs forced O’Neill into poor shots and the commission of turnovers. Indeed, O’Neill was on the ropes early with players out of position, hurried shots and lax defense in the interior. The Lady Westies led 7-0 at the end of the first stanza.

O’Neill broke the drought early in the second quarter and outscored SW 15-11. Still, Sullivan West held an 18-15 lead at the break and maintained a 33-32 lead going into the fourth quarter.

What turned this game into an O’Neill win was not its relentless pressure. It was Sullivan West’s late mismanagement of the basketball. Turnovers are a part of the game, and yes, they can often be a function of the other team’s defense. Coming up on the wrong end of a 17-9 fourth quarter, it came down to mistakes that Coach Donovan felt that a very winnable game and a chance for a headline-grabbing upset was lost by his own team.

Give O’Neill credit, especially Anryah Lewis who posted 26 points including 11 of them in the crucial final frame. Audrey Elisondro added 9, four of which came in crunch time. Sullivan West’s assets are more than commendable and getting stronger by the game. With the big play of Ernst, Wall and Felicity Bauernfeind, coupled with great ball movement around the perimeter from Grace Body and Brielle Arnott, the team is rounding into form and looking more and more like a sectional contender.

Ernst led her team with 14, Wall had 12 and Boyd added eight. O’Neill improved to 7-1. Their division doesn’t look to be much of a problem for them with Burke down and Chester having dropped to Class C. This Saturday they will play the Hambletonians in a match up worth noting. Sullivan West fell to 4-2, their only other loss, a league fray against Chester.

Donovan summed things up this way, “Practicing over break did help, and we were prepared for them. We knew they were going to press us and we prepared for it. We handled their press pretty well for the most part, we just beat ourselves.

“We had way too many turnovers. It was a very winnable game for us. We were up going into the fourth, but just gave the ball away to them too many times. We can't give good teams opportunities to score easy baskets. We need to make them earn each basket. We do a great job defensively. We were disciplined defensively. We just gave them easy opportunities to score. It's tough to win when we commit 34 turnovers. They are a good team, and hats off to them. They battled back from being down the entire game.”