No one seems certain of the origin of the term hoggee, the canal worker, typically a child, who was responsible for taking care of and leading the horses or mules used to tow the boats on the … 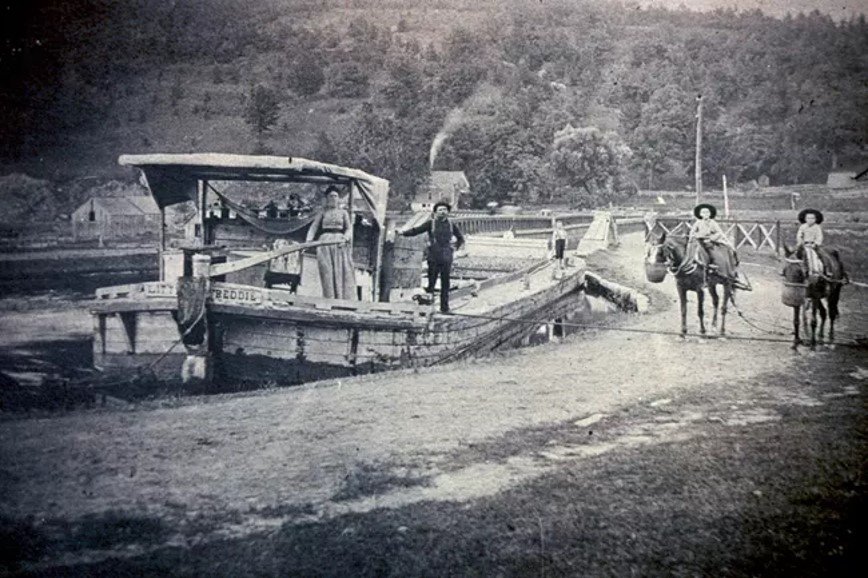 A canal boat and its crew, including young hoggees, about to enter Roebling’s Delaware Aqueduct on the D&H Canal.
Contributed photo
Posted Friday, March 25, 2022 7:00 am
John Conway

No one seems certain of the origin of the term hoggee, the canal worker, typically a child, who was responsible for taking care of and leading the horses or mules used to tow the boats on the waterway. Most historians say the word comes from the commands “haw” and “gee” used to get a horse or mule to stop or go, but there are some who insist the word is a bastardization of hogler, the old English term for a low-level laborer, while others prefer some different etymology. Whatever the origin of the term, it became popular during the early days of the Erie Canal and entered the popular lexicon through its usage in ditties of the day, supposedly sung by the boys and girls to help pass the time as they walked mile after mile hour after hour: “Hoggee on the towpath/Don’t know what to say/Walk behind a mule’s behind/All the live-long day.”

And the work of these children was indispensable on not just the Erie Canal, but virtually all of the canals of that era.

The D&H Canal opened in 1828—three years after the Erie was completed-- and its impact on Sullivan County—which just happened to be along the route-- is inestimable, as entire communities were formed here as a result, and for the first time goods could be easily transported into and out of the county. The population of Sullivan County more than doubled in the first 20 years of the canal’s operation, from about 12,000 in the 1830 census to more than 25,000 by 1850.

The D&H Canal also played a huge role in fueling the industrial revolution in America by transporting coal, bluestone, and other goods to New York City, while employing thousands, including women and children.

The story of the canal is told well by a number of organizations, including the National Park Service, and the D&H Canal Museum in High Falls, which continues to raise the bar for both research and narrative.

But the story of the role that children as young as seven or eight years old played in the D&H operation is one that is only recently drawing attention. The non-profit history education group, The Delaware Company, and in particular its Executive Director, Debra Conway, has been leading the way in telling that part of the canal’s story, and has recently taken a big step toward memorializing it.

Partly inspired by a romanticized painting by E.L. Henry, The Kate Project is the group’s three-phase undertaking that includes construction of a half-mile extension of towpath along the Delaware River just south of Roebling’s Delaware Aqueduct, the creation of seating areas to include stone benches and interpretive signs, a canal snubbing post, and a bronze sculpture of a hoggee and mule.

“The project is intended to tell the canal’s lesser-known stories, such as the bluestone industry in the river valley that utilized the canal for a time and later developed connections to Boss Tweed and Tammany Hall,” Debra Conway explains. “And we want to especially highlight the role of the children, some of them orphans adopted out of the overcrowded foundling homes in New York City and put to work tending the mule teams that pulled the boats. These boys and girls woke up early to feed and outfit the teams, walked 18-20 miles a day alongside them, and then prepared them for ‘bed’ at the end of the day. It has been said that the mule teams were often treated better by the boat owners than the hoggees, because they were more expensive to replace.”

Phase one of the project—the selective clearing of a viewshed along the Delaware River and the route of the hiking path—was completed in 2020, and phase two, which will entail all of the remaining work except for the sculpture, is now underway and is expected to be completed this year.

The stories of the D&H Canal, the hoggees, and the Kate Project will be the subject of a ZOOM presentation by this columnist, your Sullivan County Historian, for the Ethelbert B. Crawford Public Library in Monticello at 6 p.m. on Thursday, March 31. The program is free, but registration is required, and can be accomplished at https://ebcpl.libcal.com/event/8921491.

John Conway is the Sullivan County Historian and a founder and the president of The Delaware Company. He will present the program “The Kate Project” for the E.B. Crawford Public Library on Thursday evening, March 31.