In praise of coaches: Tributes to life-changing mentors

In praise of coaches: Tributes to life-changing mentors 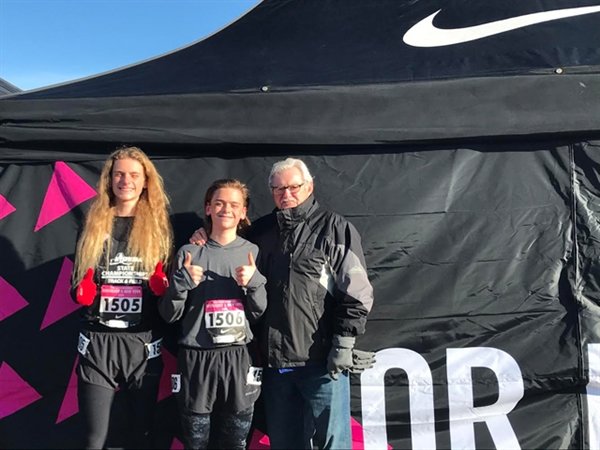 Charlie Delmonico with his grandsons Bryce and Reece Maopolski at the Nike Cross-Country Regionals at Bowdoin Park in Wappingers Falls a year ago.
CONTRIBUTED PHOTO 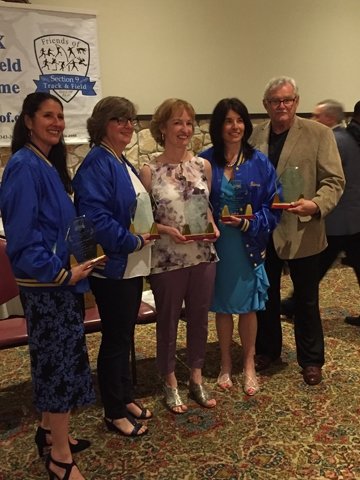 Charlie Delmonico was inducted in the Section IX Track and Field Hall of Fame in 2019.
CONTRIBUTED PHOTO 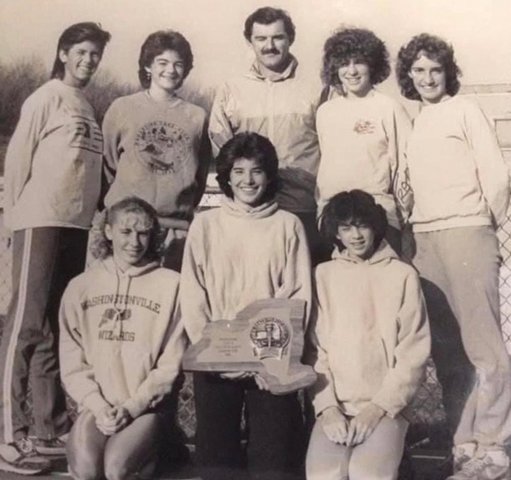 The 1985 Washingtonville Cross-Country Class A State Championship team coached by Charlie Delmonico. His daughter Dee is to his left.
CONTRIBUTED PHOTO 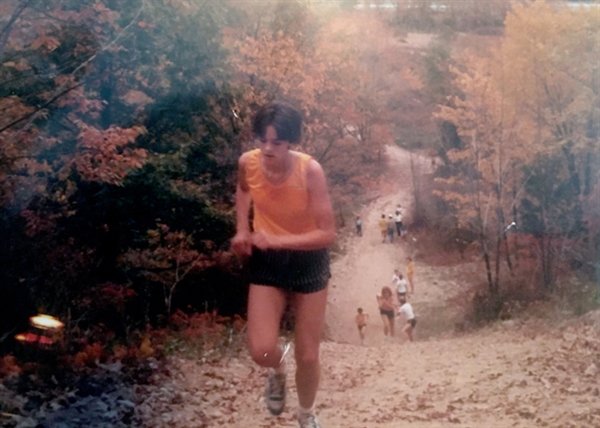 WALDEN — Drop a stone into a calm body of water and watch the concentric waves ripple outward into wider and wider circles. Such has been the impact of the dynamic coaching life of Charlie Delmonico, whose 35-year iconic career at Washingtonville gave rise to four state Cross-Country championship teams as well as a plethora of other honors and accolades.

Lives impact other lives and Delmonico's resonant effect on his former proteges lives on years after his retirement, emblazoned anew in the children and grandchildren of athletes he once mentored.

“I loved doing what I did,” notes Delmonico, whose coaching exploits spanned three sports during his tenure.

As the late John Wooden, iconic men's basketball coach of UCLA, was nicknamed the Wizard of Westwood, Charlie Delmonico could well deserve the appellation of the Wizard of the (Washingtonville) Wizards.

To annotate his lifetime of achievements would warrant a book, not merely an article.

But a look at Delmonico's ripple effect on his family affords a stunning microcosm of his far-ranging impact.

His daughter Dee is currently a Cross-Country and track coach at Sullivan West. In her high school days at Washingtonville, a school she transferred to from her native Valley Central at the behest of her dad, she was part of the 1985 state Class A Cross-Country Championship team as well as a member of the school swimming team.

She was a Section 9 indoor 3000-meter champion, all in all, a standout runner in her high school days.

Bryce is currently enrolled at Oneonta but studying remotely due to the COVID-19 pandemic. A Section 9 Class C/D 3200 and Steeplechase champion and the winner of NYS Most Positive Athlete Award for Boys X-C, Bryce was an OCIAA Scholar Athlete for SW, an honor previously won by his mom in her Washingtonville days and his cousin Camryn at Monticello.

He and Reece, who is currently a senior at SW, train together.

Dee's younger sister, Kelly, was a swimmer for Washingtonville. She currently teaches at Monticello. Her daughters Camryn and Sydney were outstanding distance runners for the Panthers and went on to noteworthy careers at Siena.

Dee's brother, Kevin, was a star soccer and hockey player at Valley Central. His daughter Mackenzie is a rising soccer star there.

Traveling hither and yon, Charlie and his wife Sandy were often to be found before the COVID hiatus at the games and races of their grandchildren. The husband-and-wife duo have consistently provided the most affirming and supportive milieu for their children and grandchildren.

“There's nothing greater than watching the start of a race or seeing kids compete,” avers Delmonico, whose sage advice transmitted to so many over the years has resonated strongly with his children and grandkids.

Some of his maxims include: “You only get out of it what you put into it. Summer is the key to Cross-Country training. The stopwatch doesn't lie. Enjoy what you're doing to be successful and find out what other runners are doing, it probably is ten times greater than what you've been doing.”

Charlie Delmonico was an excellent athlete in his own right at Valley Central, the school he graduated from in 1965. He was an all-county soccer player, a standout guard in basketball and a star pitcher who was recruited by the Chicago White Sox.

He turned down their offer and went instead to Salem College in West Virginia where he played basketball for four years, an integral part of the first team in school history to win 20 games.

Getting a job at Washingtonville as a Physical Education teacher, Delmonico began coaching basketball which he continued for 11 years, a stint that included a Class A title. In 1969, when Cross-Country coach Art Jessup moved over to coach soccer, Delmonico took over the reins of the Cross-Country team which at the time was made up of only boys.

“Back then, people didn't think girls could handle running the distance,” he quips. In those days Diana Halpin was running for Monroe-Woodbury in the mid 1970s but there were no state championships for girls at the time. She went on to become an All-America at the University of Houston.

Soon Tri-Valley and Port Jervis added girls as did Delmonico at Washingtonville.

“Starting the girls team I regard as one of my greatest accomplishments,” recalls Delmonico.

When the combined team became too large, Jessup returned to coach the boys and Delmonico stayed with the girls. His cross-country career spanned 35 years. After his basketball coaching days ended, he coached indoor track and added outdoor track for 25 years as well.

In just his second year of coaching Cross-Country Delmonico mentored a state champion in Chuck Forys.

In 1992 the girls defeated #3 Nationally-ranked Saratoga

in one of the biggest upsets in state meet history to garner the Class A title.

Delmonico was named the top girls coach in NYS. Other accolades included many wins in indoor track with numerous state qualifiers and repeated trips to Nationals. In outdoor, Delmonico's teams accrued many county and sectional team championships and he coached many individual state champions. His team won the Eastern States Championship in Cross-Country at Van Cortlandt Park.

After retiring and taking a job as Driver's Ed teacher at Monroe-Woodbury, Delmonico returned as a coaching assistant at Monticello, where he got to oversee the running careers of his twin granddaughters Camryn and Sydney Johnson.

“I remember competing in track as early as five years of age while my parents ran the Town of Montgomery Summer Track Program in Valley Central. I grew up running 5K and 10K's with my dad and usually winning my age group,” says Dee Maopolski, tracing her early running roots. “I would travel with my dad with his team to invitationals on weekends when I was in elementary school and dreamed of competing in these big meets one day.

“I competed in the Junior Olympics every year and went to Nationals in California one year where I just missed out on a medal,” she continued. “The following year I won a medal in Philadelphia at age 12. I ran modified XC and track at Valley Central and then moved up to varsity as an eighth grader. Going into ninth grade I decided I wanted to go to Washingtonville to run on my dad's team.”

Charlie paid the tuition and Dee made the varsity team as a freshman. “She was the best freshman I ever coached,” notes her dad, objectively speaking.

Dee remembers, “as a freshman we came in 2nd in states. Then as a sophomore in 1985 we won the Class A X-C State title. I was also Section IX Class B indoor champion in the 3000 and ran states at the Carrier Dome in Syracuse. I was part of several County and Sectional Championships in track. In my junior and senior year I swam for Washingtonville and was captain of the team. I went on to SUNY Binghamton but only ran for one season there,” she recalls.

When Dee met her future husband, Paul, she took up running again and recruited him. “He loved it. Before the kids came along we would do local races and triathlons together. When the kids were little we trained for our first marathon and finished it together (Steamtown 2006) I would drop Bryce off at Pre-K in Beach Lake, PA and strap Reece in the running stroller and run all over Beach Lake to train.

“I've run two marathons and one ultra while Paul has run several marathons and two ultras including the JFK 50-miler,” she added. “The kids would always see us training and would often run parts of our long runs with us. We would travel in the summer and hike and then when the boys were old enough we would run trail runs.

“We'd run local 5K's but, as they got older, they joined soccer and basketball until high school,” she said. They would still run with us, especially in the summer when we'd travel cross country and run together. They both transitioned to cross-country after playing modified soccer for two years and then continued on in track.”

Dee aspired to be a coach and teacher like her dad. She started out as an assistant swim coach at Washingtonville. Then came a sixth-grade teaching position at Liberty in 1998. Her dad encouraged her to start a running club with her students as a feeder program to the modified and varsity teams. She had a huge turnout of fifth and sixth graders and would have X-C races with Jeff-Youngsville Central School at which Paul would help her out.

“My dad would bring his team to Liberty in the summer to practice together and help me build a course. We both had runners make it to states that year. I had two boys and his girls team competed in Buffalo.

“Once I had kids of my own I took some time off from running to be home with them and didn't go back to coaching until they needed someone for the girls team in 2018,” she continued. “I was thrilled to be coaching again, especially since Bryce had decided to run. …Last year both Bryce and Reece were on the team… and I became an assistant coach for both indoor and outdoor track.

See next Friday's issue of the Sullivan County Democrat for Part II which annotates the careers of Charlie Delmonico's grandchildren Camryn and Sidney Johnson and Bryce and Reece Maopolski.

Four standout Lady Yellowjackets commit to play in college
ELDRED –– As the conclusion to the 2021-22 school year draws near, so too does the end of an era for seniors who will be leaving high school and undertaking new ventures. The Eldred …

Local teams complete busy schedules as postseason approaches
SULLIVAN COUNTY –– The end of the regular season is always quite frantic, as teams try to make up games canceled throughout the season, whether it be related to weather, the pandemic or …

Swan Lake Golf and Country Club
How many of our local golfers remember when the golf course at Swan Lake was built?Information on the web pages say that the Swan Lake Golf Course opened in 1950, while other information indicates it …

Two birds, one season
Bart Rasnick of South Fallsburg bagged his second turkey on Thursday, May 12. The 22.7 pound bird had one inch spurs and a 9.5 inch beard.