CICERO - On the greatest of stages, against the very best of the best, to win a medal at the NYSPHSAA/Federation track meet is a remarkable achievement, one that not only requires summoning … 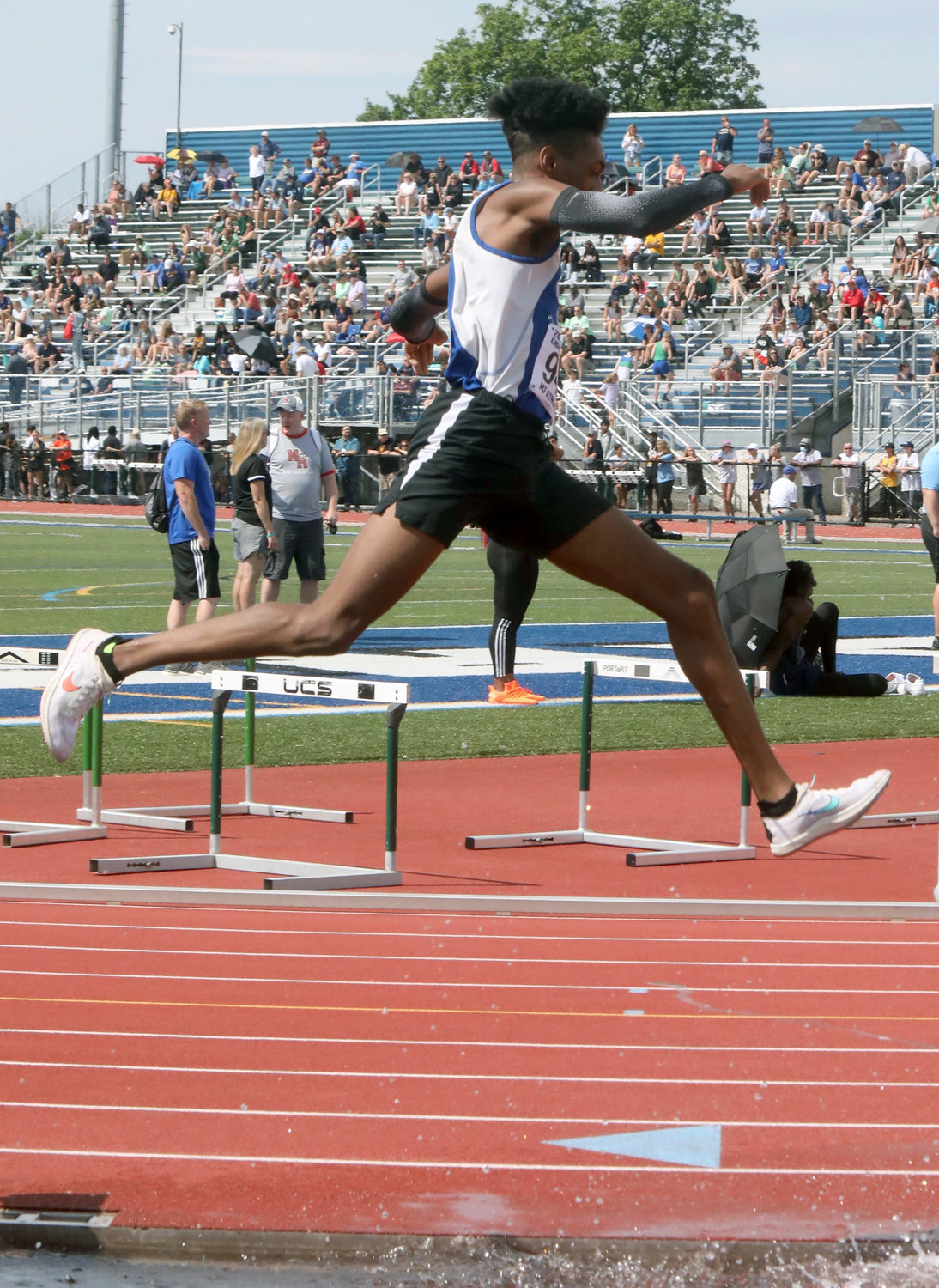 Monticello’s Evan Waterton was nothing short of spectacular. He shattered the school and county records in the 3000 steeplechase with his time of 9:13.79 with his second place D1 finish which was fourth overall. In the 1600 he set a PR and school record of 4:17.18 but did not medal. On Friday he made history with his 3200 finish in 9:12.42, which got him his first medal of the weekend. That was also a school record and his personal best. He finished fifth among D1 racers and sixth overall in the event.
Richard A. Ross | Democrat 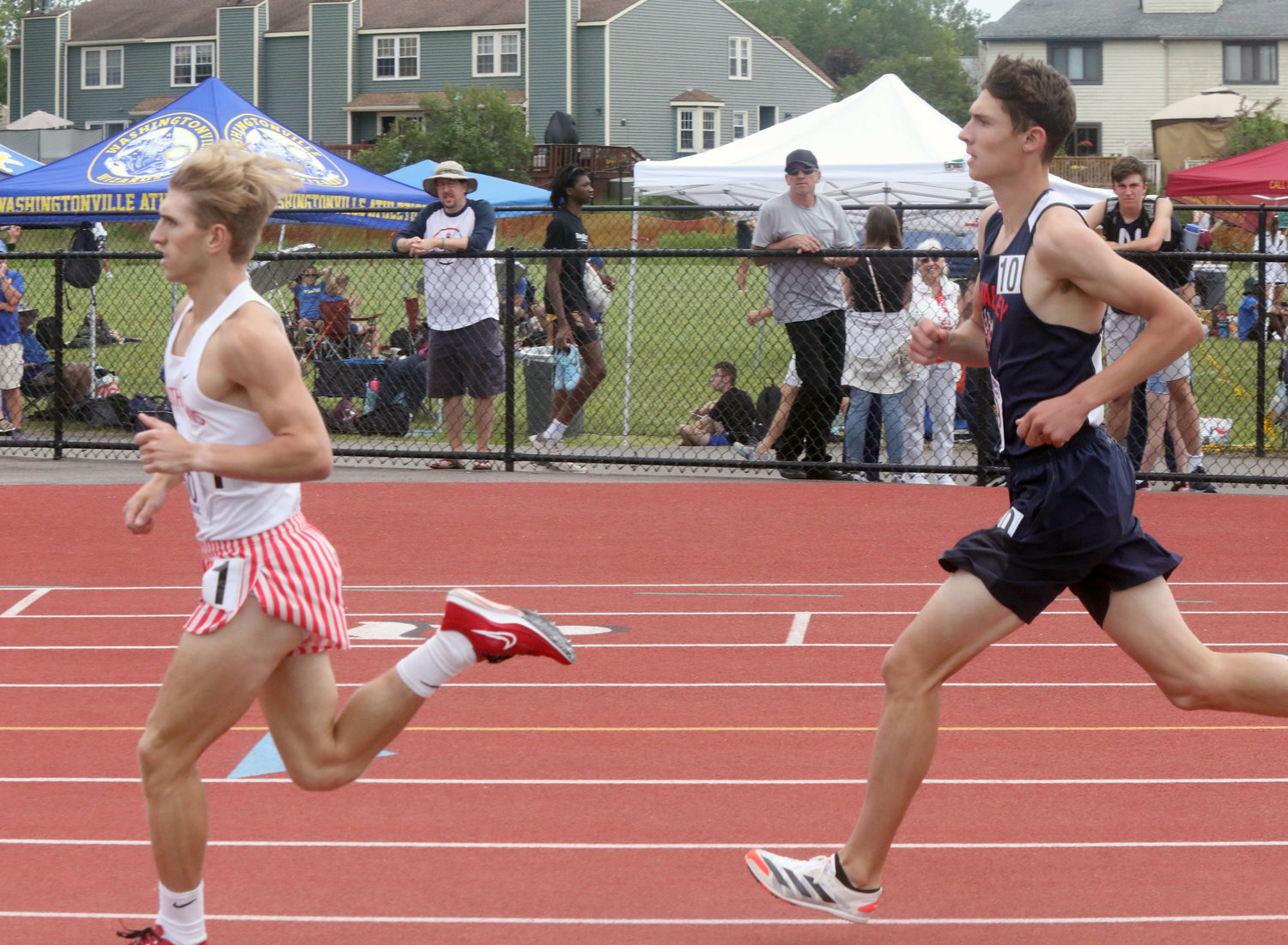 Tri-Valley junior Adam Furman won two medals at states. He finished second among the D2 contenders in the 3200 and sixth among the D2 racers in the 1600.
Richard A. Ross | Democrat 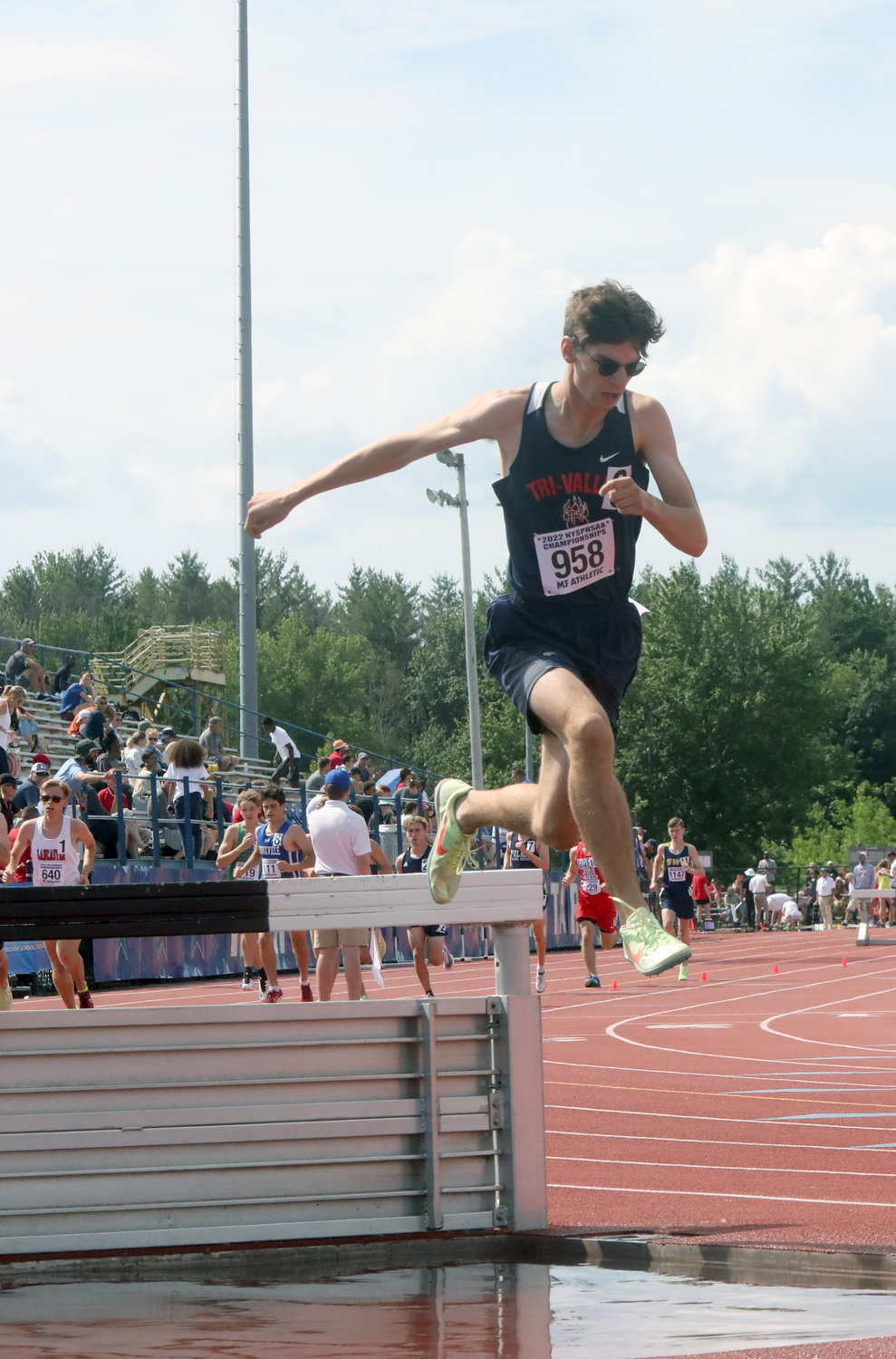 Tri-Valley’s Caleb Edwards took sixth among the D2 contenders in the 3000 steeplechase. He also ran a leg in the T-V’s tenth place D2 finish in the 4x800 relay along with Adam Furman, Van Furman and Craig Costa.
Richard A. Ross | Democrat 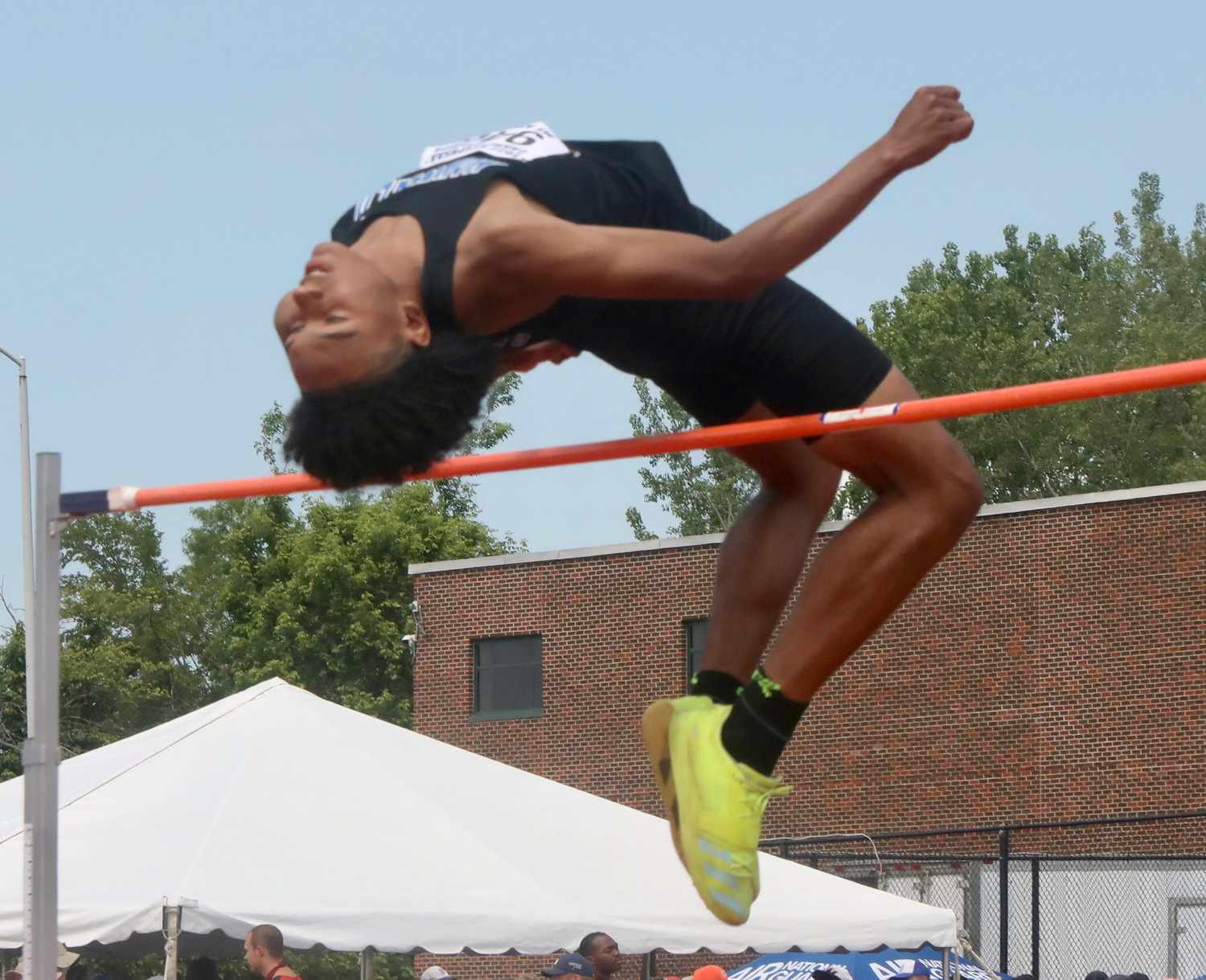 Poetry in motion: Monticello’s Jadden Bryant clears 6-4 for the very first time in his career and takes third place in the D1 and fourth in the Federation. His jump is one inch shy of the Monticello record of 6-5 held by Jerome Luckey.
Richard A. Ross | Democrat 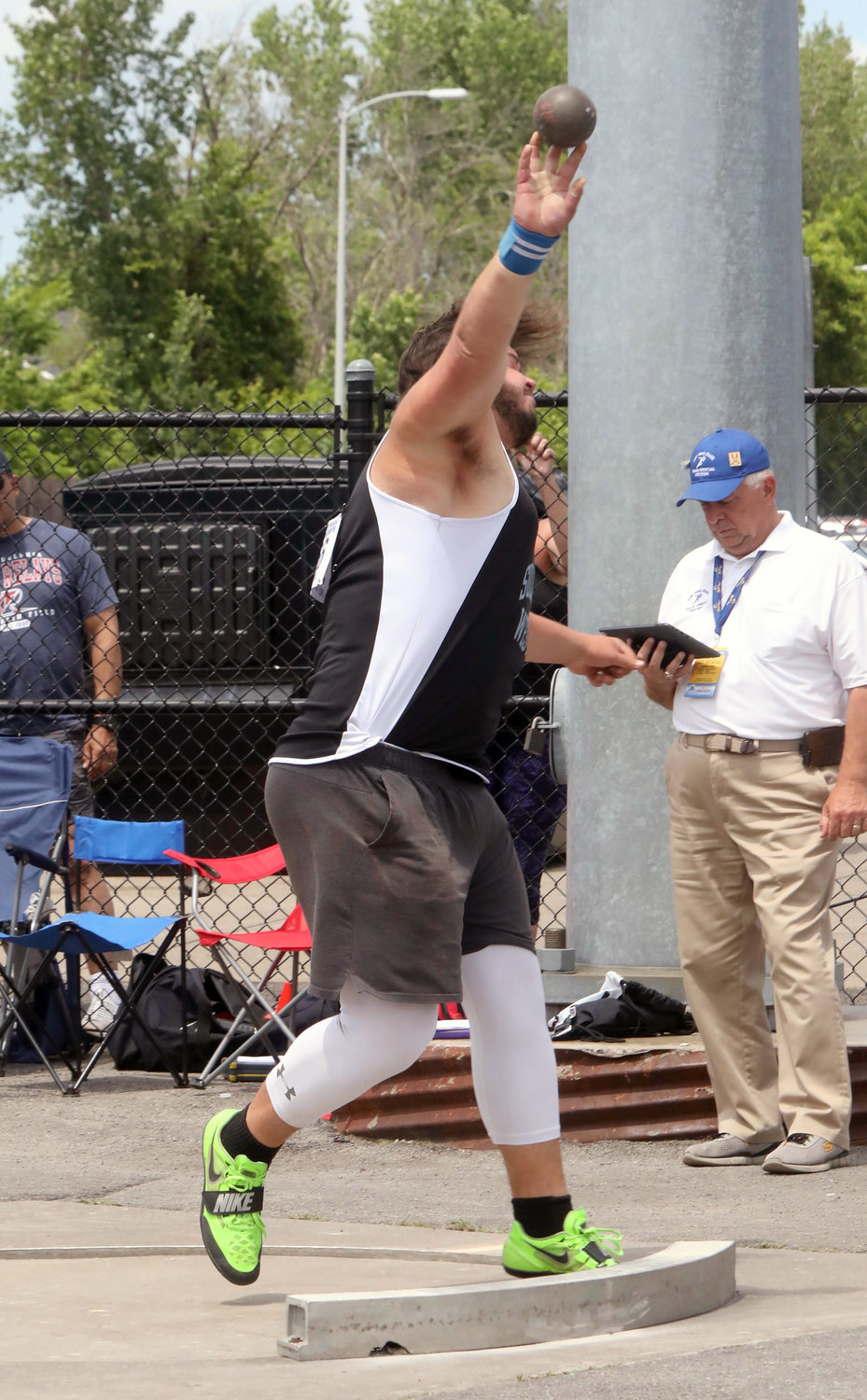 Sullivan West’s Chris Campanelli releases the shot put on his way to a third place finish in the Federation Championships garnering his second medal of the meet. The throw of 53-4.75 was his best ever and rebroke the school record he had set the day before with his Division 2 fourth place heave of 53-06.75. Campanelli was also the Section Nine Sportsmanship Award winner at states.
Richard A. Ross | Democrat 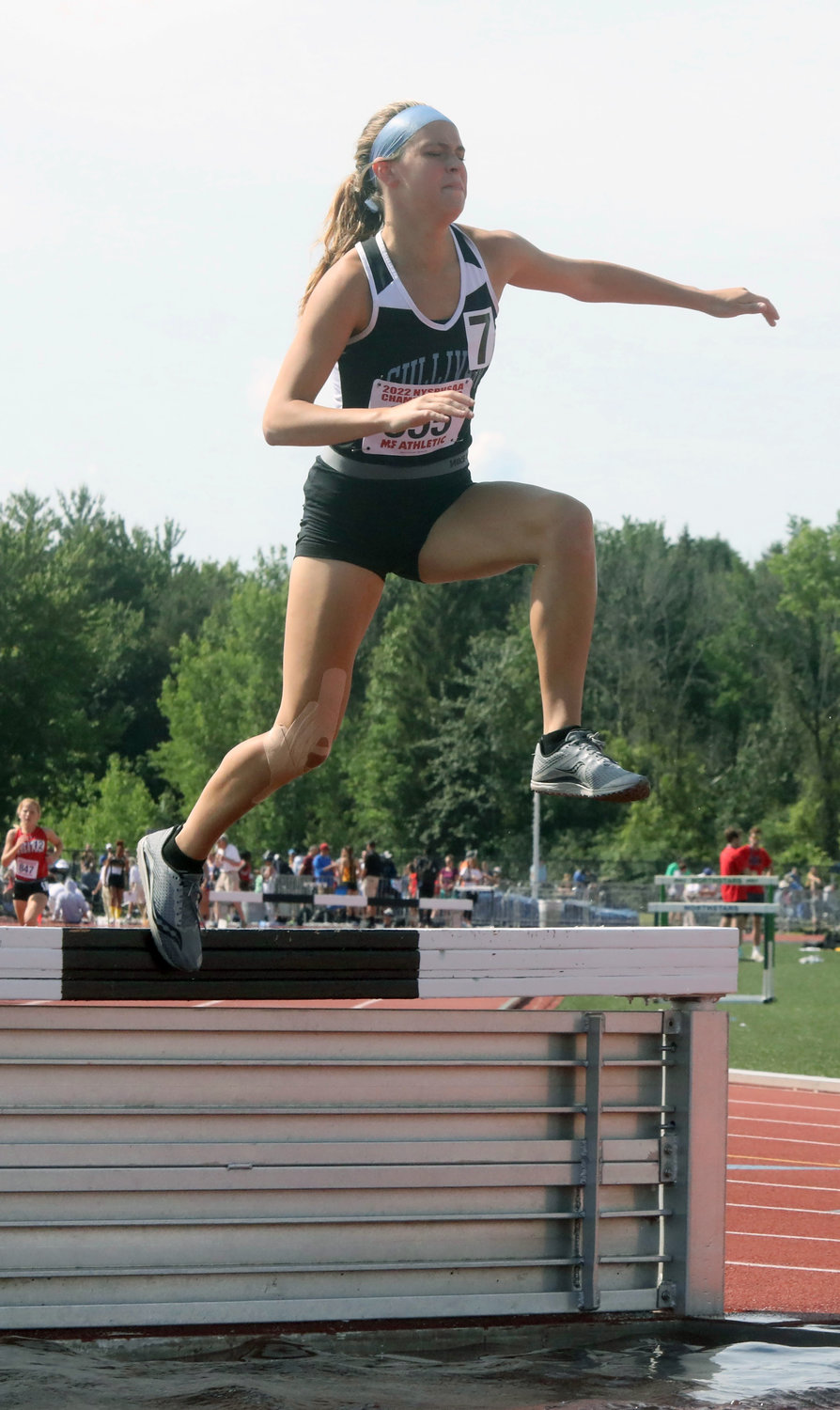 Sullivan West’s Grace Boyd broke three school records this spring including in the steeplechase, along with the 3000 and 1500. Though she didn’t medal at states, suffering knee pain she persevered right on through and set a new PR in the steeplechase and new school record with her time of 7:45.18. She finished 9th among D2 contenders. She also competed in the 3000 the day before on the meet’s opening afternoon.
Richard A. Ross | Democrat
Previous Next
Posted Tuesday, June 14, 2022 6:20 am
Richard A. Ross

CICERO - On the greatest of stages, against the very best of the best, to win a medal at the NYSPHSAA/Federation track meet is a remarkable achievement, one that not only requires summoning one’s best in a performance, but the grit, determination and fortitude to train, practice, compete and finally ascend to the pinnacle of one’s section just to have the opportunity to attain that milestone. Thus, the pairing of the homonyms, mettle (the ability to meet a challenge or persevere under demanding circumstances; determination or resolve), and medal.

Of all the high school sporting events of the school year, nothing compares to the New York State/Federation Track and Field Championships. In terms of the sheer numbers of athletes representing the 11 NYSPHSAA public school sections as well as those from the Public School Athletic League of NYC (PSAL), the Catholic High Schools Athletic Association (CHSAA) and the Association of Independent Schools (AIS), the aggregate collection of runners, jumpers and throwers forms a mélange of the very best track and field athletes from across NYS and indeed, some of the very best in the nation. The NYSPHSAA schools are classified as either Division I or II depending on their enrollments. Those that have an enrollment of 1000 or higher are D1 while those below 1000 are D2. Medals are awarded to the top six finishers in divisional events and the top eight in the Federation championship events that also include the top contenders from the aforementioned other realms besides the NYSPHAA schools. The top four finishers in the division events advance to the Federation Championships.

All told, there were seven county athletes from D2 schools (SW, T-V and Fallsburg), while three were from D1 Monticello. From those ten standouts over the two-day meet, six accounted for the 10 medals garnered, which included a bevy of personal bests and records. On Friday, Monticello’s Evan Waterton recorded a personal best time in the 3200 (9:12.42), finishing fifth in Division I and sixth overall. He established a new school record in doing so. T-V’s Adam Furman was second among Division II contenders and 14th overall with his time of 9:24.92. Furman and Waterton both got medals on Friday. So did Monticello’s Taina DeJesus in the 400 intermediate hurdles with a time of 1:06.66. She missed out on Saturday’s Federation Championship race by .17 hundredths of a second. Had she been fourth, she would have advanced.

SW’s Grace Boyd, fighting off nagging knee pain in the 3000, finished 15th among the D2 contenders and 27th overall with a time of 11:05.98. Fallsburg’s Gisella King put in a noble effort in the 400 and finished tenth among Division II contenders with a time of 1:01.66. Finally, SW’s Chris Campanelli overcame a fouling problem in the shot put and on his last throw, broke the school record with a heave of 52-04.75 and a fourth-place finish for a medal. He got to advance to the shot put championships the next day. Monticello’s Jadden Bryant missed the cut in the triple jump as he finished 11th with a leap of 43-05.75. It was his second-best jump of the season.

Saturday evinced great performances. Early in the morning SW’s Grace Boyd broke her previous PR and school record in the 2000 steeplechase. She finished ninth with a time of 7:45.18. Tri-Valley’s Caleb Edwards won a medal for his sixth place D2 finish in the 3000 steeplechase. He was 16th overall with a time of 10:05.39. In the next heat, Waterton finished second among D1 contenders and fourth overall for his next medal collection. His stunning PR time of 9:13.79 shattered the school record set by David Wilbur in 2010 by twenty seconds. He also broke SW’s Colin Seidl’s county record of 9:33.62 set in 2008 that netted Seidl a D2 gold medal at states. Waterton had qualified for the 800 but chose to concentrate on the other two races. His fastest recorded time this season showed he potentially could have won the event at states.

Over in the high jump pit, Bryant was concentrating on clearing his best height ever. And he did so, jumping 6-4 to medal by finishing third in D1 and fourth overall. Bryant is far and away Monticello’s best jumper in the annals of records available. That includes his expertise in the triple, long and high jump. His jump was one inch shy of the 6-5 mark set by Jerome Luckey. In the 1600 Waterton clocked a PR of 4:17.18. The race came just 35 minutes after the steeplechase. The time constituted a new school record. He finished out of medal contention though with ninth place finish among D1 runners and 12th overall. Furman posted a 4:22.07, which got him a medal for sixth place in D2. He was 14th overall.

Saturday afternoon saw Chris Campanelli make history with his best shot put throw ever at 53-4.75. That heave won him third in the Federation Championship and netted his second medal of the two-day meet. Campanelli credits coach Steve Rogers with mentoring him and teaching him the fine points of throwing. Under Rogers’ watch, Campanelli advanced from 39 feet in the shot put to this state performance high water mark. He now holds the school record, finally breaking the longstanding mark set by Alan Ackerman. Campanellli also received the Sportsmanship Award at the state meet as an extra added honor.

The final county performance of the meet came from the Tri-Valley 4x800 team that finished tenth among Division 2 contenders with a time of 8:39.76. The glorious state meet will be held at Middletown High School next June and will return to Cicero North High School in 2024.