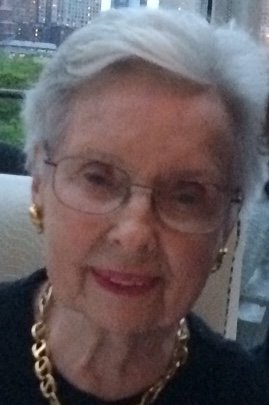 Jeanne Marie Quigan Scott, of Bethel, passed away at her beloved country home on Friday, May 22, 2020 at age 95. Born in New York City on December 28th 1924, she was the daughter of Marie J. Quigan and Frank J. Quigan, chairman of Fedders Inc. Jeanne grew up in New York City and went on to graduate from Cornell University in 1946. Jeanne enjoyed spending her summers at the family country home, which she fondly called “The Farm” in Fraser Settlement, Bethel, New York, where her ancestors had settled in 1808 and where she and her husband spent much time after retirement.

Jeanne was married to Walter (Scotty) Scott, architect and artist in New York City, for 44 years until his death in 1992. They met at Cornell while he was in naval officer training during WWII and she was a student. Jeanne told stories about Scotty coming to visit her at home after she graduated, and he had returned from military service in the South Pacific and how she would meet him at the old Penn Station platform in NYC.

Jeanne loved to dance. She was trained in ballet and then went on to excel in modern dance at Cornell where she led undergraduate dance classes. She exceled in ballroom dance too, and even in her nineties she could still “cut a rug”. She remembered “dancing across the Atlantic” on the QE2 and the Queen Mary more than once.

Jeanne and Scotty and their two daughters lived in Westchester County and spent their summers on “The Farm” in Fraser Settlement. Jeanne had many friends and was very involved in both communities. After being a homemaker and raising their two girls, she became a real estate broker in Bronxville, New York. Jeanne was an active member of the Liberty Garden Club, loved gardening and bridge, and volunteered for the Sullivan County Historical Society as their PR representative. She remained involved as an alumna with the Westchester chapter of her college sorority Pi Beta Phi and continued to volunteer in support of their mission for many years. She was very active in the Episcopal Church in both Westchester and Sullivan Counties for most of her life and was a member of the Vestry; she remained, as she would say, a “Morning Prayer Episcopalian”. Jeanne loved and passionately recorded her Fraser and Watson family history. Until she died, she lived an independent, active and very full life, surrounded by her family that she adored and the cats and dogs she loved so much.

A private family service was held on Saturday, May 30th at Fulton-Fraser Cemetery in Ferndale, New York. A memorial service will be planned for a later date when everyone can gather safely. Memorial donations can be made to Sullivan County SPCA, 104 Rock Hill Drive, Rock Hill, NY 12775 and Sullivan County Historical Society, P.O. Box 247, Hurleyville, NY 12747.

Arrangements are under the care of Colonial Ramsay Funeral Home in Monticello, NY. For additional information, please contact the funeral home at 845-794-2700 or www.colonialfamilyfuneralhomes.com.