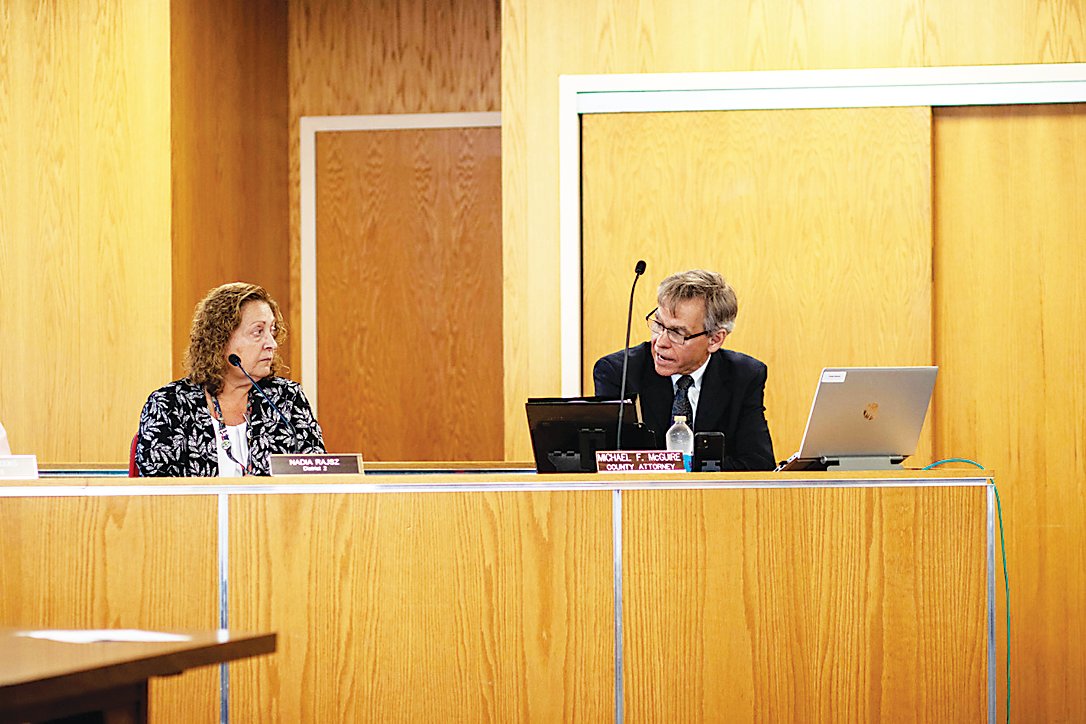 SULLIVAN COUNTY –– Legislators adopted a 2022-2027 Opioid Settlement Spending Plan on Thursday. The Sullivan County Drug Task Force collaborated with members of law enforcement, health and human services, medical provider pillars, and the public in creating the plan, which details how the County will spend some of the monies coming from settlements of lawsuits against various opioid distributors and manufacturers.

“We have educational programs that we're getting ready to kick off next year to work on prevention,” said Health and Human Services Commissioner John Liddle, while summarizing the plan to legislators. “We have harm reduction tools in the budget. We have support for Hope Not Handcuffs … support for law enforcement to reduce the supply of available drugs in our community.

“We have money in there to support our social workers and maintaining their certifications to be able to provide services and incentivize more people that come into the field,” Liddle continued. “So it’s a pretty comprehensive look [and] we tried to divide the money across many different areas.”

Furthermore, the Legislature authorized additional expenditures from the General Fund to combat substance use in the County. This includes funds for illicit substance detection units and associated software ($130,000); Software to facilitate collection of evidence from cellular phones in narcotics investigations ($52,000); Financial assistance to Catholic Charities of Orange, Sullivan, and Ulster for the purpose of expanding services at their existing location in Monticello ($50,000); and emergency access to NARCAN in government buildings ($25,000).

As the Democrat previously reported, NYS Department of Health (DOH) attorneys and County Attorney Michael McGuire are currently in negotiations on a lease that would see 4-5 DOH employees have a presence at the County Public Health offices in Liberty to handle walk-ins.

On Thursday, McGuire said the County has communicated the per square foot usage fee, which comes out to about $6,000 a month for the space the DOH would need, and that the NYS Office of General Services (OGS) is moving forward with their decision making process.

The County has been told by the DOH that services would not be diminished.

District 2 Legislator Nadia Rajsz referenced the DOH’s proposed relocation of the regional office in Monticello to Orange County, where a 10-year, approximately $2.3 million contract (expiring in April 2032) appears to be in place for space at a property on Crystal Run Road in Middletown.

“If our services are not going to change, who the heck is going to Orange County?” asked Rajsz.

“I think that’s a great question,” said McGuire in response. “But I think the question has to be asked in Albany.”

The second round of 2022 Plans and Progress grants were awarded by legislators on Thursday, with eight recipients receiving a total of $44,725.

Those recipients were the Foundation for Mexican Arts and Culture ($10,000 to purchase equipment and for the installation of new windows at Assembly, the museum of contemporary Art in Monticello); Jeffersonville JEMS ($9,000 for construction of a permanent outdoor stage at Backyard Park); Theatrical Arts at Forestburgh ($9,000 for the installation of sound equipment in the former St. Thomas Aquinas Church to create performance and rehearsal space);

Bloomingburg Restoration Foundation ($5,900 for construction of an outdoor plaza/performance space at the Reformed Protestant Dutch Church that is now used as a community center); The Sullivan County Chamber of Commerce ($5,000 for the launch of the Hurleyville Hub’s Third Thursday Food Truck Round Up, with entertainment and public wifi); The Sullivan County Historical Society ($2,600 for redesign and expansion of their website); The Town of Lumberland ($1,900 for the purchase and installation of air purifiers to facilitate public events in Town buildings); and Delaware Valley Opera ($1,325 for equipment for the new DVO theater in the former Nutshell building in Lake Huntington).