SULLIVAN — When the COVID-19 pandemic hit in March, the whole country shut down. People left their offices and worked from home, schools closed their doors, and restaurants had to close their … 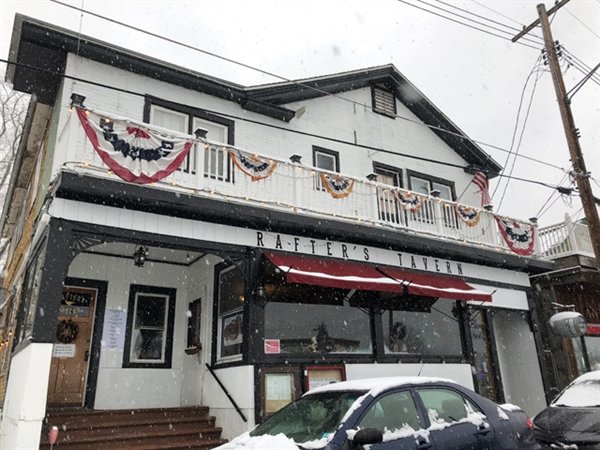 Winter is coming. Restaurants such as Rafter's Tavern in Callicoon offered outdoor seating during the summer months, but now are moving to takeout only after the recent uptick in COVID cases.
IsABEL BRAVERMAN | DEMOCRAT
Posted Thursday, December 10, 2020 12:00 am
Isabel Braverman - Staff Writer

SULLIVAN — When the COVID-19 pandemic hit in March, the whole country shut down. People left their offices and worked from home, schools closed their doors, and restaurants had to close their dining rooms.

While many restaurants offered takeout, it wasn't enough to keep up with their regular output.

“We found out at 12 o'clock in the afternoon that we had to shut down by 8 o'clock that night and switch over to takeout,” said Irene Tsicalos, one of the owners of the Liberty Diner. “It was nowhere near anything to cover the costs of an operation like this one.”

Tsicalos said it was just her and one cook on at a time and everyone else she had to let go, which was around 30 employees including servers, dish washers, prep cooks and others.

Once restaurants were able to open back up to in-person dining in June, Tsicalos said it started off very slow.

Restaurants were allowed to fill to 50 percent capacity, but Tsicalos says they reached that only on a few occasions.

The diner is a mainstay in the community, and has been open since 1990; they celebrated their 30th anniversary this past year.

“I definitely think this is going to change the industry, in what respect I don't know yet, but it will change as a whole,” Tsicalos said.

Around the county many restaurants are still doing takeout only, having decided not to open for in-person dining.

Director of Restaurants Will Baldwin said they decided to pivot to takeout and follow safety protocols while continuing serving the community.

“Even in a pandemic people still wanted some sense of normalcy and some sense of comfort, and being able to rely on their local restaurant provided some measure of that,” Baldwin said. “And also it allowed us to retain staff.”

They re-opened for in-person dining when it was allowed and were able to offer outdoor dining, and over the summer it was busier than normal, Baldwin said.

“We were fortunate that we had deck and patio space where we could follow spacing protocols and still accommodate a fairly large number of people. So for us our traffic actually increased,” he said.

But now with winter approaching, outdoor seating is no longer possible. And with cases rising across the state, people are less likely to travel.

In addition to lower sales, restaurants are dealing with other challenges presented by the pandemic.

Tsicalos said food costs have gone up, sometimes even doubled.

“Depending on the week, something like romaine lettuce goes skyrocketing, and the next week it's eggs,” she said.

Brewster Smith, one of the owners along with his wife Molly Denver and their friend Keith Thomson, of Rafter's Tavern in Callicoon said takeout wasn't enough to pay the bills.

Once they were allowed to open in-person dining, they created an outdoor seating area in the back of the restaurant, like many other businesses did, and at first didn't open indoor dining, keeping safety at the forefront of their minds.

“When you're working with the public in the service industry you have a responsibility, and that responsibility has to be public first, not my pocketbook first,” Smith said. “We felt that pretty strongly.”

With cases rising in Sullivan County in recent weeks, they decided to close in-person dining and move back to takeout only; this was a hard decision to make Smith says.

“We're grateful for the loyal community of customers and it's a tough balance between what you should do and what you can do,” he remarked.

Now with winter here restaurants are staring down not just the pandemic but a period of recession.

“I think it's going to be a difficult road, especially because the winters here are hard to begin with on a normal basis. It's going to be a hard winter more so with the situation that we're in,” Tsicalos said.

Rafter's Tavern had to make another tough decision: they started a GoFundMe fundraiser and plan on closing during January to keep costs down.

But Smith is hopeful that when the spring and summer come, with the vaccine becoming available, people will be happy to go out to eat once again. And he is looking forward to booking musicians to play live shows again.

“Despite having to adjust to the way life is, as everyone has, I am optimistic about everything,” he said. “I do think that come this summer it's going to be a bit of a celebratory explosion.”