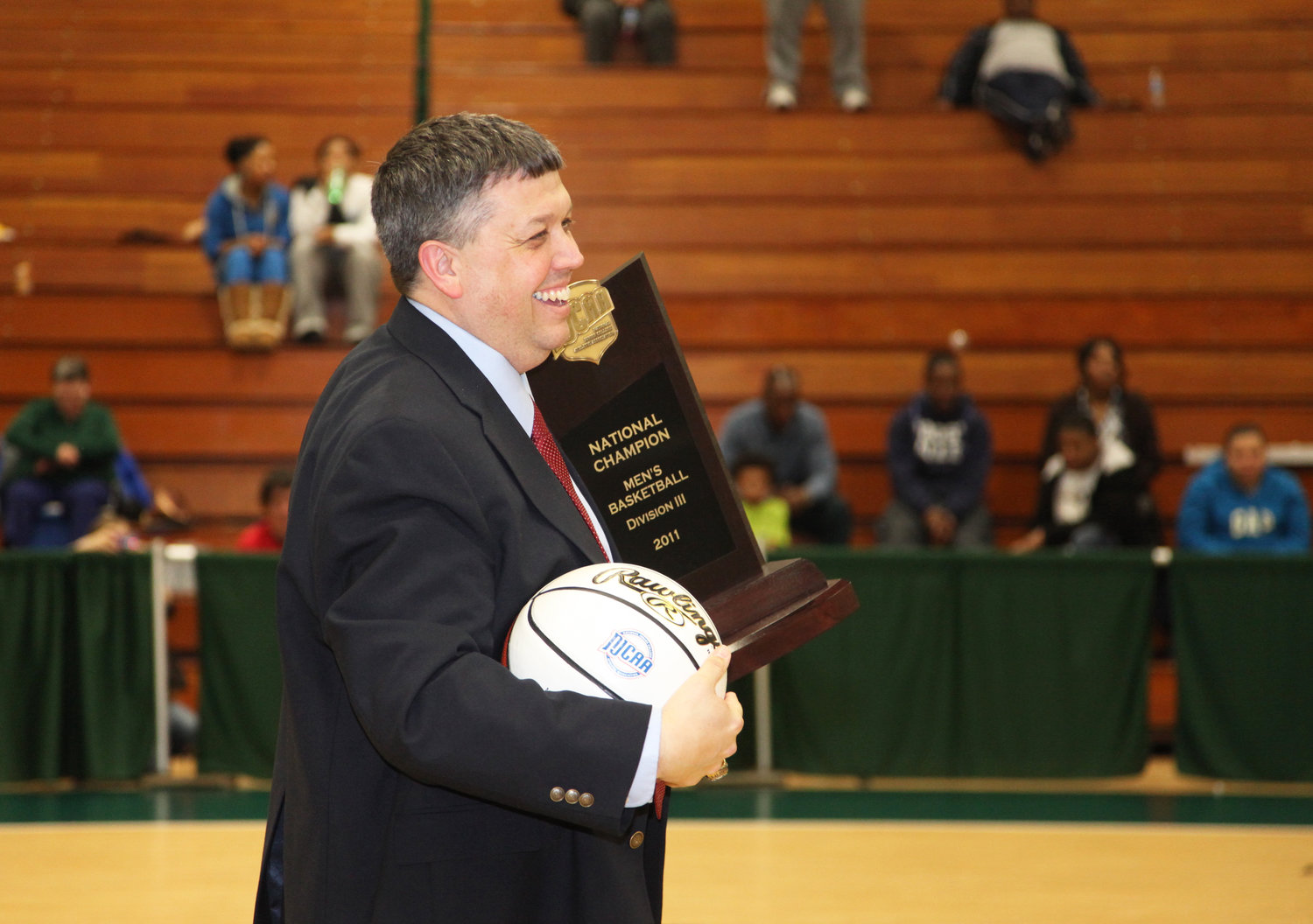 LOCH SHELDRAKE — SUNY Sullivan Director of Athletics & Recreation and Dean of Student Development Services Chris DePew was inducted this week into the NJCAA Men’s Basketball Coaches Association Hall of Fame. Head coach of the Sullivan Men’s team from 2001–2009, DePew led the Generals to seven trips to the NJCAA DIII National Championship Tournament, winning it all in 2007 with an undefeated record of 32-0 and finishing as the NJCAA National Runner-up in 2001 and 2002. He was inducted this week along with student-athletes and current NBA players Jae Crowder, South Georgia Tech/Phoenix Suns, and Jimmy Butler, Tyler Junior College/Miami Heat.

“I am incredibly humbled and honored by this distinction and to be in the same conversation and induction class with two incredible former NJCAA student/athletes and current NBA stars,” said DePew. “A special thank you to the SUNY Sullivan Administration and Board of Trustees over the years, for their unwavering support and letting me move the program in the direction that we wanted it to go to ensure an incredibly positive experience for every student athlete we are able to work with.”

“Athletics excellence has long been a hallmark of SUNY Sullivan, and a great deal of credit goes to Chris DePew,” said SUNY Sullivan President Jay Quaintance. “As a coach and Athletic Director, he has made a very positive impact on our students and the College. We are all very proud of Chris and excited to see his accomplishments recognized by the NJCAA! Congratulations, Chris!”

“I would also like to thank the NJCAA Basketball Coaches Association,” added DePew. “They are such an outstanding group of professionals providing incredible opportunities for our student-athletes. And finally, my former players, my assistant coaches Troy Nowlin and Kyle Walter, and my family, my wife Heather and my son David, for their sacrifice and loving support to allow me to fulfill my dreams. Without any of them, an honor like this is not possible.”

In their announcement of the 2022 honorees, the NJCCA Coaches Association praised DePew as a “difference-maker” and for his longtime service to the NJCCA, student athletes, and fellow administrators through coaching, leadership roles, and community service.

“A proud, former NJCAA student-athlete at Ulster County Community College (NY), where he played both basketball and baseball, he continues to make contributions to the NJCAA basketball community and beyond,” the NJCCA wrote. “DePew’s accomplishments and dedication to bettering the association continues to move initiatives forward.”

(From the NJCAA Coach’s Association):

For 24 years, Chris DePew has served the NJCAA, its student-athletes, and fellow administrators through coaching, leadership roles, and community service. As a coach, DePew possessed a coaching record of 243-36 (.871 winning % from 2000-2009) and averaged 27 wins per year during his head coach career. The Generals had a 9-2 NJCAA Division III Men’s Basketball Championship Tournament record and won seven regular-season tournaments. DePew’s teams finished ranked in the NJCAA Division III Top-10 polls nine times and claimed the national title in 2007 after an undefeated 32-0 season. The Generals were the National Runner-up in 2001 (31-4) and 2002 (32-3) and Coach DePew was named NJCAA District 5 Coach of the Year in 2002 and 2007. The Generals were NJCAA Region 15 Mid-Hudson Conference Champions in 2001, 2002, 2003, 2004, 2005, 2007, and 2008. In 2007, DePew was awarded NJCAA Division III National Coach of the Year, NABC National Coach of the Year, NJCAA “Gary Cole” Coach of the Tournament, BCANY NYS Collegiate Coach of the Year, and was the NJCAA National All-Star Game Coach (Kilgore, TX).

DePew has been a guest speaker for the BCANY Fall Clinic (2004, 2006, 2007, 2009) and serves as a volunteer firefighter in his hometown of Kerhonkson, NY for over 35 years, where he has been honored with Life Membership, the highest honor within the Volunteer Fire Service. He is a Past Chief and Past President of that organization, which he joined at the age of 16. A proud, former NJCAA student/athlete at Ulster County Community College (NY), where he played both basketball and baseball, he continues to make contributions to the NJCAA basketball community and beyond. DePew’s accomplishments and dedication to bettering the association continues to move initiatives forward.