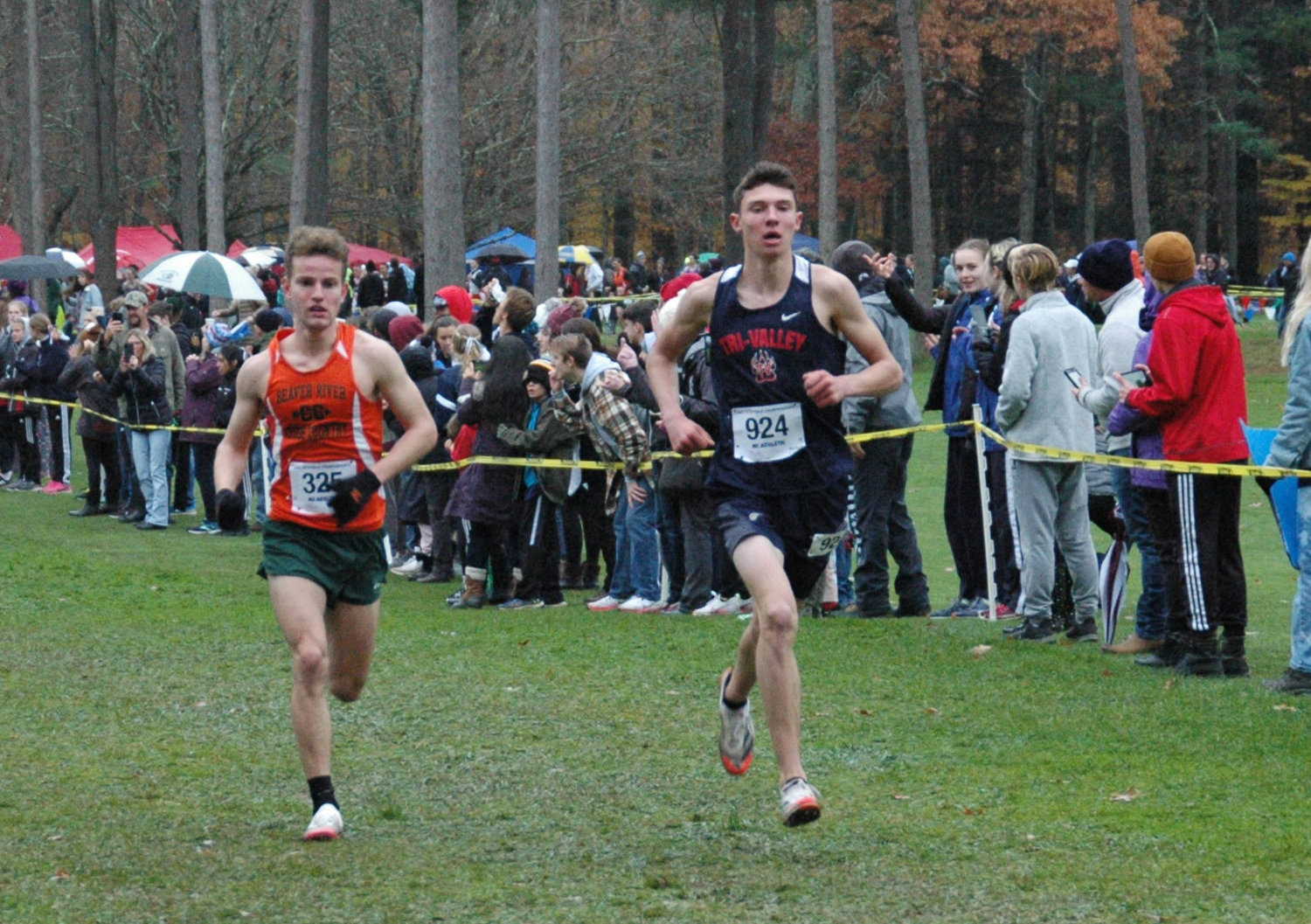 Adam Furman finished second in the Class D boys race. He led until the final 100 meters before being overtaken by Colten Kempney, left, a senior from Beaver River.
Anthony Morgano | Democrat 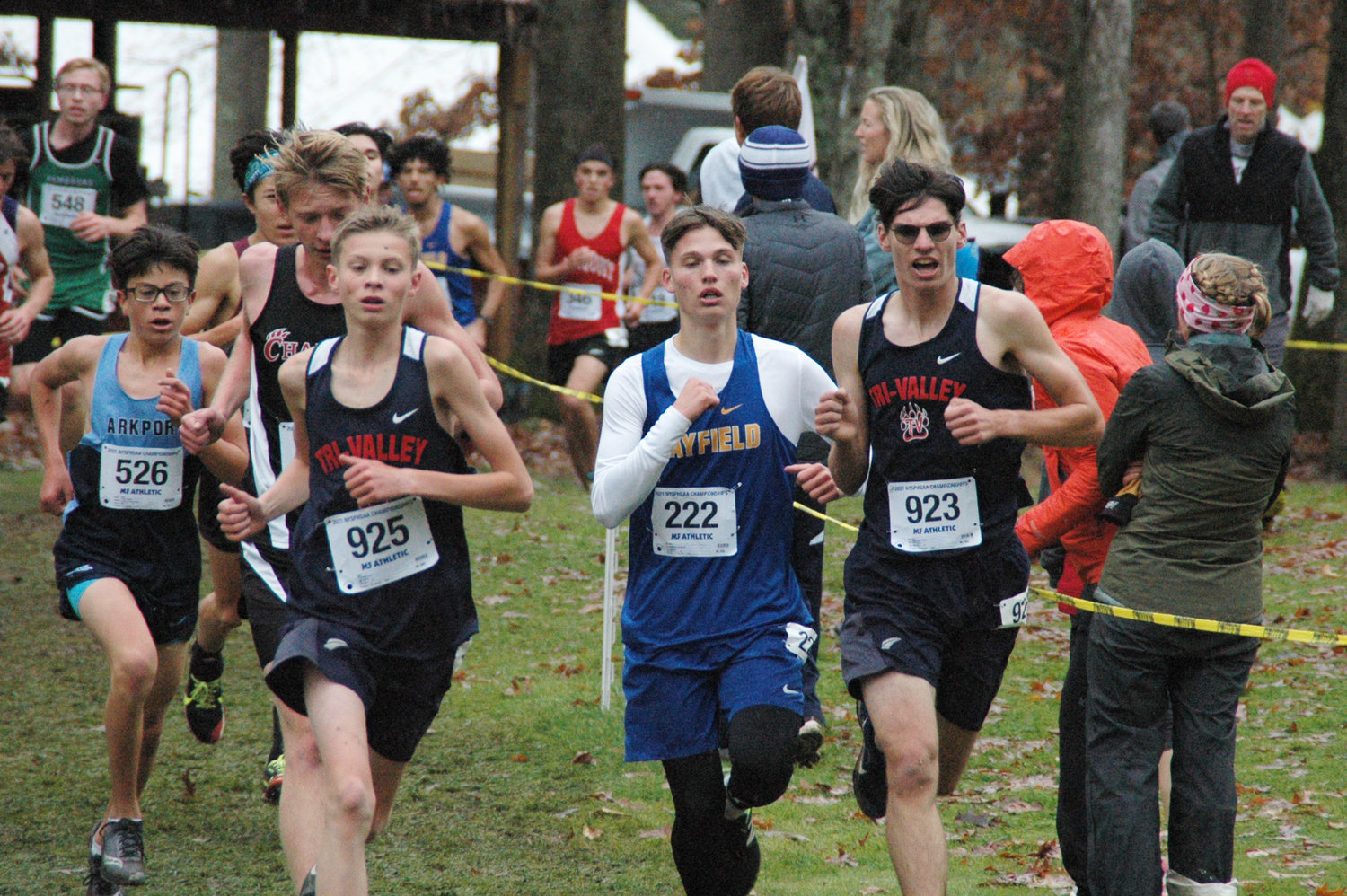 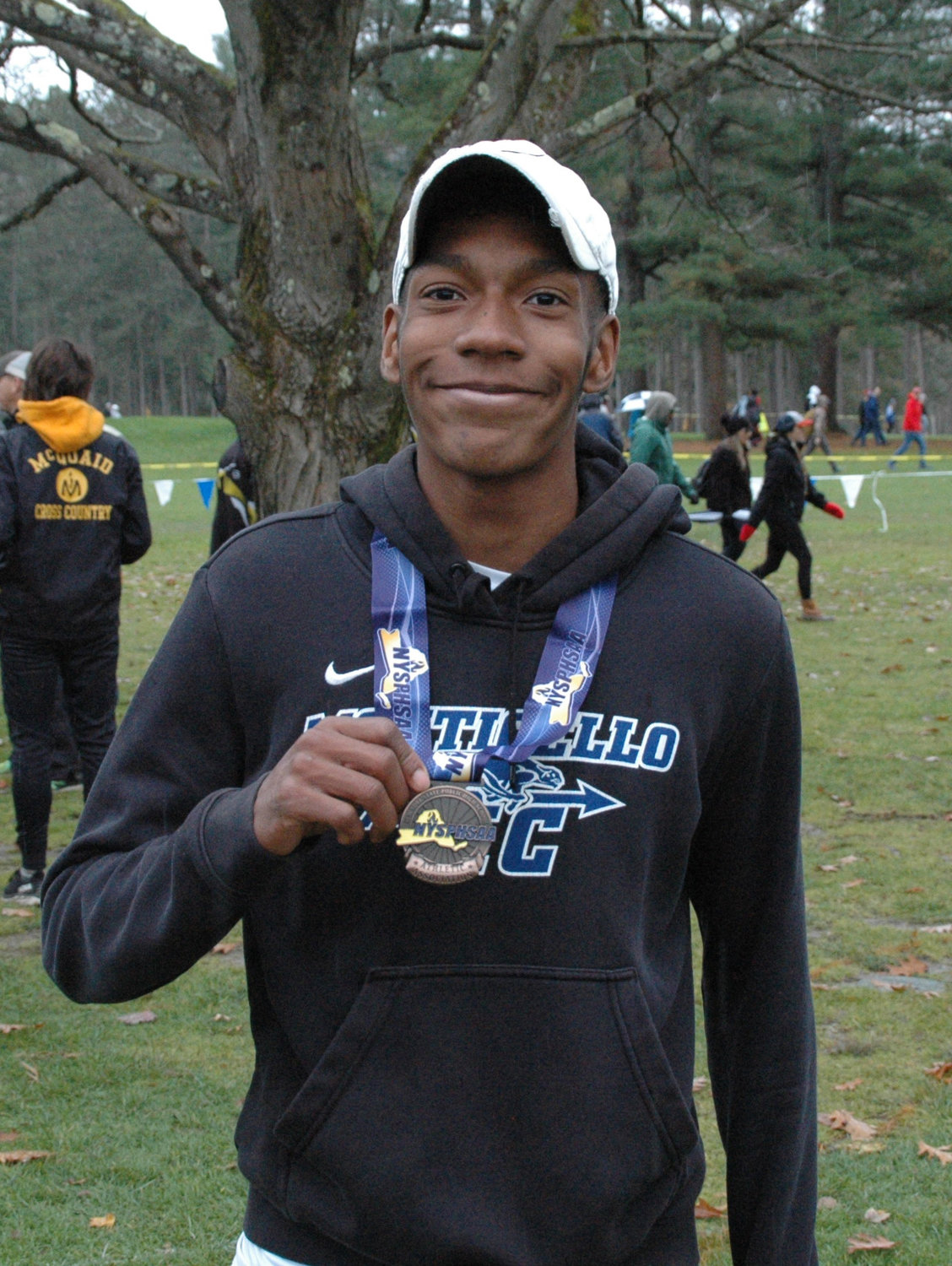 Finishing 3rd in the Class B race, Monticello’s Evan Waterton finished 8th out of the 477 runners that competed on Saturday.
Anthony Morgano | Democrat 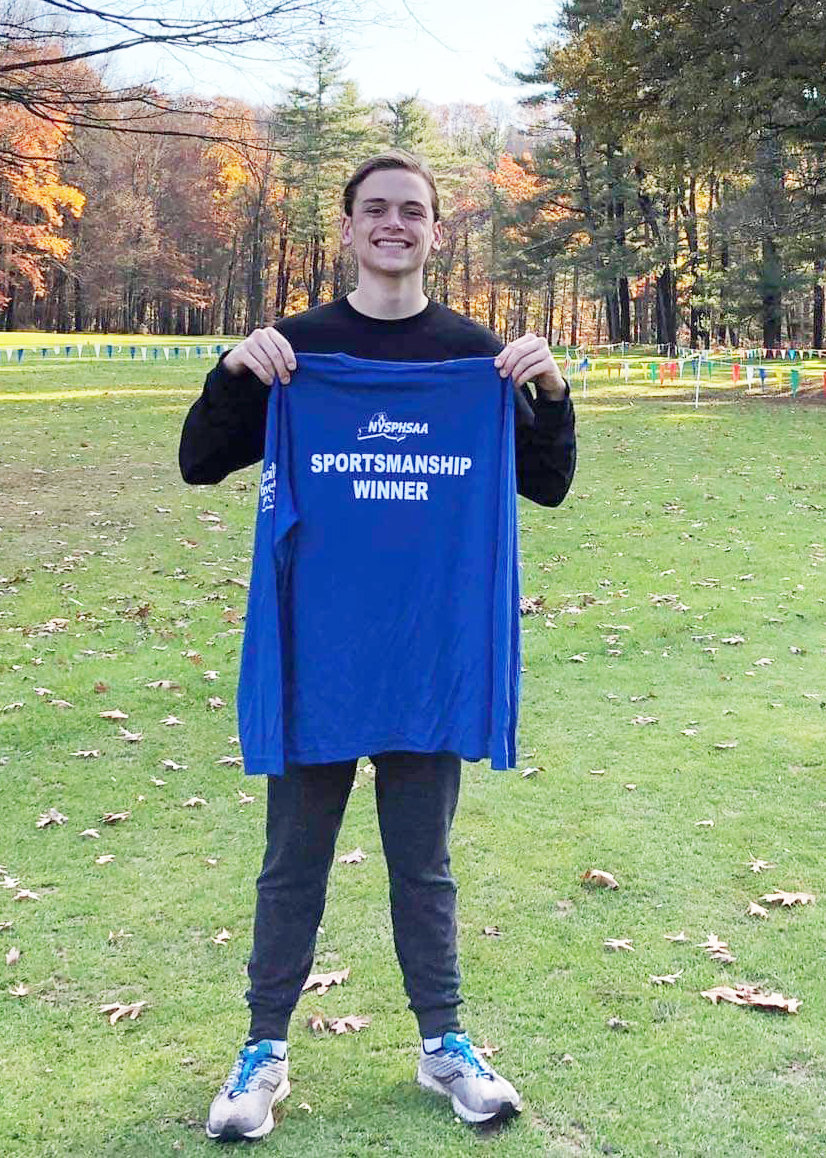 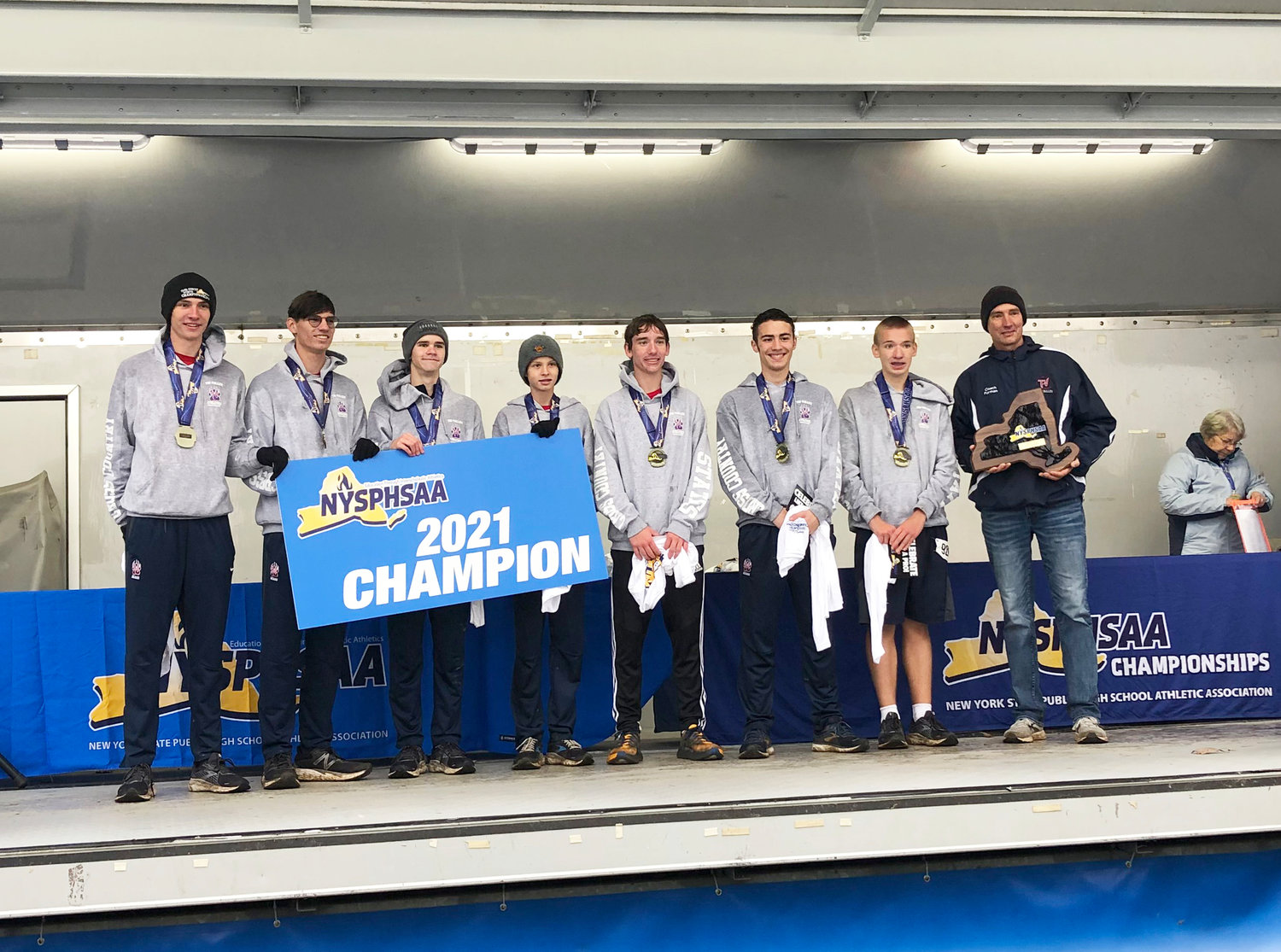 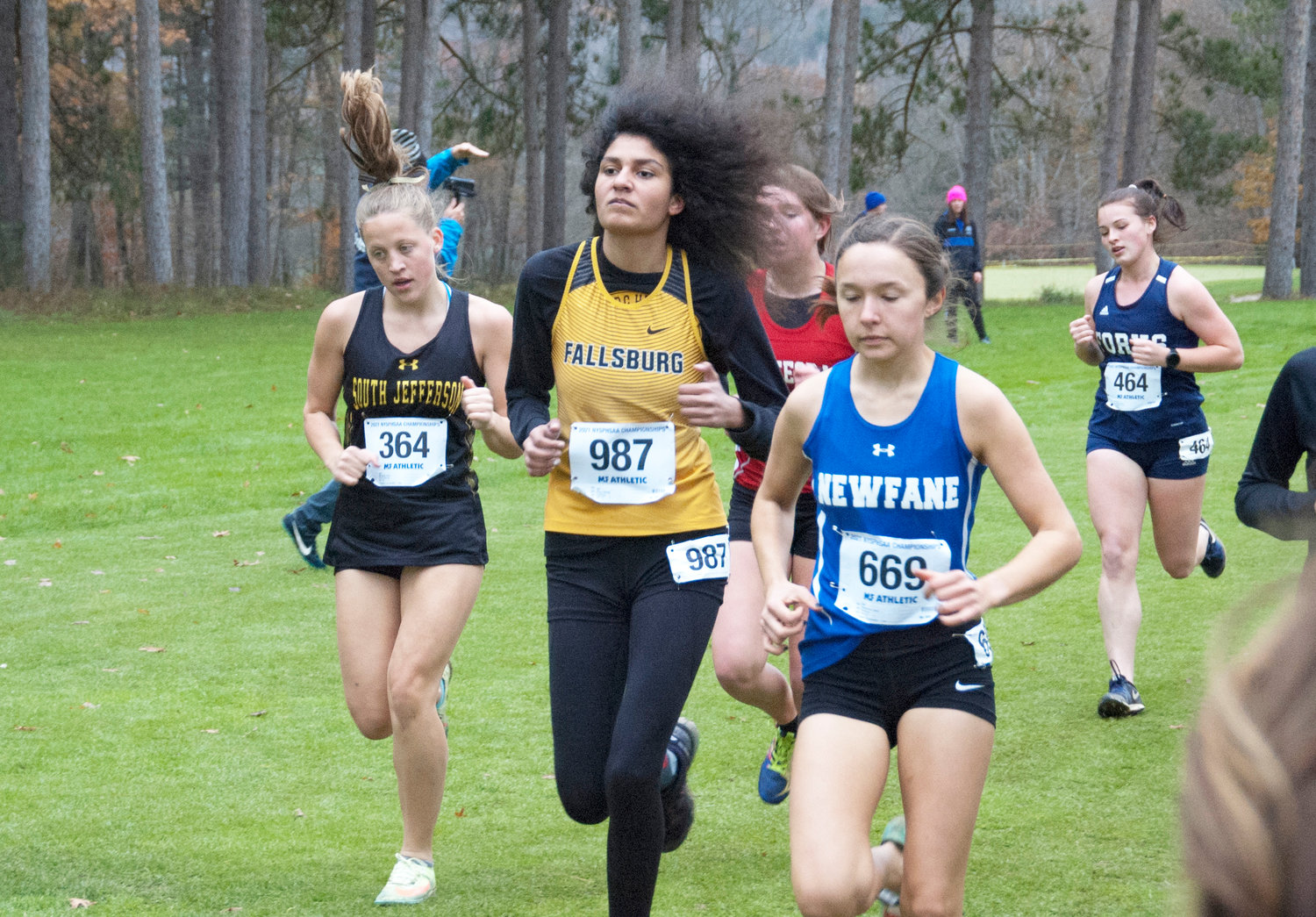 Focusing their sights on a state championship, the first-ever won by a boys cross-country team in school history, The Tri-Valley harriers began last summer, to build their mileage and train assiduously. Coach Chip Furman and his able assistant Tyler Eckhoff repeated the assertion that the team could reach that previously unattained milestone. Looking back over the arc of the Bears' achievements and its top runner, junior Adam Furman, it became more and more apparent as the victories and stellar times piled up in the sequence of challenging invitationals around the state, that this lauded achievement could indeed come to pass.

By day's end at this year's NYSPHSAA Cross-Country championships, the goal of a team title had become a reality as Tri-Valley bested second place Arkport by a score of 41 to 63 with Furman placing a close second to Beaver River senior Colton Kempney, a runner he bested back at the McQuaid Invitational in Rochester. Kempney was going to be a tough one to beat, having finished second twice before. Coach Furman and his eldest son had figured their strategy out prior to the race. Adam would have to create a gap between himself and Kempney somewhere in the middle of the race. The two ran close from the start but Furman got ahead. Then came the big hill and Furman's lead diminished as he felt the fatigue and could once again hear his competitor right behind. Furman led until the final 100 meters when the senior used a great kick and bested him by four seconds. Furman's time of 16:10.1 was his best but Kempney's 16:06.5 was just a shade better. "That's the difference between a senior and a junior," averred Coach Furman.

Adam has another year and another crack at the state title. Don't bet against him.

Sullivan West senior Reece Maopolski was the Section 9 recipient of the Sportsmanship Award, an honor previously won by his brother Bryce. In the day's races merged results of 477 runners, Furman was tenth overall. T-V was the fastest Class D or C team. They finished seventh overall in the merged results out of 41 schools competing.

The support of the community was off the scale. Not only was there a pep rally and a send off, but a cavalcade of fire trucks, ambulances and a caravan of cars laden with fans greeted the bus as it exited Route 17 at exit 100 and accompanied the victorious Bears back to school. T-V girls had won five state titles in the past in the 80's and three in the 90's. But as noted, a boys team never won until this year. Former coaches Joe and Missy Iatauro made the journey from Georgia to watch the race as did former soccer and softball coach Mary Feusner.

Monticello's Evan Waterton takes 3rd in "B"; 8th in merged results of all runners

Last week at sectionals, Monticello senior Evan Waterton, bouncing back from a nagging ankle sprain, came in second to Mount Academy's Ike Blough. After the race Waterton promised to vie for the state title. He came in third with a speedy time of 16:05.9. He beat Blough who ran 16:17.3. Waterton's time was the eighth fastest on the day out of the 477 runners.

Already on the national radar for his exceptional steeplechase performances last spring, Waterton will look to the balmy track season to really leave his mark before heading off to compete at the next level.

All in all it was a spectacular season for Sullivan County runners replete with a state championship, something rarely accomplished by a local team.