MAMAKATING — After hearing the news that Councilman Thomas Morrow will step into the role of Deputy Highway Superintendent in the Town of Mamakating, Rob Hufcut, the current highway … 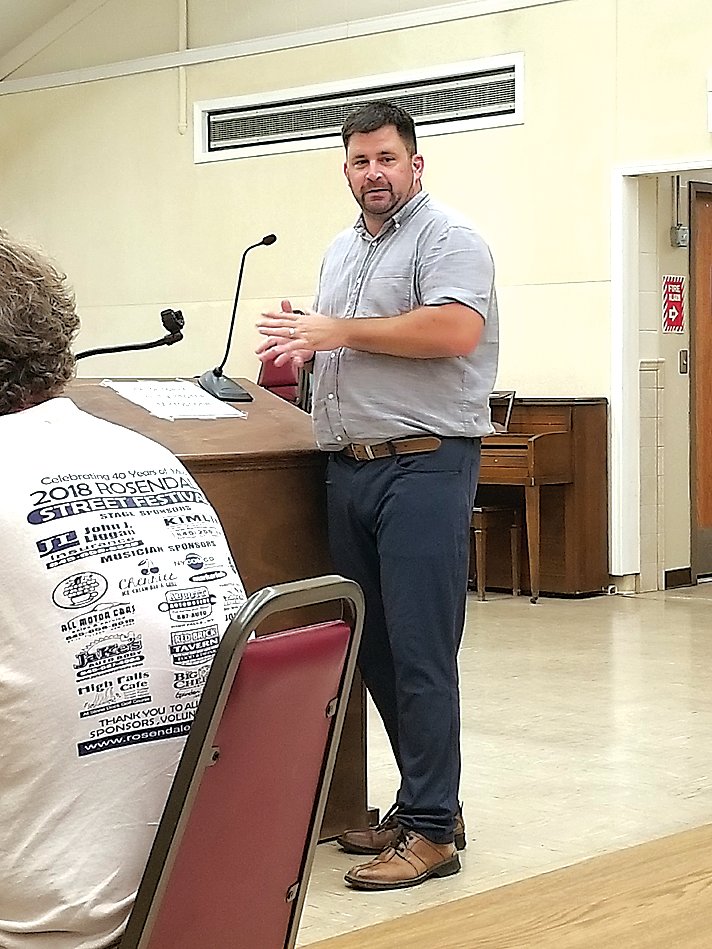 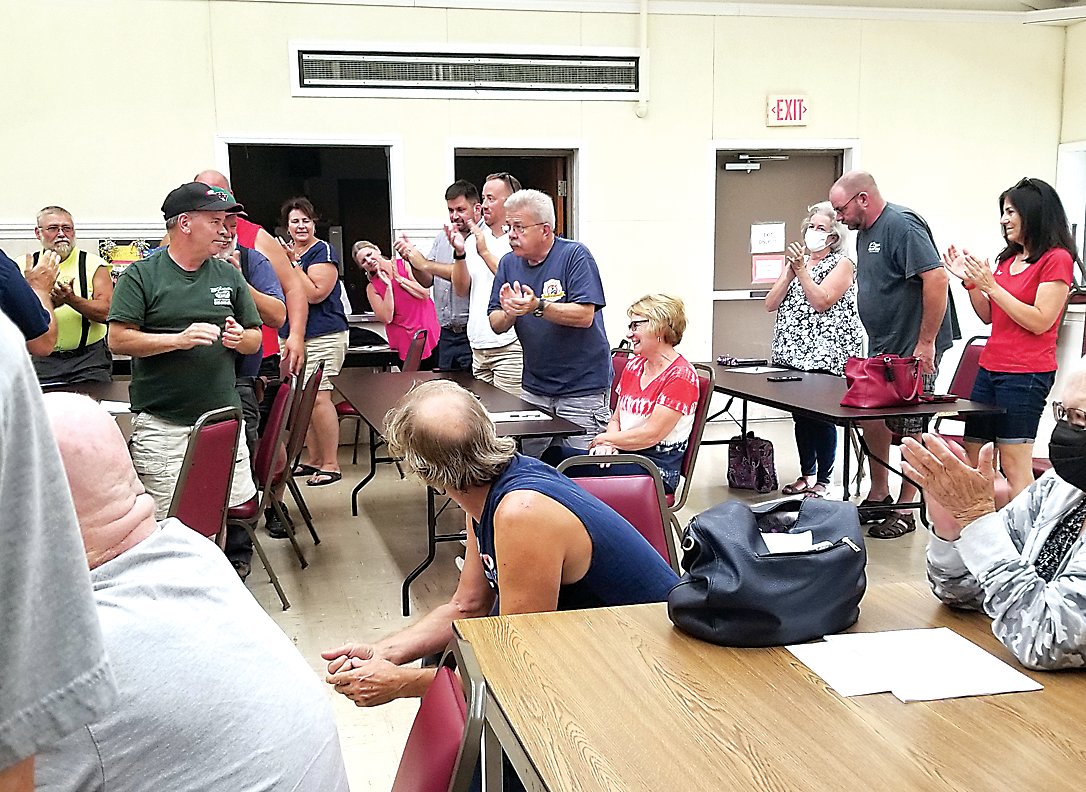 The board and residents give JoAnn Salamone a standing ovation. Salamone is seated in a red, white, and blue tee shirt.
Samantha Montagna | Democrat
Previous Next
Posted Tuesday, August 9, 2022 6:10 am
By Samantha Montagna

MAMAKATING — After hearing the news that Councilman Thomas Morrow will step into the role of Deputy Highway Superintendent in the Town of Mamakating, Rob Hufcut, the current highway superintendent, reached out to the Democrat to make his voice heard.

Hufcut claims that he wants to come back to work, but Mamakating’s Town Board is against it. Hufcut was arrested by New York State Police on May 31 and charged with two counts of sexual misconduct with a child stemming from approximately twenty years ago.

Since his arrest, he has not come to work or publicly responded to any comments against him. Since he is an elected official, he has retained his position, and this has drawn fire from some residents who have voiced their opinion during public comment sections of town board meetings.

Bill Lothrop, Chairman of the Wurtsboro Fire District’s Board of Commissioners, has addressed Hufcut in a past meeting and has asked him to take a leave of absence.

Hufcut told the Democrat that he does not want to take a leave of absence because he wants to do the job he is currently getting paid to do.

He said he does not want to sit home and collect a handout, and the taxpayers deserve the person they voted for to do the job.

“I took a lot of time and pride in my job,” Hufcut said.

Hufcut also said he was advised by his lawyer to not watch the town board meetings, but Hufcut’s wife has always watched the meetings; but has since stopped watching.

Hufcut also said that his charges are accusations and he is innocent until proven guilty.

He said he is “being crucified” because people think his accusations are true.

Hufcut claimed that the town attorney, Benjamin Gailey, told his attorney that he’s not wanted at the Highway Department and coming to work would cause issues.

Hufcut stated that he was told that the highway workers would walk out if he entered the building, and Hufcut noted that he did not want that and wants “to keep things peaceful.”

Hufcut also addressed claims that he has abandoned his post and has not contacted the board. He said that he has sent several registered letters to the board, all of which remain unanswered.

Hufcut ended the conversation by stating that he wanted to reach out to have his voice heard, and that he wants to return to work.

During their board meeting on August 2, Town Supervisor Mike Robbins addressed the current situation regarding Hufcut and his highway superintendent position.

JoAnn Salamone has resigned from her position as deputy highway superintendent as of July 27.

Supervisor Robbins stated that she is retired, and the position is a lot for her, but everyone on the board and the highway department “thinks she’s the best.”

Salamone received a large applause after Robbins’s comment. Salamone will stay on as a part-time account clerk, Robbins said.

Robbins explained that after five days, the board can appoint someone in that position. Councilman Thomas Morrow gave up his seat on the Town Board as of August 2 and was appointed as deputy highway superintendent in a unanimous vote.

Robbins claimed that Hufcut also said that he would come to work with a videographer in case there were problems, but Hufcut did not return to work on either scheduled day.

Robbins continued that Hufcut’s lawyer said Hufcut would take a buyout of one million dollars, and Robbins stated that that was not an option, but Hufcut is free ask for his keys and come back to work at any time.

Former Town Supervisor Janet Lybolt commended the board for appointing Morrow even though the board must pay two salaries now. She also asked the board to consider asking Joe Marshall to fill Morrow’s seat since they were very close in the polls when Marshall ran for the seat this past November.

Richie Dunn thanked Salamone and explained that she was not handed “a folded napkin,” and that it has been “chaos.”

Dunn also said that Salamone does not feel comfortable being in the building if Hufcut returns given his charges. Dunn also addressed Hufcut and said that he does not care if Hufcut tries to belittle him but asked him “to be a man” and resign.

Bill Lothrop also asked Hufcut to “step up and do the right thing and take a legitimate leave of absence in writing” and let everyone move on.

“To continue on in this fashion can only be construed as cowardly at best,” he said.

Lynelle Alessi stated that it’s better to be cautious given the accusations, and Hufcut should not be paid. She noted that he would have never been elected if people knew about those accusations beforehand.

Newly appointed Deputy Highway Superintendent Thomas Morrow came to the podium and said that he was “beyond thrilled, excited, nervous and anxious,” to take on this position.

He said he also hopes that this will end up in an election where people can vote for him in this position.

“I want to work for the people of this town,” and he has longed to be more involved in the highway department, he said.

He also said he welcomes criticism and wants to prove himself. Morrow said he did not have much to say to Hufcut other than everyone seems to be on the same page, and “it’s time to move forward.”

After Deputy Supervisor John Rufer read the highway superintendent’s report, Supervisor Robbins stated that Salamone was a pleasure to work with. He also stood up and started a standing ovation for Salamone. He also thanked Morrow and said that he was a hard worker on the board, and he will do good things for the highway department.

He also noted that by the next town board meeting, the board hopes to start the process in filling the empty council seat.