Lady Bulldogs light up senior night with another win over Chester

LAKE HUNTINGTON – Aptly put, the Sullivan West Lady Bulldogs were “In the pink,” on their senior night both literally and figuratively speaking. Adorned with their pink socks to …

Lady Bulldogs light up senior night with another win over Chester 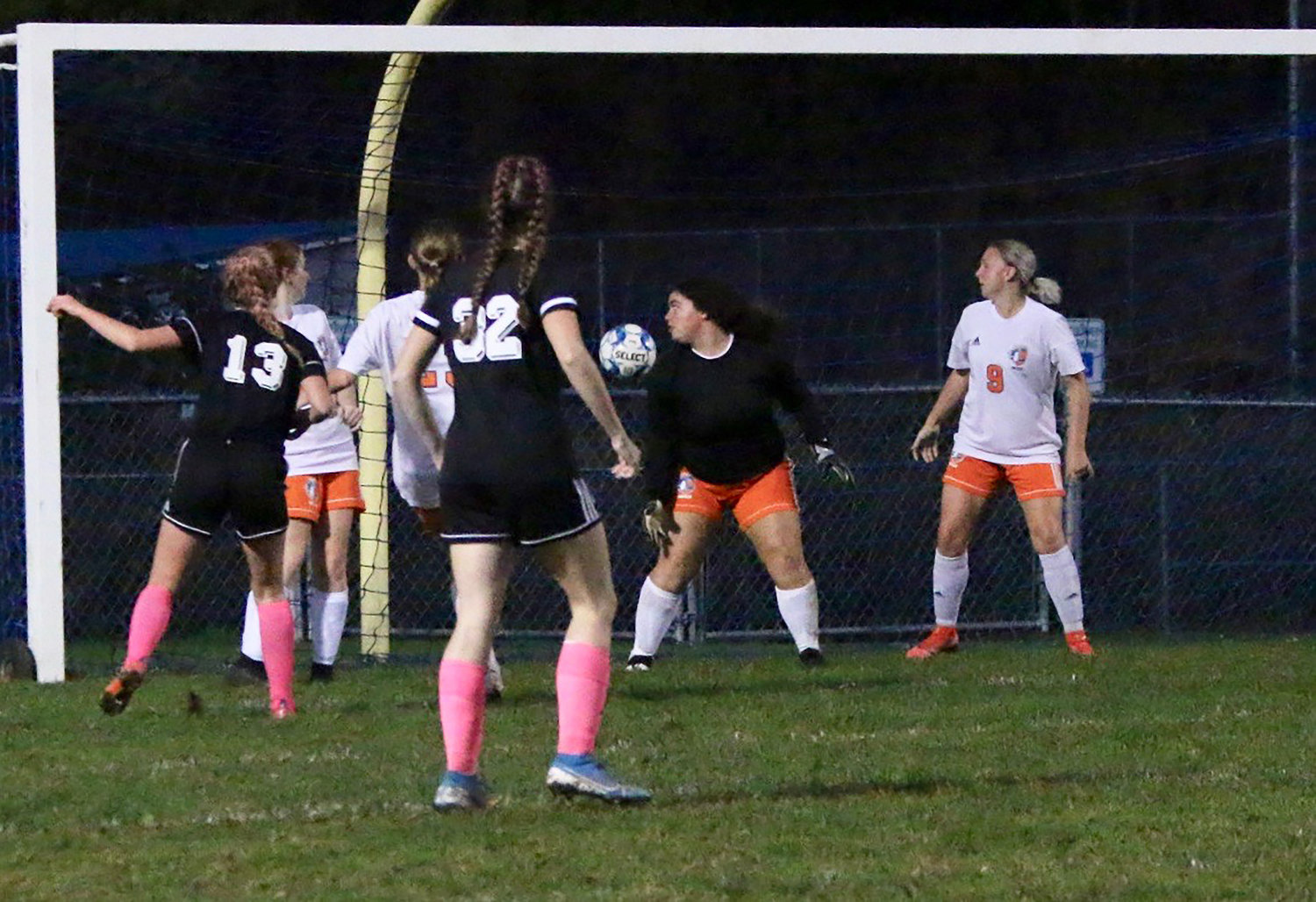 Sullivan West’s Sophie Flynn (13) watches as her shot sails by Chester keeper Isabella Velilla. With the previous goal by Karlee Diehl, the Bulldogs now had a 2-0 lead. Flynn’s goal came off an assist from Abby Keller.
Richard A. Ross | Democrat 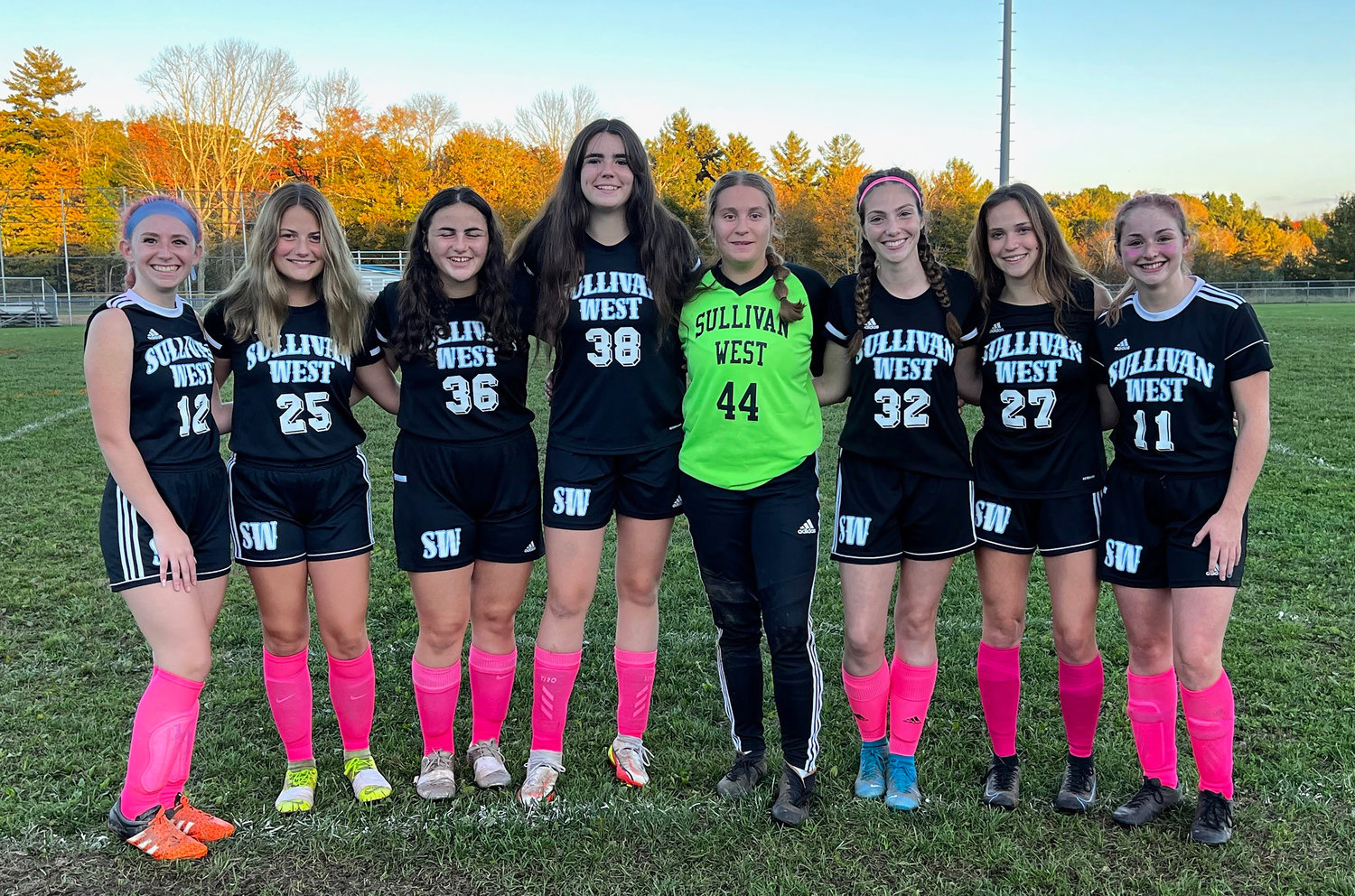 LAKE HUNTINGTON – Aptly put, the Sullivan West Lady Bulldogs were “In the pink,” on their senior night both literally and figuratively speaking. Adorned with their pink socks to show their support for National Breast Cancer Awareness month, they added nifty accents of sprayed pink hair which were laughingly and fashionably applied before their rematch with the Lady Hambletonians. As it would turn out for seniors Abby Keller, Annabelle Rutledge, Mia Nunnari, Taylor Wall, Riley Ernst, Taylor Brustman, Grace Boyd and Riley Johnston and their younger teammates, it was an evening to truly be in the pink, the pink of victory that is, garnered with their second 2-1 win over Chester to marshal the season sweep of their new league rival. Chester was added to Class C this year, rounding out the division with Tri-Valley and S.S. Seward.

From the introduction of the seniors posing with their family members to the final whistle, it was a night of thrills and chills as the temperature dipped and the action heated up. It was a real pitched battle, which for most of the game had Sullivan West charging into Chester’s defensive third. Up in the bleachers, the Dawg Pound was providing its usual vociferous support, while down on the field the play became more and more intense. The teams battled hard from the get-go, but it wasn’t until 12:49 remained in the first half that Karlee Diehl broke through with an unassisted goal that whizzed by Chester keeper Isabella Velilla for the 1-0 lead. About seven minutes later Sophie Flynn took a feed from Abby Keller to make it 2-0 and it looked like the Bulldogs had the momentum, especially with their fine mid-field play as they were winning the 50/50 balls and turning up the heat on the Chester defenders.

Then suddenly, though Halloween is still a bit more than two weeks away, it became trick or treat for Chester abetted by a most unusual call. Sullivan West was set to launch a goal kick with 2:54 remaining in the period, but apparently the ball was touched again after it was set which triggered a “double touch” ruling by the official. That gave Chester a direct kick in the box which was fended off. But on the ensuing play, a shove within the box by a Sullivan West player resulted in a penalty kick launched by Chester senior Alexa Tierney that sailed into the right-hand corner of the net by an outstretched Ernst to make it a 2-1 game. Sullivan West coaches were mystified by the double touch call, which indirectly led to the PK that cut their lead in half.

As it would turn out both teams were scoreless thereafter for the duration of the first half and all of the second. Grace Boyd launched some long-range missiles that went wide, much to the dismay of the cheering horde up in the stands. Statistics clearly showed that the Lady Westies had the better of the play with nine corner kicks to Chester’s two. Offensively, they launched a total of 31 shots with 14 of them on-goal. Chester got off nine, seven of which were on goal. Sullivan West improved to 8-2 (3-2 league), while Chester fell to 2-8 (1-4).