No time to ‘waste’

No time to ‘waste’ 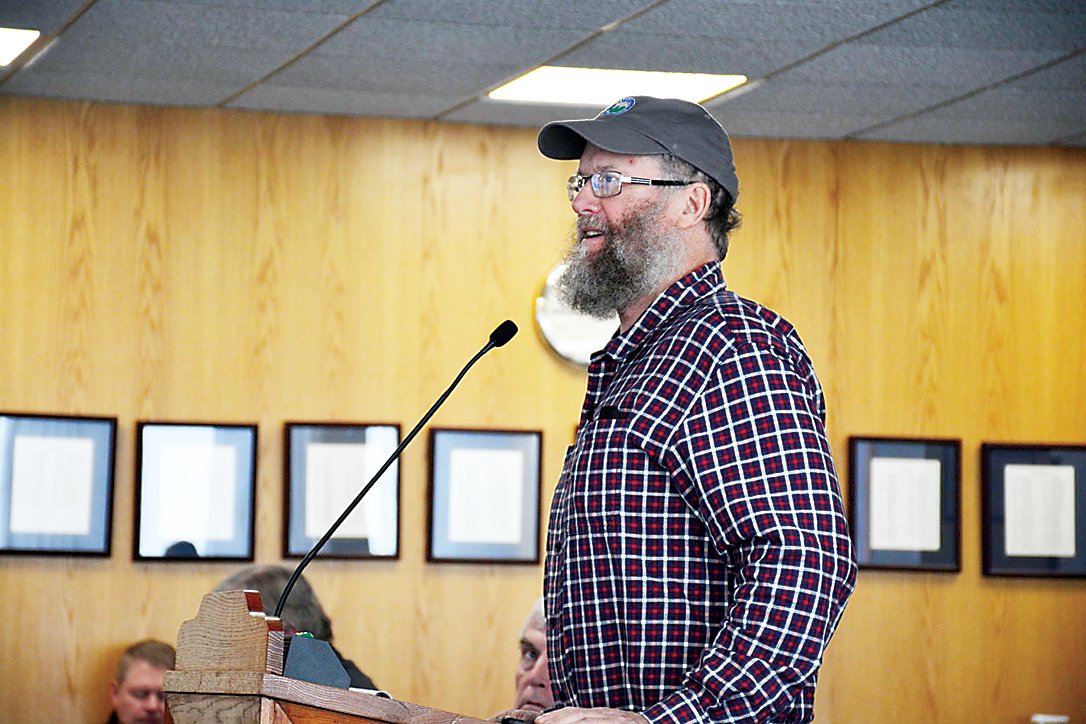 Catskill Mountainkeeper Associate Director Wes Gillingham was one of several members of the public who were critical of a resolution that would see Hughes Energy lease space at the County Landfill for a research and development operation.
Joseph Abraham | Democrat 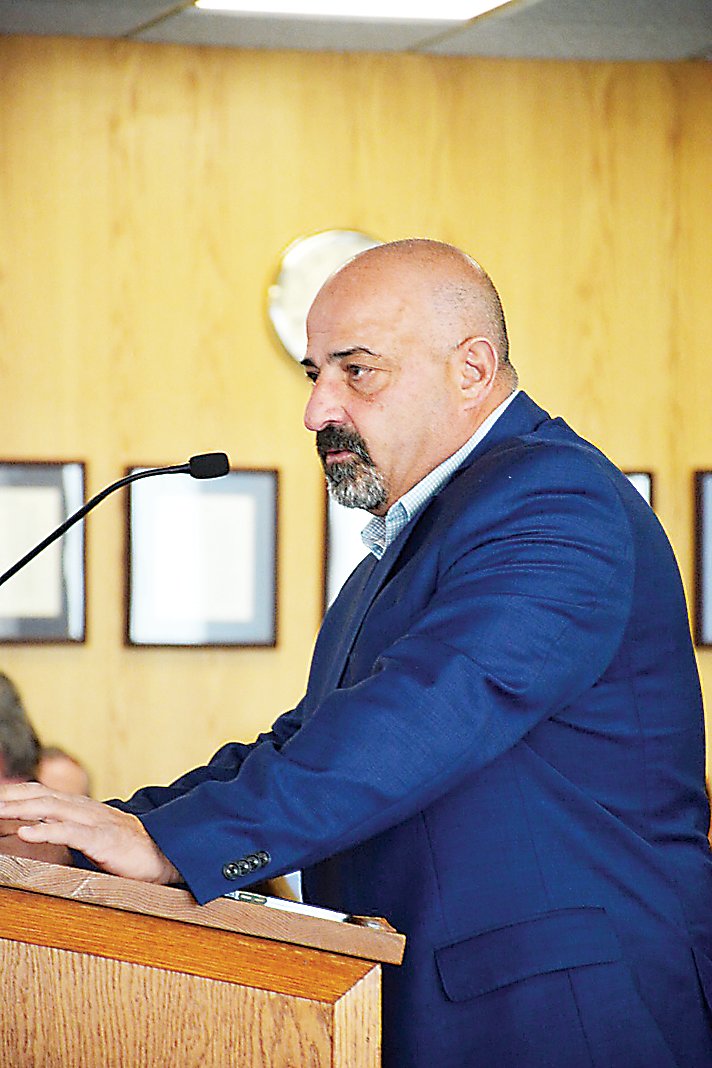 Joe Betro, Director of Business Development for Hughes Energy, made a presentation to legislators at a special meeting on Thursday.
Joseph Abraham | Democrat
Previous Next
Posted Tuesday, November 8, 2022 6:10 am
By Joseph Abraham

MONTICELLO –– “We need a solution fast,” said Legislative Chairman Rob Doherty on Thursday, referring to the coming closure of Seneca Meadows landfill in 2025. Several counties that utilize it for a significant portion of their waste, including Sullivan, are looking at alternatives before that day arrives.

Hughes Energy has approached Sullivan to create a research and development (R&D) operation at the County Landfill to explore “various potential solutions to the County’s Solid Waste Management issues,” according to a resolution that was on the agenda of Thursday’s special meeting of the legislature.

Based in Yonkers, Hughes Energy describes itself as a clean-tech company that recycles unwanted organic materials into high value energy and consumer products to help achieve a zero carbon world.

The resolution would authorize a lease agreement between the County and Hughes for use of a 10-12,000-square-foot building at the Landfill. Doherty, however, implemented the Legislature’s little-used “Rule 36” at the start, which moved the resolution to the full board  meeting on November 17, halting action for the time being.

Under the proposed agreement, the County would provide up to 20 tons/day of solid waste to Hughes for use in its R&D operation. The project would need the green light from the State Department of Environmental Conservation (DEC) before it could go forward.

Joe Betro, Director of Business Development for Hughes Energy, was at Thursday’s special meeting, also mentioning a possible larger operation in the future. As part of the R&D operation, he said Hughes would use steam autoclaving technology to turn the waste into biofiber. Betro added that other companies using similar systems with the same technology are running in Europe.

Hughes is also looking at creating bioethanol that could be made into jet fuel additives, as multiple airlines seek to transition away from fossil fuels.

Since there was no public comment allowed at the special meeting, several attendees criticized the proposed project during the preceding Planning Committee meeting, referencing projects the company has proposed in other areas of the State which has drawn the ire of local residents.

“They position their process as speed composting,” said Callicoon resident Rebekah Creshkoff. “Make no mistake, this is not composting, and the product they create is not anything I would want my farmers to put on their fields.”

She argued that the autoclave technology, which processes solid waste and other organic materials at 300 degrees Fahrenheit, may kill pathogens but does nothing to eliminate heavy metals or hazardous chemicals. She also said Hughes’ R&D facility may still discharge 1,200 gallons of wastewater a day, based on previous proposals.

“Where will that wastewater go? What facility will process it? Where will the water for their steam autoclaves come from?” Creshkoff asked. “Hughes claims they will use their steam autoclaves to spin garbage into gold. But their so-called recycling technology has been more aptly described as a garbage pressure-cooking plant. Does Sullivan really want to greenlight a controversial, experimental project that so many other communities have spurned?”

Catskill Mountainkeeper Associate Director Wes Gillingham said it was “quite ridiculous” that legislators were entertaining a resolution without all the information.

“The resolution is saying that the DEC needs to endorse this project, [but] you haven’t even seen a presentation on what the project is,” he said.

Hughes is currently proposing to construct and operate a new “waste to energy” municipal solid waste management facility with a proposed annual maximum throughput of 176,400 tons in the Town of Roxbury, Delaware County.

Gillingham said that while Hughes claims to be “clean,” its first proposal in Roxbury was to make pellets that would be burned in Europe.

“They wanted to make the pellets out of the garbage that was coming from this huge area of the Catskills and the Hudson Valley, ship it down to New York and then ship it off to Europe. They’re looking at creating a product that they can sell,” said Gillingham. “I completely agree that there’s an issue with solid waste, no question there. But this is a clear example of what some people call a false solution, or what a lot of people call a dangerous distraction.”

Betro acknowledged that pellets were Hughes’ core business, but when they sat down with the DEC in Albany and were told that the agency would not issue a permit because the burning of those pellets created carbon dioxide gas in the atmosphere, Hughes had to come up with an alternative solution, which is to put the biofiber into paper mulch. Betro said that project has received approval from the DEC, but Hughes is holding it up in search of a new site because of Roxbury residents’ concerns about the initial proposed location.

District 2 Legislator Nadia Rajsz asked about the possibility of toxins being released from autoclaves, but Betro said the only emissions would come from the propane boiler used to power the autoclaves.

He further explained that they can’t use an electric boiler as it doesn’t generate enough heat, and added that during the process, the steam moves from one autoclave to another, is cleansed and then is reused. Betro also claimed Hughes has documentation to prove that its process is clean and safe.

Betro noted that while composting is great for eliminating waste, methane (which is 84 times more potent than carbon dioxide) is emitted into the atmosphere as the garbage decays.

Betro told legislators that the R&D operation would be a $6 million investment, costing the County nothing.

He indicated the pilot project could be operating within 6-7 months with DEC approval, and if the County wanted to move forward with the full-blown operation (400 tons a day), the approval process would take 18 months.

“At the end of the six months of our pilot program, if it doesn’t do what it says it will do, you’re not going to move forward with either project,” he said. “There’s zero risk for the County here.”

Betro said the DEC has stated that they are not going to permit any new landfills or expansion of existing ones. He added that when there’s no place to put garbage, several local collection companies might be out of business, and the County doesn’t own any haulers.

The County currently ships solid waste upstate at $95 per ton, which Doherty said comes out to about $16 million per year.

According to Betro, that cost will be $300 per ton in Sullivan, Orange and Westchester counties within five years, bringing the annual tab to at least $48 million.

“That would bankrupt this County,” said Doherty. “It’s coming at us like a freight train, and we better do something.”