On the Road Again

We recently took our first (and hopefully not last) road trip of 2022. My daughter Liz, son-in-law Peter, and darling granddaughter Adeline have been on the move for the two weeks of her spring …

On the Road Again 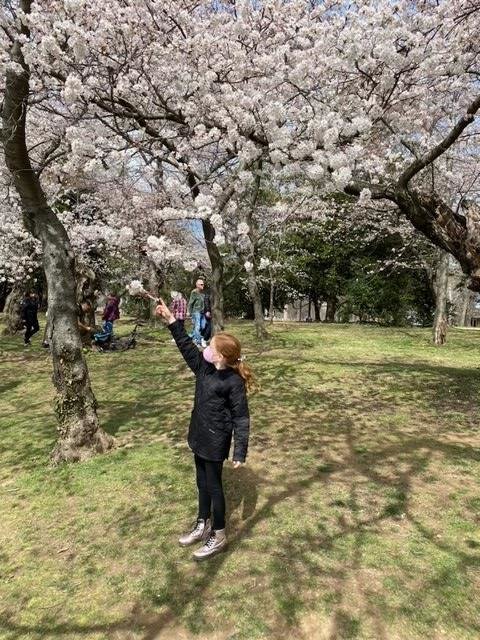 Quite by accident, we discovered that we were just in time to see the famous cherry blossoms.
Contributed photo
Posted Friday, March 25, 2022 7:00 am
Kathy Werner

We recently took our first (and hopefully not last) road trip of 2022. My daughter Liz, son-in-law Peter, and darling granddaughter Adeline have been on the move for the two weeks of her spring break, and I tagged along for some of their travels.

They began in Manchester, Vermont, staying at the lovely Kimpton Taconic Hotel. They skied on Stratton Mountain, and then drove down to New York to pick me up. Our next stop was Washington, D.C. where it was a sunny 70 degrees.

Quite by accident, we discovered that we were just in time to see the famous cherry blossoms.

First we had to walk over to Zatinya, the crown jewel in Chef José Andrés’ restaurant kingdom. This eatery serves Turkish, Greek, and Lebanese food on small plates for an experience like no other. The pita bread just keeps on coming out of the kitchen still warm, and the spreads and salads and fish and lamb dishes are so good you are hard pressed to keep yourself from overeating.

The next morning dawned a bit cooler, perfect for a walk to the Tidal Pool. The cherry trees were one day away from peak bloom and looked gorgeous in their pale pink headdresses. As we walked along the Pool’s edge, we came upon the impressive and inspiring Martin Luther King Jr. monument surrounded by some of his most memorable quotes.

Then we walked over to the Lincoln Monument, which never fails to give me goosebumps. The complete text of his immortal Gettysburg Address is chiseled on one of the walls of this monument and many of the visitors were taking the time to read it. It remains one of the most concise, somber, and timeless reflections on our country ever spoken. All schoolchildren should commit it to memory.

Our next destination was the National Museum of African American History and Culture which opened in 2016. As its website says, “…(it) is the only national museum devoted exclusively to the documentation of African American life, history, and culture.” Beginning with the earliest days of the slave trade, the museum traces the history of African Americans through enslavement, Emancipation, segregation, and the continuing struggle for equity and equality.

It highlights the accomplishments of many famous African Americans and many who, while less well-known, are equally important. The museum is huge, and one could spend days exploring all it has to offer. It fulfills its stated purpose to “explore what it means to be an American and share how American values like resiliency, optimism, and spirituality are reflected in African American history and culture.”

We headed back to our hotel, the Hay-Adams whose motto is “The only thing we overlook is the White House.” It is literally steps away from the White House and we had many opportunities to walk past the house where President Biden works every day. In front of the White House, there were several peaceful demonstrations in support of the Ukrainian struggle to remain free.

We hadn’t been to D.C. in years, and it was inspiring to visit our nation’s capital again.

It reminds us despite recent insurrections, ours is still a country with a rich tradition of laws and justice. As Mr. Lincoln said in dedicating that battlefield in Pennsylvania, “It is rather for us to be here dedicated to the great task remaining before us—that from these honored dead we take increased devotion to that cause for which they gave the last full measure of devotion—that we here highly resolve that these dead shall not have died in vain—that this nation, under God, shall have a new birth of freedom—and that government of the people, by the people, for the people, shall not perish from the earth.”