But in the case of Tri-Valleys’ immensely talented Cross-Country Furman siblings: … 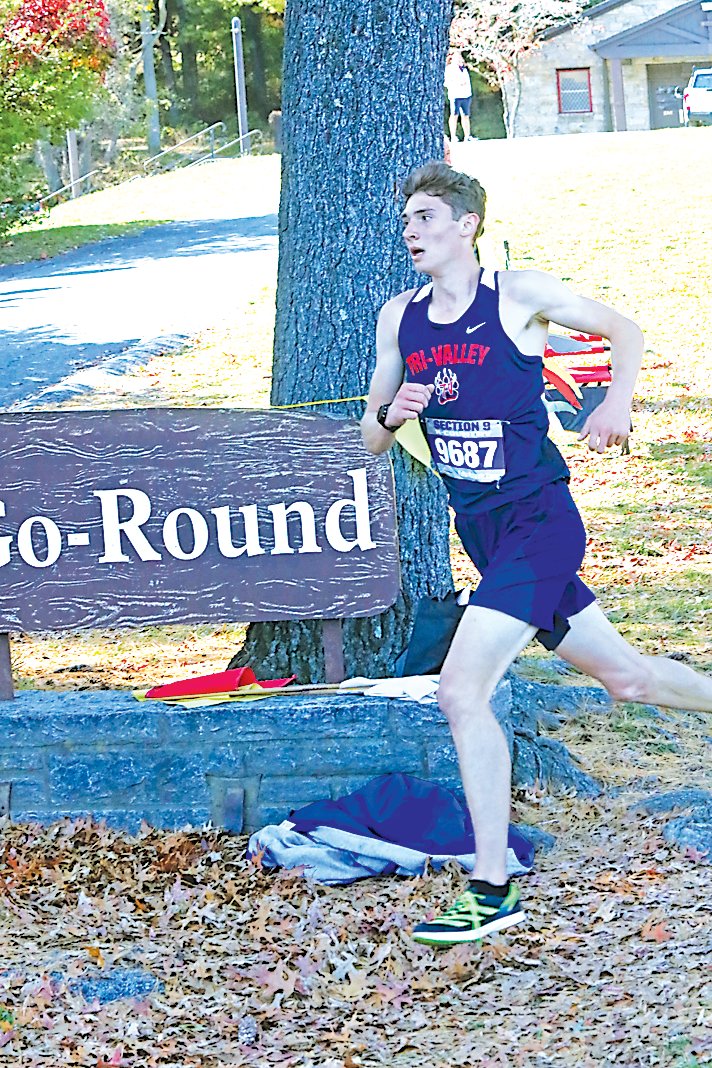 Adam’s win at the OCIAA championship was historic. His time of 14:53.50 set a new school and county record for the event. It was the first sub 15:00 time in 20 years and placed him 17th on the all-time list of the event’s storied history. To Adam, it was an accomplishment that will long stand out as the most auspicious.
Richard A. Ross | Democrat 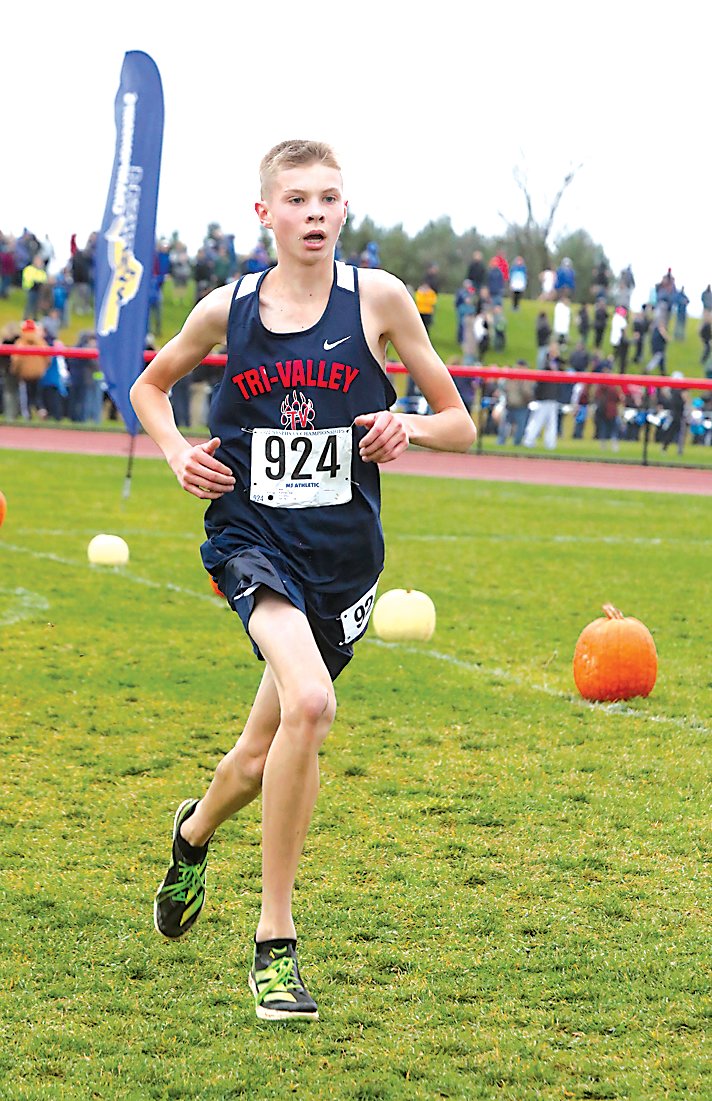 Finishing second at states behind his brother Adam was a remarkable achievement for Van Furman. No doubt a state championship medal is a goal that Van will work assiduously towards.
Richard A. Ross | Democrat 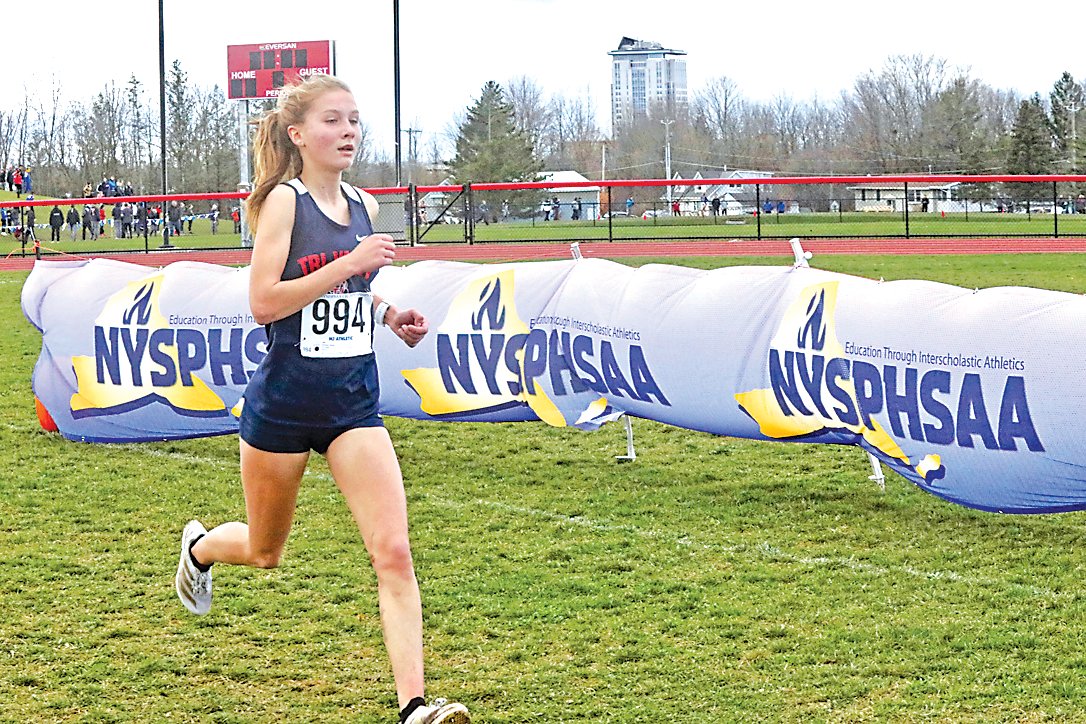 Completing the trifecta of outstanding state meet performances by the Furmans, Eighth-grader Anna finished second with a great burst of speed in the final 800 meters.
Richard A. Ross | Democrat 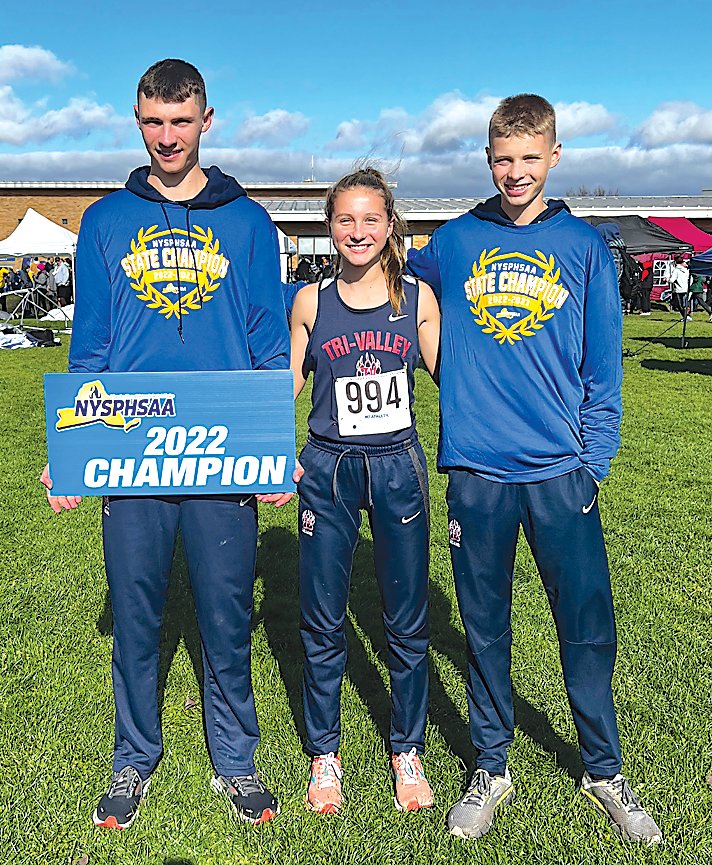 Adam, Anna and Van Furman bask in the glory of their state championship performances. Adam was first, Van and Anna finished second.
Richard A. Ross | Democrat
Previous Next
Posted Friday, December 2, 2022 6:30 am
Richard A. Ross

But in the case of Tri-Valleys’ immensely talented Cross-Country Furman siblings: Adam, Van and Anna, that saying, (which may prove true on occasion), registers as an indisputable fact, not to mention, a huge understatement.

The Sullivan County Democrat Outstanding Athlete of the Fall is an honor intended to be awarded to one individual whose performance throughout the season consistently stands out as exceptional and exemplary. Last fall that honor fell to then Tri-Valley junior Adam Furman who led his team to a first-ever T-V boys Cross-Country state championship title with his second-place finish at states. That performance was just one of the many outstanding milestones of his 2021 season.

This fall, Adam surpassed his feats of a year ago in so many ways, including becoming the New York State Public High School Association (NYSPHSAA) Class D champion not long after nailing down yet another Section IX title a week prior.

By Adam’s estimation though, his most memorable moment of the fall was his 14:57.50 winning time at the OCIAA championships, a time that set a new school and county record and the first sub-15:00 time in the event in the past 20 years. It enshrined Adam’s place as the 17th fastest runner in the race’s history.

“I always dreamed of making it onto that list,” he says with pride.

Adam’s OCIAA title was his second consecutive one, but this year’s was by far an extraordinary accomplishment, that in and of itself would have warranted Adam’s choice as this year’s Outstanding Fall Athlete.

But as it turned out, his siblings Van and Anna had remarkable seasons of their own as well. To wit, the two younger Furmans get to share the honor with their brother, NYS’s second fastest runner at the Federation championships and the first New York State finisher at the Champs Northeast Regional Championship.

A review of the accompanying list of performances by the trio at this year’s litany of meets stands out as a litany of astonishing accomplishments. Simply put, the Furmans collectively and individually model an uncanny unity of purpose, self-discipline, hard work and impeccable character.

Hailing from parents who in their day were champion racers has bestowed great genetics on the trio. Both Chip and Julie Furman were state champions and went on to garner more glory in college. So, it comes as no surprise that they wanted their children to have the opportunity to learn the joys of running and the success and personal satisfaction derived therein.

Van noted that his first running experience came in first grade at the Grahamsville Gallop. Both Adam and Anna had the same start.

Adam notes, “I knew I was going to run since first grade but there was nothing formal until seventh grade. In the interim I played soccer.”

First Van and then Anna followed a similar path. Adam served as a great role model for both. Van, who is now a sophomore, has consciously set out to beat Adam’s tenth grade times. His improvement from a year ago is nothing short of astounding. He finished second at the Burnt Hill Invitational and an amazing fourth at the OCIAA Championships. Van was also second in the Section IX win and second in the state meet.

For her part, Anna, an eighth grader is only in her second year of competition. She is already the Section IX Class D champion, finished second at the Suffern Invitational, fifth at the Manhattan Invitational, third at Burnt Hills and the OCIAA Championship and second at the state meet. Her last feat of the season was a first among 13 to 14-year-olds at the Champs Northeast Regional Championships.

Adam will be running at college. In a matter of a few weeks, he will announce his decision as to where he will be going. Van has two more years of varsity and Anna has four. Asked what they love most about running, Van quickly replied: “The feeling of knowing you’ve done something really well.”

To Anna, running is ‘fun.’ She adds, “It can be hard, but I love the different courses and gaining more experience.”

Adam, who is in possession of a treasure trove of trophies, plaques and medals adds, “Winning is very important. I need to know that I’ve gotten something out of it after all the hard work.”

Asked to assess his Cross-Country season, he offered, “I think I did an amazing job this fall, even better than I expected.”

The most euphoric moment? “The OCIAA,” he quickly responded.

All three will run indoor and outdoor track, but Cross-Country is their unanimous favorite of the three running seasons.

Adam says he will miss running with his T-V teammates and the feeling of high school competition.

“We knew each other so well. To some people, what we did doesn’t seem that big of a deal, but it was really amazing. Really though, we’re nothing special.”

The entire running program at Tri-Valley is quite special indeed overseen by Chip Furman and his assistants Tyler Eckhoff and Skylar Musa Eckhoff.

How hard do these kids train? Monday: “normal” distance of ten miles. Tuesday: 400- and 800-meter intervals. For Anna the mileage is lower. Coaches and parents fully understand the danger of burning out a young runner. Wednesday: tapering down to eight miles. Thursday: Two miles at race pace then rest and repeat. Friday depends on whether there is a race on Saturday. If so, three or four miles. If not, then 10 miles. Saturday is a race day or a long run and on Sunday they rest.

Future plans for the two younger runners are indistinct. Van dreams of aviation and perhaps attending the Air Force Academy. Anna’s future plans for now are running for Tri-Valley.

The role of Chip and Julie Furman cannot be understated. As Adam notes, “They knew where we would succeed, and they knew what would be best for us. And they were right.”

Congratulations to three extraordinary athletes. Humble and soft-spoken, they let their actions speak for them. They are truly wonderful young people and great role models as well as a great source of pride to their family, the school, community, Section IX and the sport itself.

Anna did not compete