When you think of the Woodstock Music & Art Fair what comes to mind? The half a million sitting on a field in Bethel? The torrential downpour? The Music? Chances are all three. 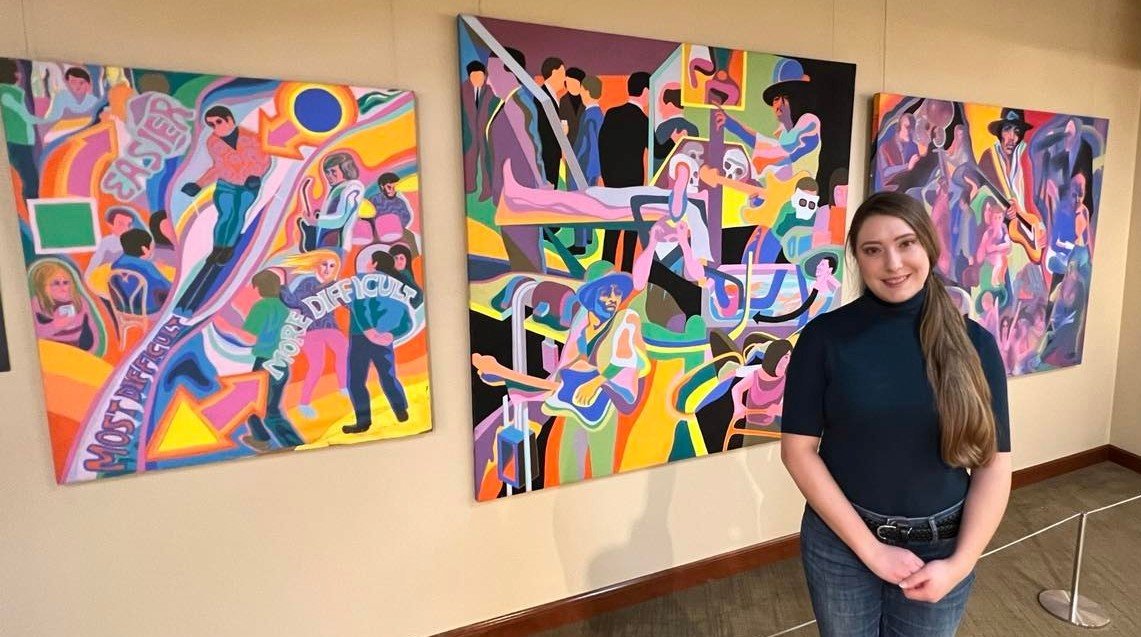 Julia Fell, Curator of Exhibits at The Museum at Bethel Woods stands before paintings by Julie Lomoe, who showed off her art work at the 1969 Woodstock Music & Art Fair.
Contributed photo
Posted Friday, April 1, 2022 7:00 am
Barry Lewis

When you think of the Woodstock Music & Art Fair what comes to mind? The half a million sitting on a field in Bethel? The torrential downpour? The Music? Chances are all three.

Bet you can rattle off a list of the performers, the guy who came up with the idea and probably name the man on whose field the historic three-day event in the summer of ’69 was held. Yet seemingly lost in the history of Woodstock is the art aspect of Woodstock.

“Not until now – but it’s there,” boasts Julia Fell, Curator of Exhibits at The Museum at Beth Woods, just days before the April 1 opening of its 2022 special exhibit, “& Art Fair” which takes a look into elements of Woodstock that don’t often take center stage.

“It was the Woodstock Music & Art, right? It has the ampersandbecause art was given equal billing in the title. But because the music ends up being so legendary the art often times gets to be forgotten. There are so many aspects of the art that we’re exploring in this exhibit, from art that advertises the festival to attract people to come to art that deals with the planning of the site, including design models and maps that are works of art within themselves, says Fell.

The Woodstock Music & Art Fair actually invited artists from the general public to bring their work to the site for it to be displayed. Newspaper ads promoting the event said there was $2,400 (that’s over $18,500 today) in prizes for the artists who would also be given free admission to the event. The plan was for the bulk of the artwork to be set up and viewed by the few thousand folks who would enter the festival in an orderly manner after passing through the main gate and ticket booths, located not far from the Hog Farm encampment by the woods off West Shore Road across from the festival field. What do they say about the best laid plans?

As we all know, an unexpected hundreds of thousands of people descended on Hurd Road off 17B and West Shore, opposite from the intended entrance. It’s among many reasons Fell explains why most attendees didn’t see the art or were unaware that there even was art on display. “And people who stayed on the field for those three days they never got to go over to that site. Another reason was because of the weather conditions that kept the art from being displayed.”

Many artists did attend and were able to show their work and actually compete in the contest.

Part of the new museum exhibit shows pieces by Ira “Panjo” Wollen who won a blue ribbon for his paintings and sculptures. There are also paintings by Julie Lomoe, who Fell first met at a conference celebrating the 50th anniversary of Woodstock back in 2019. She had two done before Woodstock and was part of the competition. Lomoe brought them up in a van and took second place.

Fell moves quickly through the exhibitions, pointing out items that came from folks via the museum’s oral history project that was part of the 50th anniversary. “There was a lot of electricity from the 50th, people poured out of the woodwork to celebrate that anniversary so we were able to make a lot of new connections to reframe the direction that we’re going in as a museum to preserve the legacy of Woodstock in the words and artifacts of people who were there.”

So much of the mystique about Woodstock is tied to the spontaneity of what took place. While artists were invited to show their work some attendees felt the need to create in real time.

Fell says visitors will experience such an example by an artist named Buddy Kruck. “He was in graduate school at the time and at 22 years old comes to the festival with his sketchbook in hand and creates a series of drawings of what he sees there in the field. So as you’re walking into our exhibit you’re walking through the festival field through his eyes.”

Kruck included the words: “While drawing I was absorbed in the process of capturing the beauty of the scene before me. The afternoon sky was a light peach color which illuminated the tall grass and spectators with a soft glow. While we listened to Ritchie Havens sing ‘Freedom,’ we were all warm, dry, and filled with anticipation.”

The Museum at Bethel Woods exhibit: & Art Fair runs through December 31. For information go to www.BethelWoodsCenter.org