When it comes to combating the opioid crisis in our communities, as the old saying goes, it takes a village. In an effort to highlight the work of various pillars within the Sullivan County Drug Task … 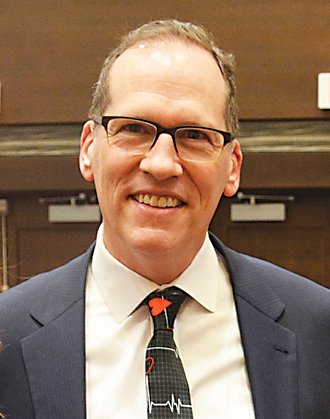 When it comes to combating the opioid crisis in our communities, as the old saying goes, it takes a village. In an effort to highlight the work of various pillars within the Sullivan County Drug Task Force, this series will profile individuals, organizations, institutions, etc. working to make things better. The Sullivan County Democrat recently spoke with Garnet Health Medical Center - Catskills CEO Jonathan Schiller on the role the hospital has taken in the effort.

“For physicians and nurse practitioners to carry a patient load, if you will, for medication assisted treatment, primarily buprenorphine, they have to have a DEA X waiver for their license,” said Schiller. “We, through Dr. Batson, have been able to coordinate a few of those training sessions.”

Schiller also mentioned the new Bridge Back to Life Center Mobile Treatment Unit, which is bringing medical care to some of the most rural areas of the county, noting that the pillar is working on the best ways to get referrals for them.

The hospital, along with task force pillar partners have helped bring the NY Matters Program to life locally. Schiller praised NY Matters, calling it a “fantastic way to keep all of the providers connected.”

Another area the hospital has been helpful in is the collection of valuable information.

Schiller explained that the task force and the Sullivan County Department of Public Health were seeking data and the hospital is in a position to provide it.

Furthermore, the task force meetings offer an organized forum in which to discuss the findings.

For example, last month Schiller reported to peers that in 2021 the hospital saw 381 unique patients in their emergency department who had some type of a substance use disorder that they could identify, according to Schiller. This could include opiates, alcohol or some other substance.

Of those 381 patients, 35 agreed to suboxone or a buprenorphine induction. So roughly 10 percent. Schiller added that 31 agreed to walking out with Narcan or naloxone, and four agreed to program referral. Schiller also reports that in the hospital’s behavioral health unit, about 80 percent of patients they see have some type of co-occurring mental health and substance use disorder.

At the front door

Aside from their work with the task force, Garnet Health Medical Center - Catskills has the ability to take care of someone who is in an overdose or withdrawal situation in their emergency department, explained Schiller. Treatment includes the use of prescription medications and some social work. From there, Schiller said there are basically two different avenues a patient can take.

The first is if they desire to receive treatment, the hospital can get them into the NY Matters Program, make a hot referral to a local outpatient provider, get them started on Suboxone for medication assisted treatment, and get them into somebody's hands who can do the follow up.

The other scenario is if they’re in an acute state of illness, presenting with several other health issues. For those patients, the hospital will admit them.

We do have the ability to do detox and initiate treatment for when they're in an inpatient status with us,” said Schiller, “and then they would kind of get back on the road with the other patients and get the outpatient referral as part of their discharge.”

Garnet Health Medical Center - Catskills can also transfer patients to UHS Delaware Valley Hospital in Walton where there are a number of beds dedicated to an inpatient substance use disorder treatment program.

Schiller said Garnet Health Medical Center - Catskills recognizes the core of the hospital-based services they provide, they do very well.

“Opening up a drug treatment facility is not the core of what we do,” said Schiller. “But we have that space available and we want it to be used for good. So we are in exploratory talks with a private group that runs these types of facilities.”

The space he is referring to is the third floor which previously housed the Skilled Nursing Unit.

Whether or not an arrangement can be reached is yet to be determined.

“There’s a lot of questions, answers, concerns, issues and ideas to try and run a service within a hospital. [It’s] not the most easy thing to do. But we have the space and I think where there’s a will there’s a way, we just have to figure out if we can make the numbers work for them and for us.”

When asked if he had any further thoughts on the opioid crisis, Schiller had a message for members of the public: “Please support friends, families, neighbors who may be in need of help and don't be afraid to get them help.”

To those trying to overcome addiction, Schiller said, “If today's their first day of sobriety, come to the hospital and we’ll help.”