ELDRED - Winning basketball games is about successfully deploying one’s assets while denying opponents the effective use of theirs. That formula provided the 5-2 Sullivan West Lady Bulldogs … 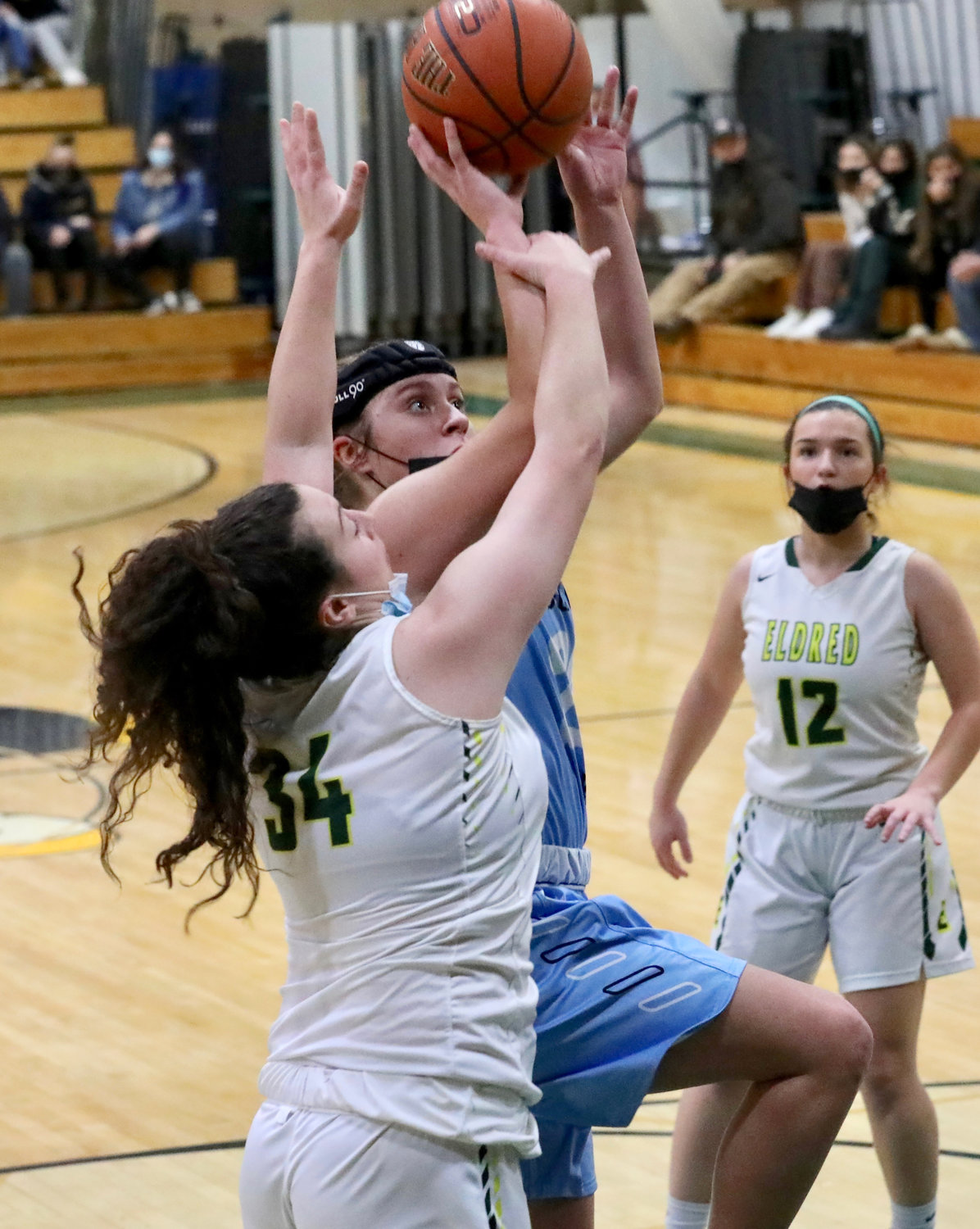 Sullivan West’s Riley Ernst goes up for a shot and is fouled by Eldred’s Lilly Gonzalez. Ernst led the Bulldogs with 16 points on the night.
Richard A. Ross | Democrat
Posted Friday, January 21, 2022 6:30 am
Richard A. Ross

ELDRED - Winning basketball games is about successfully deploying one’s assets while denying opponents the effective use of theirs. That formula provided the 5-2 Sullivan West Lady Bulldogs with all the moxie they needed to cruise by Eldred 46-27 in a non-league fray. The defeat was a letdown following Eldred’s uplifting win over Seward. Eldred also posted a victory over Chapel Field under the watchful eye of new coach and former Eldred hoops standout Jordan Lepes. The Lady Yellowjackets are now 2-3 on the season.

The Lady Westies used prominent post play from Taylor Wall and Riley Ernst to dominate the glass on the offensive end. That led to put backs and foul shooting attempts. On the other end of the floor, Coach Pat Donovan’s mélange of defenses thwarted Eldred. The Lady Yellowjackets frequently turned the ball over due to the intense pressure of the Lady Bulldogs’ helping defense. Trying to get the ball down low to forward Lily Gonzalez seemed inordinately difficult, and when Gonzalez did get the ball, the bigs in the paint made scoring extremely difficult.

Sullivan West pressured the ball handlers resulting in poor percentage shooting and turnovers. Eldred was mostly one and done with their shots, which sent the Lady Dawgs back on the offense yet again. Both teams struggled in the early going with Sullivan West taking an 8-6 lead by the end of the first quarter. But in the second stanza, the Lady Westies got into gear and outscored Eldred 14-4 to take a 22-10 lead into the half.

That scoring disparity continued in the third quarter as SW outpaced Eldred 14-7 to increase the lead to 36-17 after three quarters. Ernst and Wall accounted for 31 points between them as the former posted 16 and the latter 15. Brielle Arnott scored five. Sullivan West was five-for-10 from the stripe (50%).

Coach Pat Donovan said, “We were very active defensively. We rebounded well and kept them off the glass.”

Eldred traveled to O’Neill for their next fray while the Sullivan West girls hosted Livingston Manor.