DELAWARE — The Town Planning Board of Delaware held a public hearing prior to their regular meeting Wednesday, November 17, in which Kevin Wall of Reilly Engineering presented an updated … 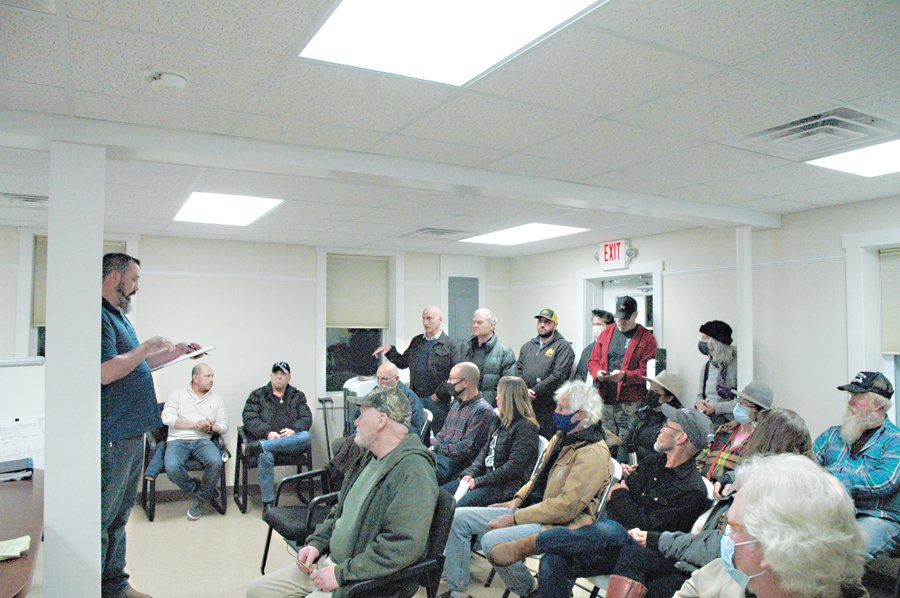 A crowd gathered in Hortonville for the public hearing with inquiries and concerns about the proposed development located in the Beechwoods section of the township of Delaware.
Derek Kirk | Democrat
Posted Tuesday, November 23, 2021 6:28 am
By Derek Kirk

DELAWARE — The Town Planning Board of Delaware held a public hearing prior to their regular meeting Wednesday, November 17, in which Kevin Wall of Reilly Engineering presented an updated proposal of the 60.3 acre development planned for the corner of Gabel and Lux road in the Beechwoods section of the township.

The crowd of around 25 people had gathered into the small room, shoulder to shoulder as the public hearing took place. After the meeting was opened and public hearing started by the Planning Board, members of the public rose to speak before the Board and Wall about the details of the proposal.

The concerns and questions varied, pertaining to concerns about the environment and water run-off, water and sewage usage, the monetary funding for the development and the safety concerns over the proposed driveway locations that would connect with the road.

After the public was given the chance to speak, the floor was turned over to Wall, of Reilly Engineering, who answered each question in turn and described the updated plans for the development.

“It is 60 acres total subdivided into nine lots and it’s going to include the farm lot,” Wall explained.

“Septic and soil tests are all completed, the next step we’re looking for is going to the engineering, and the submission to the town engineer and the health department,” Wall continued.

As for the concerns addressed by the attendees, Wall answered each question.

“A SWPPP [Stormwater Pollution Prevention Plan] is being prepared,” Wall said. “Any drainage will go to a collection area before it is reintroduced back into the stream or back into the environment.”

Wall then spoke on the safety concerns for the driveway placements.

“We actually placed these driveways in specific locations because they were the best spots for sight distance,” he said.

As for the funding of the project, the question was addressed by Wall and the Board, saying that it is funded by private means.

No official action has yet been taken on the proposed development as the Board awaits the SWPPP to be completed.