MONTICELLO — A public hearing was held at the Government Center in Monticello on Tuesday morning regarding the sale of the Adult Care Center in Liberty to a private company. 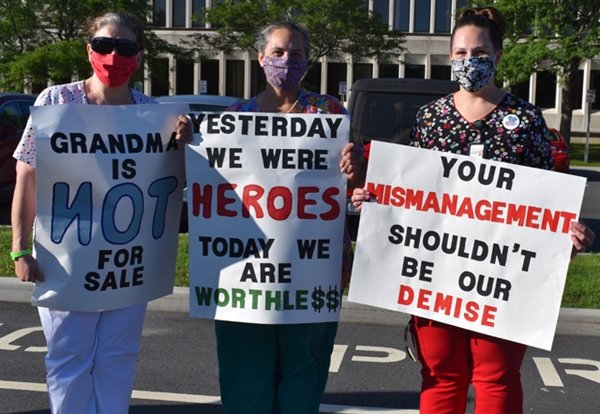 Angela Musso, an LPN at the Adult Care Center, and her two daughters, Ashley and Amy Musso, who are both nurses' aides, have worked at the Center for many years. They attended a protest outside of the Government Center in Monticello on Tuesday morning to oppose the sale of the nursing home to a private entity.
ISABEL BRAVERMAN | DEMOCRAT
Posted Thursday, July 16, 2020 12:00 am
Isabel Braverman - Staff Writer

MONTICELLO — A public hearing was held at the Government Center in Monticello on Tuesday morning regarding the sale of the Adult Care Center in Liberty to a private company.

If approved, the legislature would transfer the Care Center to a Local Development Corporation (LDC) which would find a private buyer.

A group of concerned residents, Care Center employees, family members of residents at the Care Center, and others spoke out about the proposed sale.

Citing various concerns, they spoke during the public hearing, which was only supposed to be 30 minutes but was extended to one hour.

There were still so many people on the list who wished to speak that legislators recessed the public hearing until Thursday (yesterday) at 3 p.m., at which time they were expected to vote. As this was after presstime, we will continue to update the story.

The county cites fiscal concerns because of the COVID-19 pandemic as to why the sale is being proposed.

According to a statement from the county, “Given the financial realities, the long-term viability of the Care Center is threatened. The county recognizes how vital these services are to our elderly population and their families and, after deliberation and reflection, legislators have determined that a sale is the best way to insure the continued operation of the facility.”

The public hearing was emotionally charged, with people speaking about their personal experiences with having family members in the Care Center.

One of the issues people spoke about was the worry that moving to a privatized company would result in a degradation of quality.

Legislator Luis Alvarez said his wife has been a resident there for two and a half years after she had a brain aneurism.

He said his wife receives quality care and that he would vote no on the proposed sale.

“For a government like us to forget our primary mission, which is to take care of those that cannot take care of themselves, [is wrong]” Alvarez remarked.

Dr. Paul Salzberg, who has served as Medical Director at the Care Center for over ten years, urged legislators to reconsider the sale.

Assemblywoman Aileen Gunther attended a protest outside the Government Center before the public hearing took place.

She said as a veteran nurse she could not support the sale of the Care Center.

“It's so important that we have people serving our senior population. They're the greatest generation, and we cannot turn our backs on them,” Gunther said.

New York State Senator Jen Metzger said she understands the financial constraints the county faces, but worries about the sale.

“I am extremely concerned about the impacts that the sale of the Care Center at Sunset Lake could have on the quality of care residents receive, as well as on the county employees who care for them,” Metzger said in a statement. “We have seen too many examples of nursing homes cutting costs at the expense of residents' care once they've been privatized.”

Care Center staff member Eileen McDonald said she's worked there since 1987 and urged legislators not to go through with the sale.

“What happens to my years that I put into the county, you're going to pull it from underneath me?” she asked. “If that's the case, give me back what I put into the system right here, right now. That is not fair to me and my family. I'm a taxpayer just like everyone else here.”

Other employees, who did not get a chance to speak at the public hearing, attended the protest prior to the meeting and said they also oppose the sale.