NEVADA – Sean Flynn recently was recognized for his life-saving efforts on Mother’s Day, 2020, by the U.S. Coast Guard.

Flynn, a 1997 graduate of Delaware Valley Central School and … 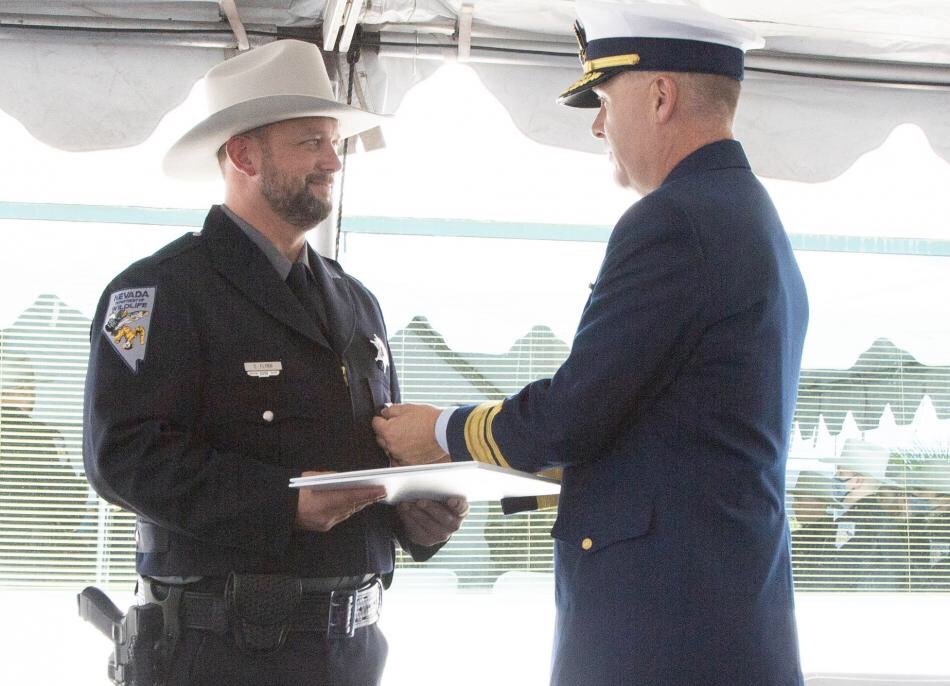 NEVADA – Sean Flynn recently was recognized for his life-saving efforts on Mother’s Day, 2020, by the U.S. Coast Guard.

Flynn, a 1997 graduate of Delaware Valley Central School and Callicoon native, is the son of Lin and Bob Flynn, who now reside in Sanford, NC.

Sean was recently presented the prestigious Silver Lifesaving Medal by Coast Guard Rear Admiral Brian Penoyer for “rescue, or endeavor to rescue, any other person from drowning, shipwreck or other peril of water.”

Flynn and his family now live in Las Vegas, and he is now a game warden with the Nevada Dept. of Wildlife.

As Nevada Department of Wildlife (NDOW) Game Warden Sean Flynn arrived on the scene of a capsized boat on Lake Mead on Mother’s Day of last year, he saw fellow game wardens Thomas Hamblin and Casey Humphries near the shoreline with the capsized boat that was now partially submerged.

Hamblin and Humphries, the first to arrive on the scene, had just pulled multiple people from the water and were now coordinating with other wardens and National Park Service Rangers to search for a missing 3-year-old girl who was believed to be stuck under the boat.

It was dusk and the boat was sinking. Time was running out.

“I remember thinking that it was Mother’s Day, and the missing girl was about the same age as my son,” said Flynn. “Her grandfather was standing there with a flashlight looking for his granddaughter. I knew I needed to get under the boat fast.”

Flynn, an Air Force veteran with several years’ experience in search and rescue, was selected to swim under the boat and attempt to locate and rescue the little girl.

NDOW wardens and Park Service rangers stabilized the boat as best they could, as Flynn swam under the boat, maneuvering through the dark and debris filled water until he located the girl, scared but alive in an air pocket of the capsized boat.

He pulled her to the surface cold and afraid, but unharmed.