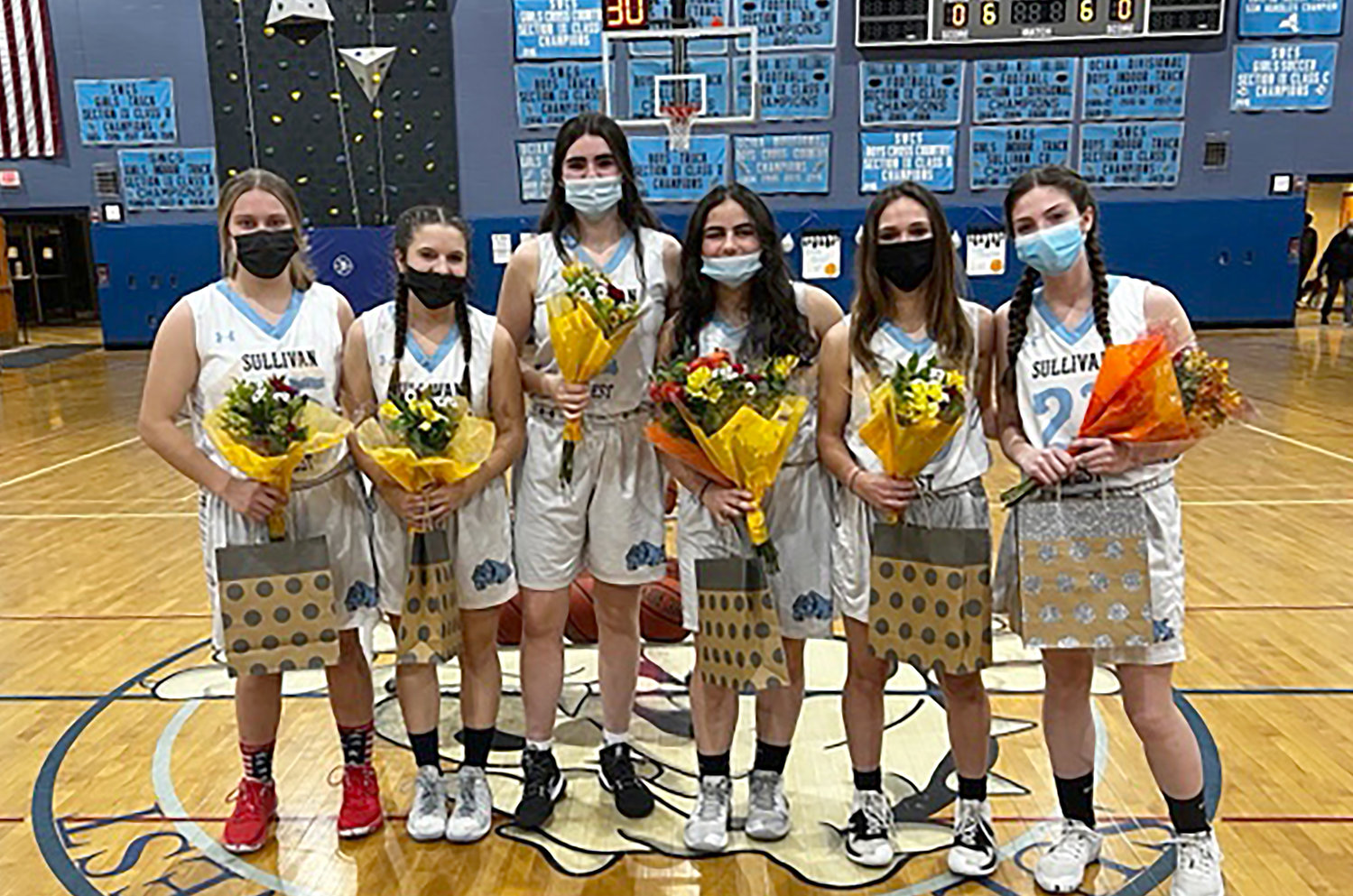 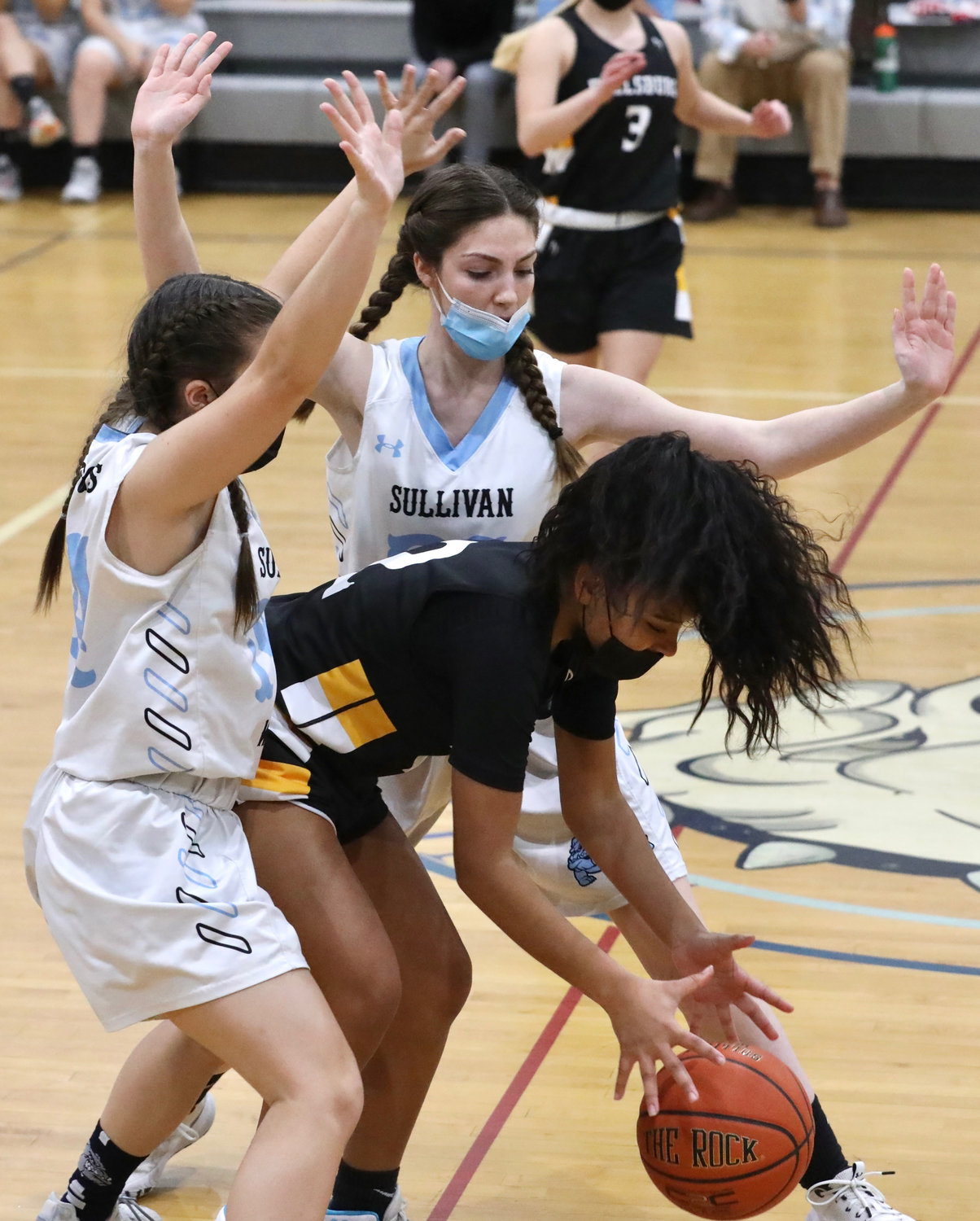 Stifling defense from SW’s Brielle Arnott and Taylor Brustman frustrate Fallsburg’s Ashley Grande as she tries to maneuver the ball up the floor.
Richard A. Ross | Democrat 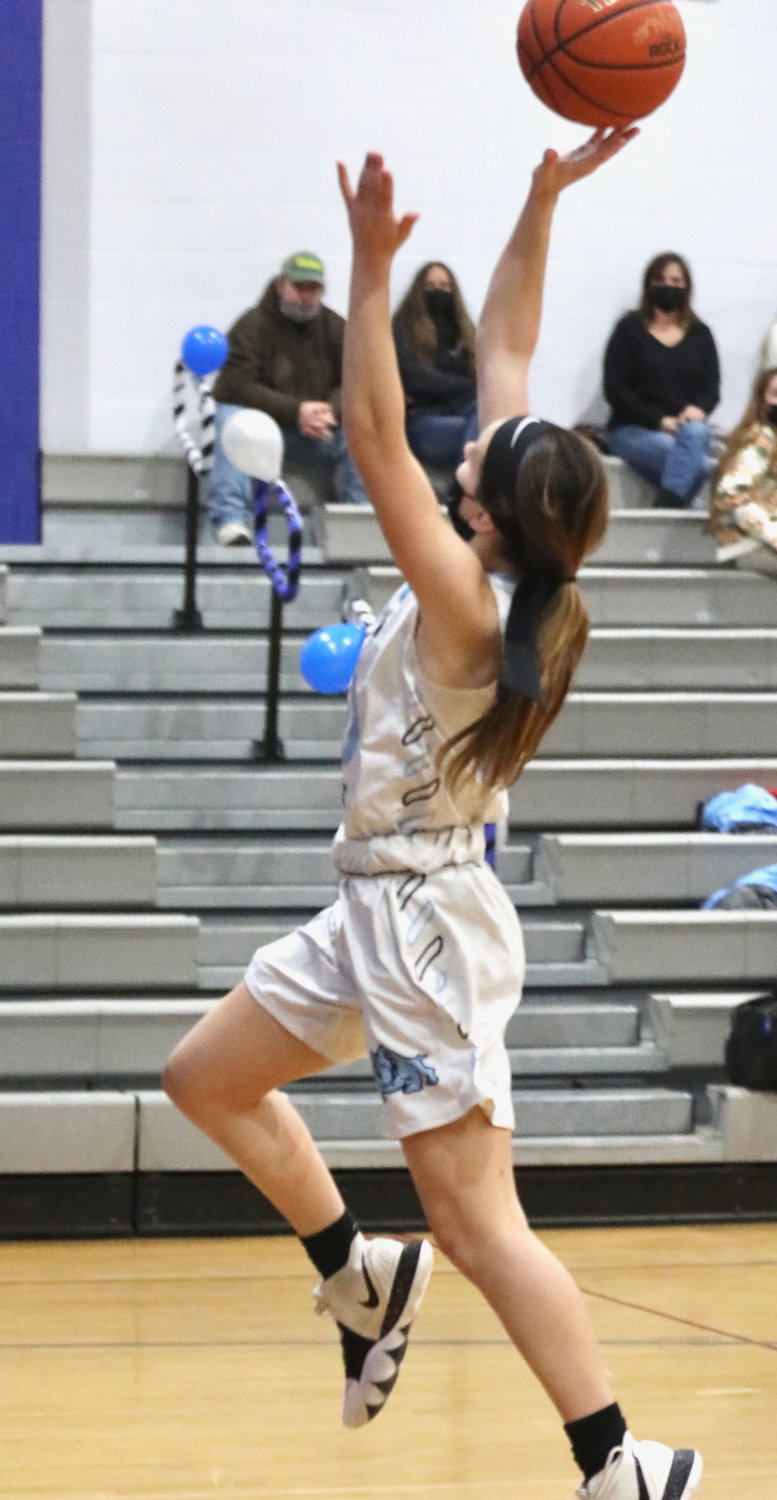 With deft fingertip control, Sullivan West senior Grace Boyd floats a breakaway layup. She had eight points in the win.
Richard A. Ross | Democrat
Previous Next
Posted Tuesday, January 25, 2022 6:20 am
Richard A. Ross

LAKE HUNTINGTON - In keeping with the Sullivan West boys basketball team’s sweep week racking up three wins against Chapel Field, Eldred and Livingston Manor, the girls team matched that dominance with a trio of victories of their own. After handily beating Eldred and Livingston Manor, the Lady Westies used the occasion of their Senior Night to effect a lopsided win over the Fallsburg Lady Comets to the tune of 66-22. The evening began with the honoring of seniors Riley Ernst, Taylor Wall, Brielle Arnott, Grace Boyd, Mia Nunnari and Taylor Brustman as family members came down onto the court to receive flowers and pose for photos that years hence will bring back wistful memories of these halcyon days.

Fallsburg Coach Michael Ballard was glad to finally have all ten of his girls on hand, something that hadn’t happened thus far due to Covid quarantine absences. His team is young with two sophomore starters. No doubt the lack of playing time as a unit plus their youth were factors in the SW landslide. The Lady Westies make no mystery of their two most salient weapons in their multifarious arsenal: Great inside play from their bigs and intense defensive pressure manifested in a variety of defensive alignments to suit the occasion. With barking commands from coach Pat Donovan, the team can rapidly shift into a 3-2, a 2-3, a helping man or a box and one array.

Taylor Wall and Riley Ernst continued to do what they do best, penetrating the paint and piling up points with deft moves under the basket. Each posted 18 points in the victory. The defense held the struggling Lady Comets to a paltry 12 points over the first three quarters allowing only three and two point outputs over the second and third stanzas respectively. Fallsburg tried to press Sullivan West, but the Lady Dawgs have had their share of other teams attempting the same strategy.

Needless to say, the press was hardly impressive as the ball got over the top and reached the waiting tall trees who scored easily. Sullivan West led 16-7 in the first quarter but then outscored Fallsburg 19-3 in the second frame to take a 35-10 lead into the break. The third quarter was even more unbalanced with the Lady Westies pouring on 20 to Fallsburg’s two. The Lady Comets did get good production from Ashley Grande who scored 18 of the Comets’ eventual 22 points on the night. Fallsburg was two-for-four from the stripe (50%), while Sullivan West was three-for-six.

Coach Donovan was upbeat in his postgame comments: “Hats off to Fallsburg. They played hard the entire game from the first whistle to the last. Mike is doing a great job with those girls. Our defense was pretty solid last night and our communication on defense was great,” he said.

“Offensively we executed pretty well. Everyone contributed last night. Everyone scored and contributed whether it was a key rebound, steal or deflection. It was great to see that from all of the girls and to honor the seniors was great as well. We haven't had senior night in a couple of years, so it was great to have that happen.”

Fallsburg travels to Tri-Valley on January 28, the same night Sullivan West hosts Monticello. The Lady Comets fell to 1-6 with their only win coming against Livingston Manor. Sullivan West improved to 6-2. For both teams, the week after next will be populated by key league matchups.