It was April 24, 1966, and Sullivan County’s Golden Age of tourism was beginning to perceptibly slip away when the New York Times ran an article with a Fallsburg dateline about an incongruous … 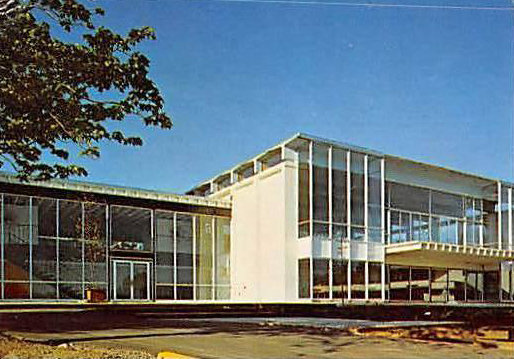 The theater at the Olympic Hotel in Fallsburg.
Contributed Photo
Posted Friday, April 29, 2022 8:16 am
John Conway

It was April 24, 1966, and Sullivan County’s Golden Age of tourism was beginning to perceptibly slip away when the New York Times ran an article with a Fallsburg dateline about an incongruous event at one of the hotels that didn’t seem to quite fit the “Borscht Belt” image.
Even then, there was a tendency to think of the entertainment at the Sullivan County hotels strictly in terms of comedy, but while the influence of the so-called Borscht Belt on American comedy cannot be overstated, there was more being offered at the region’s 538 hotels than stand-up comedians.
A lot more.
Still, the entertainment offered up at the Olympic Hotel in Fallsburg in April and May of 1966 was somewhat unusual, particularly by Sullivan County standards. Perhaps as much an indication that the county’s Golden Age was ending as anything, the Olympic that spring staged the first ever Catskill Mountain Shakespeare Festival.
The Shakespeare Festival was the brainchild of Bruce Joshua Samborn, who served as Executive Producer. Milton Kutsher and Ben Kaplan, Executive Director of the Sullivan County Hotel Association were members of the Festival’s honorary advisory committee. Dr. Richard Greenfield, Dr. Dale Lake, and Dr. Robert Novak, presidents of Sullivan, Ulster and Orange County Community Colleges, respectively, were among the supporters. And with the advance sale of 15,000 tickets, the new fangled concept proved to be much more than a publicity stunt. In fact, because of the unexpected demand for tickets, the hotel added six extra days to the original schedule, offering a total of 40 performances ending late in May.
Of course, not everyone was willing to forsake traditional Catskills entertainment to swarm to the Olympic for the performances of the Bard, as Dinah Shore drew her usual large crowds at the Concord and Jackie Mason, George Kirby and Norm Crosby packed them in at Grossinger’s during the Festival’s run. Nonetheless, the Olympic made out quite well with the unconventional idea.
A 25-member repertory company staged three of Shakespeare’s best known works: “Hamlet,” “Macbeth,” and “A Midsummer Night’s Dream,” with performances at 10:30 a.m. and 2:30 p.m. on weekdays, mostly for school groups—some from as far away as Albany and Glens Falls and Bucks County, Pennsylvania-- and at 8:30 p.m. on Friday evening and 2:30 p.m. and 8:30 p.m. on Saturdays. Ticket prices ranged from $1.75 each for students at the daytime performances, to $3.50 for the best seat at an evening performance.
“Until now, Shakespeare has not been the Catskills cup of tea although the summer theater group in up-county Forestburgh gives him a short run every year, and he is studied, of course, in the local schools,” reporter Michael Strauss wrote in the Times, obviously unaware that the world famous tragedian Frederick Warde, who had portrayed Richard III and King Lear on both stage and screen, had made Sullivan County his summer home from the 1880s until his death in 1935, conducting “an institute of oratory, expression and dramatic arts” he called Wardesden, for many years at North White Lake.
Strauss noted that the Olympic’s “Elizabethan Theatre” in which the performances were staged was better known to regular hotel guests as the Cloud 9 lounge. And although a major overhaul was necessary to make the transition, it was apparently accomplished without too much trouble.
“One obstacle hurdled with a minimum of difficulty has been the physical creation of the theater,” he wrote. “Under the guidance of Mr. Samborn, a Monticello attorney, Robert Rosenberg, owner of the Olympic Hotel, and Alexander Maisel, managing director of the Forestburgh Summer Theater, ‘Cloud 9’ has been converted into a 500 seat theater re-creating the flavor of the London theatres of the Elizabethan period.
“The repertory group consists of 25 members. They are drawn from such groups as the Provincetown Repertory Company, the American Shakespeare Festival of Stratford, Connecticut, the Antioch Shakespeare Festival, the Great Lakes Shakespeare Festival and the New York Shakespeare Festival.”
Well-known Shakespearean actor DeVeren Bookwalter, who had performed in “Macbeth,” “Taming of the Shrew,” and “Romeo and Juliet” in Stratford, was brought in to portray Hamlet at the Olympic. Jane Altman, a Forestburgh Theater veteran who also regularly appeared at Manhattan’s Provincetown Playhouse, played Hamlet’s mother, Queen Gertrude, as well as Lady Macbeth.
Strauss wrote that although the inaugural Catskill Mountain Shakespeare Festival was such a huge success that organizers were already discussing the possibility of an even more ambitious eight-week event for the following year, no one was getting too excited about the nature of Sullivan County entertainment changing dramatically just yet.
“When the 1966 festival ends, the Olympic Hotel will return to its regular summer entertainment pattern, and the nightclub will again be as Cloud 9-ish as ever.”