LOCH SHELDRAKE - The Paul Gerry Fieldhouse and SUNY Sullivan hosted the Sullivan Tip Off Classic this past weekend after not having basketball at the college for 608 days. The return introduced a … 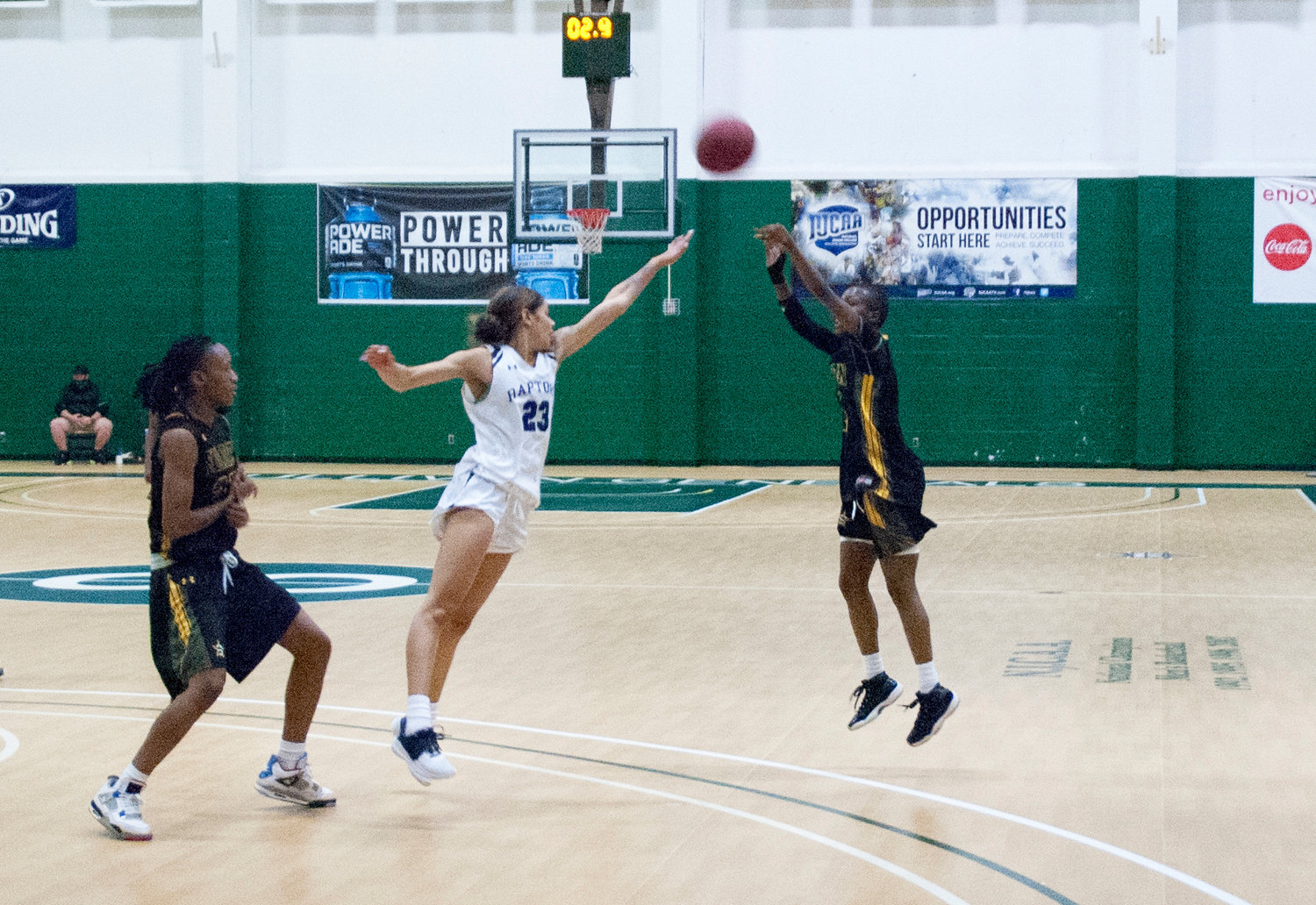 Infinity Hammonds pulls up from the 3-point line as time expires in the first quarter. She scored 15 points in Saturday’s win.
Anthony Morgano | Democrat 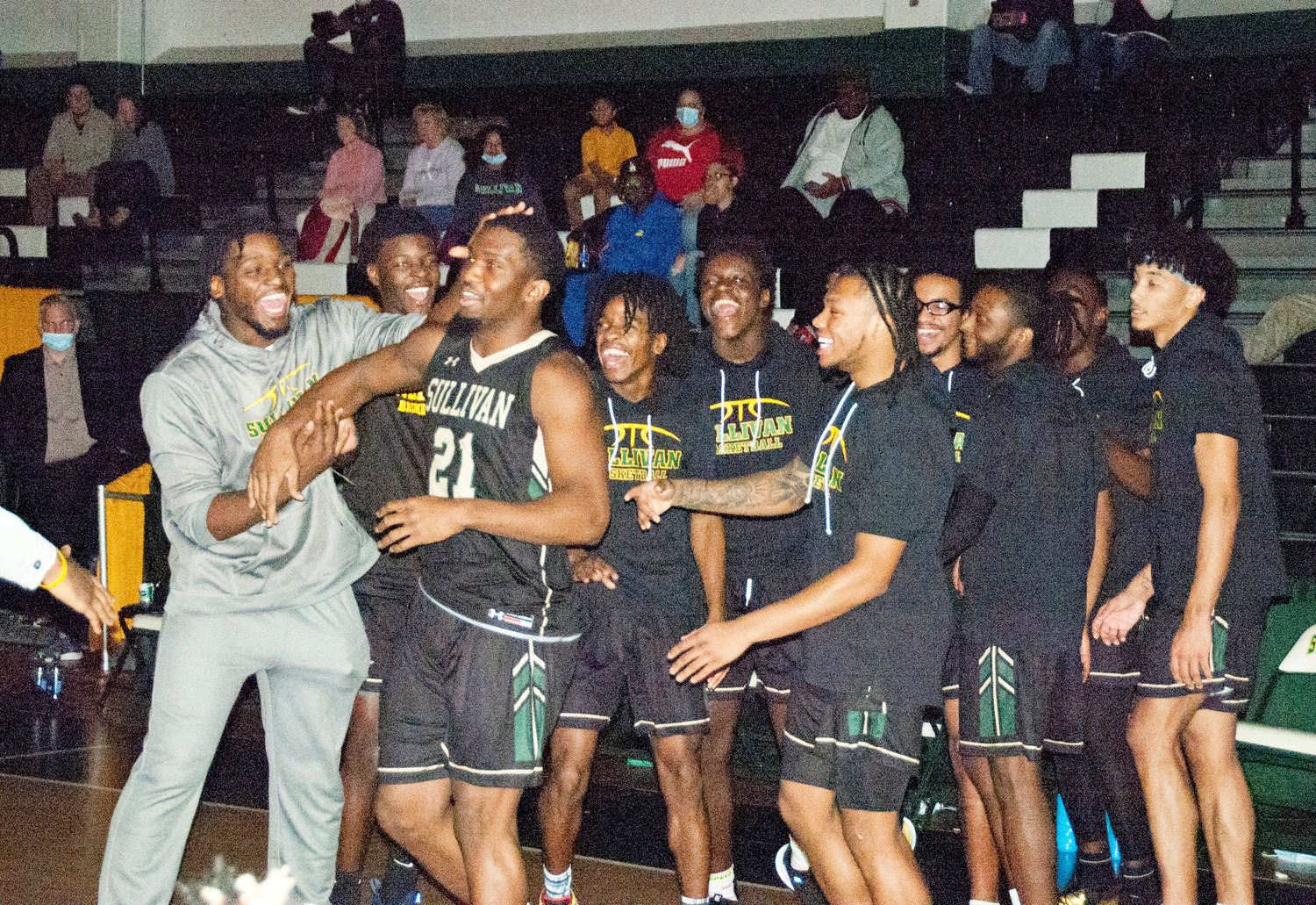 Jarell White (21) is surrounded by the Generals as the announcers call his name before their season opener.
Anthony Morgano | Democrat

Jay Alvarez gets up and slams home a dunk on a fast break. The Generals won their season opener 80-55.
Anthony Morgano | Democrat
Previous Next
Posted Friday, November 12, 2021 6:20 am
Anthony Morgano

LOCH SHELDRAKE - The Paul Gerry Fieldhouse and SUNY Sullivan hosted the Sullivan Tip Off Classic this past weekend after not having basketball at the college for 608 days. The return introduced a lot of new athletes to the Generals team, with the majority of the past players having moved on.

The women’s team also has a new head coach, Monticello alum Ben Newberg. The women’s team kicked off the SUNY Sullivan portion of the weekend, with their 4 p.m. game against Montgomery College. A back and forth battle ensued between the two teams, but the Lady Generals ultimately pulled away with a 70-62 victory.

Deivejon Harris (17) and Infinity Hammonds (15) led the scoring for the women’s team in the first game, combining for 32 of the team’s 70 points.

The boys followed up with a crushing 80-50 win over the Montgomery team. By halftime the Generals had a 22 point lead, and they would increase that throughout the second half as well.

Jarell White (18) and Kareem Welch (13) each put up double-digit points for the men’s team in their first win of the season.

On Sunday, both Generals teams were in action against Raritan Valley Community College. While the ladies team handily defeated Raritan 80-55, the Men’s team suffered their first loss of the early season, a 94-90 defeat.

The energy in the crowd was immense as these athletes, who had waited 87 weeks, finally got the chance to get back out on the court and play in front of their fans.

“It is always a nice feeling to start with a win,” Lady Generals’ coach Ben Newberg said after the game. “Not only is it a win in the first game of the season, but it’s my first win as SUNY Sullivan’s head coach.”

As the seasons begin to change and sports transition indoors, it is important to follow the COVID procedures. At SUNY Sullivan, attendees are required to have a mask on, and when winter sports begin for high schoolers, the situation will most likely be the same. It is important to follow each school’s requirements so that student athletes will be able to continue playing and putting on a show for the fans.