Sometime after 4 o’clock on the afternoon of Friday, June 13, 1913, the fire alarm sounded in the village of Liberty, and by the time firemen responded, a number of buildings were already in … 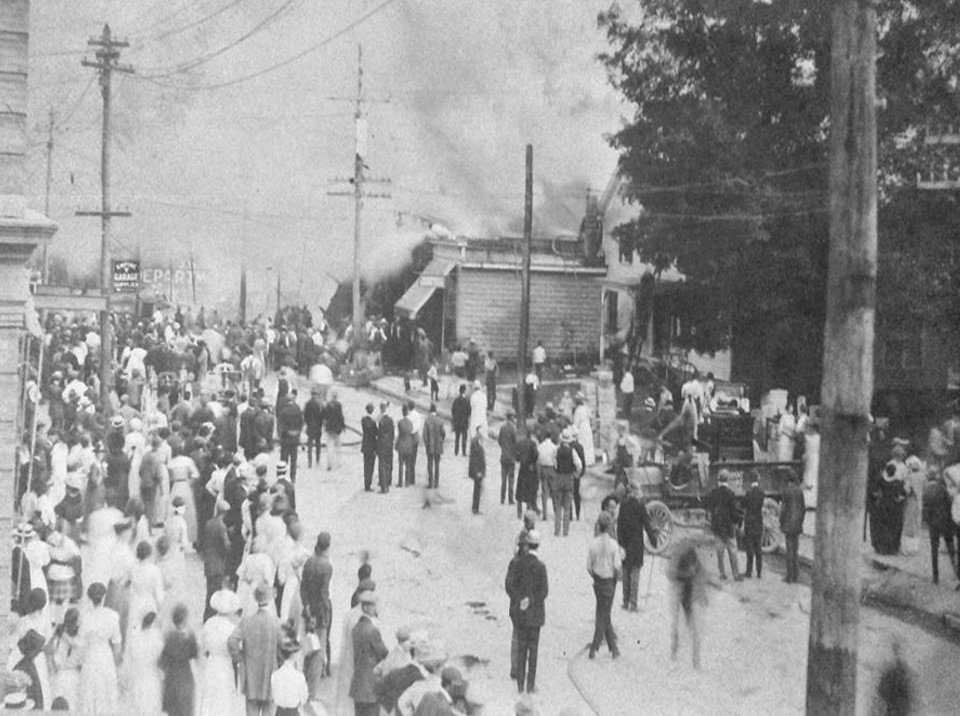 Sometime after 4 o’clock on the afternoon of Friday, June 13, 1913, the fire alarm sounded in the village of Liberty, and by the time firemen responded, a number of buildings were already in flames.

When it was all over some three hours later, the village was in ruins, with estimates of the damage reaching as high as half-a-million dollars. That’s nearly $12.5 million today.

It would become known as the great Liberty fire, one of the most devastating in Sullivan County history.

Although it was never officially established how the Liberty blaze started, it is generally believed to have ignited in the barn located behind the Roosa & Lancashire grocery store.

It is known that shortly before the fire was detected, a man named Thomas Washington had made a delivery of hay to the barn, which served as a storehouse for the grocery, but it is not known if that was in any way connected to the start of the fire.

In a rare special edition, the Liberty Register reported the next day that "with such incredible speed did the flames spread that they had gained uncontrollable headway before the firemen had hooked their hose to the hydrants. The place in which the fire started was thickly surrounded by frame buildings that were easy prey to the flames. The firemen were hardly aware that the fire had started before the flames had raced over the entire block."

Most of those establishments also lost their entire contents. Many other structures suffered varying degrees of damage in the blaze, and for a time, the entire village appeared threatened.

Manville B. Wakefield, writing in his 1970 book, “To The Mountains by Rail,” quotes longtime Liberty resident Dewey Borden’s vivid recollections of the excitement that day.

"‘The fire whistle was just starting to blow,’ recalls Dewey Borden, ‘when I looked up the narrow alley between the Roosa building and the Hasbrouck building to see flames roaring out of the Sherwood stables at the far end.’"

Liberty firemen soon concluded that they were overmatched by the fire. According to Wakefield, "as the flames tore through the 112-foot long Roosa & Lancashire grocery and fruit store, emergency calls went out to surrounding communities, and soon Livingston Manor Hose Co., arriving on a special O and W train, was on the scene, quickly followed by Mountain Hose Co. of Monticello, Jeffersonville Hose Co., and the Lake Huntington Hose Co."

In addition, more than 200 firemen from Middletown were on their way to the scene by train, only to be stopped in Summitville when Liberty officials realized they would likely arrive too late to help.

"When it was apparent that things were out of control, willing hands set to moving merchandise out of Green’s Clothing Store, located in the Music Hall building," Wakefield writes. "‘You never saw a bunch of guys move so fast,’ recalls Borden, ‘as they carried out showcases, racks of clothes and assorted merchandise and piled it up on the lawn across the street in front of the Baptist Church.’

"After sweeping the Hasbrouck block housing the James B. Mance pharmacy and the William Fahrenholz stationery and news store, the advance of the flames up Main Street was finally halted by the concrete-block Hasbrouck’s Liquor Store."

The Baptist Church was almost saved through the heroic efforts of its pastor, Reverend Ralph Thorne. When the towering church steeple caught a spark and burst into flames, low water pressure prevented the firemen from reaching it with their hoses. Rev. Thorne organized a bucket brigade, which had nearly extinguished the fire when the roof caught, and soon the entire building was consumed.

In the aftermath of the fire, word spread that at least one life had been lost, but that rumor proved unfounded. There were injuries, and the human toll would no doubt have been considerably steeper if not for the valiant efforts of the firemen, who risked their lives time and again to rescue those trapped on the upper floors of buildings.

While the Register reported that estimates "from men well qualified to judge" put the property loss at somewhere between $250,000 and $500,000, merchants indicated that their combined insurance policies would cover no more than about $75,000. Nonetheless, all pledged to rebuild quickly, and most did.

Despite the almost inconceivable coincidence, no link between the two fires has ever been established.