It is a legend in this region that during the 17th century, the valleys framed by the Delaware, Mongaup and Neversink Rivers were rich and verdant, and unthreatened by development. Much of this lush … 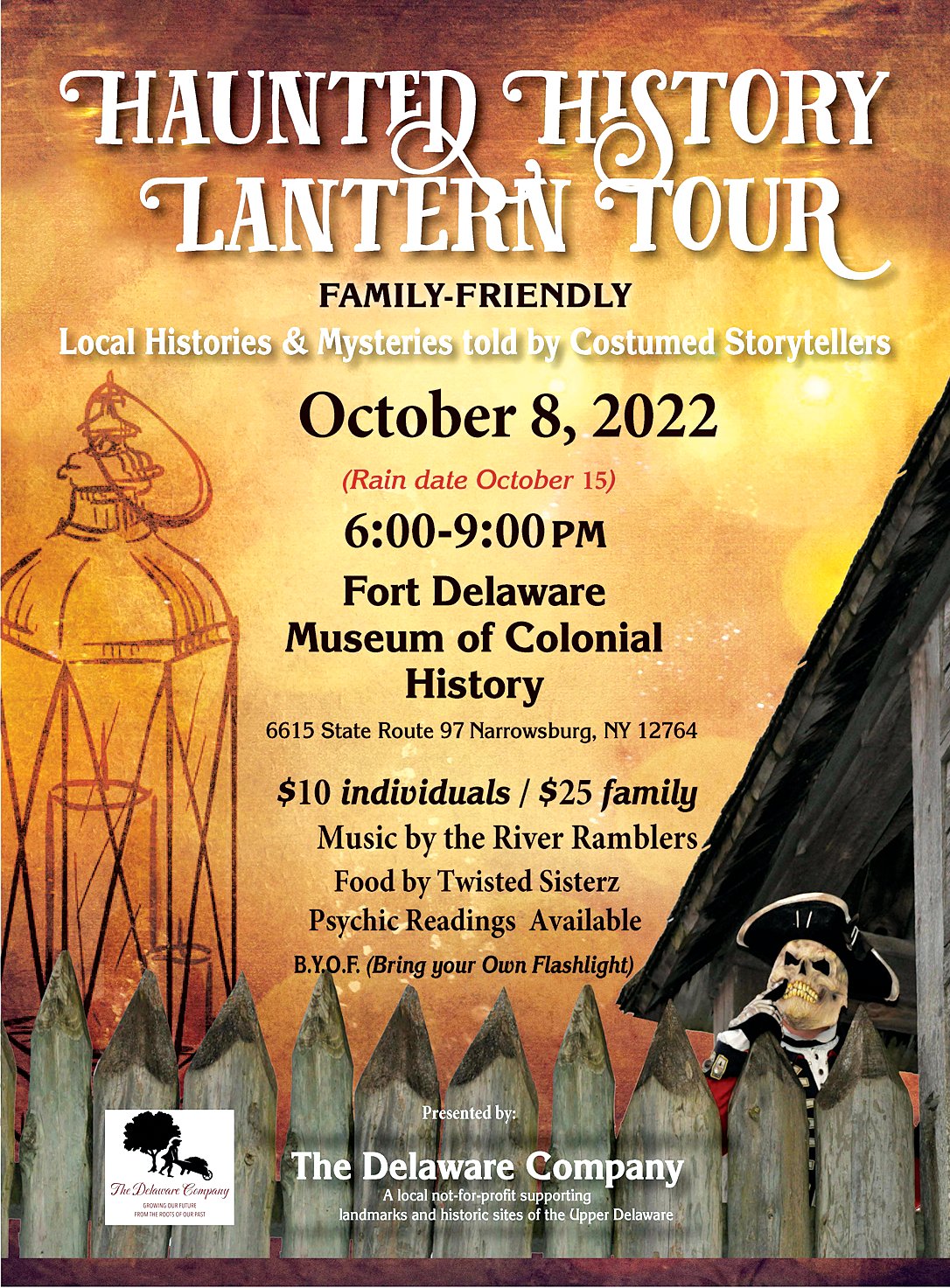 The Haunted History Tour will be held this year at Fort Delaware on Saturday, October 8 from 6-9 p.m.
Contributed Illustration
Posted Friday, September 30, 2022 12:00 am
John Conway

It is a legend in this region that during the 17th century, the valleys framed by the Delaware, Mongaup and Neversink Rivers were rich and verdant, and unthreatened by development. Much of this lush region was roamed by a small group of Native Americans from the Lenape tribe known as the Cahoonshee.

In keeping with their Lenape heritage, the Cahoonshee were great stewards of the environment, and were generally a peaceful people, content to subsist in the paradise the Great Spirit, Kishelemukong, had provided. Before long though, that domain began to slowly and subtly face encroachment. Europeans were moving westward from the Hudson and northward up the Delaware. The Seneca, and other factions of the fierce Iroquois confederacy, long dominant in the Mohawk and Susquehanna valleys, were inexorably expanding their territory southward.

The Cahoonshee chief at that time was a wise man, determined to live in peace, yet painfully aware of the brewing trouble that surrounded his small band of people. He was certain that the future would bring conflict between Indians and Europeans upon his valley, and it was with full knowledge of this impending clash of cultures that he groomed his young son as his successor.

The boy was not much more than seven years old when he was taken prisoner by the British and transported to England. There he was painted in stereotypical Indian style, decked out in feathers and taken around the country for all to see. The British were proud of their success in bringing civilization to the supposed savages of America and this young boy was proof of that success.

His captors eventually decided that the boy should be educated in England and then returned to the New World to serve as an interpreter and missionary in the continuing effort to expand the mighty British empire. He became known simply as Cahoonshee, and he grew to be a giant of a man, roughly seven feet in height and weighing nearly 300 pounds.

At first, he resisted all attempts to Anglicize him, but before long he began to apply himself to his studies, shortly mastering the English language and acquiring a fair knowledge of the arts and sciences of the day. Then the British returned him to his native land, with the understanding that he would remain in their employ and act as their agent and interpreter.

No sooner had his ship landed in Manhattan, though, than Cahoonshee slipped away and began to make his way back to the rivers and mountains of his childhood. It didn’t take long for him to see that the years he had spent abroad had brought great changes to the Upper Delaware. Everywhere he turned, the Lenape wigwam had disappeared, and the white man’s house had taken its place.

Cahoonshee soon learned that his tribe, once rich and powerful, were no more. The last of their braves had been killed by the marauding Salamanca years before, their lodges had rotted, their fields were now covered with briars and thorns. Cahoonshee found an area near the confluence of the Delaware and Neversink rivers where skulls and bones were still clearly visible, bleaching in the sun. This was the burial ground of the last of his tribe.

The giant man was silent as he stooped to pick up one of the skulls. Peering into it, his frame began to shake and his eyes filled with tears as he realized that his destiny had been destroyed.

For the rest of the 70-odd years of his life, Cahoonshee roamed the valleys of the Delaware, Neversink, and Mongaup rivers, searching for some surviving member of his tribe, for some remnant of his childhood. During this time, he tried to be a helpful friend to all he met, serving as peacemaker, rescuer, guide and interpreter as required, but all the while keenly aware that he had been denied his destiny.

And in the many years since his death, settlers in the upper Delaware region have claimed his spirit continues the quest for that destiny, roaming the ever-changing river valleys, searching for the inner peace he had never found in life.

The story of the last of the Cahoonshee, and possibly his spirit, will be part of the Haunted History Lantern Tour at Fort Delaware Museum of Colonial History on Saturday, October 8. The family-friendly event runs from 6 to 9 p.m., and is conducted as a fundraiser for the non-profit history education group, The Delaware Company. Admission is $10 per person or $25 for a family of up to four. Food and drinks will be available, and music will be provided by the River Ramblers. Psychic readings will be offered, as well. Participants are advised to bring their own flashlights, although there will be some for sale onsite.

Fort Delaware is located on the Upper Delaware Scenic Byway at 6615 Route 97 in Narrowsburg.