The Largest and Most Destructive Fire

On October 14, 1899, the imposing Administration Building at the Loomis Sanitarium was reduced to little more than a pile of rubble in less than three hours by a fire the Liberty Register newspaper …

The Largest and Most Destructive Fire 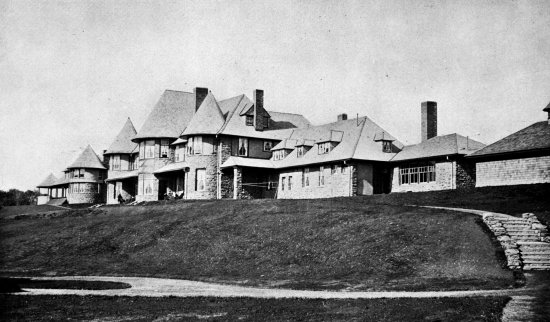 The original administration building at the Loomis Sanitarium burned to the ground on October 14, 1899.
Contributed photo
Posted Friday, October 15, 2021 7:00 am
John Conway

On October 14, 1899, the imposing Administration Building at the Loomis Sanitarium was reduced to little more than a pile of rubble in less than three hours by a fire the Liberty Register newspaper called “the largest and most destructive that ever occurred in this vicinity.”

The building was the crown jewel of the sanitarium when it opened in June, 1896. The massive stone structure had been endowed by J.P. Morgan, and built at a cost of over $60,000 (that’s about $2 million in today’s money). It was by far the most impressive structure in Sullivan County at the time, as large as many hotels and considerably more substantial.

The three-story, 190-foot by 60-foot building, designed by prominent New York City architects Bruce Price and J. Russell Pope, housed the dining room, sitting room, laundry, doctors’ and nurses’ quarters, a pharmacy, and a fully equipped infirmary, as well as the administrative offices. It stood virtually at the center of the original 190 acres, surrounded by several cottages and a casino, its conical turrets dominating the landscape.

That all changed on Saturday, October 14, 1899, when an alcohol lamp exploded in an upper room on the west side of the building. The fire spread so quickly there was little anyone could do to contain it, especially in view of the lack of firefighting apparatus on the property, so all attention was shifted to the safe evacuation of people and the removal of as much personal property and equipment as possible.

Firefighters from Liberty’s Hallock Hose Company eventually arrived on the scene, and with the aid of several hundred feet of garden hose and some buckets were able to keep the blaze from spreading to the surrounding buildings.

While much of the loose furniture and some equipment was salvaged, nothing remained of the building but the stone walls and chimneys. The boiler, generator, and electric light plant were also housed in the building, and were all destroyed.

“Carpenters are now at work erecting temporary quarters for the nurses rendered homeless by the fire, and by morning they will be completed,” the New York Times reported the next day. “Preparations will begin at once to rebuild the burned structure.”

In a front page story in its Friday, October 20 edition, the Register not only reported on the fire, but took time to discredit the accounts of the incident reported in “some of the New York papers.”

“With rare skill [they] have succeeded in garbling their stories of the fire to an extent that has succeeded in completely disguising the principal facts,” the Register reported. “Many reflections on the institution and the citizens of the place have also been made that have no foundation whatever.”

The Register specifically cited reports that residents of the Sanitarium were interfering with firemen and trying to provoke them and that the roads to Loomis were blocked off with ropes as being completely fabricated.

Alfred J. Sweeney, Manager of the Liberty Light & Power Company immediately set up emergency power for the remaining buildings. Sanitarium officials, meanwhile, were concerned with raising funds to rebuild, and to repair the nearby Sloane cottage, which had also been damaged. The remaining eleven cottages, including the residence of physician in charge Dr. J. Edward Stubbert, who was in Europe at the time, had escaped unscathed.

The cost of a new administration building was estimated at about $100,000. Insurance covered about half that. With the help of generous donations, most notably by J.P. Morgan, the structure was quickly rebuilt. Designed by the prominent architectural firm of McKim, Mead and White, the new building was even more impressive than the first. Although the overall configuration remained basically unchanged, the Victorian turret style was replaced by a distinctive half-timbered Tudor exterior.

Permanent lines had been erected from the Liberty Light & Power Company to provide electric for the entire facility, so the original power plant was not replaced. But purchasing the power was an added expense the sanitarium could ill afford, so Morgan came up with an innovative solution, eventually buying the Liberty power company on behalf of the facility.

Sanitarium officials were ecstatic. Not only would the gift save them the expense of purchasing their power, it would provide the facility with a steady income. The sanitarium used roughly the same amount of electric power as the rest of the area served by the plant.

Dr. Stubbert was named president of the new light company, and Morgan gifted one share of stock to James Chandler Young, who attended the shareholders meetings in Morgan’s Manhattan offices as a representative of the Village of Liberty.

The Narrowsburg Farmer and Abraham Lincoln