Story and photos by Matt Shortall The Trail Towns Conference opened at the Michael Ritchie Big Barn in Hurleyville on Thursday evening. Hosted by Sullivan Renaissance and the Sullivan O&W Rail … 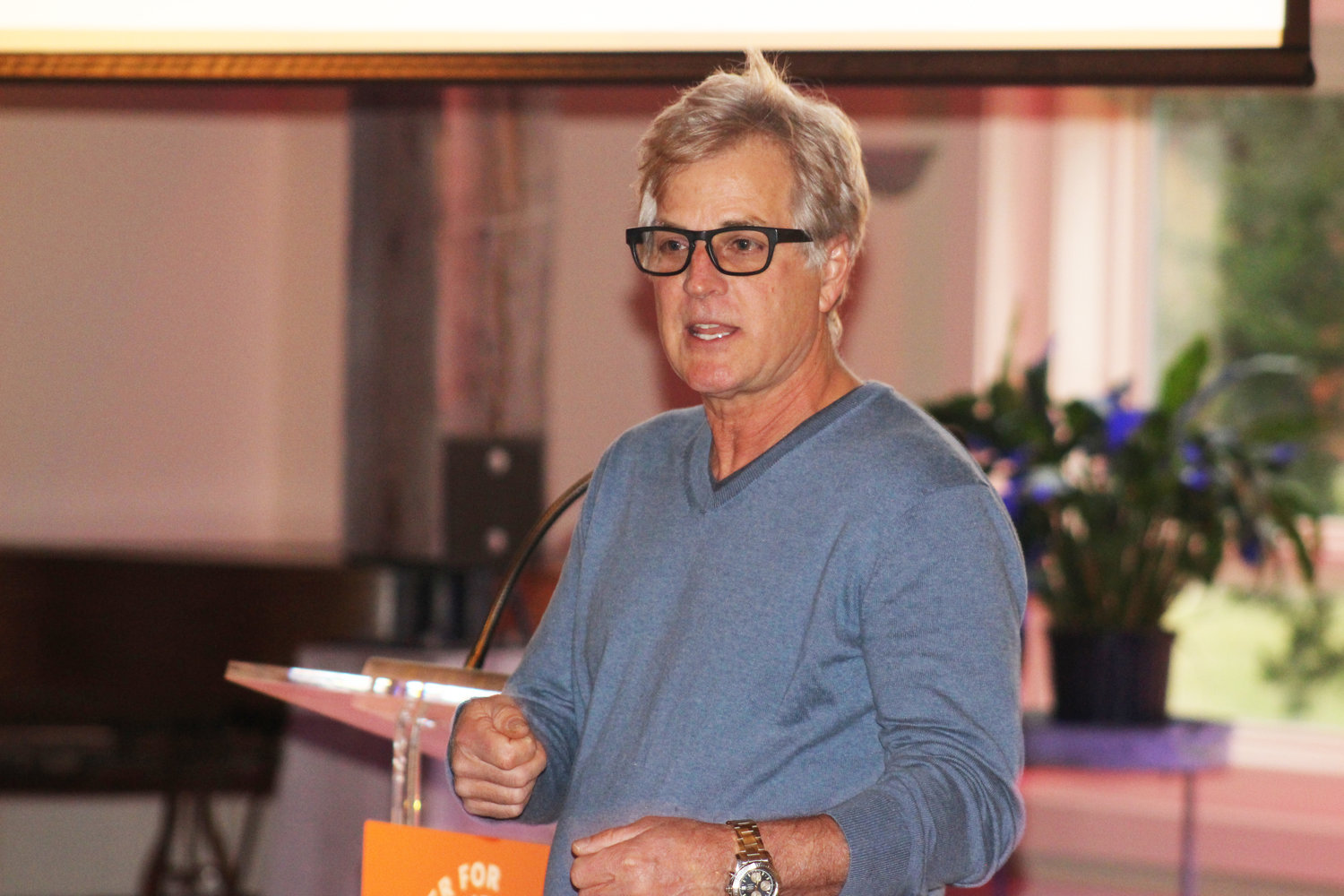 David Kahley, President and CEO of the Progress Fund, explained how his nonprofit organization has helped benefit businesses and communities along the Great Allegheny Passage.
Matt Shortall | Democrat 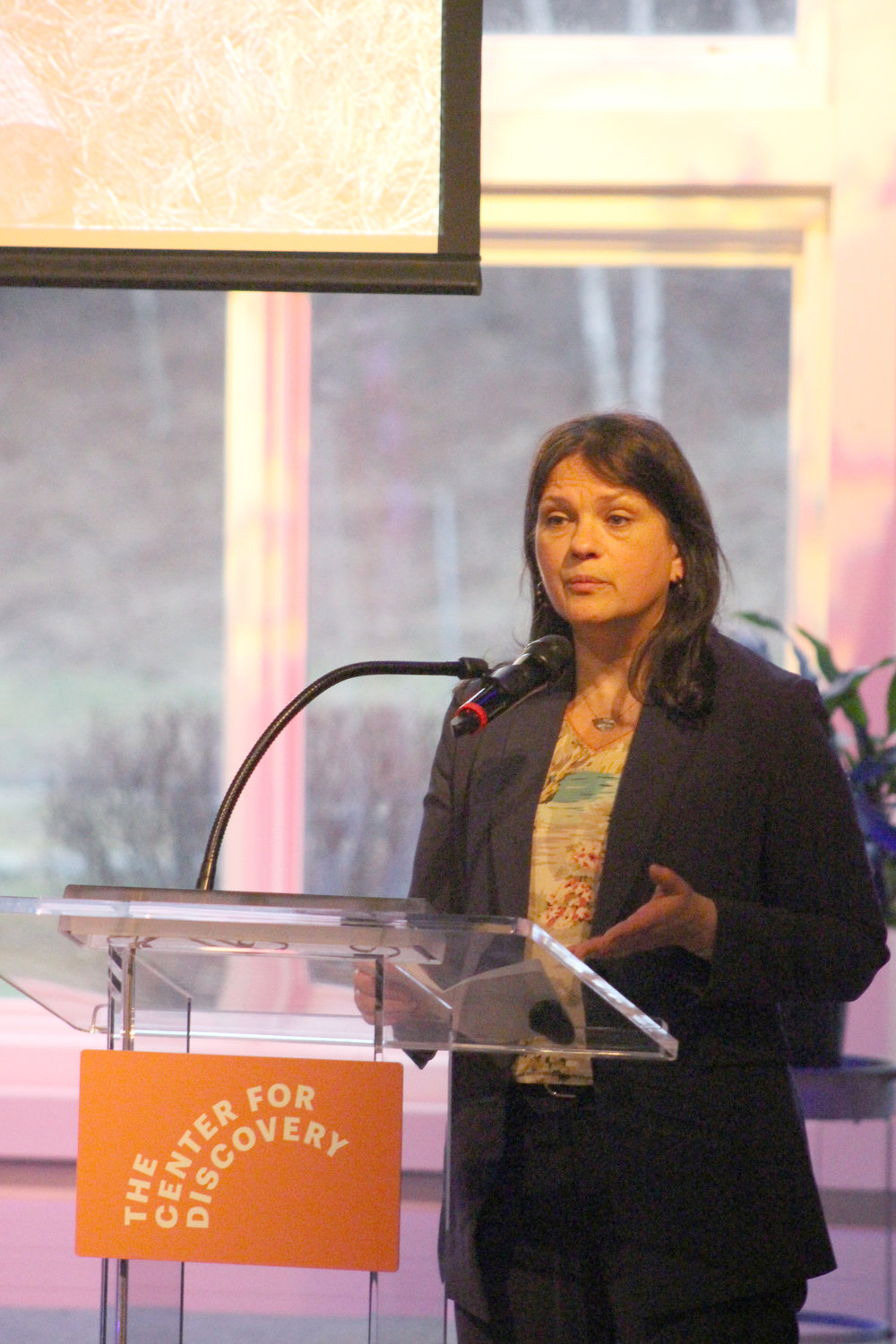 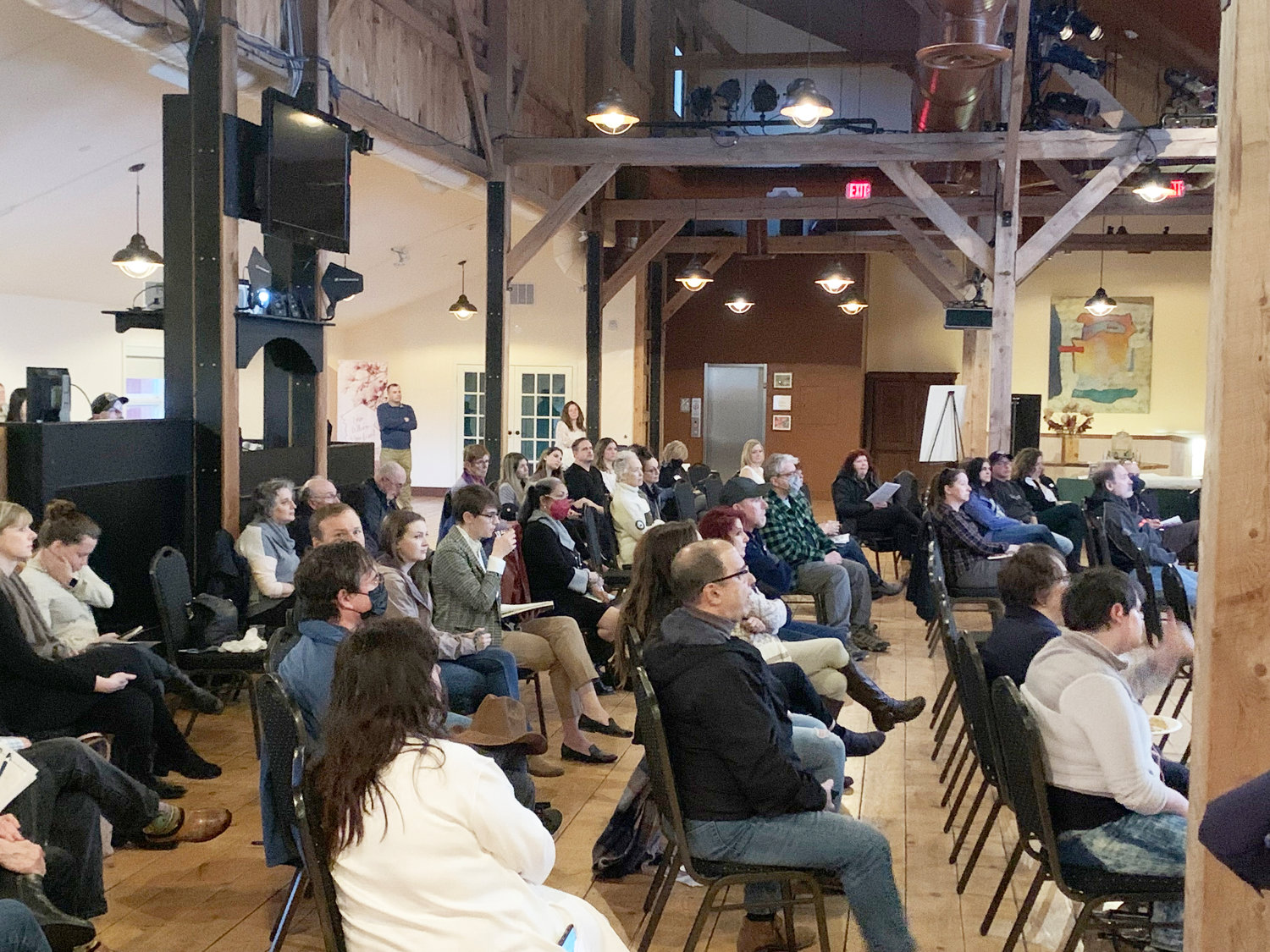 Attendees at the Trail Towns Conference in Hurleyville on Thursday listened to how local communities could benefit from trail development.
Matt Shortall | Democrat 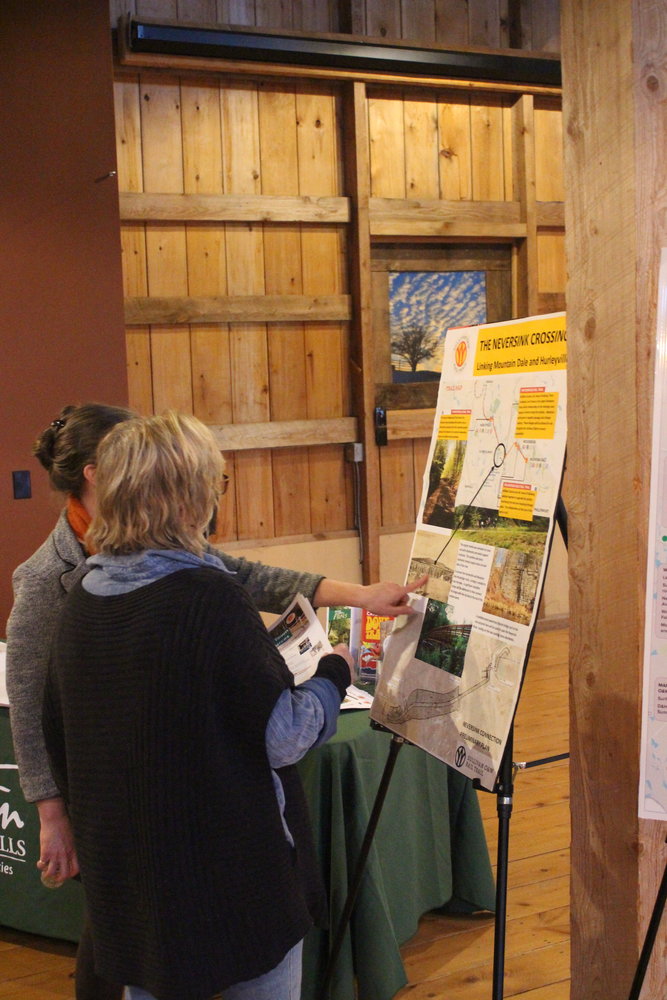 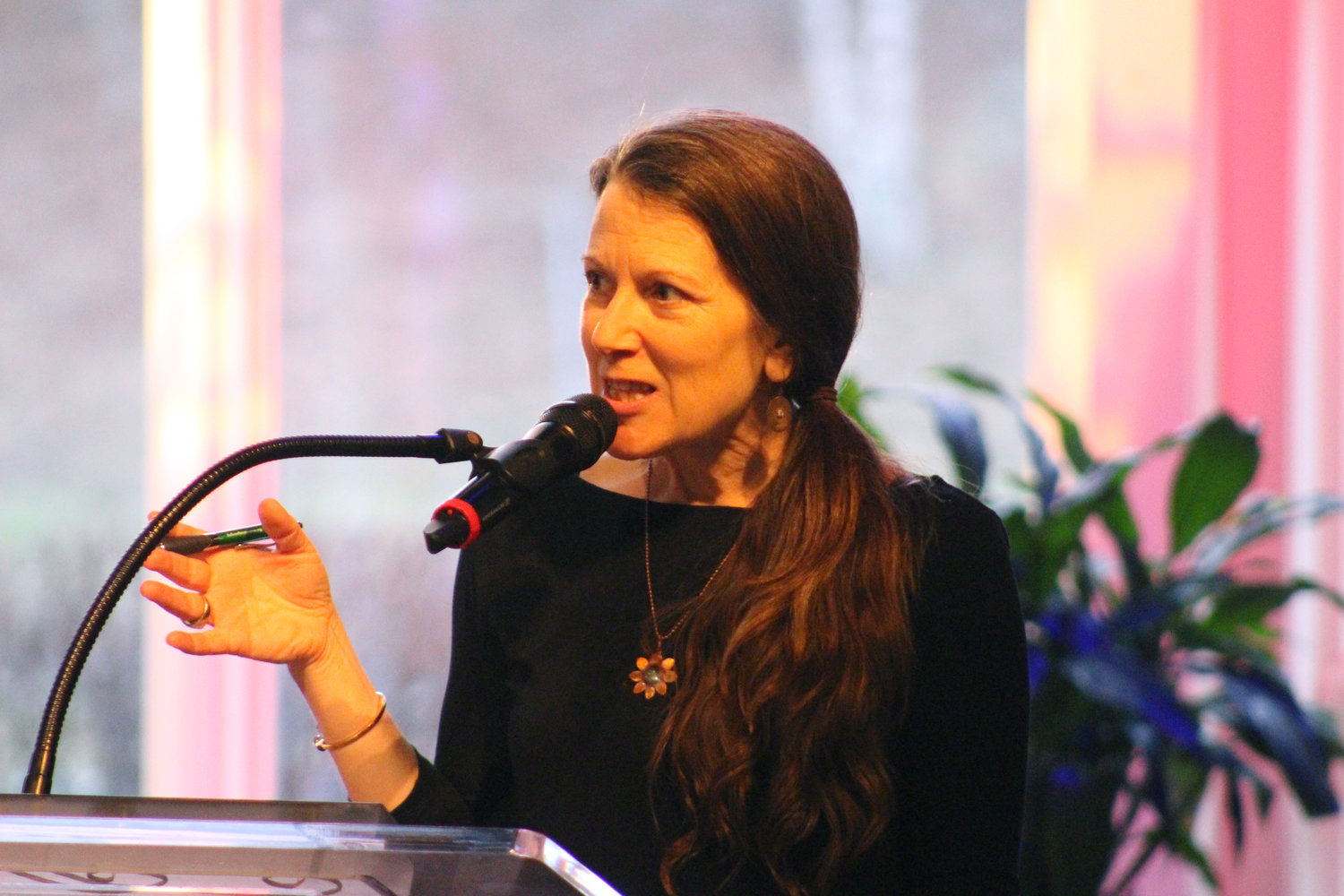 The Trail Towns Conference opened at the Michael Ritchie Big Barn in Hurleyville on Thursday evening. Hosted by Sullivan Renaissance and the Sullivan O&W Rail Trail Alliance, the two-day conference aimed to help local municipalities and businesses make the most of the recreational and financial potential offered by the rail trails that run through their communities.

Denise Frangipane, Executive Director of Sullivan Renaissance, thanked all of the individuals and partnership organizations that helped make the conference possible as she welcomed attendees on Thursday evening. “The trail effort in Sullivan County is not new, but it has picked up incredible momentum,” Frangipane said.

Freda Eisenberg, Chair of the Sullivan O&W Rail Trail Alliance, explained how their ultimate goal is to connect all the rail trails across Sullivan County into one continuous 50-mile trail running from Mamakating to Livingston Manor in the Town of Rockland. When complete, the trail would link 11 hamlet and village centers. An additional O&W spur line runs from Monticello down to Port Jervis, but no rail-trail development has yet occurred in this area.

“It’s a lot for the county,” Eisenberg said. “It’s a big and long-term effort.”

Thursday’s keynote speaker was David Kahley, President and CEO of the Progress Fund. Based out of Greensburg, Pennsylvania, this nonprofit community development organization provides financing and business coaching in trail communities along the Great Allegheny Passage.

Covering 150 miles, the Great Allegheny Passage (GAP) takes visitors on a biking and hiking adventure from Pittsburgh to Cumberland, Maryland and through Pennsylvania’s Laurel Highlands.

In 2007, The Progress Fund helped develop the concept of Trail Towns and then launched the Trail Town Program.

“We’re the first nonprofit that I know of that said we’re going to use trail users to generate economic development in small communities that don’t have many other options.” Kahley explained.

According to Kahley, the GAP attracts over one million visitors a year and trail users spend some $74.7 million at local businesses along the way.

“They support about 1,400 jobs, which is pretty good for rural western Pennsylvania which is not very different from where we are here,” Kahley said.

Kahley said he thought Sullivan County has “the bones to have a beautiful trail network, but what you have right now are a lot of segments.”

By connecting the segments, improving trail quality and adding uniformed signage, the hope is to draw crowds of people who will hit the trails and spend money in the communities along the way.

“It took 21 years for the GAP to be built,” Kahley said, emphasizing that trail planners have to take a long view.

Eisenberg said that just that afternoon, county legislators had authorized a contract to start design for a bridge over the Neversink river which would connect the Mountaindale/Wood-ridge trail with the trail in Hurleyville.

“That’s the first start. We have a lot more work to do,” Eisenberg said.

Taste of the trail towns

Attendees at last week’s conference enjoyed food and refreshments from some of the restaurants and eateries in Sullivan County’s trail towns.

“Taste of the trail towns,” included beer from Catskills Brewery in Livingston Manor, Pasta D’oro in Wurtsboro, Forage and Gather Market in Mountaindale, The Hurleyville General Store, La Salumina and the Pickled Owl all from Hurleyville.

There was also the New Munson Diner and the Star Bar and Grill from Liberty. Thursday featured GiGi JAVA from Wurtsboro and Gombo’s Bake Shop in South Fallsburg.