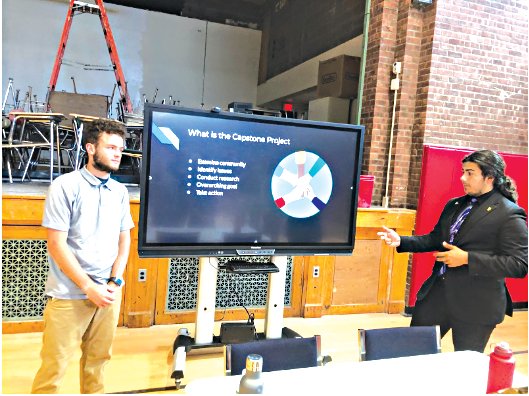 Armaan Butler (right) and Andrew Shultz in the middle of their extremely thorough presentation, describing the NARCAN training, and thanking those that helped get them involved.
Matt Festa | Democrat 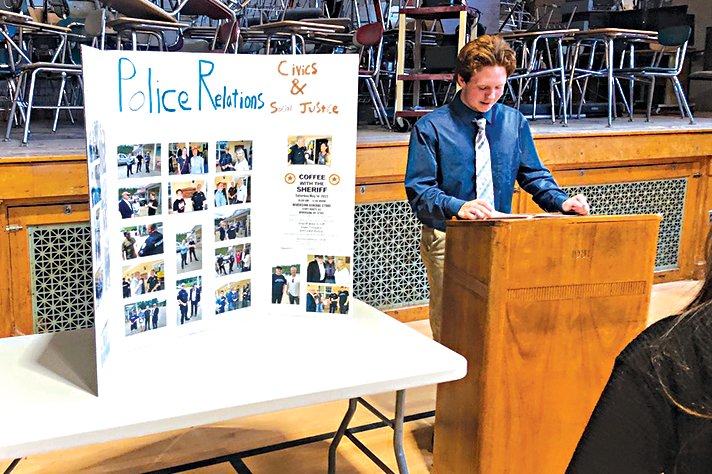 Connor Rafferty brought a very charismatic tone to his speech about Police Relations, and reminisced about the Coffee With the Sheriff event he recently organized at the Neversink General Store.
Matt Festa | Democrat 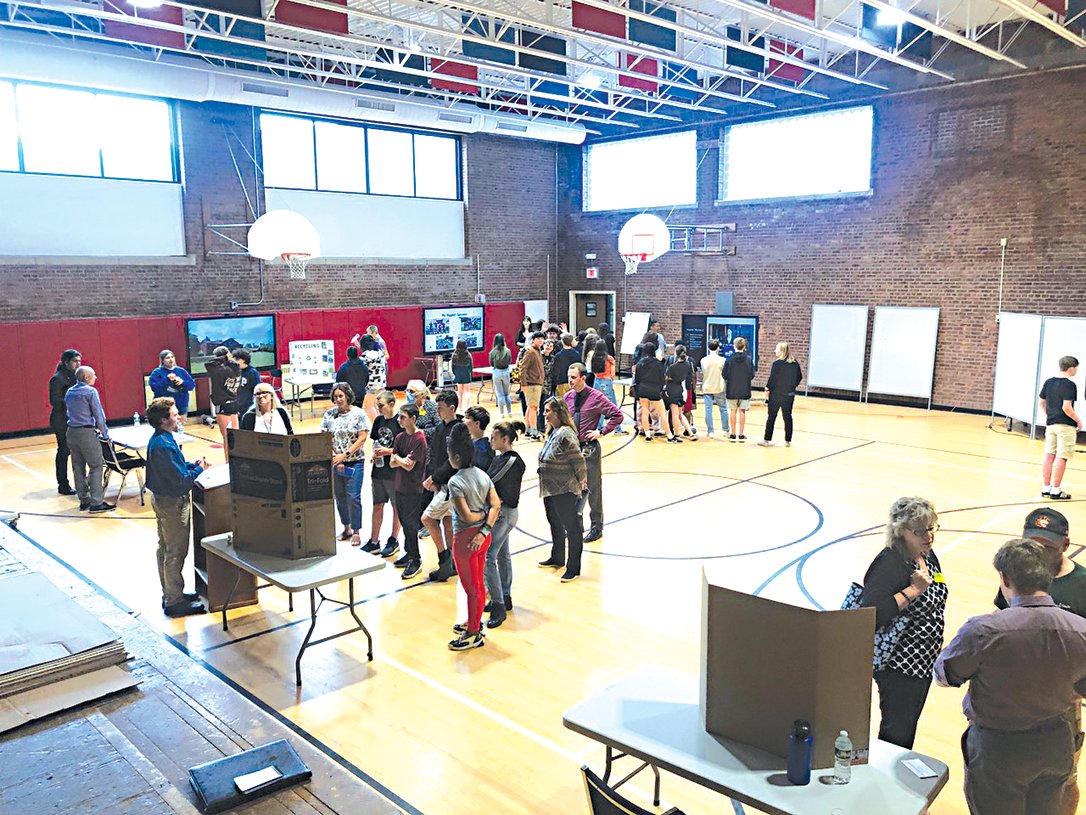 Every presentation has an audience. Fellow students, teachers, and locals gather to see what the Civics and Social Justice class have done to help the community they’re all part of.
Matt Festa | Democrat
Previous Next
Posted Friday, June 17, 2022 6:10 am
By Matt Festa

GRAHAMSVILLE –– Students from Tri-Valley Central School District’s new Junior/Senior Civics and Social Justice class, taught by Matt Haynes and Tyler Eckhoff, displayed the skills they acquired from the course during a Capstone Project Showcase last week. At the event, they discussed their community projects and actions taken to better the community around them.

Held in the school’s upstairs gym, peers and generally curious locals were able to walk around, picking and choosing what topics drew their interest the most. As crowds gathered, the students performed a speech about their service, complimented by a slideshow or a tri-fold display board.

Despite the small size of the class, there was a broad variety of topics to observe. Ten students explored several issues like poverty, recycling, mental health and more. There were nine presentations in total.

One of many highlights the gathering offered was Brandon Shultz and Armaan Butler’s partnered project, which discussed the opioid epidemic. When asked about what made them choose their topic, Butler said “A couple years ago, I volunteered with Ellenville Regional Health for opiate awareness and I had learned about NARCAN then.”

NARCAN, or Naloxone, is a medication designed to rapidly reverse an opioid overdose.

With both of their mothers in the local medical field, they had prior knowledge of the opioid crisis, and wanted to “start a small ripple in our community that’s hopefully going to expand.”

Shultz and Butler described the research they needed to host a NARCAN training in the school, while also attempting to convince small businesses to do the same for their employees. They commended Haynes and Eckhoff for setting up interviews with important public figures, as well as some of those figures themselves.

“Throughout the year, we were able to interview people from all walks of life, from congressmen to [members of law enforcement]…So for the first few months of the class, we were able to build these connections, which is how we got introduced to the two people that helped the NARCAN training the most; Jill Hubert Simon and Janna Walter from Sullivan County Public Health, ” Shultz said.

Eckhoff and Haynes were able to break the class down into three units. The first was identifying what injustice is according to governing documents in different communities. The second was about discourse, and learning how to respectfully disagree, which was supported by in-class debates between the students. Finally, the third was different forms of activism, and what it actually means to take action.

The initial incentive of starting this class was to be able to offer The Seal of Civic Readiness, which is a pilot program that would display proof of their prestige on the student’s diploma, but that wasn’t the only motivation. Eckhoff mentioned how he always liked classes that taught skills the students can bring into life. Haynes added that they were probably going to do the class regardless of whether or not they were accepted for the Seal.

They were very transparent with the District’s Board of Education (who they thanked for their support of the class), the students, as well as the guest speakers, in terms of what the class was about.

“The reality is the world is changing, and there are issues out there that need to be talked about,” Haynes said. “You can’t sweep things under the rug and pretend like they don’t exist.”