CALLICOON – For the second time in thirty years, a house has been hit at the bottom of Fremont Street in Callicoon. 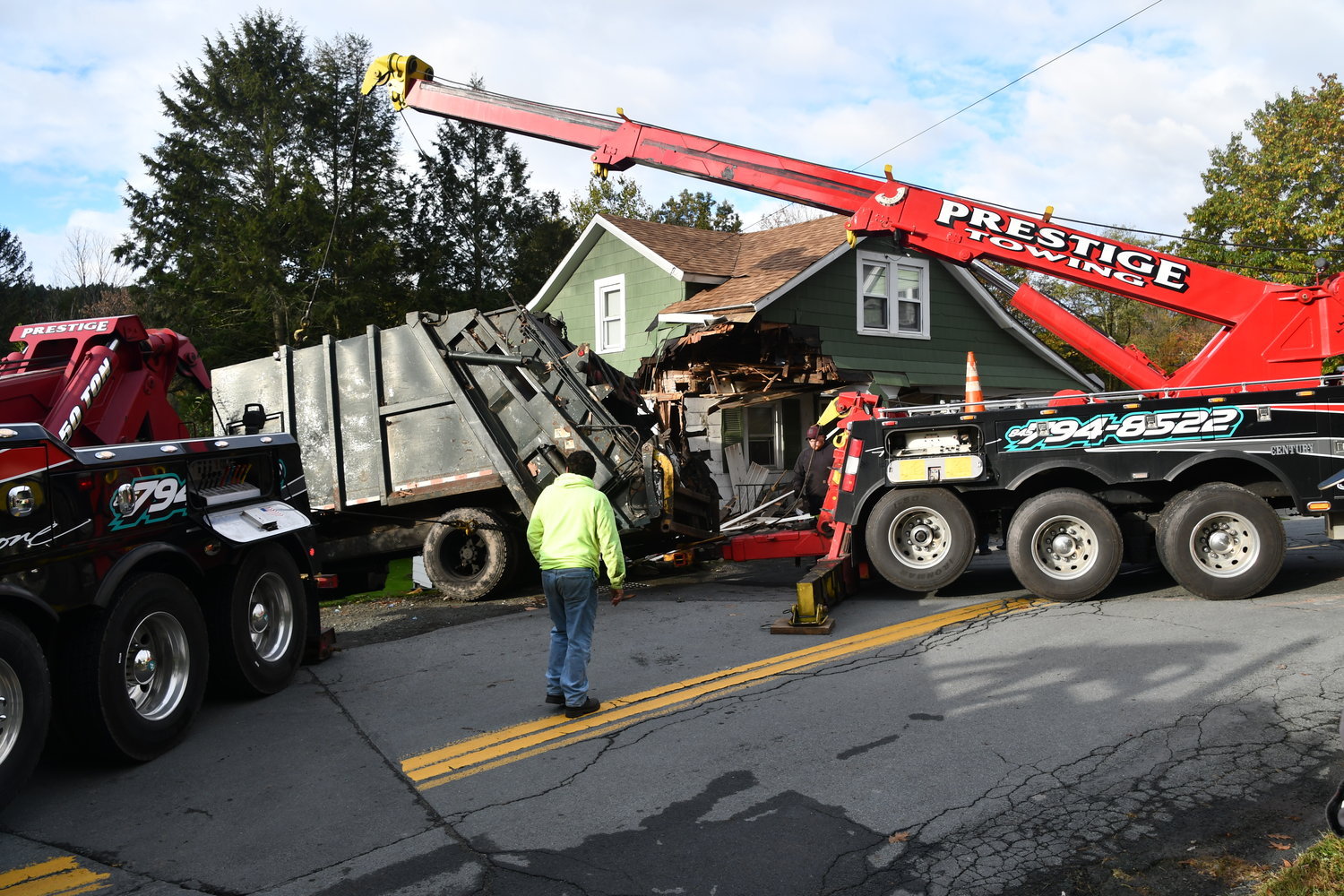 As the driver of the garbage truck looks on, workers from Prestige Towing remove the vehicle from the side lawn of Brian Sykes’ house at the bottom of Fremont Street in Callicoon. Some of the damage to the home can be scene.
Fred Stabbert III | Democrat 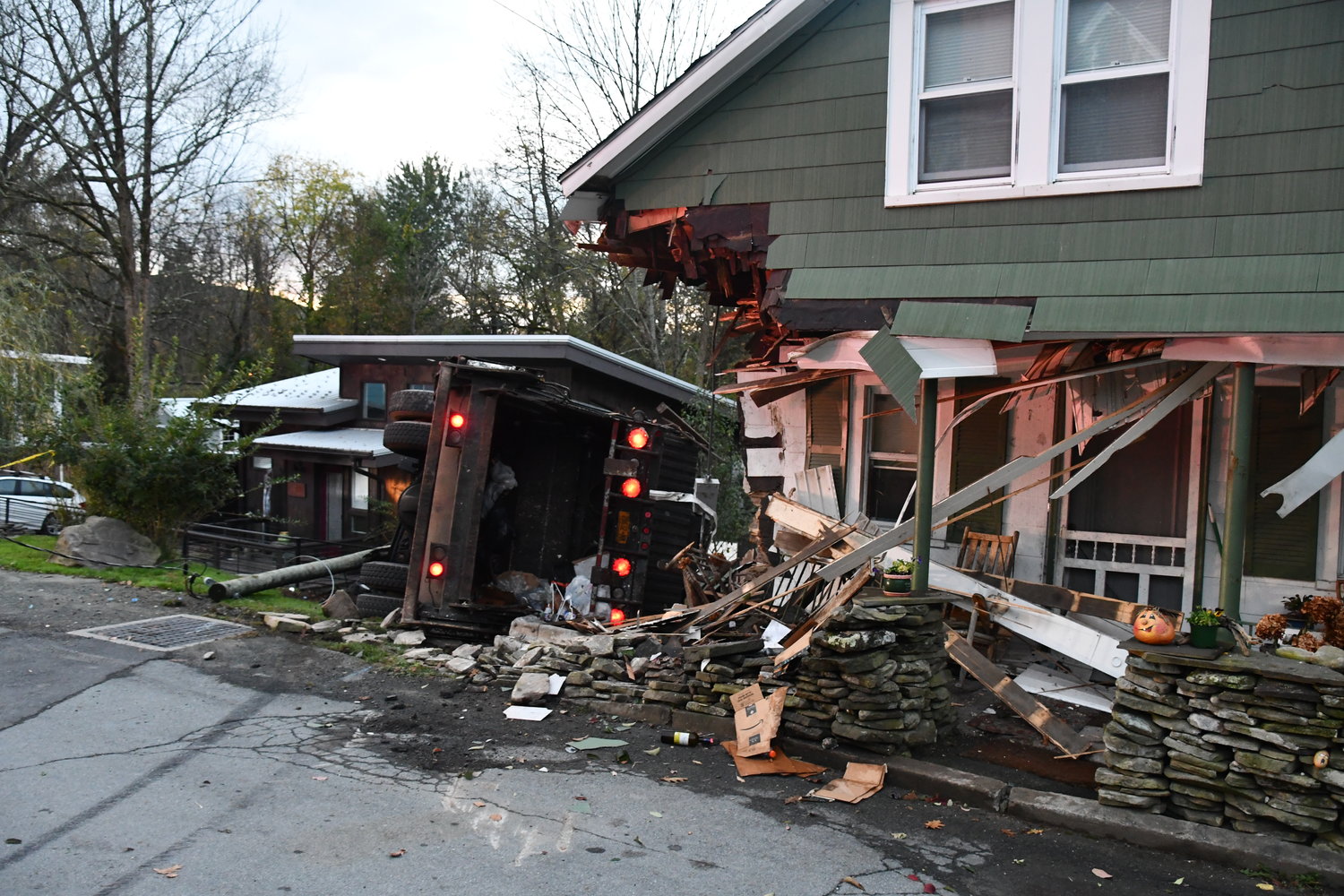 This was the scene at 7a.m. yesterday morning as a garbage truck overturned after hitting a house in Callicoon. No one was seriously injured in the truck or the house.
Fred Stabbert | Democrat 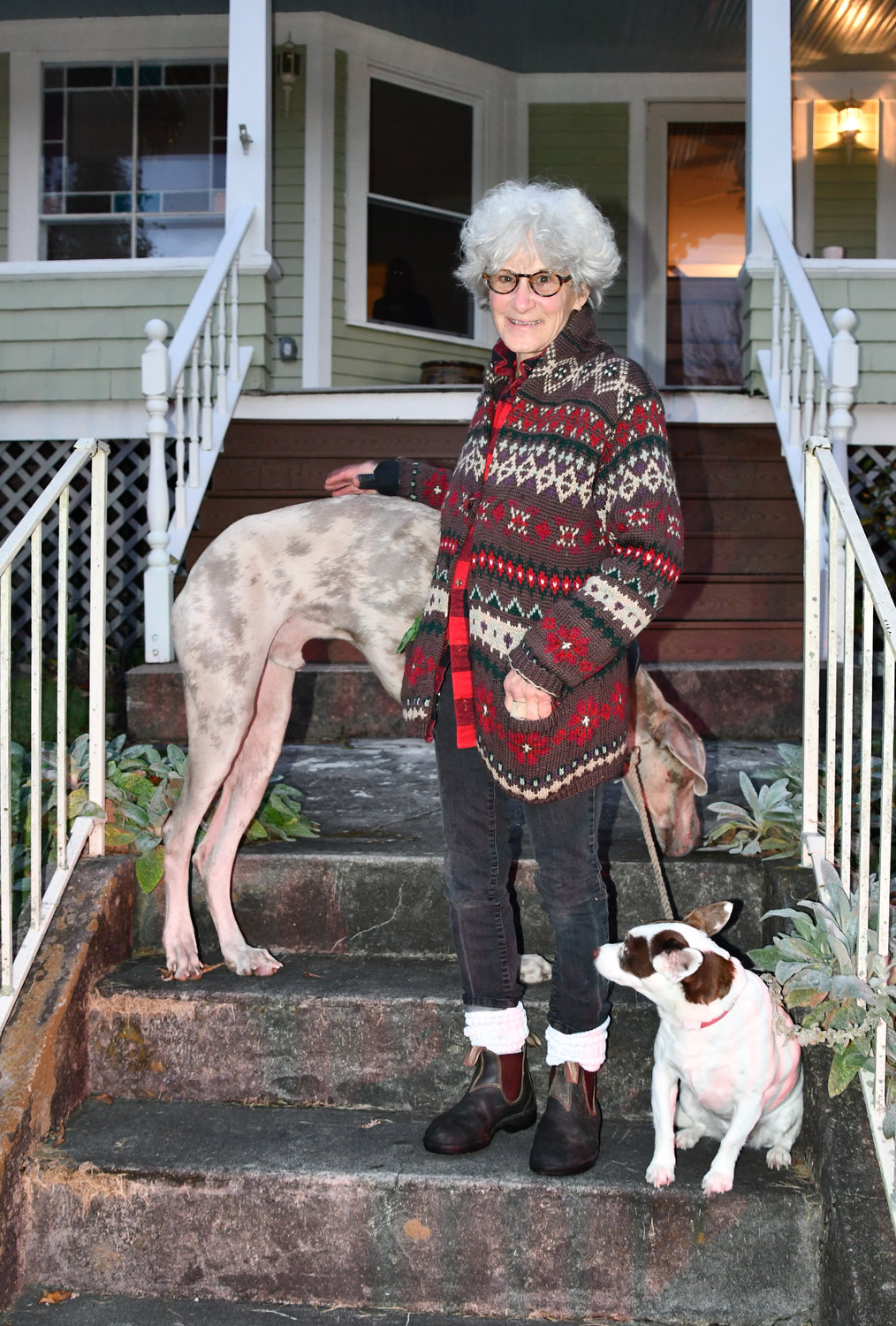 Neighbor Victoria Lesser and her two dogs went across the street after the accident. The truck stopped just 20 feet from Lesser’s house.
Fred Stabbert III | Democrat
Previous Next
Posted Tuesday, October 19, 2021 6:22 am
By Fred Stabbert III

CALLICOON – For the second time in thirty years, a house has been hit at the bottom of Fremont Street in Callicoon.

At 6 o’clock yesterday morning, a Thompson Sanitation truck, making its usual Monday morning pick-ups, lost its ability to slow down as it was descending the hill and went careening down one of the steepest streets in Callicoon.

The driver, Carmine Quagliariello, said he tried to slow the truck down by hitting mailboxes and going up on several lawns, but couldn’t stop the truck.

The truck just nicked a utility pole on the upper side of the street before it struck the home at the bottom of the hill and crashed through a utility pole, overturning and coming to rest on its passenger side.
Both the driver and his passenger, Clifford Turner, were slightly injured.

“I had my seat belt on,” Turner said.

Turner slightly injured the right side of his face while Quagliariello was transported to Garnet’s Grover Hermann Division in Callicoon with non-life threatening injuries.

He was treated and released and returned to the scene several hours later.

Quagliariello said he was so happy no one was hurt and he sometimes saw the house’s owner, Brian Sykes and his dog, having coffee on the front porch when he went through.

The house sustained considerable damage to its front porch and left side.

Sykes was awake at the time of the crash and said it was still dark out when it happened.

The Callicoon Fire Dept., which was called out at 6:16 a.m., responded in full force.

Chief Willie Maxwell said, “It was about 31 years ago – I had just joined the fire department – when the first crash took place right here.”

Sykes’ neighbor, Victoria Lesser, stood across the street surveying the scene in disbelief.

Lesser owns the home next to Sykes and it was on the property which she now lives that the first garbage truck destroyed that house on Friday, June 15, 1990.

“When the designer built my home he said, ‘put your house back there,’” Lesser said.

She was happy she did. The truck stopped within twenty feet of hitting her house.

Lesser said she heard a loud crash and thought lightning had hit the house.

She immediately lost her electric and her generator kicked on. When she realized what had happened she quickly evacuated her property with her two dogs in tow. She said her propane tank was on the side of the house where the accident took place.

As she stood across the street looking at the scene she said, “They [the driver and passenger] were incredibly lucky, both of them.”

New York State Police re­sponded to the scene and troopers said the investigation is ongoing.