When the dust settles

Wildcats and Blue Devils battle until the final buzzer

LIVINGSTON MANOR – After a postponed matchup in December, Livingston Manor and Roscoe finally met on the court for the first time since parting ways at the end of football season, when …

When the dust settles

Wildcats and Blue Devils battle until the final buzzer 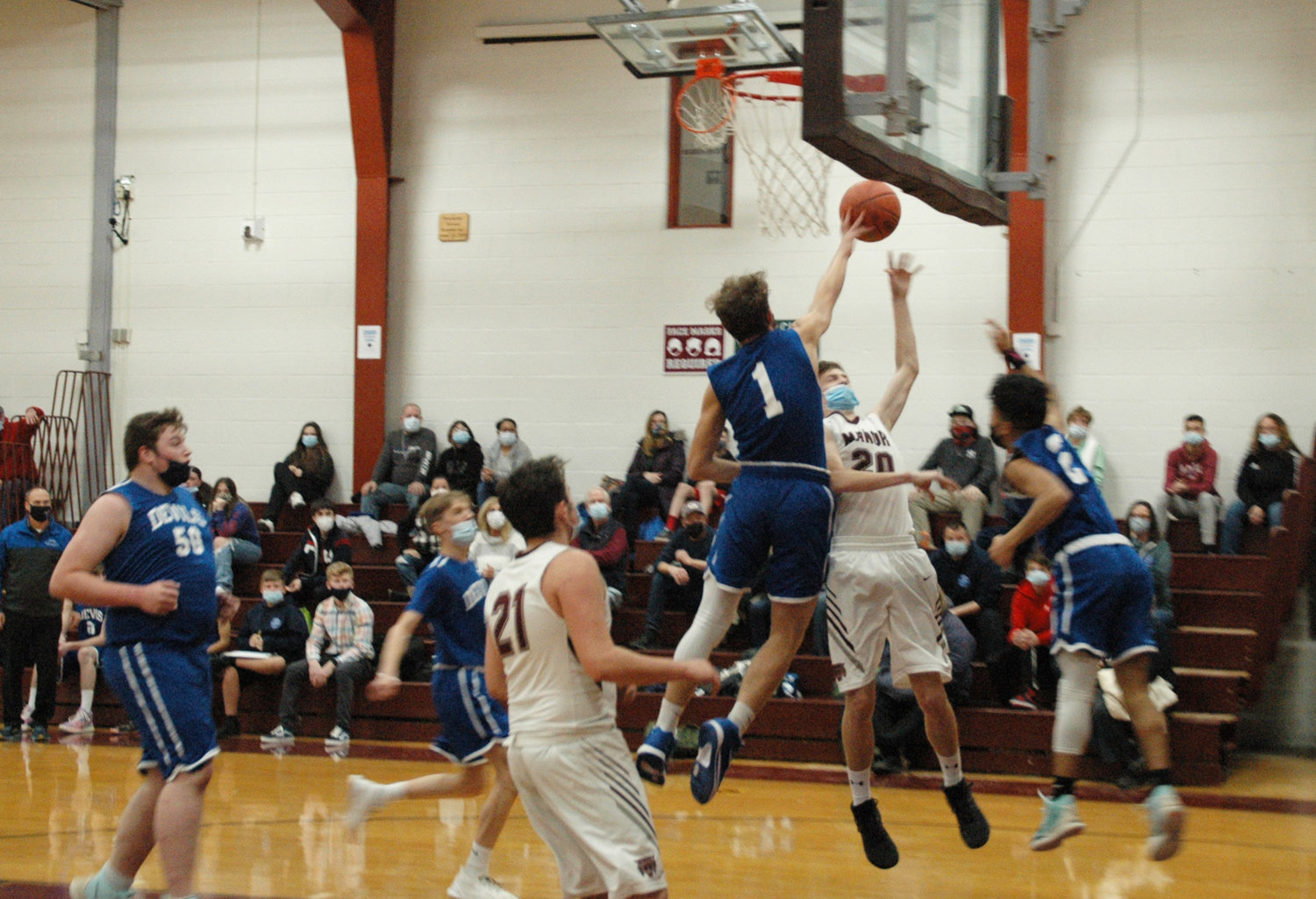 Defense on display! After Alaniz Ruiz (2) chased down a fast break layup and tipped it, Anthony Teipelke (1) followed closely behind to ensure that the ball would not reach the rim.
Anthony Morgano | Democrat 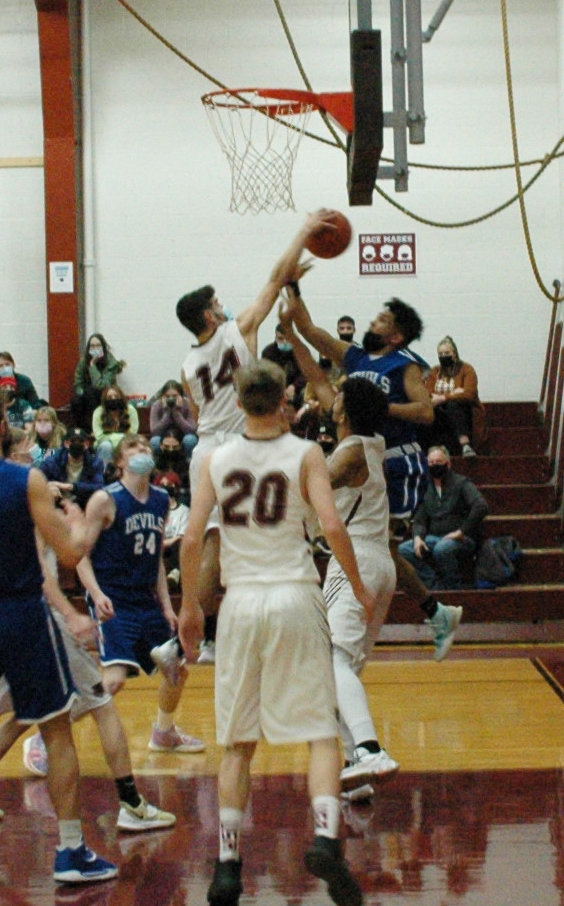 Both teams displayed stellar defense throughout the game, with Joseph Gould denying an Alaniz Ruiz layup on the other end of the court.
Anthony Morgano | Democrat 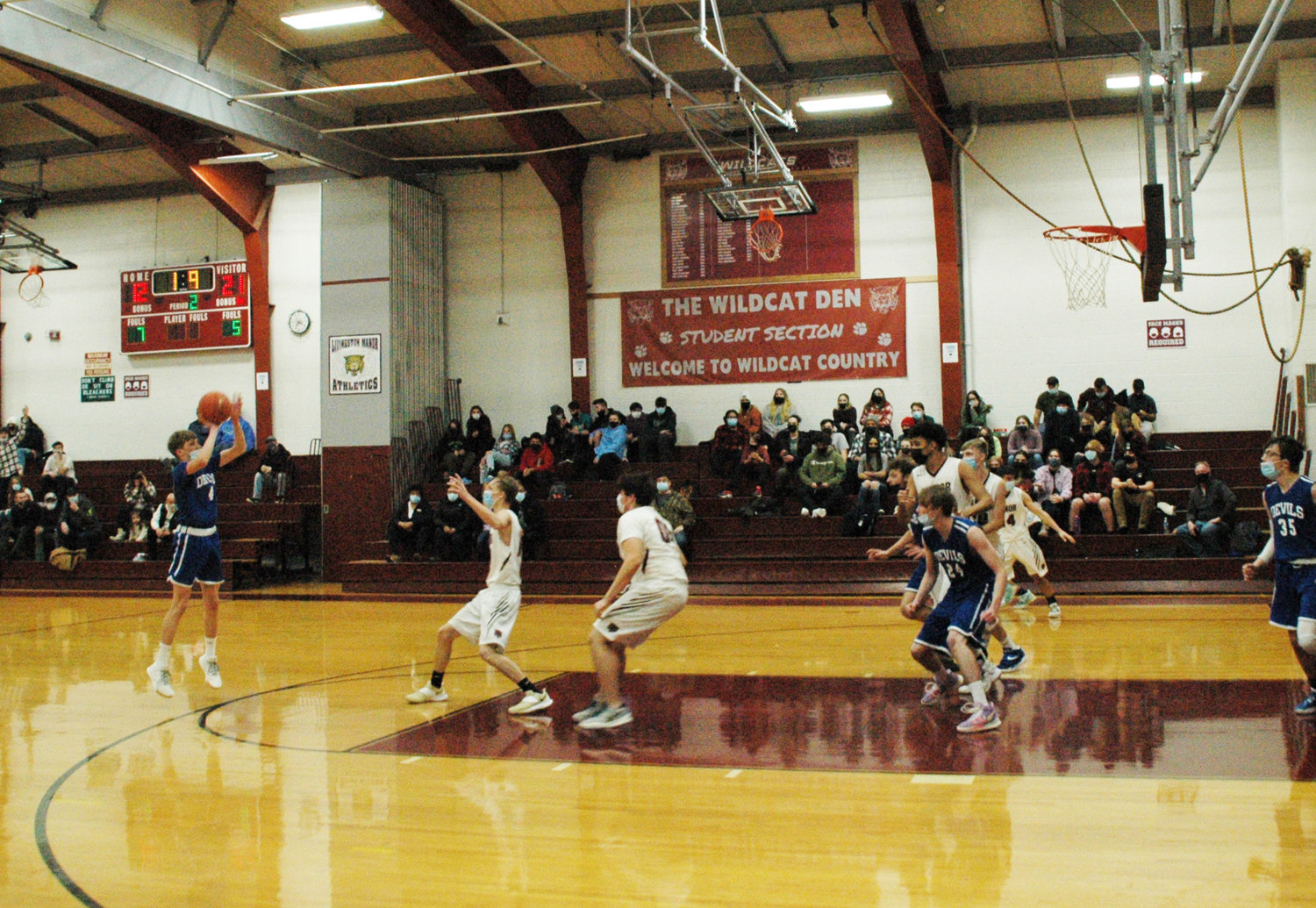 Ben Ackerly fires off a 3-pointer at the buzzer, knocking it down to give Roscoe a 12 point lead heading into halftime.
Anthony Morgano | Democrat
Previous Next
Posted Friday, January 14, 2022 6:40 am
Anthony Morgano

LIVINGSTON MANOR – After a postponed matchup in December, Livingston Manor and Roscoe finally met on the court for the first time since parting ways at the end of football season, when Roscoe, Livingston Manor and Downsville all team up on the gridiron. These two groups of friends held nothing back, pushing the pace of the game to the peak for the fans. The fourth quarter was rife with lead changes, turnovers, points and clock management, but when the final buzzer sounded, it was Roscoe that stood victorious, defeating the Wildcats 45-43.

The rivalry between Livingston Manor and Roscoe has evolved in recent years, leaving behind the bitterness and replacing it with a much more clean, friendly matchup. The teams play competitively, and respect each other, making for a much different, but better, atmosphere.

Roscoe’s trip to Livingston Manor on Tuesday marked their eighth straight game on the road, having yet to perform in front of the home crowd, but you would never know from the sea of blue that shows up each game to support them. Manor’s fans packed the opposite set of bleachers, with their student section bringing energy throughout the night.

The game got off to a slow start, defensive exchanges between the two schools kept the score knotted at 0, until Roscoe got a few shots to fall to take a 4-0 lead. Manor quickly took a timeout to adjust on the fly and get their offense going, which worked to an extent, but by the end of the first quarter Roscoe led 10-5. Anthony Teipelke, who led the Blue Devils with 15 points, netted six of Roscoe’s first quarter points and jump started their offense.

In the second quarter, the teams had only exchanged one basket each at the four minute mark. The two teams traded baskets as the half was coming to a close, but a late 8-1 run by the Blue Devils gave them a 21-12 lead in the final seconds of the half. Having possession for the last shot, Blue Devil guard Ben Ackerly fired off a 3-pointer at the buzzer that rattled home and gave the Blue Devils a 24-12 lead at the halfway point.

Perserverence was a key for the Wildcats, who after making the necessary adjustments during halftime came out firing on all cylinders in the 3rd quarter. The Wildcats outscored the Blue Devils 17-6 in the third quarter, trailing by just one point. However, at the buzzer, a Wildcat defender fouled Matt Hogan, sending him to the free throw line with three chances to extend the Roscoe lead. Knocking down two of three, Roscoe took their 32-29 lead into the fourth quarter break, desperate to slow down the Wildcats.

Roscoe struck first in the final frame, briefly extending their lead to five points before Livingston Manor would score to get back within three. The two teams exchanged shots, Roscoe trying to pull away with the win while Manor continued to knock on the door. The Wildcats tied the game at 36, and again at 38, but still had not had their first lead of the night, until a 3-point attempt by Nathan Bowers gave the Wildcats a 41-38 lead.

Trailing for the first time in the game, Roscoe quickly scored two baskets to re-take the lead 42-41. Then it was the Wildcats, 43-42, and back to Roscoe 44-43. As the game neared its conclusion, Roscoe netted a free throw to extend their lead to 2-points, but with 23 seconds to go, Livingston Manor had plenty of time to tie.

On the ensuing possession, a flash of outside pressure by the Blue Devils caused the Wildcats to throw the ball away, giving Roscoe possession and forcing Livingston Manor to foul on the inbounds. The Blue Devils had to get four separate inbounds plays off before they earned a trip to the line, where Alaniz Ruiz would miss his free throw with just a few seconds remaining. Anthony Teipelke snatched the rebound and escaped the defenders to seal the game, and the first division win, for the Blue Devils.

Branches of the tree